Save the Community Center – Early April 2022

On a rainy Wednesday afternoon, the Community Center Leadership Group gathered to evaluate samples of replacement building materials.  As restoration goes forward, the goal is to keep the Community Center’s look and feel  period-appropriate and to ensure colors blend and are attractive.  In this photo are Josie Hones, Terry Luedecking, Mike McKay, Meredythe Hill VanDusen, and Ann Swain.  Terry chose the colors when the house was painted upon arrival at the County Park. Other Leadership Group members include Mick Thorrez, Jaimie Mercer Thomson, and Flip Reynolds who were unable to attend.  Not pictured, Rick Belcher. 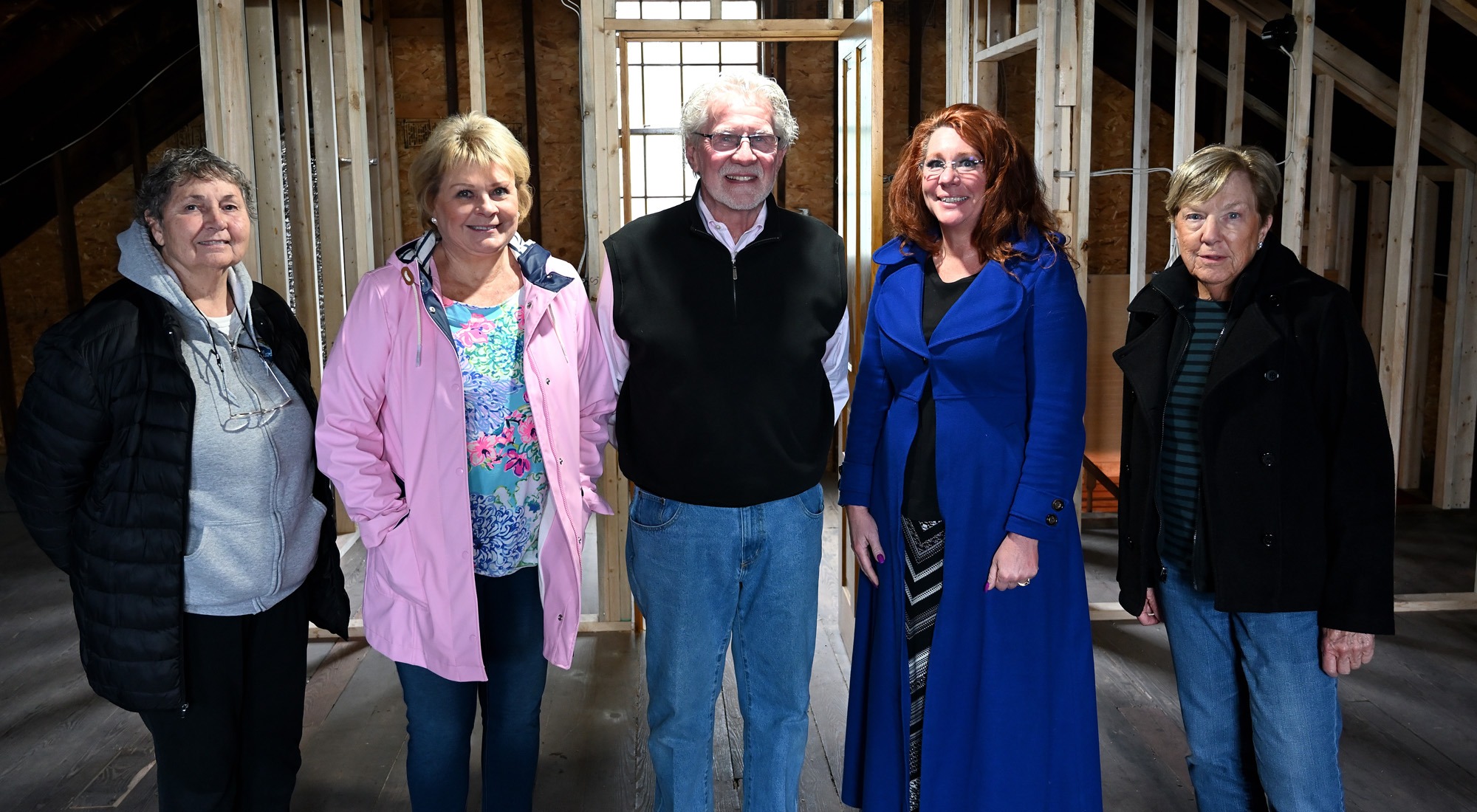 In 1967 Carlotta Graziani Wilson wrote about her family at Clark Lake and the Kentucky Point cottage which later became the Community Center.  In a piece you can read on this website, she describe the layout:  “On the second floor, there were four lovely bedrooms and on the third floor were the servant’s quarters with also four bedrooms.”  Work has started in what was once the servant quarters—the third floor attic.  Why start with attic?  Over the years, bats and other critters colonized it.  In the video, Mike McKay describes early improvements.  The attic will become storage for the Garden Angels, Raft-O-Rama, Spirit Trail, Clark Lake Spirit Foundation historical documents, and other lake organizations.  Currently rakes, shovels, tools, event equipment, file cabinets, and paperwork are stored all over the house.

Because this video centers around the attic, don’t think the work stops at this early phase.  Mike explains the restoration process is starting in the attic and will work its way down.

Insulation was installed on Thursday and Friday.  The last two photos in the slide show illustrate progress as of Friday afternoon (Apr 8).

A year ago, a list of areas requiring work was compiled.  Since then, costs have been rising substantially.  Because of that, advancing quickly is a priority.

Clark Lakers are showing their love for this iconic structure.  They have contributed generously, allowing work to proceed as fundraising continues.  Donations are welcome by check, mailed to PO Box 224, Clark Lake, MI 49234, or by credit card through this website.  Those who have contributed $100 or more will be recognized on a large wall display.  The display will become a permanent part of the house and Clark Lake history.  If you have already donated, how would you like your name(s) to read?  Please email specifics to ClarkLakeSpirit@gmail.com if you haven’t done this yet.

The restoration is also being supported through in-kind donations.  M-R Builder has committed $10,000 to the project, taking the form of labor and expertise.  Below are Rob Alldaffer of M-R Buildier, Mike McKay, and Tim Heim of Chelsea Lumber.  As the group evaluated materials, Rob and Tim answered questions. 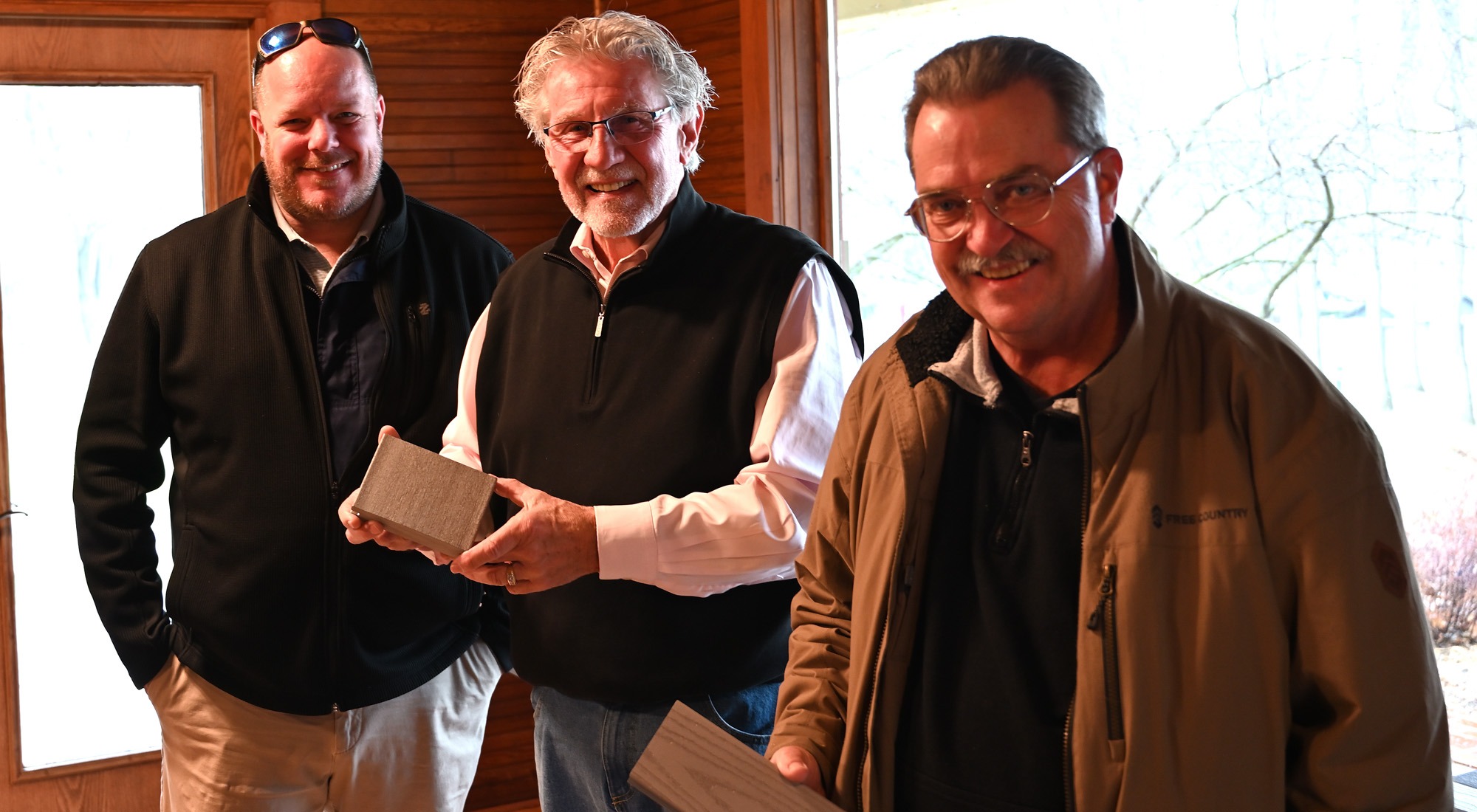 For a century, the Graziani cottage stood on Kentucky Point.  In its one hundredth year, it was saved from the bulldozer by Clark Lakers who managed to float it down the lake to the County Park, where it underwent its first restoration.  Now, 25 years later, the iconic structure is being saved again, this time from disrepair.  The outpouring of love and support for the restoration of the Community Center truly illustrates what standing up for Clark Lake means.

The Community Center is about preserving Clark Lake’s past.  Click here to find out about the most recent addition to its collection of Clark Lake artifacts.

In this photo, a steamer is arriving at Kentucky Point.