Is There Passion for Fleet 58? Check This Out!

Terri Pease Huffman was an avid member of Fleet 58 during the period that  Clark Lake had more Hobie Cats than any other inland lake in the country.  She is passionate about Fleet 58–and plans to sail again on July 6th.  Here’s the Fleet 58 story by Terri Pease Huffman:

Clark Lake Fleet 58 was renown throughout the Hobie Cat Division 10 sailing crowd during our heydays. We knew how to deal with the winds on any lake because the voodoo winds at Clark Lake challenged us each Sunday morning. July 6, 2014 we are again gathering to celebrate our history and our FLEET.

The opportunity for me to race one more time brings all kinds of reminiscent memories that I have carried since I began my sailing career in 1974. My favorite memory, which began my association with the fleet, was on a Monday when I had been out sailing on my 16-foot Hobie after waitressing all weekend at the Eagles Nest. John and Bev Avis were out sailing and pulled up to me and talked to me about joining them on Sunday morning to race. It was from that day forward I had to learn what a buoy was, what the course was, and let us not forget starboard and port. So Sister Sandy and I hit the course the next weekend and it was race-on after that.

We were newbies to the fleet for sure. There were the Avis’, Ambs’, Barnett’s, the Vermeulen’s, Passman’s, John’s, Fish family, Lyke’s, the Melling’s, Griffith’s, Dowd’s, Charlie Quiberman, Demming’s, Wedemyer’s, Phil Schindler, Stoney Green, Whitney’s, Szostek’s, Beffel’s, Negus’…..and many more. This crowd would join for our 3 races every Sunday morning after my Dad, Sam Pease, Myrt and Bowser Eagy, and others placed the marks strategically from one end of the lake to the other, chose a course and judged the finishes. At 18, I didn’t realize I was aligning myself with a group of people whom I would share my adult life with, long after sailing. 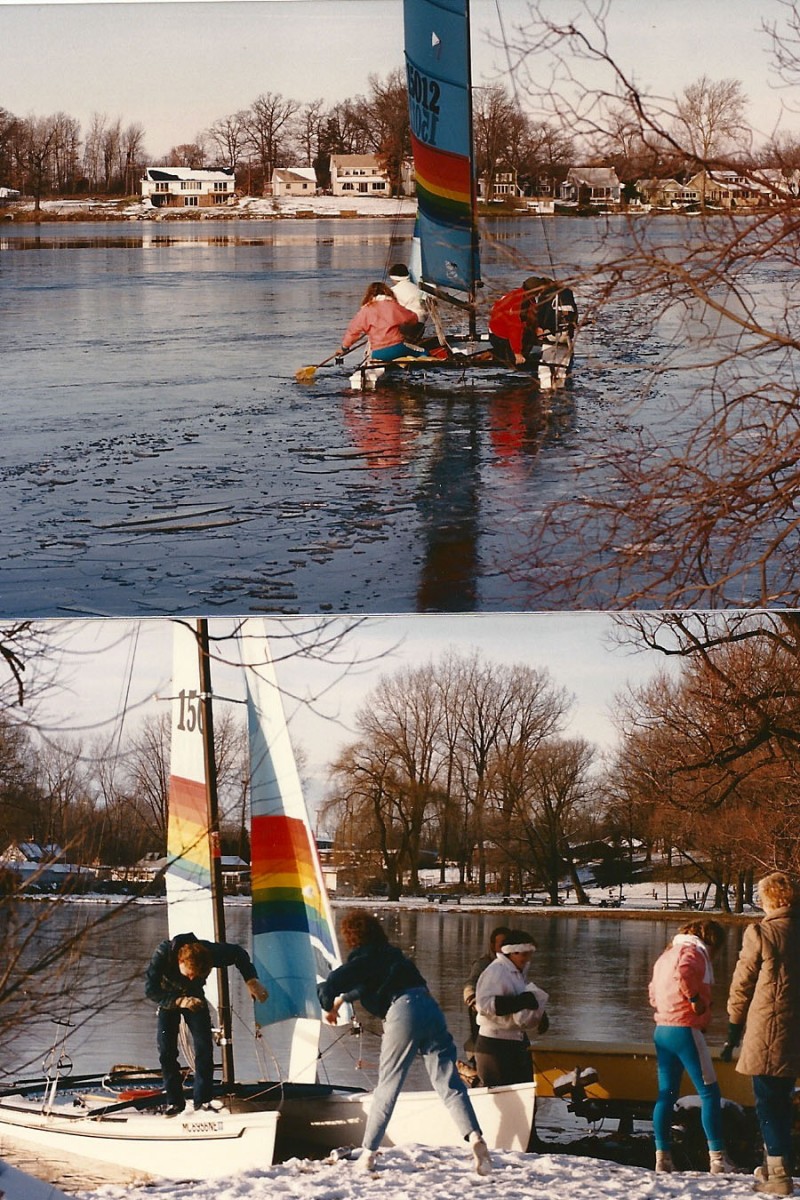 We, as a fleet, traveled up and down Lake Michigan racing in Division 10 sponsored regattas. Everyone knew when Fleet 58 had arrived because we brought the fun factor! We knew how to celebrate the wind, the friendship and the spirit of the race. There were many Division 10 regattas held at Clark Lake also. “Voodoo Winds” Regatta is what we named them. What a challenge that brought to those big shots that raced on Lake Michigan. What an experience to be at the starting line with 20 plus boats in each of the 18-foot A-B and 16-foot A-B fleets.

There were special events held throughout the year like the Icebreaker Regatta. We would start at the Lodge and break ice down to the county park. Just for the fun of it! 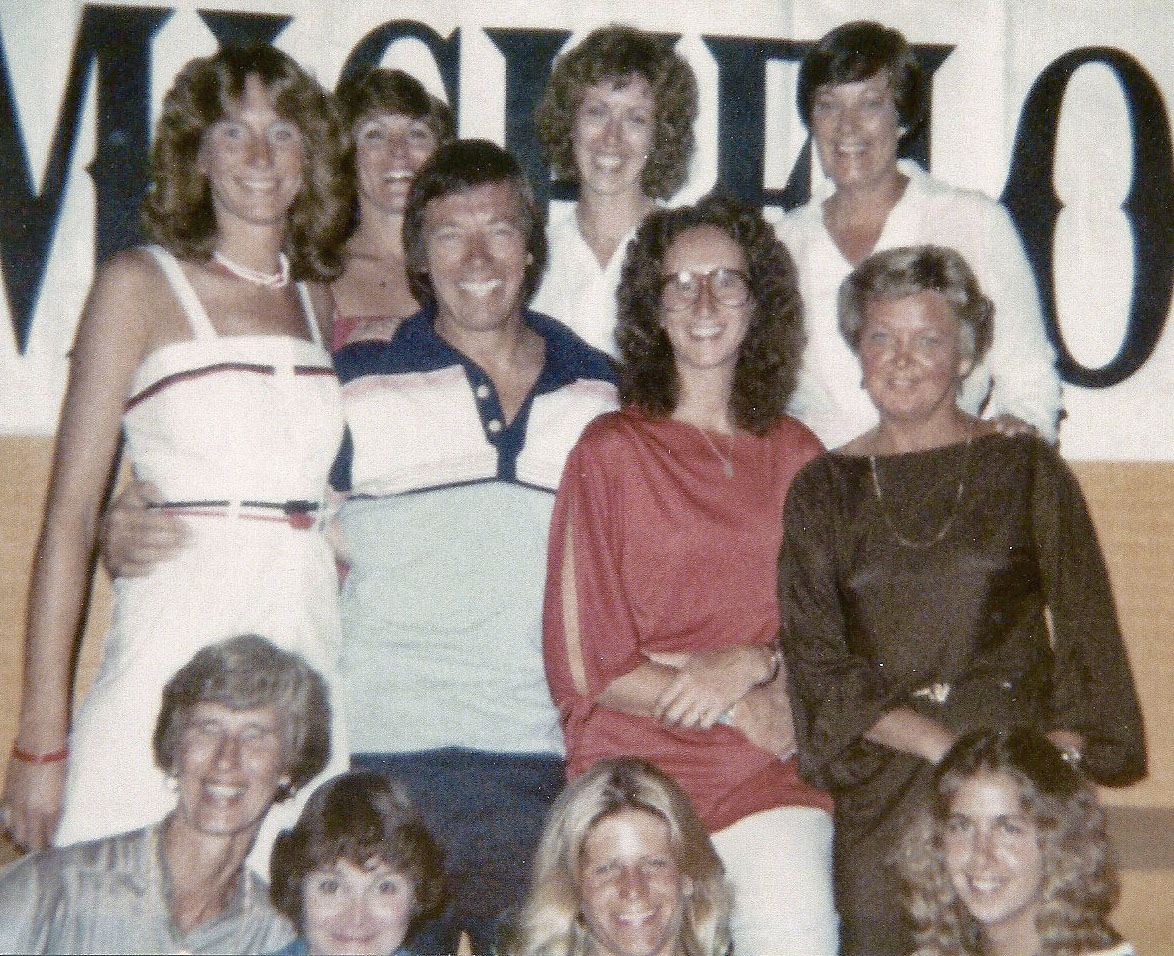 What happens in Vegas doesn’t always stay there. At the Women’s National, Hobie Alter spotted the Clark Lake group, was impressed, and promised to come to the next regatta at Clark Lake. He was good to his word!

Many of the men sailed in National events (wish I knew all the history…but I don’t), as did Judy Whitney, Sandy Pease Simon, Michele Ambs, Kathy Pease and I. Judy and I sailed on a 14-foot Hobie on Lake Tahoe which was the first Women’s National event. Our group, which included non-sailors like Darlene Malecki who attended all seven, for support of course, traveled throughout the United States once a year for seven National Regattas.

We are ready for the race on July 6 and the Clark Lake Spirit Foundation fundraiser following at the Pointe Bar and Grill. We look forward to the cheers from the shorelines. Thanks for the memories Clark Lake!!

Sailor or not, you’re invited to the Fleet 58 Reunion and Regatta on July 6th.

Not a sailor? Be part of the fun at the Caribbean Buffet at the waterfront deck at the Pointe Bar and Grill starting at noon. Tickets are $30 in advance, or $35 the day of, and there will be a cash bar.  Tickets available at Doyles.