Among those who arose early this morning to see the lunar eclipse this morning was Carl Noechel who was able to capture the event. He took these three photos from the east end of Clark Lake.

To enlarge, click or tap photo; to reduce, repeat. 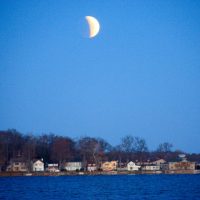 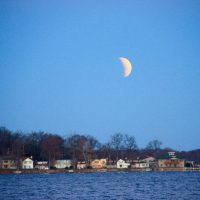 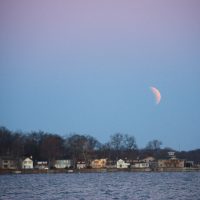 The eclipse began around 6:16 am and continued after the sun came up.  The ambient light from the impending sunrise would tend to obscure the moon’s image, but as you can see, early risers at the lake were able to view the event as the moon headed for the horizon.  The weather also cooperated so that this “blood moon” could be seen at Clark Lake.  “Blood Moon is sometimes used to describe a total lunar eclipse. When the earth casts its shadow on a full moon and eclipses it, the moon may get a red glow”, according to www.timeanddate.com .