Every detail of Mahalak’s Saturday night fireworks was extensively planned out.  Advance work meant that every consideration would fall into place, carefully choreographed.  Starfire Fireworks had arrived with the proper equipment, and on schedule, so the show could begin when it was dark enough, probably at 9:30 pm.  To be sure, everything was going well—until it wasn’t.  What happened? 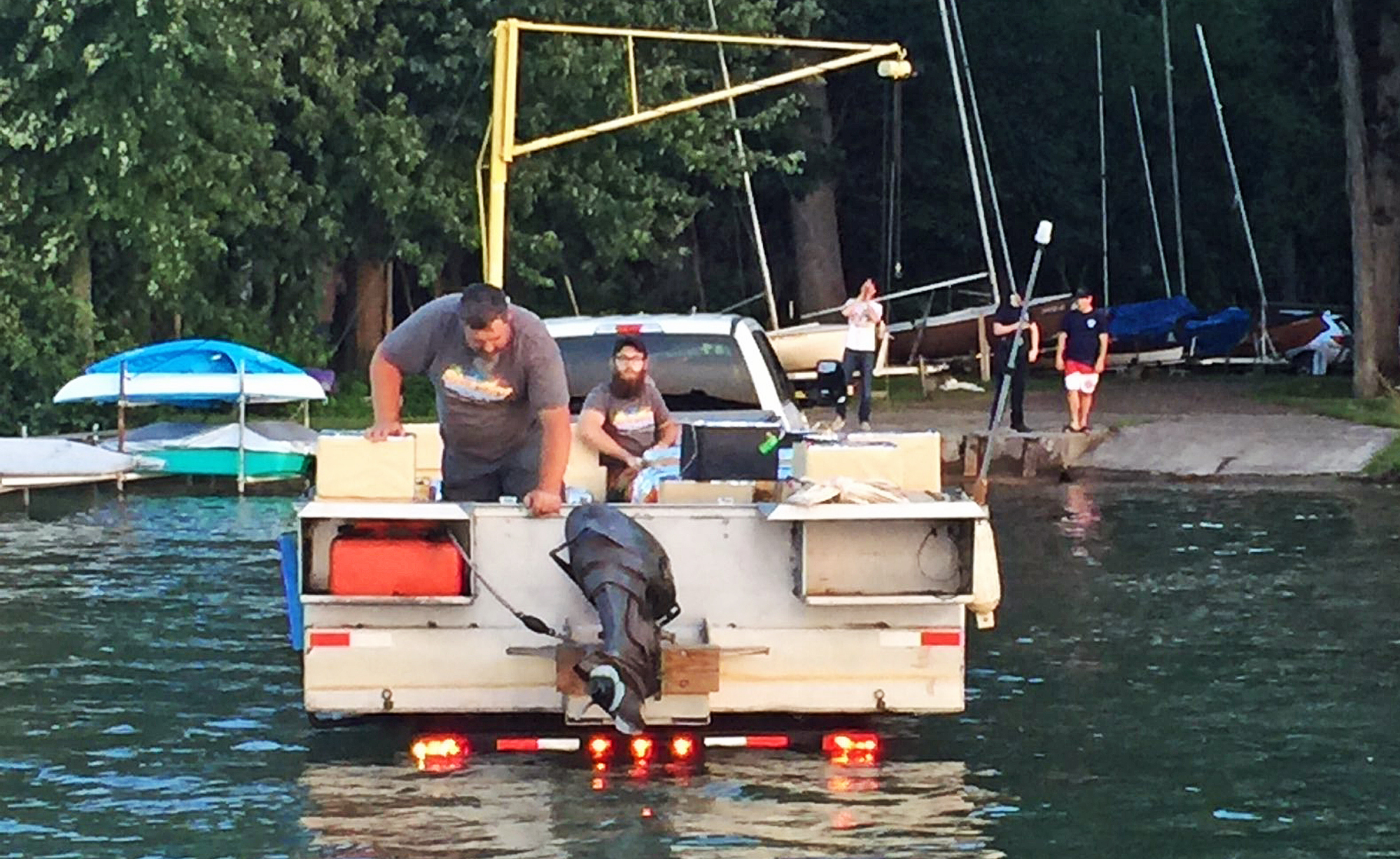 Somehow the Starfire crew had acquired some faulty information.  Someone told them to launch the barge at the Clark Lake Yacht Club.  The Yacht Club boat launch works fine for sailboats and powerboats, but not so for a craft that requires a large draft.  The slope of the bottom is gradual, not steep like the west end boat launch.  The fireworks team backed the barge farther and farther into the lake.  The bottom became softer, and the wheels of the truck became mired in it. The truck came to a halt and stubbornly refused to move.  Because it was not deep enough, the barge stubbornly refused to float off its trailer.  At that point, all involved wondered if the show would go on.

The struggle went on, and it was getting later all the time.  Finally, a Yacht Club member and a team of firefighters who were on hand for the event, through sheer will-power and muscle, yanked the barge off its trailer.

Once that happened, the barge was on its way to the intended location between Eagle Point and the Malahak’s—and the show did go on.   Now well past 10 pm, the last remnants of light had dissipated, leaving nighttime darkness.  Some think the improved contrast enhanced the massive blasts of white and streams of colors that filled the Clark Lake sky.

Meanwhile, back at the Yacht Club, the truck was still stuck in the water with its engine running.  Once the show was over, how to rescue the truck became the next order of business. One of the Mahalak’s guests was Chad Reigle, a member of Wicked Jeeps of Southeast Michigan.  He had come equipped with all his gear including a winch, rated at 13,000 pounds.  The truck’s weight and the force needed to pull it out meant the modified Sports Unlimited Jeep would have to be tied to something else.  The something else turned out to be a tractor owned by the Yacht Club.  At 2 am, the truck was pulled from the water, and the saga ended.  The Starfire Fireworks team left Sunday morning. 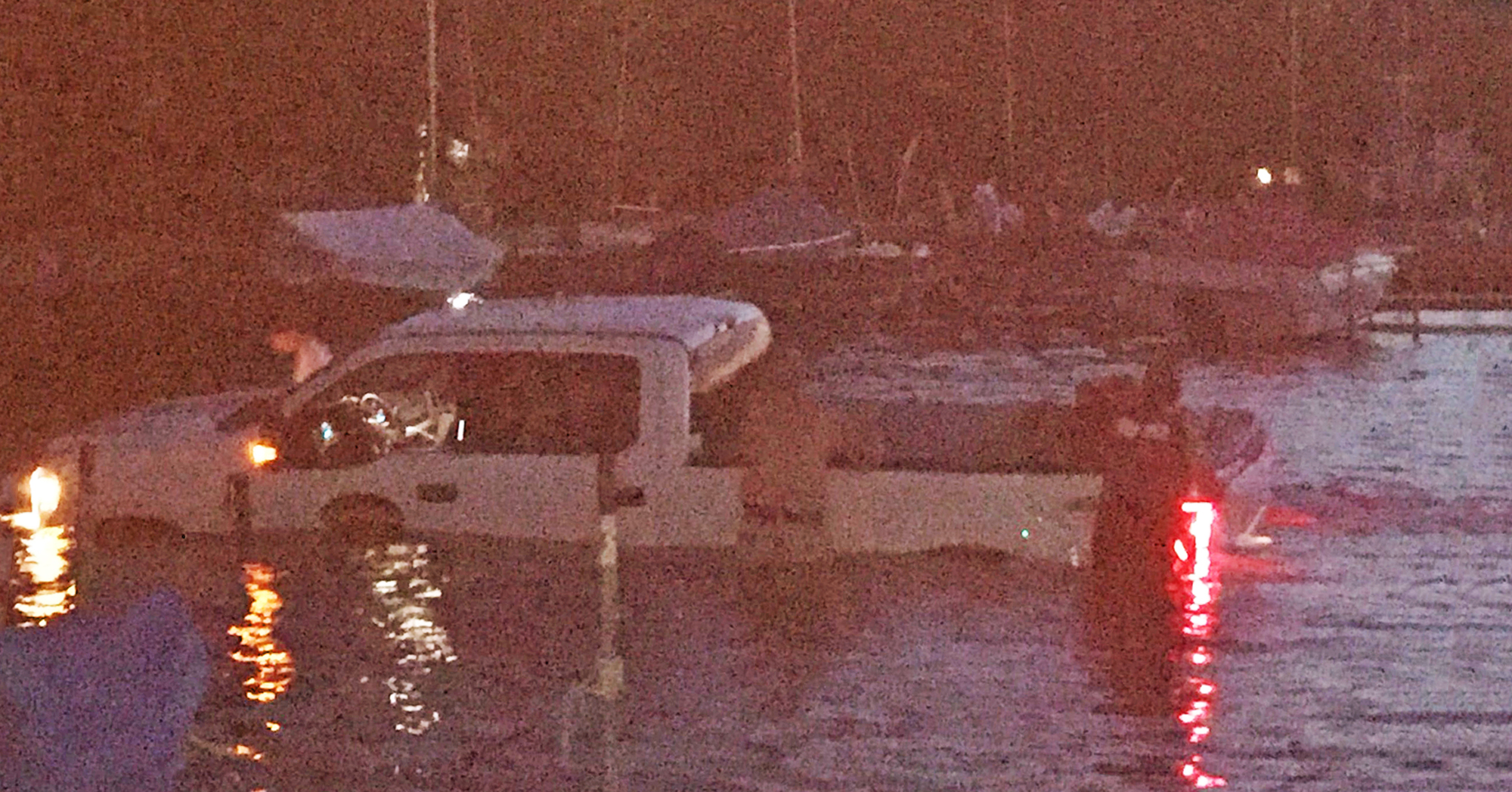 Chad Reigle is also a sales representative at the Malahak’s Monroe Superstore dealership.  The Wicked Jeeps group have the attitude of “leaving no man behind” and respect their surroundings when going off-road. The knowledge gained from previous experiences and having the equipment on hand made possible the rescue.

The Mahalak’s fireworks celebration has been the talk of Clark Lake, as witnessed by comments on the Clark Lake Spirit Facebook page and on this website.  Before the leaving this story, how about one more look at the Saturday night finale of the fireworks that almost didn’t happen?