An excellent reason to conduct a Clark Lake boat count each year is that things change. And 2014 is no exception! 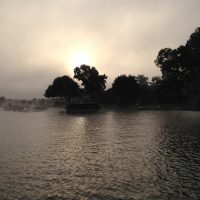 Sun rising behind Eagle Point, shining through fog on July 4th, the morning of the boat count

Clark Lake has fewer powerboats of various kinds than it did in 1960. In 1960, the total was 436—in 2014, 276. Could it be that people prefer the ease of their increasingly luxurious  rafts over the speedboat experience? The number of outboards, inboards, and jet boats declined. There are more inboard-outboards (I/O’s) this year—128, but that’s less than the peak in 2005 of 172. The number of fishing boats increased to 36, but a whole lot less than the 169 recorded in 1967.

There are two big gainers in the personally-propelled watercraft section. Kayaks continue to multiply like Clark Lake chipmunks—164 in 2013 to 193 in 2014.  Kayaks have never dipped from one year to the next so that the upward trajectory remains intact. 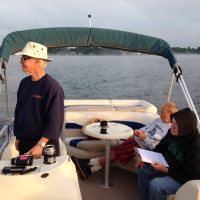 A new category enters this year’s count—paddle boards. It’s not that paddle boards haven’t been seen on the lake before, but the current iteration is new to the Clark Lake scene. These paddle boards make it easy (sort of) to stand and paddle and even do yoga or acrobatics on them. The 2014 count reveals 38 of them.

More swim rafts follow the shoreline with the highest number ever of 30, up from a previous high of 26 in 2006.

It’s interesting to compare the number of boats moored at the various clubs to the number at the docks of individual residences. 26% of Clark Lake’s boats are moored at clubs, about the same as last year. 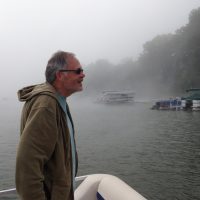 This percentage depends a lot on the number of lakefront homes—the number used in this calculation is 350. The number of houses likely will continue to decline as lots are combined–with smaller structures coming down and fewer larger structures replacing them.  This will certainly affect the percentage in future years.

The total number of watercraft at the clubs is larger than ever—367 in 2014 compared to the previous high of 356 in 2012. The biggest number is at Eagle Point, followed in this order–the Beach and Boat Club (Consumers), the Clark Lake Yacht Club and the Beach Bar.

Because rafts once again are number one, here are some breakouts about where they live. There are 90 rafts at Eagle Point, 59 at the Boat and Beach Club, 59 at the Beach Bar and 1 at the Yacht Club. The other 353 are moored at individual residences.

The boat count on July 4th started at 6 am. The count is traditionally taken on July 4th with the presumption that all boats that are going in the water for the season are moored at docks or the immediate shoreline, by this date. 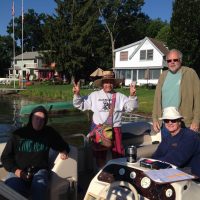 And at 6 am, the vast majority of boats are not in use, promoting a more accurate count. The weather on the Fourth offered a special challenge. It was not only chilly (in the low 50’s), but foggy, especially in the cove on the east side of Eagle Point. But the crew was determined to take an accurate count.

Since 1987, Bill Tuttle has conducted the count. He took over after Bowser Eagy’s passing.  Bowser’s data from 1961 to 1986 are missing and have never surfaced. Assisting Bill for this year’s count were Jim Tuttle (Bill’s brother), Steve Wawro, Jim Bretes and Rick Belcher. Frank and Josie Hones conducted the count in the Pierce’s Bay area. Hugh Harris provided the data for the boats at the Clark Lake Yacht Club.

Below you will find a spreadsheet with lots of detail.  To enlarge, click or tap.  To reduce, click or tap again. Yellow indicates a high number; blue, a low number: 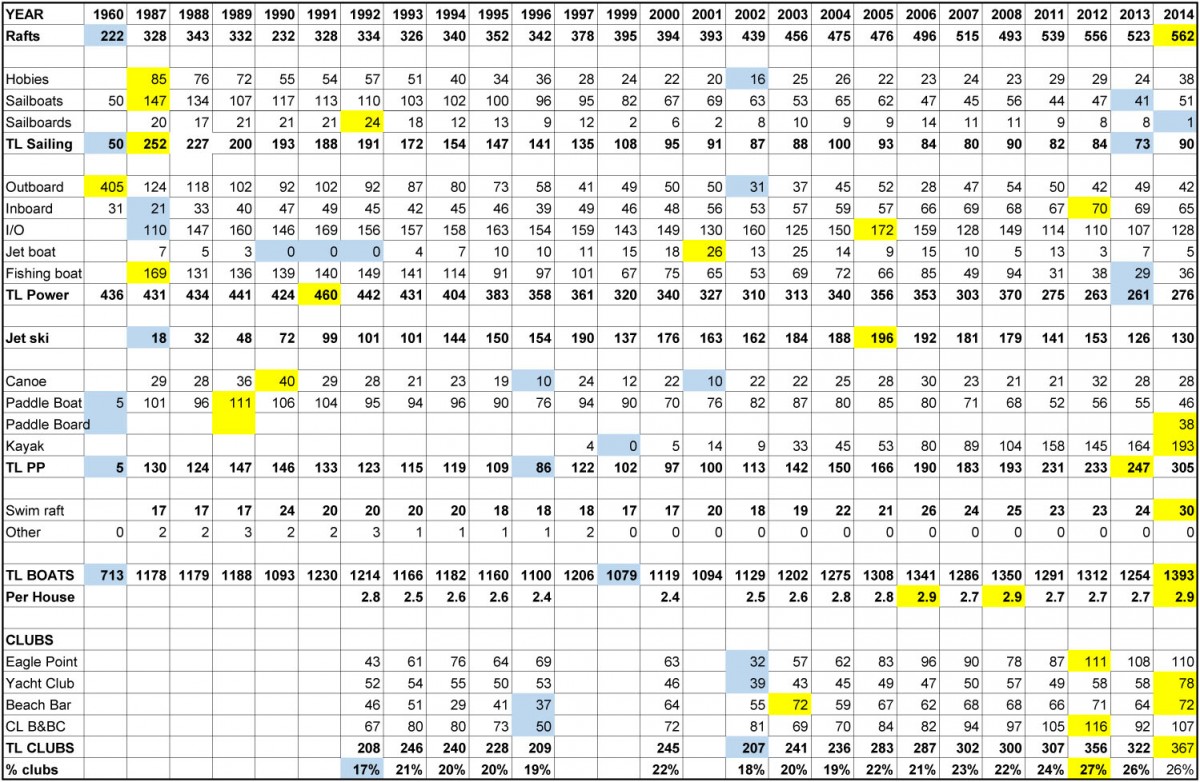