Note – Eagle Point Marina joins several other local companies that support this website.  Those include A Plus Electric, Beach Bar, Brooklyn Plumbing and Heating, Doyle’s Market, Monroe Superstore and M-R Builder.  All have strong connections to Clark Lake.  On every website page with a story, you also see an acknowledgment of their support. To learn more about their business, click on the tile to see the website for each.   Go ahead, give it a try!  Please remember them.

Eagle Point has a long and storied history. It remains one of the top venues of lake memories, reaching back to the 1800s.  Owners of the Point are part of that history.  Among them are Rollo Every, Cal Pittman, and the Dunigan’s.  Now Blair Huff joins that exclusive group.

So, how did it happen that Blair became the Point’s new owner?  It started at Lucero’s.  Blair bought the property and restaurant formerly known as Nightcrawlers (aka the “Worm”) in 2016.  He then lured Jorge Orozco from the Los Tres Amigos restaurant chain to transform the Worm into Lucero’s (translated means “bright star”).  The success record of previous businesses at the corner of Ocean Beach and Jefferson had never been all that “bright.”  Blair and Jorge turned that around.  Just drive by and witness the cars in the lot.  Lucero’s star continues to shine brightly.

Here’s how a dinner at the restaurant led to bigger things.  Blair’s uncle, Pete McGowan was visiting from St. Louis, Missouri, and was staying at one of the Dunigan cottages at the Point.  After dinner at Lucero’s, Blair drove Pete back to the Point.  In the glow of a brilliant Clark Lake sunset, Blair had an epiphany.  The next day, he got in touch with the Dunigan’s and asked them if they would be willing to sell.  That would include the Marina, boat slips, party store and cottages.  Talks began, and ended with a “yes.” The deal moved forward.

Dronage of Eagle Point from 2017

The Dunigan’s still own the building that hosts the restaurant.  The current operator, Equity Vest Management of East Lansing, has a long-term lease.  To view the February 7th story that broke the news about the Point’s change of ownership and how that relates to the restaurant, please click here.

Blair says “we’re dedicated to improving our operation, serving our customers, and getting to know the Clark Lake community.”   He states emphatically that he’s “willing to do whatever needs to be done to make this place go.”  So far during his ownership the floor in the sales area has been renewed, the parking area improved, buildings painted a new blue color, and docks repaired.  Further, he’s reached out to the community by hosting Friday night events in the boat slip area that featured a Lucero’s food truck and live music. “I spent time manning the gas pumps.  I got to know more about people at the lake as I put gas in their tanks.” And his wife, Chelsea, worked the counter at the party store with a similar outcome. 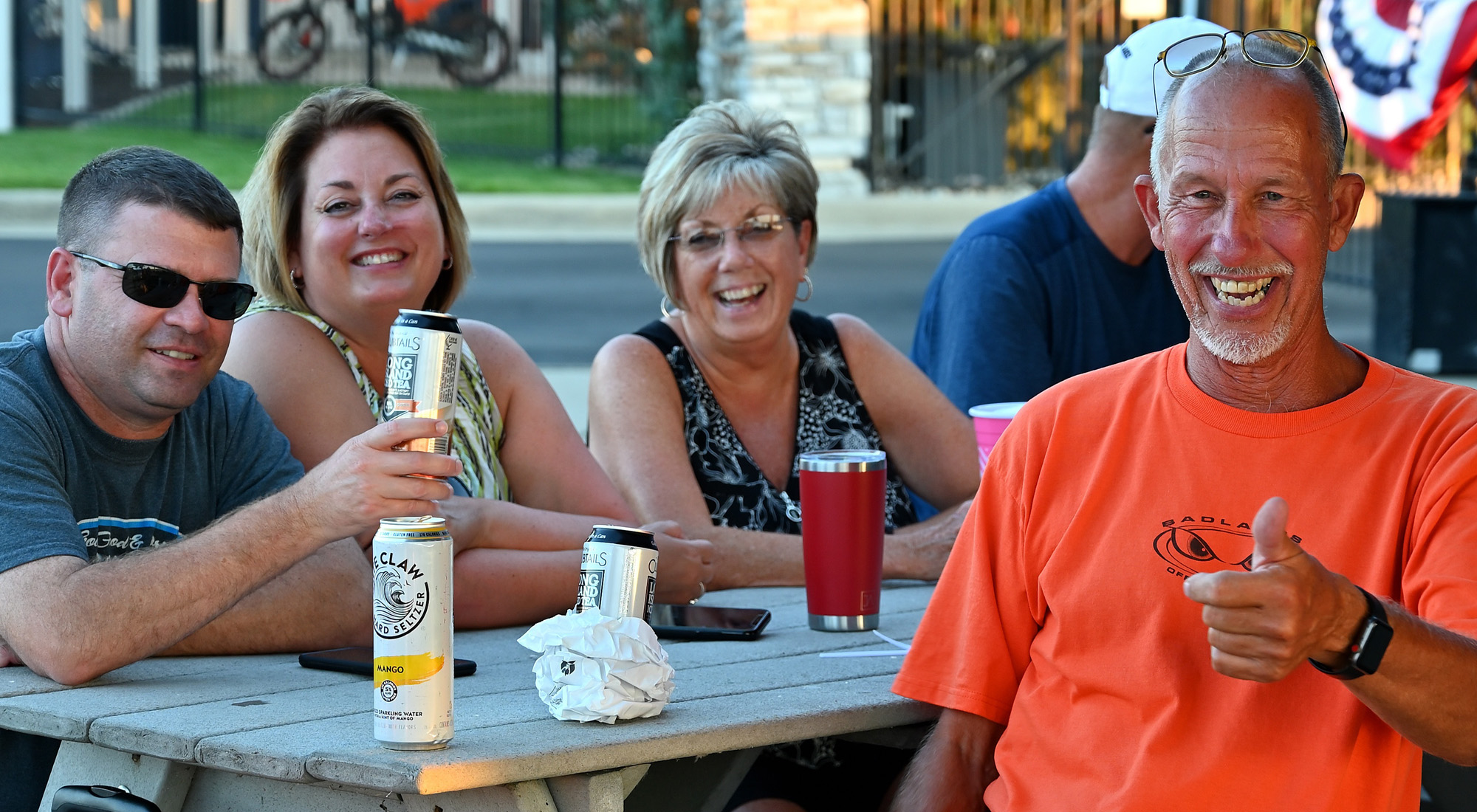 Blair is a get-it-done type of guy.

Most of the staff are familiar faces to those at the lake.  Ben Scott is GM, Kenrick Bahaw and Tom Letson are techs, Amy Lang is office manager, Brady Anderson is crew, and Gina Saumier looks after the cottages.

Blair’s personal profile?  He’s 35.  He attended Queens, Lumen Christi, and LCC.  Blair met Chelsea through his dealings with CP Credit Union.  Chelsea was his go-to person when arranging loans for customers of the Huff Auto Group, owned by Blair’s father and uncle.  Blair and Chelsea married and now have four children—Anistyn 8, Blair 5, Lois 4, and McGowan 2.

What’s going on now at the Point?  Blair notes “we added a second line of rafts, Bentley Pontoons.  They come in at a lower price point than our other line, the South Bay.”  They continue to carry Centurion wakeboard and ski boats.  “We sold every one we had this summer.”  Now they are focused on a fall sale that includes free storage if someone buys now. 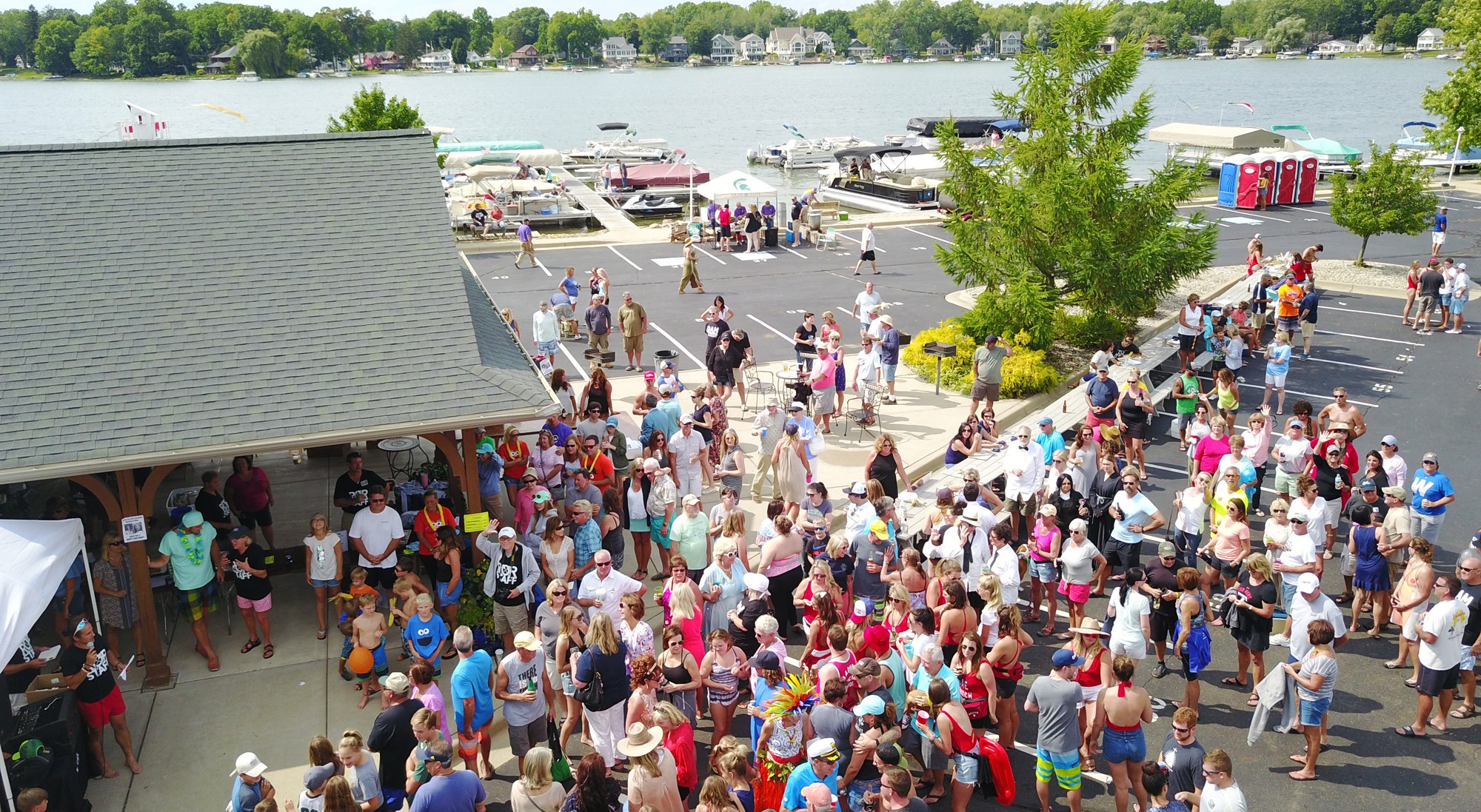 Raft-O-Rama awards party at the Point

Blair Huff is looking forward to what comes next.  That could include the many community activities that happen at the Point.  In the past, the Point has been the venue for Raft-O-Rama, the Spirit Trial’s Beerfest, and other events big and small.  When you listen to Blair, you can tell he’s happy to be a part of it. 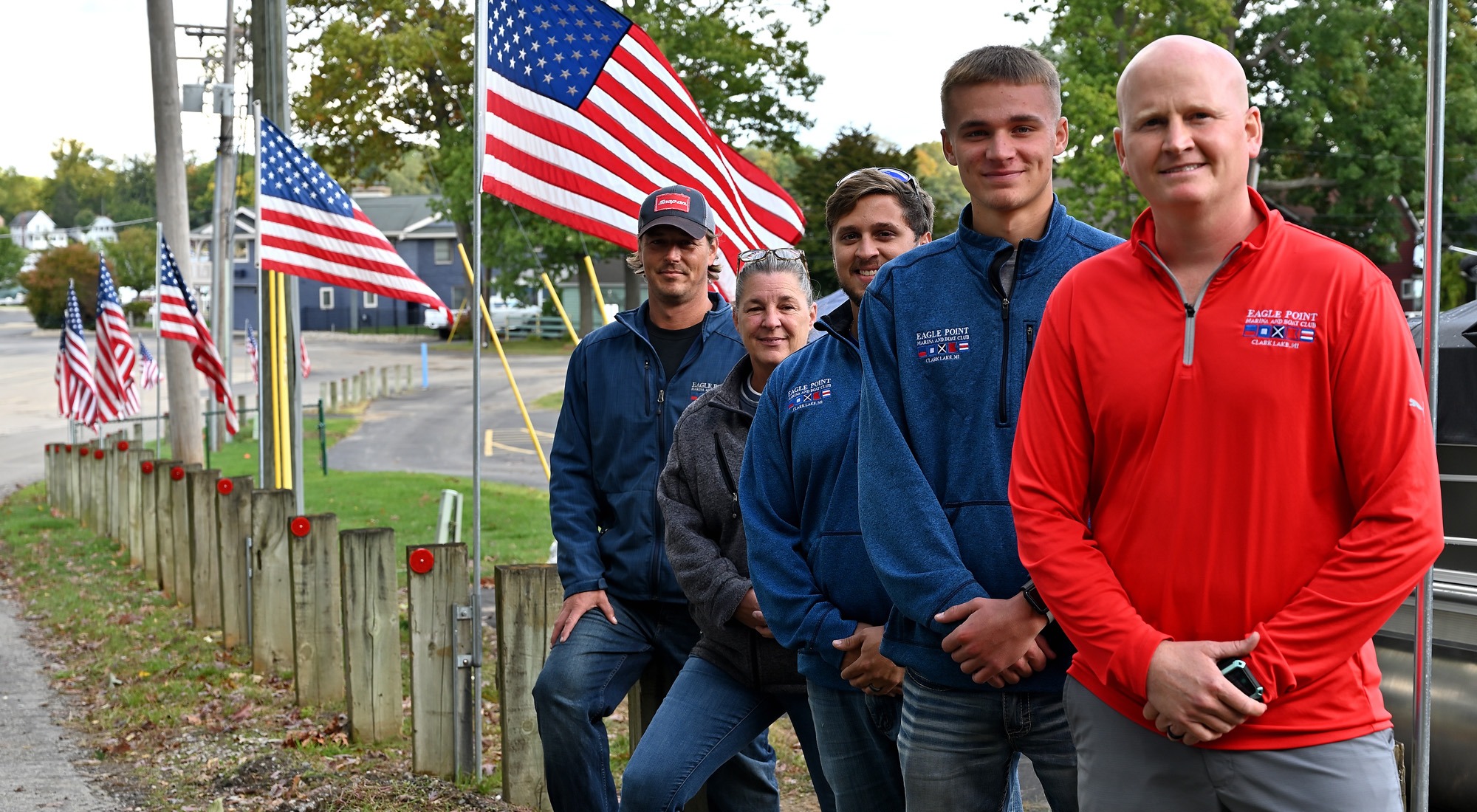 In Clark Lake history, Eagle Point emerges as a central location for activities.  The slide show below shows how Eagle Point entertained visitors and Clark Lakers through the years.  Some viewers will recognize Rollo Every and Cal Pittman pictured about the time of another transfer of Point ownership.