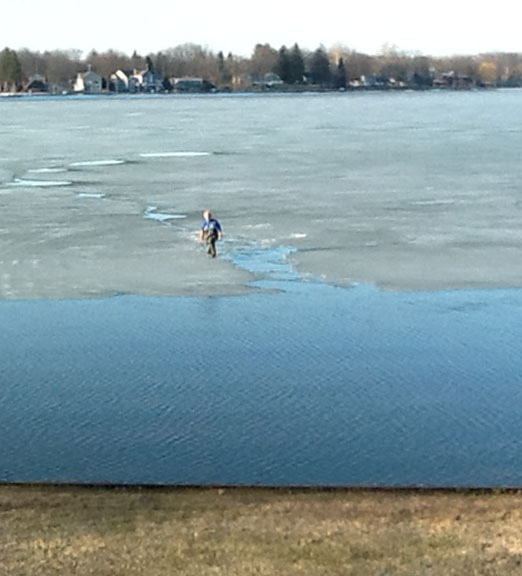 Mike Ligibel in the Sandy Beach area of Clark Lake

Mike Ligibel is pushing the envelope for spring to arrive. Nancy, his wife, took this photo on Saturday as Mike, using waders, explored the ice in front of his house in the Sandy Beach Road area.  He found the ice to be very slushy.  He said “it might hold you in some locations, but I sure wouldn’t trust it.”

The ice floe had moved towards Eagle Point by Monday (this) morning.  But by afternoon, it was back in the Sandy Beach area.

Meanwhile, regarding the way the ice is going out this season, John Calhoun comments “Gotta love that west wind!  I won’t be rebuilding the rock sea wall like last year!”

A  boat lift near the township park that was frozen in place and spent the winter in the lake, remains in the same place.  The ice could have carried it away, but did not.

Two intrepid Clark Lakers, Ann Clark and Katie Rensch (both have houses in the Eagle Point cove on the east end), appear to be first at getting their docks in the water this season.  Every year, it seems harder to be first in, especially if the lake is still frozen in front of your place!