This website sought answers about the 49% increase in Clark Lake sewer bills.  This article probes two Columbia Township elected officials who are intimately familiar with the history and current state of Clark Lake’s sewer system.  In a two-hour session on Thursday, June 14, Supervisor Bob Elrod and Treasurer John Calhoun responded. 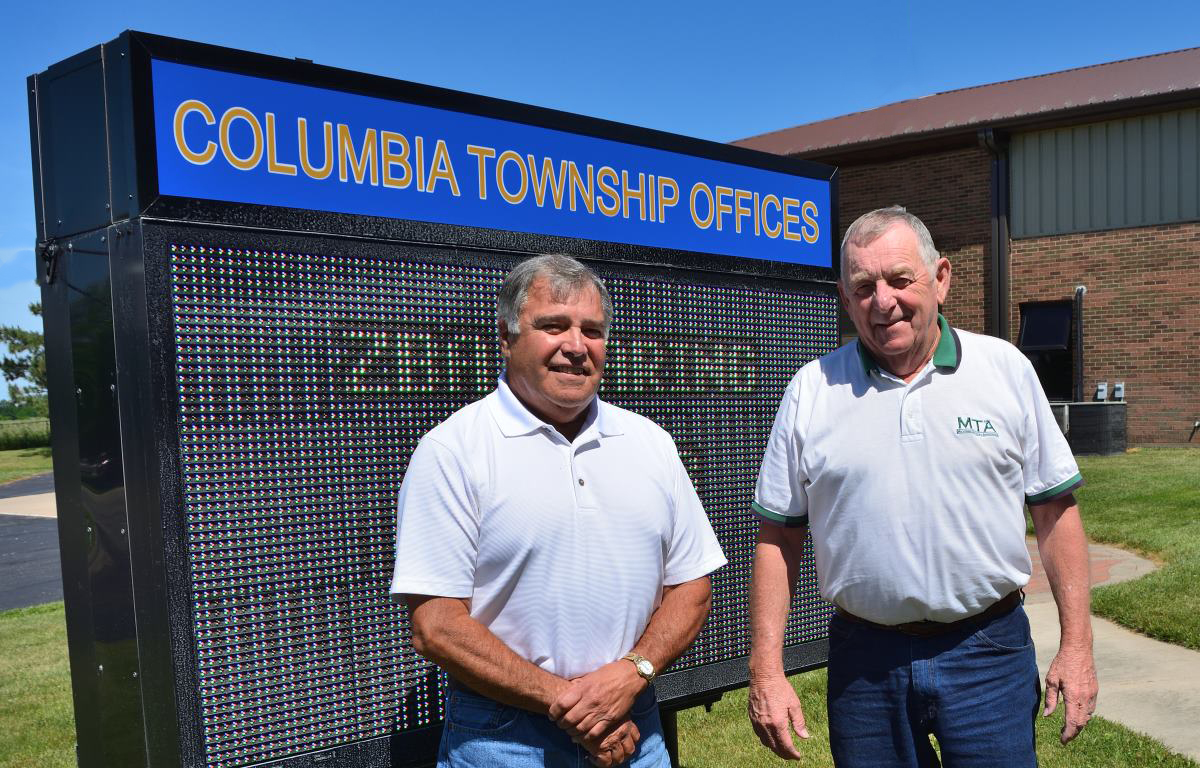 Bob Elrod has been supervisor since 2008 and three years before that, the zoning enforcement officer.  In his 39 year career with Consumers Energy, he was involved with the gas transmission and storage system.  He moved to Columbia Township in 1954.

John Calhoun was an international finance manager for United Parcel Service prior to his becoming Township treasurer in 2006.  He has lived at Clark Lake since 1971.

Both expressed willingness to answer any and all questions regarding sewers.  The question and answer session focused primarily on the Clark Lake rate increase and how we got to this point.

This is a big jump in rates all at once.  Why such a large increase?
The Southern Regional Interceptor litigation has been hanging over our head for a long time.  We delayed increases because we thought the SRI outcome might require adding to sewer bills and we didn’t want multiple increases over a short period of time.  SRI has been in the courts longer than anyone expected.  In the mean time, Clark Lake’s sewer system, which is now about 20 years old, is showing its age.  Failure of customer’s grinder pumps has accelerated dramatically.  The cost to replace cutter and bearings is $700.  But only about 40% of grinder pumps can be rebuilt.  When the casing goes, the pump must be replaced at a cost of $1750 each.  The Clark Lake grinder pumps are known as the E1s. There is another brand, Flyght, that has more advanced technology making them easier to repair in the field.  They could be used, but at $2300, they represent a much greater outlay when you consider that there are over 600 grinder pumps at Clark Lake. And, unlike the E1s, we don’t have any historical data on their long term reliability.

What about replacing failed pumps with the less expensive models being used at Lake Columbia and Vineyard Lake?
Changing the system would cost far more.  The cans that hold the pumps would need to be replaced at a cost of $2,500 each, plus the cost of the pump. There would be about 8 hours of labor for each replacement. The whole sewer system would have to be shut down for a week or more as a massive crew worked to retrofit each property. Think what it would be like to have no sewer service for days.

How long before we get hit with another rate increase?
This should hold until there is a final ruling on the SRI litigation. We don’t know what that will mean to sewer rates.  The court could rule that the cost could be part of future sewer bills or it might be distributed to all property owners, whether in the system or not. After a certain number of pumps are purchased, it is possible that rates could drop because only rebuilds will be necessary. But it’s expected that grinder pumps must be replaced every 20 years.

The Township operates sewers for Clark Lake, Lake Columbia and Vineyard Lake.  Has there ever been a commingling of funds?
Yes.  When I (John Calhoun) became treasure in 2006, I found the funds for the systems had not been segregated.   It took a long time to sort it out. We went back three years and re-coded every invoice and put them into their proper accounts.  There were bond issue obligations involved and that added to the complications. We went back to the 1990s as a starting point.

Is there such a thing as one lake loaning to another?
At Monday night’s meeting of the Township trustees, we’re looking at securing a loan for Clark Lake from the general fund. Also, Lake Columbia currently has excess funds, and they could loan Clark Lake $150,000 and return it with interest. By the time Lake Columbia begins to have issues and needs the money, Clark Lake will have paid it back.

Are there other options?
There is a public improvement fund whereby state non-tax revenue could be directed to sewers on an emergency basis. But it doesn’t solve the problem because it’s not enough.  For example, a lift station pump cost $50,000.  Both Clark Lake’s lift stations, one on Eagle Point Road and the other on Kentucky Point Avenue, are deteriorating. Hydrogen sulfide is eating the systems alive. This recent photo shows what happened to the lift station on Thorne Road in Hanover. 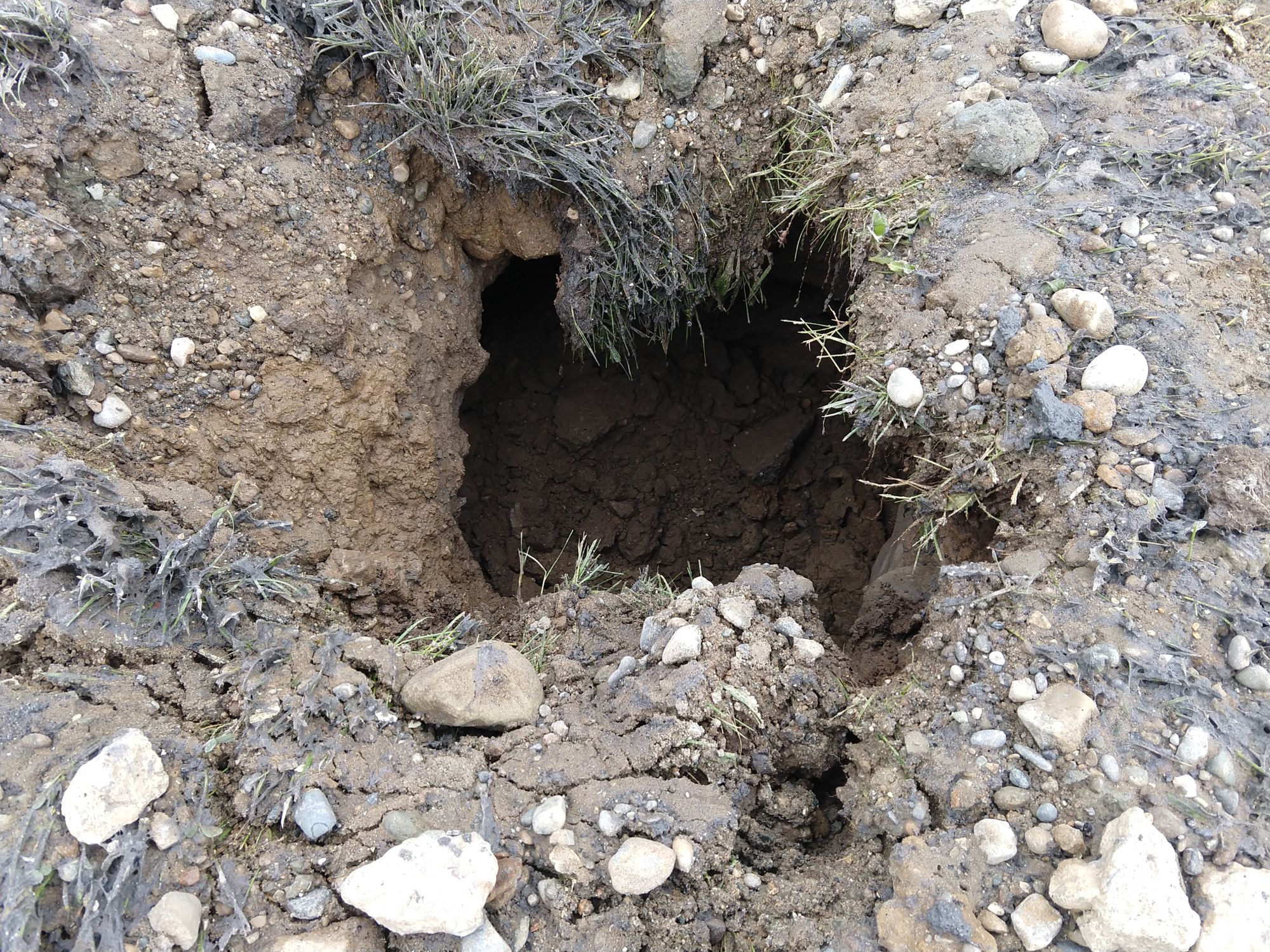 What are the component parts of each monthly sewer bill?
$26.46 goes to the Leoni Township treatment plant.  There is an operations and maintenance cost of $4.48, interceptor fee of $3.50 (for the line that runs from here to Leoni Township), repair and replacement of $40.62, and other operating (like electricity) expenses of $3.  Columbia Township does not charge an administration fee.  The monthly total is $78.

What is the cost of treating our sewage compared to the cost when the system was built?
The first sewer bill was $17.50 per month. Leoni’s treatment rate went from $9.50 to $31.52 per residence.  Three months ago they lowered it to $26.46. 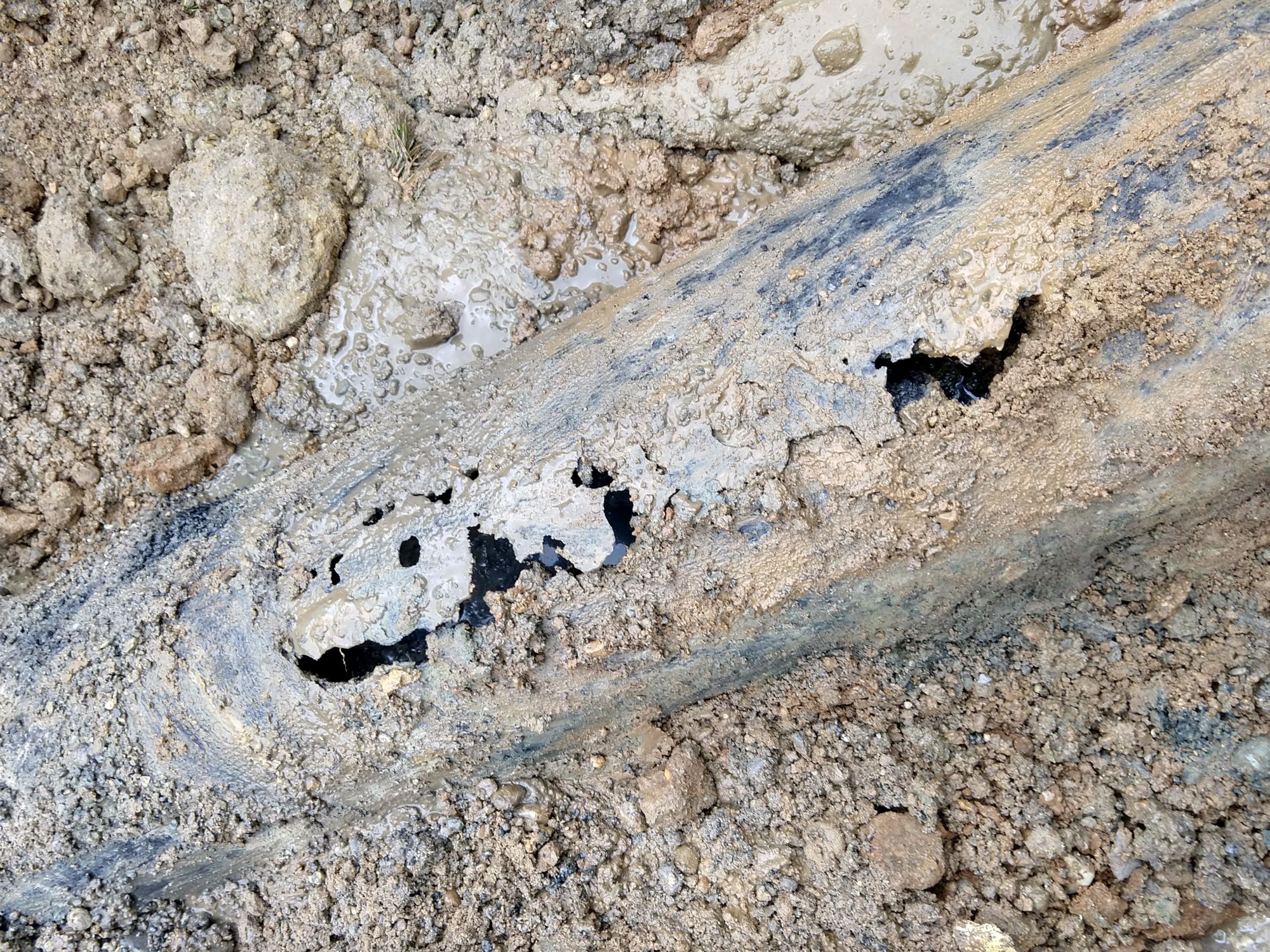 Why have costs gone up?
Inflation is a driver.  But we have taken steps.  For example, we rebid operation and maintenance.  Hiring Brooklyn’s DPW reduced costs by 50% and service is 10 times better.  Under the old plan, it could be days before your pump is fixed.  And there is one side story that speaks well of their honesty. During one repair, a DPW tech spotted something shiny inside one of the the pumps. It turned out to be a diamond wedding ring.  When he returned it to the homeowner, she was overjoyed.

Did Clark Lake benefit from installing the first system and allowing other systems to use its pipeline to Leoni Township?
Clark Lake paid for entire line to the Leoni treatment site, and then rented out space to other communities.  Clark Lake gets fees back from Liberty, Hanover, Cambridge, Norvell, MIS, Brooklyn, Napoleon and Leoni Townships. It amounts to $3 per user per month per user. If Clark Lake had to foot the whole bill for the transmission line, sewer rates would be higher for Clark Lake. Originally Clark Lake paid a $5.65 transmission fee but that was lowered to $0.65 because of a favorable balance. Then, because of the age of the system, costs skyrocketed.  The fee is now $3.50, as recommended by the outside consultant.

Why did you hire a consultant and how much were they paid?
We hired Umbaugh to analyze our financial situation with the sewers.  They are experts on these things and and give straight ahead advice. Their analysis cost $2000.

How did the Clark Lake sewer system start.  Did the public get a chance to vote on it?
Public meetings were held, committees formed, and petitions circulated to over 51% of those involved.  The support was overwhelming. There was input from the community, and that was a benefit.  A citizen referendum would have been required if each property were levied $10,000 or more.  As it was, each property owner paid $9,400 so that step wasn’t taken.

Can you provide some insights on why the sewers were built?
I (John Calhoun) go back to the fourth of July in 1976.  My septic system was more sophisticated than most. I had two lift stations that emptied into a tank and a drain field on the hill behind my house.  As friends and family were gathering, one of the lift pumps went out.  Not a good moment.  I recall my septic system cost $12,000 in 1978.  I said to myself, if sewers are ever to be built, I’m for it.  And of course, there is more to this question than just my personal situation. Clark Lake grew up as a place where people came for the weekend or a few days during the summer.  Their sewage would go into a tank.  Some had drain fields, but you had to keep sewage at least 50 feet from your wellhead. On Clark Lake’s small lots, that was hard to do.  How good were individual septic systems?  After a heavy rain, the lake was always a different color.  I noticed abnormal native weed growth and I would see fish that had tumors.  I haven’t seen that happen since the sewers went in.  The zebra mussels might have had something to do with cleaning up the lake, but I got to believe the sewers headed us in the right direction.  Without the sewers, there would have been no future development at Clark Lake. 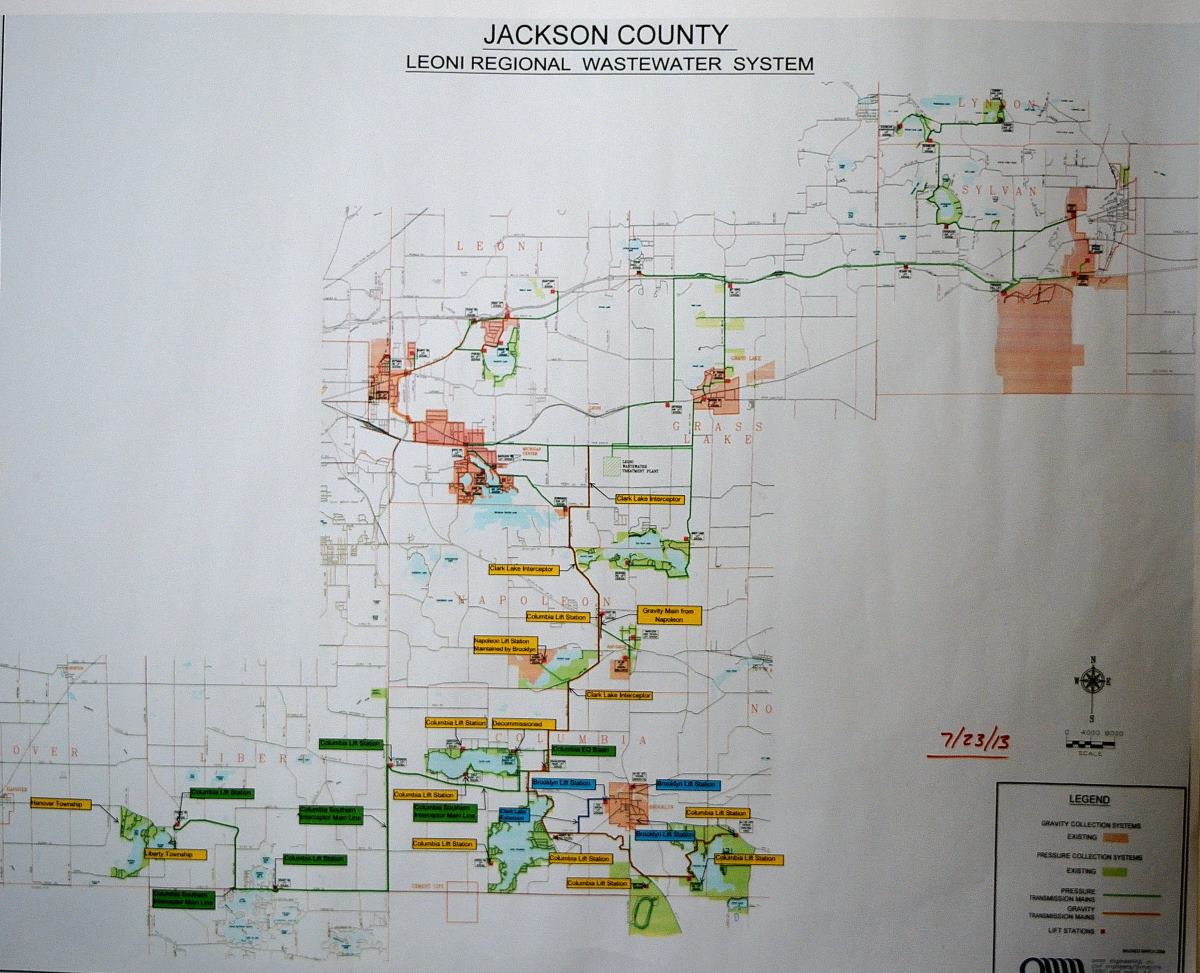 Some people think the sewers are mess. How did this happen?
Are you still driving your 1994 Taurus?  Same thing.  It wore out. This is a pressurized system with a million parts that all have to work together.  Chances of problems developing are multiple. A local contractor begged the Township to go with a gravity system instead.  As an alternative to everyone having their own lift station (grinder pump), there would be only six around the lake. This would have been a much simpler system.  But there is no going back.

Will there be public meetings about the rate increase?
At the beginning and end of regular meetings of Township trustees, you can have three minutes to give your comments.  But it’s not interactive.  Trustees will only listen.  To improve on this, we expect to establish a public information meeting to be held at Columbia Central High School.  At that meeting there will be opportunity for give and take. Date and time to be announced. 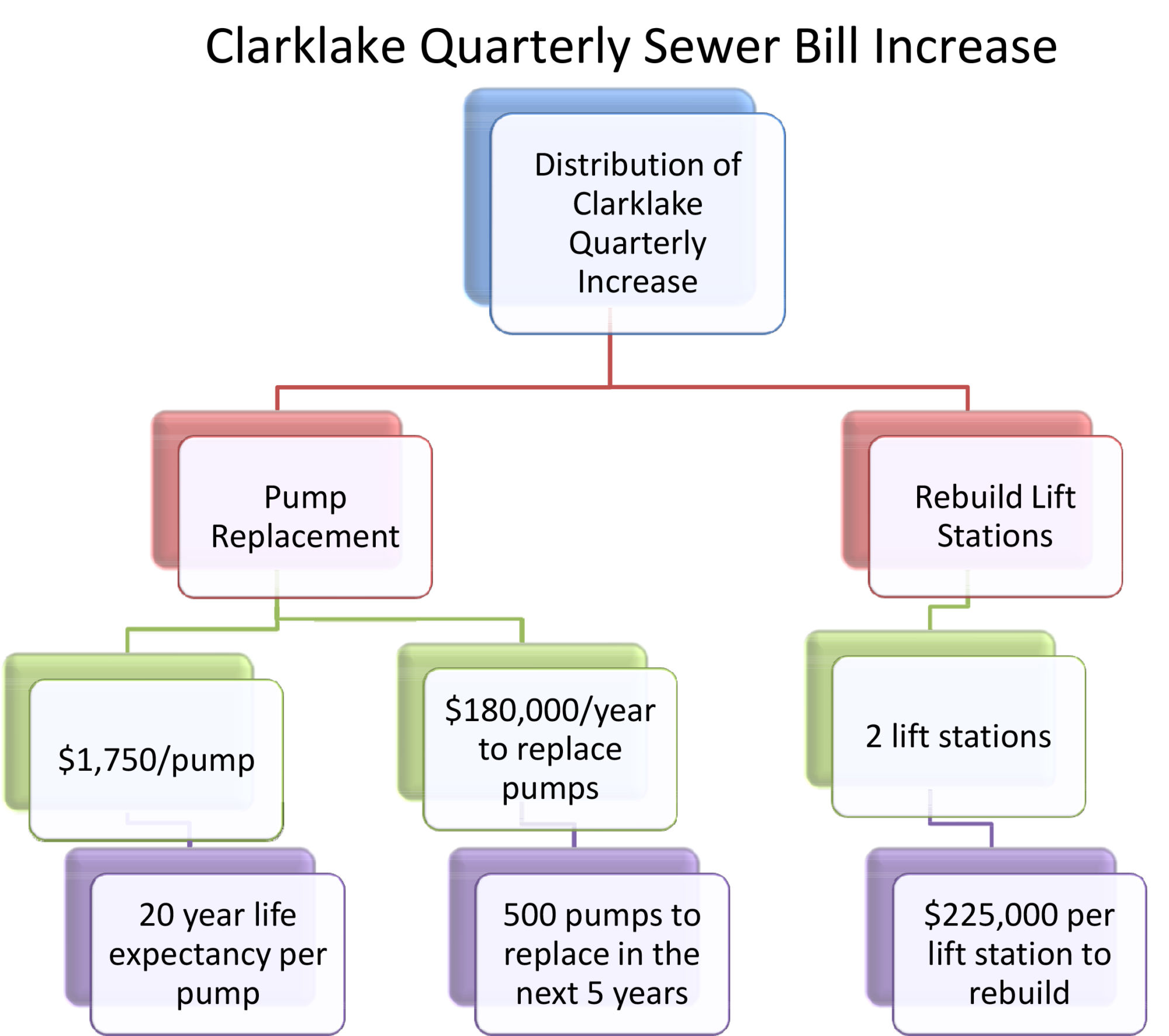 Letter that went to sewer customers from Columbia Township 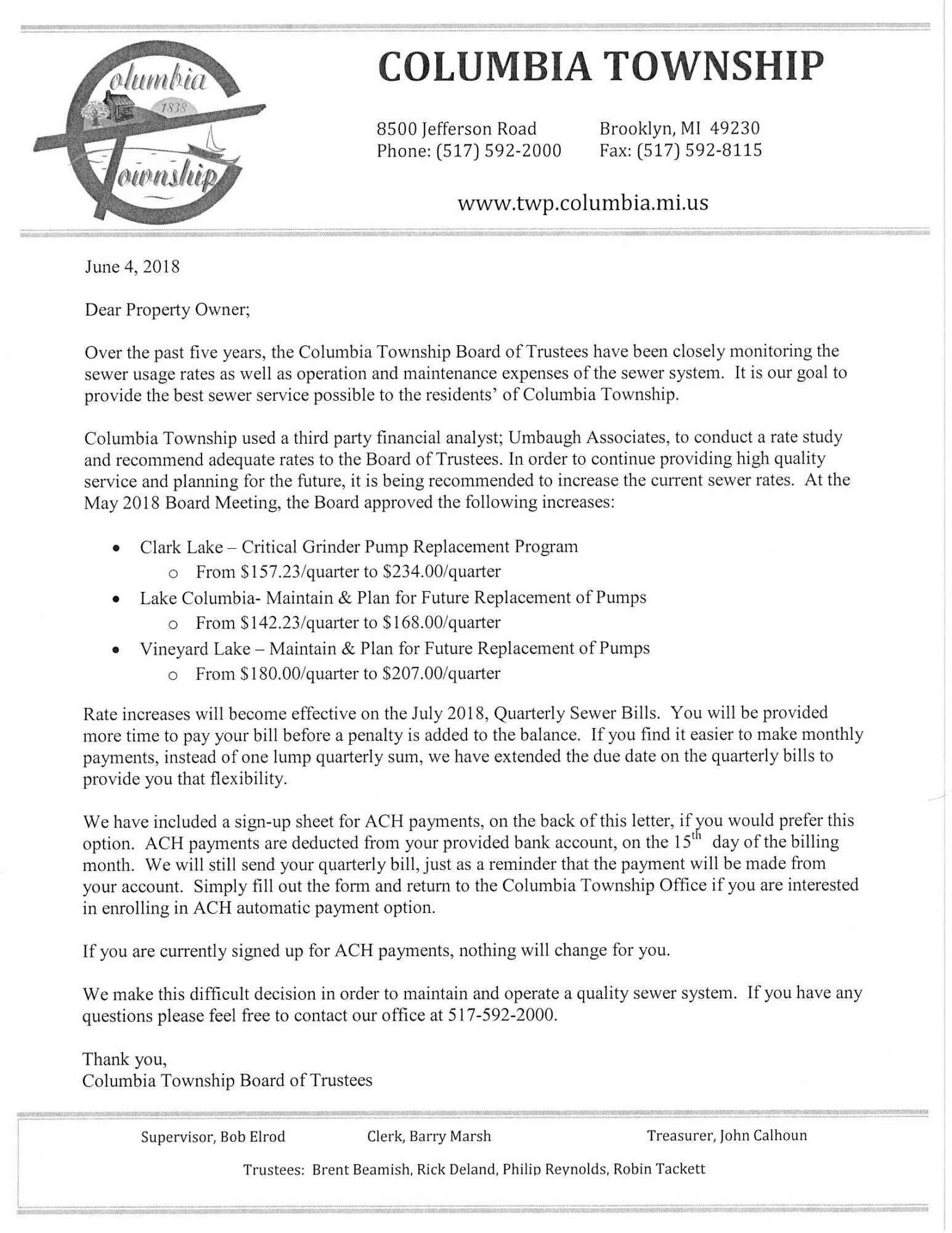