Columbia Township recently mailed a second notice regarding Clark Lake’s weed program.  This marks the final stage of a renewal of the weed program that has so successfully defended Clark Lake’s waters over the last seven years. 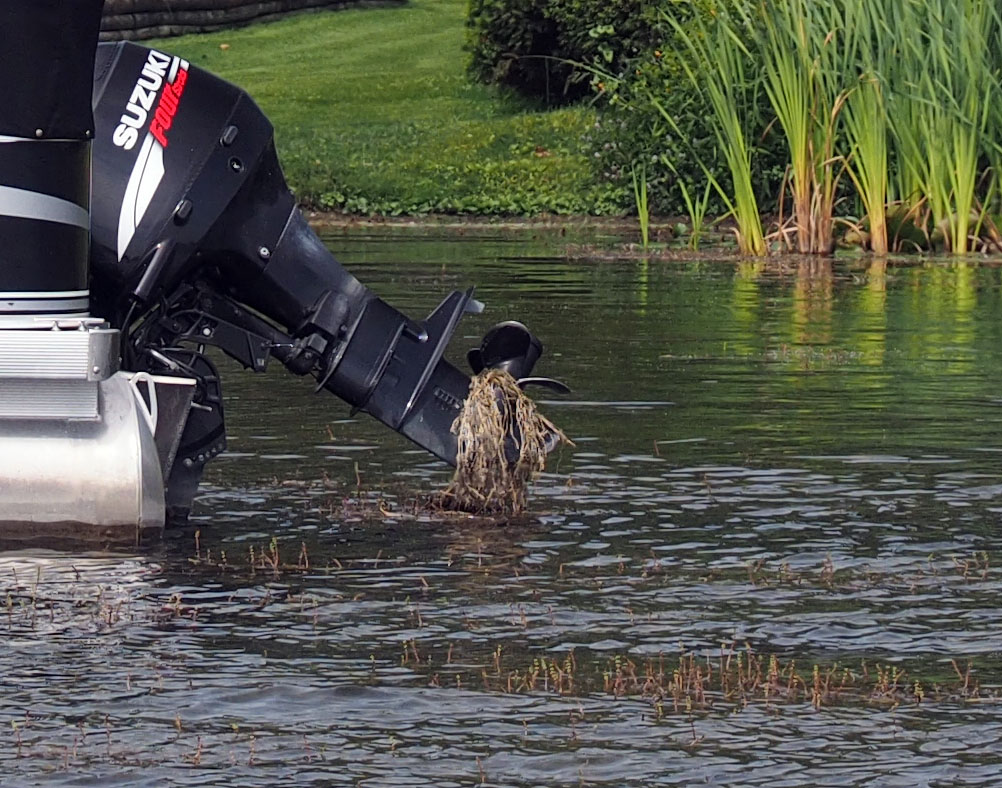 Here’s some background. In 2014 Clark Lakers noticed a rapidly-growing problem.  Weeds were taking over large sections of the lake.  One resident described it as “an Amazon jungle lurking an inch below the surface.”  If you went through an affected area, a raft ride might be delayed two or three times to clear the prop of weeds.  Mounds of weeds were floating from one area of the lake to another.  Residents were alarmed.

A couple Clark Lake residents took action by collecting samples, and them sending out to be analyzed. The verdict?  Clark Lake was under attack by hybrid Eurasian water milfoil (HEWM).  Concerned residents formed the Invasive Species Committee.  Their research uncovered a troubled prognosis.  A small cutting of this invasive weed multiplies exponentially.  They talked to other communities and found this–lakes that didn’t take action paid a price.  Weeds diminished boating, fishing, destroyed natural habitat, and property values decreased in some situations. 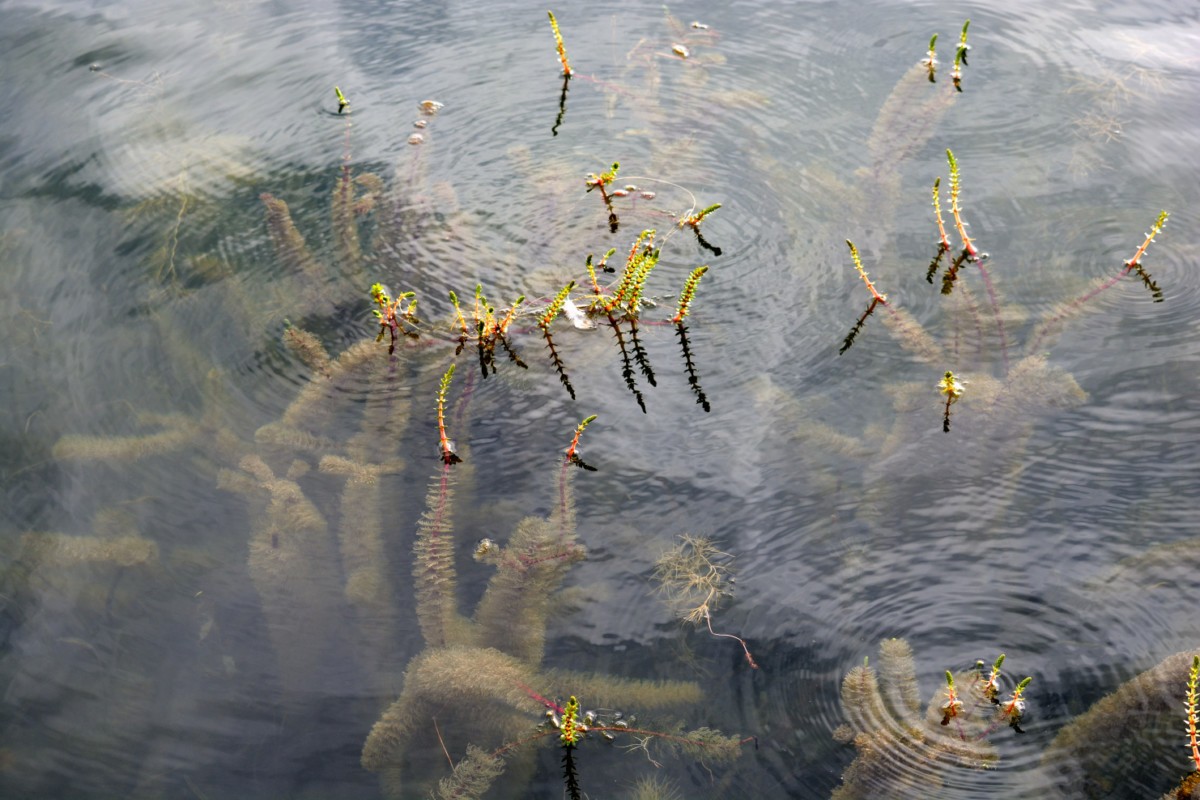 What to do?  Forming a special assessment district (SAD) would allow full lake treatment and cover costs.  Committee members took on a huge task, going door to door and reaching 70% of lakefront owners.  They found strong support—95% signed the petition to form the SAD.

Once the program was established, early efforts achieved moderate success.  The results of the 2019 full lake treatment were nothing short of spectacular.  Data compiled from surveys illustrates the progress. 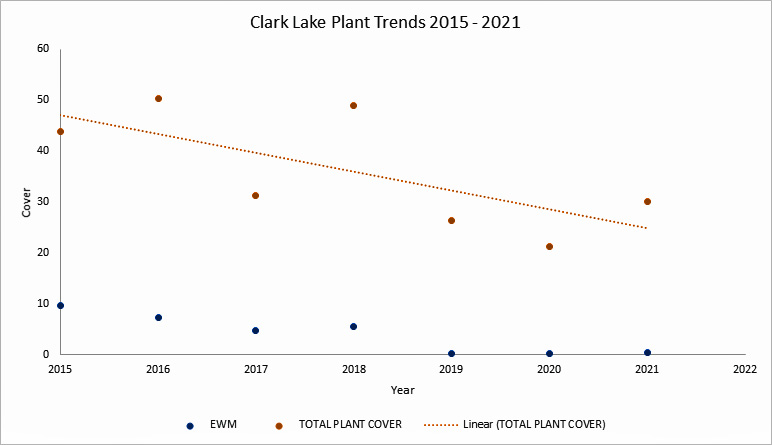 The chart shows the total plant cover, or general “weediness” of the lake.  As the HEWM (or EWM in the chart) has decreased, this number has gone down. The reason is not necessarily because of fewer plants, but the native plant species do not grow to the density of the HEWM.  The weed program only affects invasive species.

Last summer, the invader began to reappear, perhaps not a surprise given the number of boats visiting from infected lakes. The contractor, PLM, treated the specific areas that you see in this map. 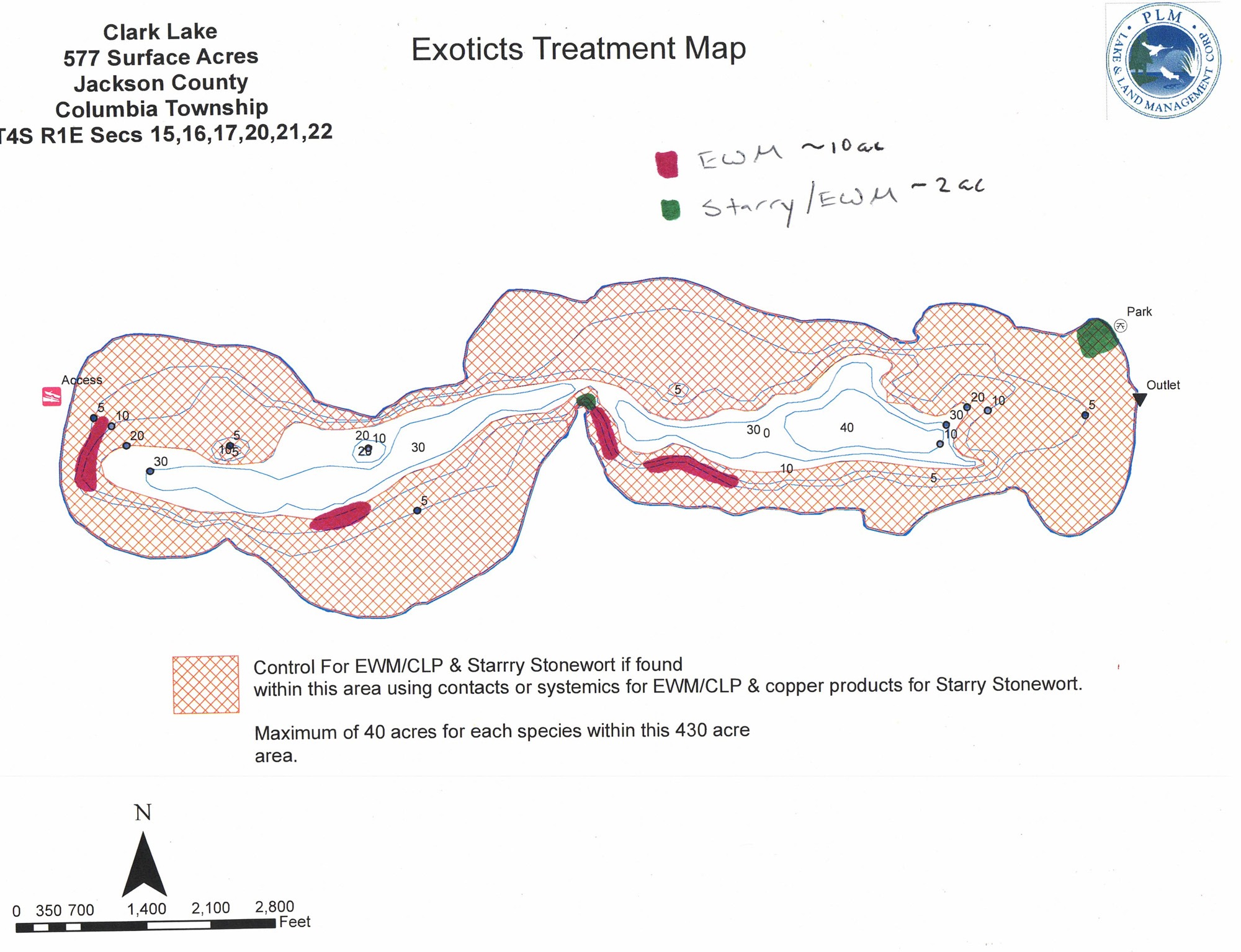 Over the last couple years, a new threat appeared—starry stonewort.  This algae masquerades as a weed.  It can be very aggressive growing to heights of 7 feet and so dense that no person or fish could move through it.  Some nearby lakes are grappling with out-of-control attacks.  At Clark Lake, it has been treated at Eagle Point and in the area around the County Park.

A reasonable question is “when will it end?”  It’s ongoing. Current strains are reintroduced by visiting boats, new strains can combine with existing native or hybrid plants, and a new threat could materialize at any moment.

Another question regards responsibility.  Shouldn’t others who use the lake have to take precautions or pay for the treatment?  In the best of worlds, the answer to both is yes.  Yet, as you visit practical scenarios that would accomplish those objectives, you quickly find unbelievable complications.  Putting this into the perspective of another question provides its own answer.  What kind of result do lakefront property owners desire?  A lake with weeds under control or a lake facing a nightmarish tangled mess?

The Clark Lake Spirit Foundation and the Invasive Species Committee are comprised of fellow Clark Lake residents.  Both have told the Township they support the renewal of the SAD.

The cost of the expiring program is $64 per year for each lakefront property owner. The new term reduces that amount to $60.  A bargain, considering the effective results achieved.