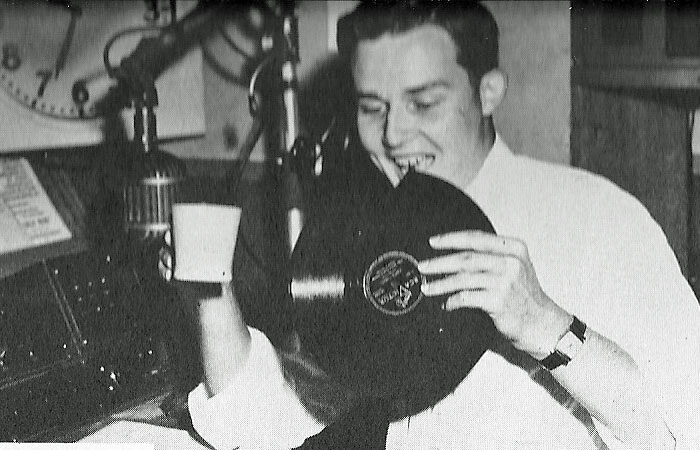 Many kids growing up struggle to find what kind of work they want to do. I am grateful to say that I never had that problem. From very early on I was fascinated with radio. When in the first grade, I started the day listening to what my mother listened to–Chuck Parmelee and the Alarm Clock on WSPD. The radio went on just before 7 am, and there was Edward C. Kutz with the grain report sponsored by the Anderson’s of Maumee, followed by a commercial jingle for “Those big red Farmall Tractors, International, Tractors…”. After Jim Uebelhart’s news (he ended it by saying “that’s the news around the corner and around the world”), Chuck would play his theme and a song. Then came commercials: Pall Mall cigarettes “outstanding and they are mild” or “call for Phillip Morris.” Later I would have a radio of my own by my bed and listen to the Happy Fellas on Radio 80 CKLW to hear if someone won the “Quicky-Quiz Jackpot” or Rendezvous with Lou (Fiedler) for the hits of the day. Radio definitely had a hold of me. 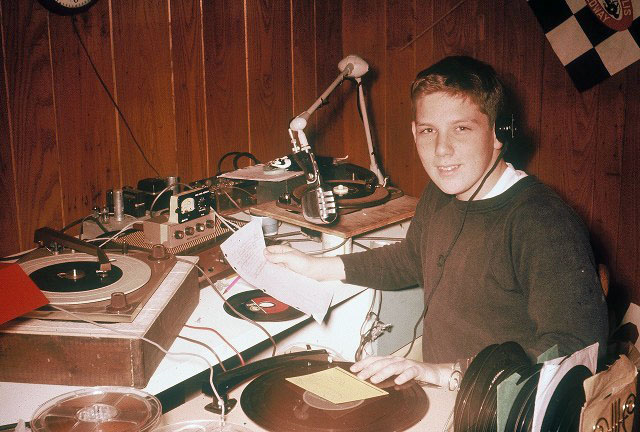 By the time I started high school in Toledo our family had moved from Hampton Park to Old Orchard. I lucked out. My bedroom was large and perfectly accommodated the latest iteration of my radio studio. In the summer, operations moved to my bedroom at Clark Lake. In Toledo, my radio station was WRPB Radio 90. At the lake, it was WRPB Radio 1220. With a set screw, you could change the frequency of the small 9-volt AM transmitter to wherever there was a blank spot on the dial. That meant having to record different station IDs for each location. But as you might guess, that didn’t bother me.

Commercials were universal. I’d visit Toledo radio stations and ask them to give me their castoffs. The commercials, or spots, were recorded on either a vinyl disc like an LP or on an electrical transcription. Called ET’s, electrical transcriptions also ran at 33 1/3 but each was individually recorded by a disc cutter on a 12-inch aluminum plate coated with lacquer on each side. Like the aroma of a freshly printed ditto sheet at school, these had a distinctive, and I thought, enticing odor. One disc that I acquired had custom sung radio station jingles for WTOL. That was really cool!

As you see in the photo, I now had three turntables, a microphone on a semi-professional stand, and a tape recorder. I could either do a live show and use the tape recorder for playback of commercials and station IDs or forgo its use as a playback device and record a show on it. I found good recording tape (that still works to this day) and bought many $1 rolls at Lane Drug in Westgate. 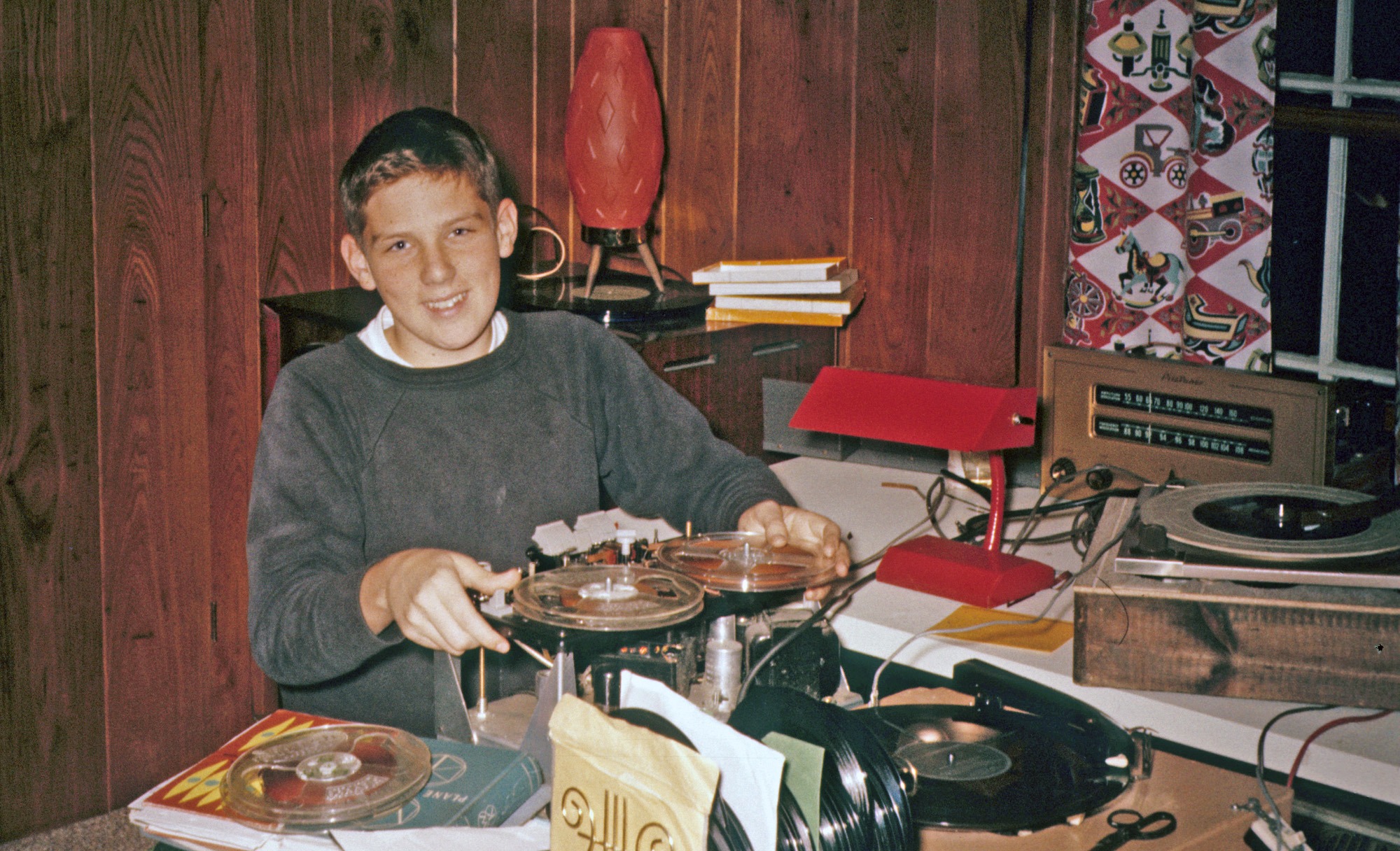 Others were involved. There were three or four of us at DeVilbiss who had a strong interest in radio. Bob Friedmar, who lived on Drummond Road in Old Orchard, and I formed a network. Over the network, one of us would create a show at his house, transmit it over the phone, and the show would be recorded at the other end.

Bob and I were all about Ma Bell. For entertainment, we would call directory assistance in faraway locations (it was free). Or prank people. He and I would hop on our bikes and stalk phone trucks in the neighborhood. We’d ask for leftover wire and other goodies that the installer could part with. Having a couple of opportunities to watch installers in action, I learned that some of them were artists. They were able to route the four-strand phone wire around woodwork in a way that was almost beautiful. Their staple gun had rounded staples that fit the contour of the wire. It inspired me to wire most of the rooms at Clark Lake with phones.

At the lake I would somehow convince my cousin from next door, Mike Ligibel, to join my radio adventures. I would write commercials and get Mike to voice them (he was older and his voice was an octave lower than mine at the time). 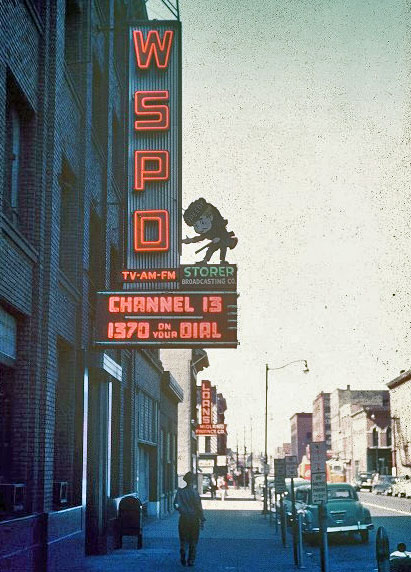 All was going well with radio and me. I visited WSPD on Saturday’s where they continued to tolerate me. I even performed minor tasks from time to time. WSPD was Toledo’s most listened to radio station, but it was formatted for adults. I had learned that I couldn’t hang around WTOD because it had a large teen audience and they shooed you away if you tried to hang out there. No kids showed up at WSPD, except for me. I had the place to myself as their only “kid.” I became acquainted with people who would later figure into my career like Bob Martz, Chuck Parmelee, Jerry Kiel, Ivan Harvey, Adam Gallan, and Jim Uebelhart.

Then my radio studio hit a speed bump. Unlike Bob Friedmar who had two tape recorders, I only had one. The control buttons were mechanical, not solenoid-operated like radio stations’ massive Ampex 351s that were built like tanks. My error was to use my home machine it as if it were an Ampex. I had broken some gizmo inside. The Voice of Music repair shop in the area was in East Toledo, the only place I could find a replacement gizmo. Uh, oh. For someone living on the west side, East Toledo was like a foreign country. You didn’t go there if you didn’t have to. You could be beaten just for walking down the street.  It was mysterious–and even dangerous. After all, East Toledo is where the oil refineries were. Once in a while, one of them would blow up. What if one of them exploded while you were over there! You could be killed, just like that. East Toledo is the only place on earth that has a Nevada street that is pronounced Ne-VA-dah (a long “A”). And mysterious? Not very far beyond East Toledo proper was the Around the Clock Grill. But what went on upstairs was something to satisfy another kind of appetite in a way that is only legal in Nevada, the state—not the street. Friends at school talked about the nefarious activity there, a lot. One friend claimed to have visited it and partaken of services rendered. He gave a lurid report on what went on upstairs. All of us listened in rapt attention. I wasn’t sure if I believed the story, but he had us listening and it became the basis for a considerable number of future conversations. (You want the details? Perhaps later.) So that’s what was in my mind as I drove to the east side in my Dad’s 1963 Impala hardtop. I found the repair shop, bought the replacement part and returned home without incident. All turned out well, and it was a confidence builder for a newly minted 16-year old driver. 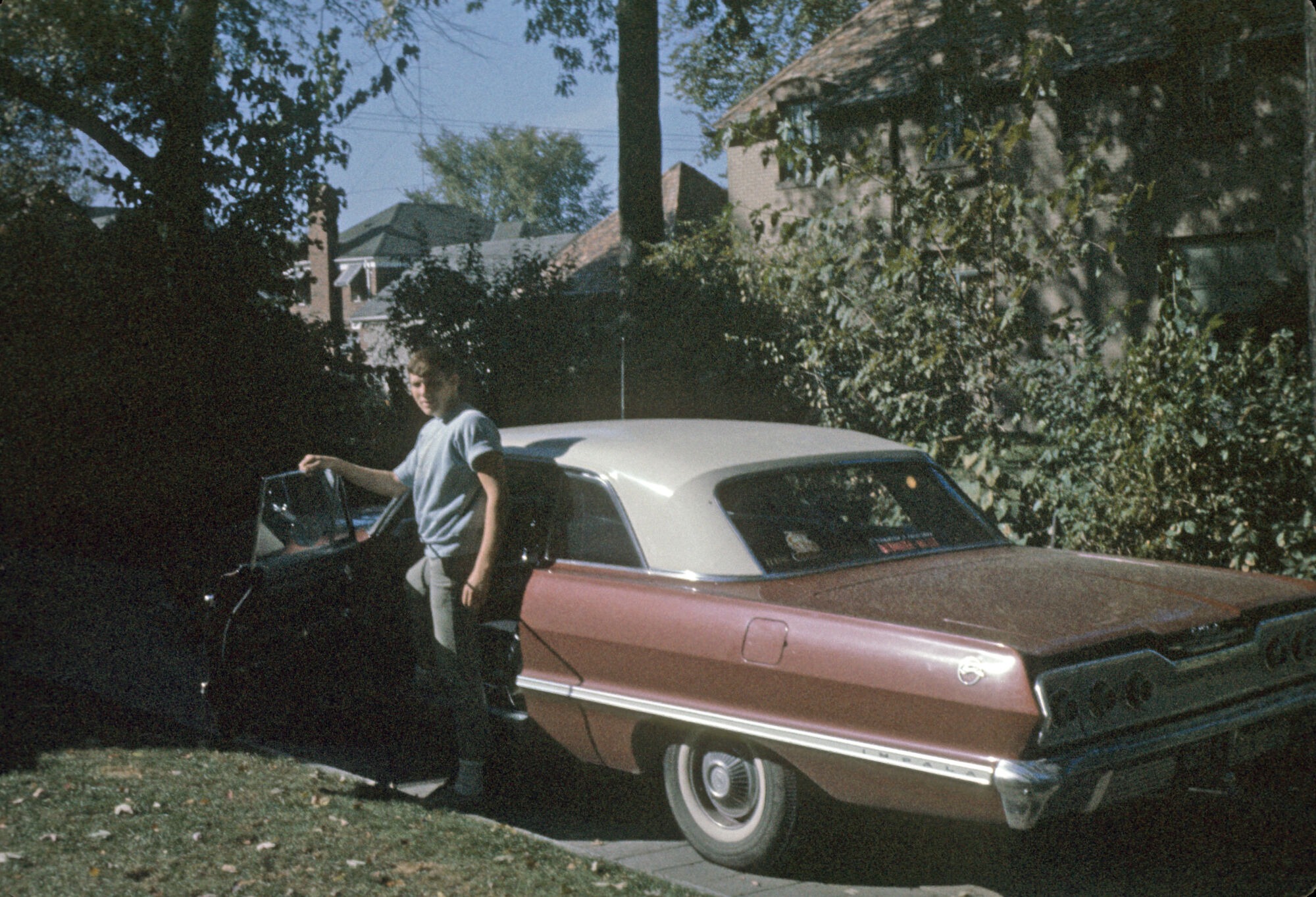 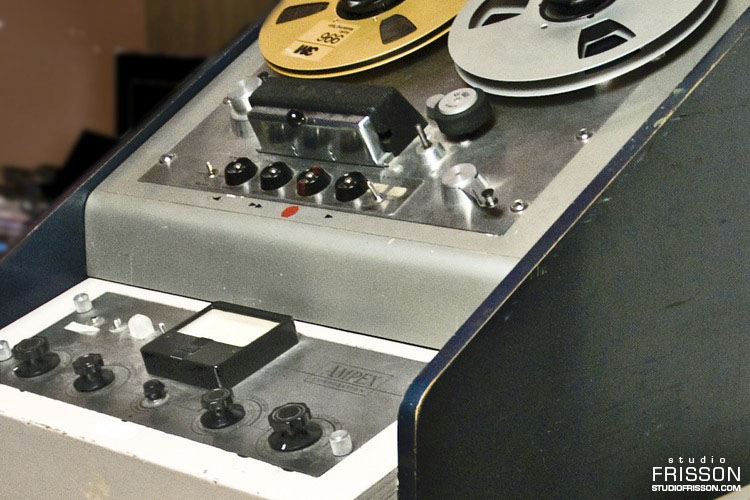 The Ampex 351 was a workhorse for both radio and recording studios. This one is still being used in Montreal, Quebec. Image by permission

So how did some of these forays into radio land lead to an actual job? It was 1965 and I had just graduated from high school and would enter Gettysburg College as a freshman in the fall. That summer I wanted to work in radio in the worst way. Bob Martz had moved around—from WSPD to WTOD, and now he was in Jackson programing WIBM. He was looking for a part timer and asked Chuck Parmelee if he knew of anyone. I had kept in touch with Chuck and told him I was looking for a summer job. Chuck recommended me to Bob, whom I hadn’t talked to in a long time. Chuck called me, I followed up with Bob, and was hired. I filled in for vacationing DJ’s, went out on remotes, and even had a show with my name on it—3 pm to midnight on Sundays. When Bob hired me, he asked “what name are you going to use on the air?” Apparently he thought “Belcher” was not all that cool. I became Dick Chatham up and at ‘em. I kept that on air name through my part time days while in college and in the Army. After two years in the service, I had an offer to stay in Colorado Springs as a program director, but longed to return home, close to Clark Lake. I talked to Bob Martz, now the general manager of WTOD, who recommended me to John Casey who was the new general manager at WIBM. My association with John Casey turned into a long one. I worked for John for three years in Jackson; and, in total, sixteen years in the Saginaw, Bay City, Midland and Flint market. At one point along the way, I found myself as the program director of WSPD. Jerry Kiel and some others who were around when I was a high school kid hanging out at the station were still there. But now I was the boss. Sort of intimidating at first!

Now about the brothel situation. I never had personal experience with the services they provided. Recently, for the sake of this article, I asked around. A Google search revealed that the place actually did exist. What’s more, some of the details provided by a high school friend of his alleged Around the Clock experience seem to match what I read on the web. If you’re interested, you can find a very well written piece by Lou Hebert. In addition to his work as a long time Toledo journalist, Lou had been part of a morning show, hosted by Bob Kelly on WRQN. Google: Around the Clock, Lou Hebert, Toledo Gazette or click here.

The early lesson learned about connectivity in radio proved more viable with each passing year. There are thousands of radio stations in the United States. In spite of that, it’s a small community in many ways. I have found that you may work for someone and you may later be his boss—or vice versa. Or you may be in a hot battle with an enemy radio station across the street and later work with a person whom you competed against—or vice versa. The lesson is no matter what, don’t burn a bridge. Radio proved to be a wonderful career. Of all the decisions that I would make, putting on earphones and stepping in front of a mic was among the best.