The Magic of Ideas

Eons ago the State of Michigan gave Jackson the choice of being home of the state prison or the University of Michigan. The city fathers chose the prison under the theory that you would never run out of potential clients. So the Wolverines had to make do with Ann Arbor.

It was in Jackson that I first became a radio program director. And it was the same station where an early Tonight Show host, Jack Paar, had worked–WIBM. One morning, I was putting the finishing touches on a promo when my boss, the general manager, walked in the studio. The promo had snippets of “time time time…” from Simon & Garfunkel’s “Lazy Shade of Winter” and Chamber Brothers “Time Has Come Today.” The promo reminded listeners that daylight savings time was ending that weekend and that clocks should go back one hour. After hearing it, the GM said “that’s the most creative thing you’ve done!” At first I was pleased by the compliment, but later I stressed out. I thought “what about my three hour morning show and all the other stuff?” I wondered–was I really creative enough? I pondered that a lot and tried to understand creativity and to learn how to find ideas.

Fast forward to the mid-90s. I was in awe of the station that had recently put me in the program director’s chair. WHAS blowtorched Louisville with 50,000 watts. At the transmitter site, you could hold up a fluorescent tube and it would glow without being connected to anything. When the sun went down the mighty non-directional signal bounced off the ionosphere and WHAS could be heard in 38 states. The hosts of this news-talk station owned the market. They had SWAGGER, and the audience loved them. At one point I ran their names through a perceptual study only to find a perplexed research consultant on the phone “I’ve never seen results like this at any station, anywhere…your hosts top them all—I’m amazed!” Wayne Perkey, Jane Norris, Terry Meiners, Tony Cruise, Joe Elliot and Joe Donovan wielded radio superpowers.

It was fall of 1995 and I had been program director since June. The summer Arbitron had been fine, but the more important fall rating was about to begin. There was not enough money for an expensive TV campaign, my first choice. I had to make the best with what was there. One afternoon, the billboard sales rep was in my office pitching me some mock ups. I knew we could afford a 100- showing, but would his creative be strong enough to break through the visual noise and get enough attention to move the needle? As he was talking, an epiphany dropped out of the sky and into my head. I asked the rep “can you change the copy a week-and-a-half into the showing?” Here was the idea—for phase 1 of the showing, display the first name, and first name only of each host in big letters, each on his or her own billboard. 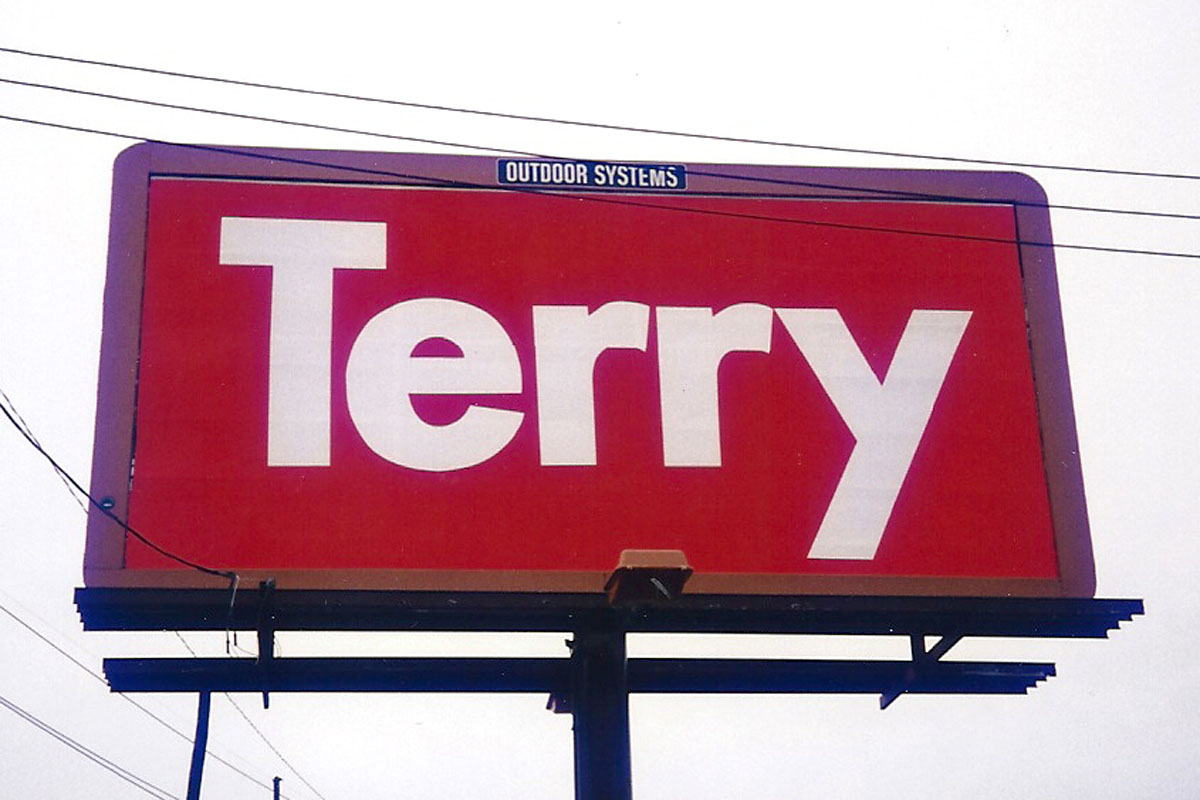 Then change the copy in phase 2 to show the host’s full name along with the WHAS logo. He said “yes, we can do that.” The boards went up. Indeed there were skeptics inside the building—that is, until the buzz began. A competing radio station spent the morning asking “who is Terry…who’s Wayne…Jane…who are these people?” Our sales department told me about chatter on the streets. TV picked up on it and interviewed me right about the time phase 2 was posted. Very cool!! Promotion via word of mouth, competitors, and earned media. The Arbitron god also smiled upon us that fall. An idea that had landed in the right place at the right time came equipped with the power to move numbers. 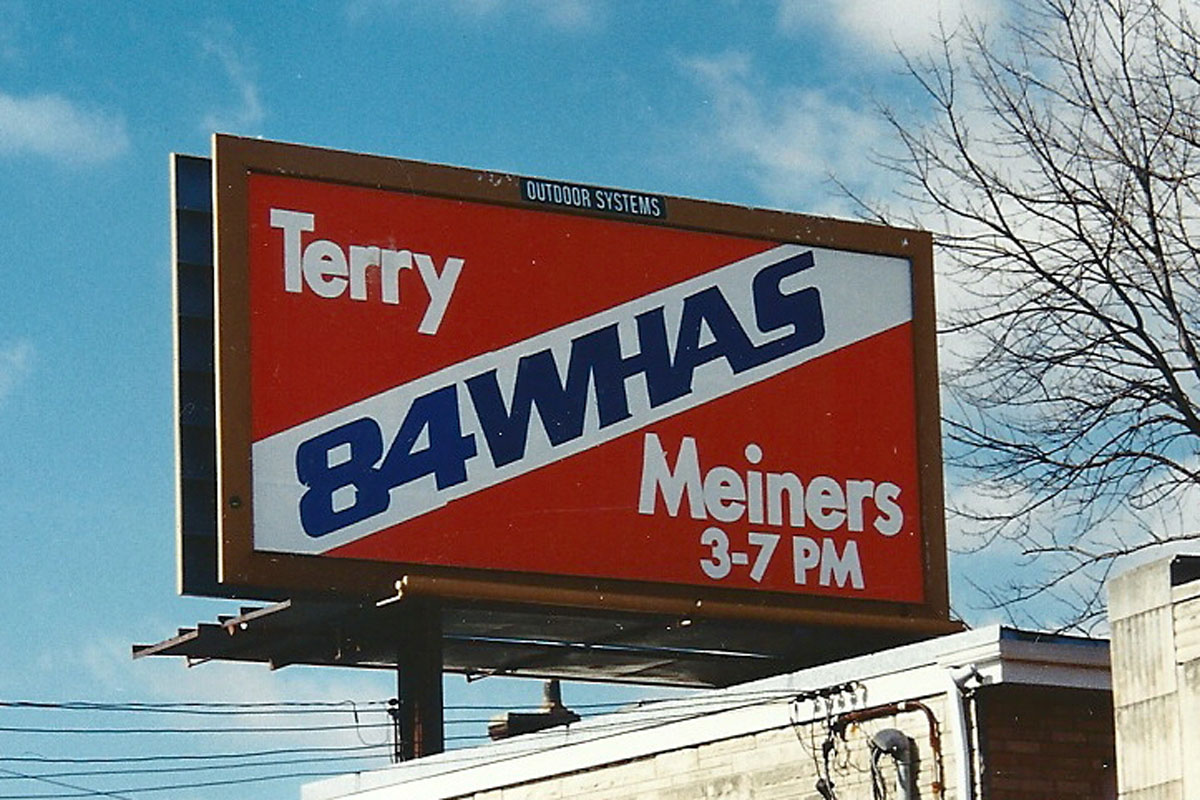 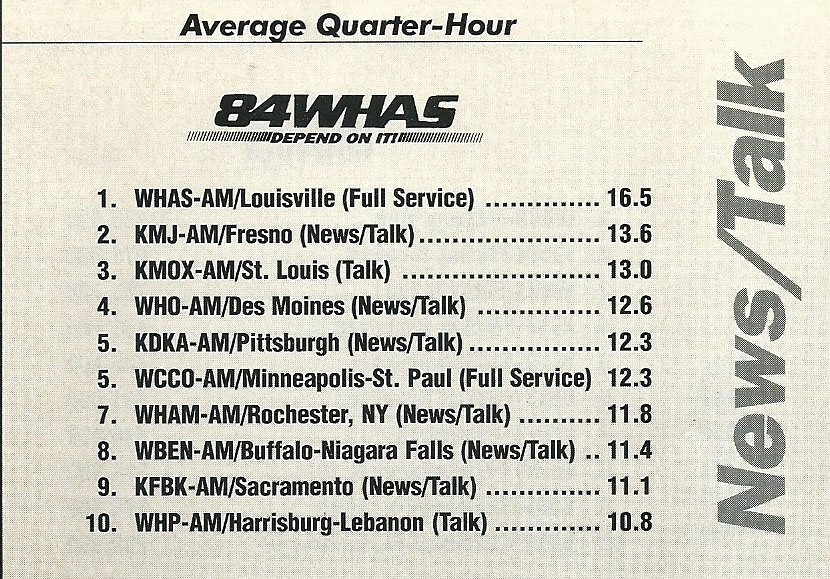 In radio, ideas are sometimes “adapted,” meaning that you take an idea used elsewhere and apply it to your own needs. This idea involved our morning star, Wayne Perkey and elder-statesman talk show host Milton Metz. I swear that Wayne knew everyone in Louisville and their third cousins. Walking with Wayne to a downtown lunch spot two blocks away could take a half-hour as he stopped to talk. Wayne knew everyone’s name–and could recite the story of their lost relatives. Amazing. I asked Melton Metz, also highly respected and well known, to record this announcement. In his impressive voice, he intoned “On Friday, my friend and colleague Wayne Perkey, will make an announcement. Thank you.” That was it, less than 10 seconds. It ran hourly for three days. Only the air staff and GM knew what would happen. And it was having the desired effect. The sales department was hearing about it in sponsorville and driving me crazy because I wouldn’t reveal the secret. So what happened on that Friday? It was Friday the 13th and Wayne announced he was superstitious and thus, would not get out of bed. He did his show from bed, on the steps of Louisville’s city hall. As the morning progressed I thought “this is working.” I was fairly certain we had brought attention to the station in a way that worked well for Wayne.

Then, an unexpected dust up. As Wayne and I chatted during a break, we noticed a commotion immediately across the street. What was going on? Unbeknownst to either of us, it was National Coming Out Day and a pride demonstration was forming. Now please remember this was the 1990s. Don’t ask, don’t tell was very controversial. Wayne said to me “what’s taken me years to build up you’ve taken down in one day!” He said it with a smile, and I hoped he was joking, but I still worried. Those concerns vanished when the Arbitron results came in. Was this stunt the reason for improved ratings? After all, the numbers were already very good. It’s hard to know for sure, but good ideas that showcase talent and station do help.

A good idea doesn’t care who thinks it. So being a good listener is essential. WIOG, Saginaw-Bay City-Midland, was growing by leaps and bounds in the ratings. Eventually WIOG moved up the dial and increased power from 3000 to 86,000 watts. As the New 102, WIOG would achieve and maintain a 30-share status with an unduplicated weekly cumulative audience of over 500,000 in the Total Survey Area (included Flint). Starting in fall 1984, this Top 40 station was gaining momentum as it turned into a monster promotional machine. Every hour during the day, our DJ’s made a Free Money call to random households—every call worth between $1000 and $10,000 dollars. “Just tell us the amount the DJ announced when we call you–and you win it!” Simple, well executed and, as competitors found out, dangerously effective. We weren’t taking prisoners. This great idea came from our consultant–we had listened.

There was another powerful idea associated with it, and I was blown away by how it occurred. Early on, WIOG needed more street presence, so we bought a van. We brainstormed on what to name it, finally settling on “WIOG Street Van”, an idea filched from a Lansing station. I wasn’t thrilled but no better idea had emerged. That was about to change.  The dealership called to tell me “your van is ready.” I arrived and soon spotted the shiny black Chevy Astro Van. An attendant wanted to know if I were from WIOG.  Then he asked THE question “is this the new Free Money Van?” I got chills and said YES! It IS the FREE MONEY VAN!  The perfect name. How come “Free Money Van” had eluded all of us at the station? I mulled that over–and then concluded that it didn’t matter. Sometimes your listeners know more about your station than you do.  A good idea can come from anywhere, including the service bay at Martin Chevrolet. 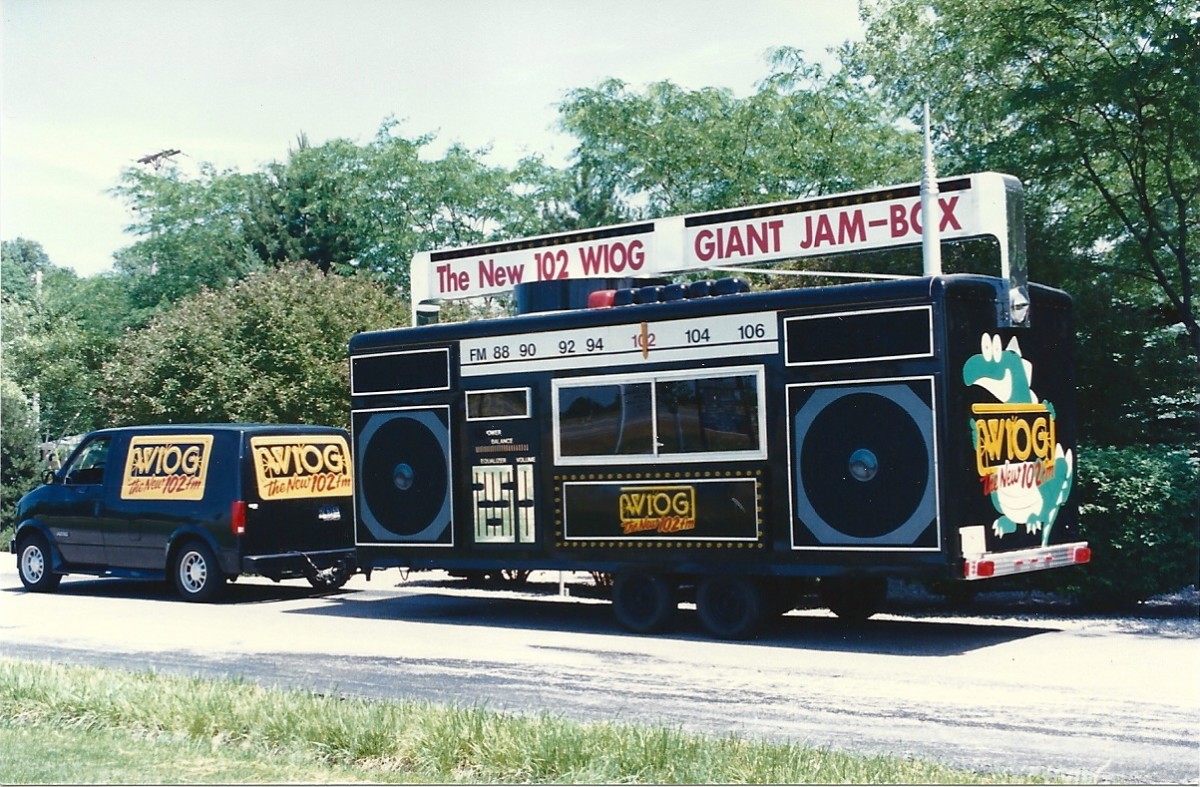 The Free Money Van towing a later addition to the fleet: the Giant Jam Box

The following is a clipping from the Detroit Free Press, February 28, 1987.  To learn how a last minute idea saved the “convoluted” process of switching from 106.3 to 102.5, please read this short article; then, the story below it. 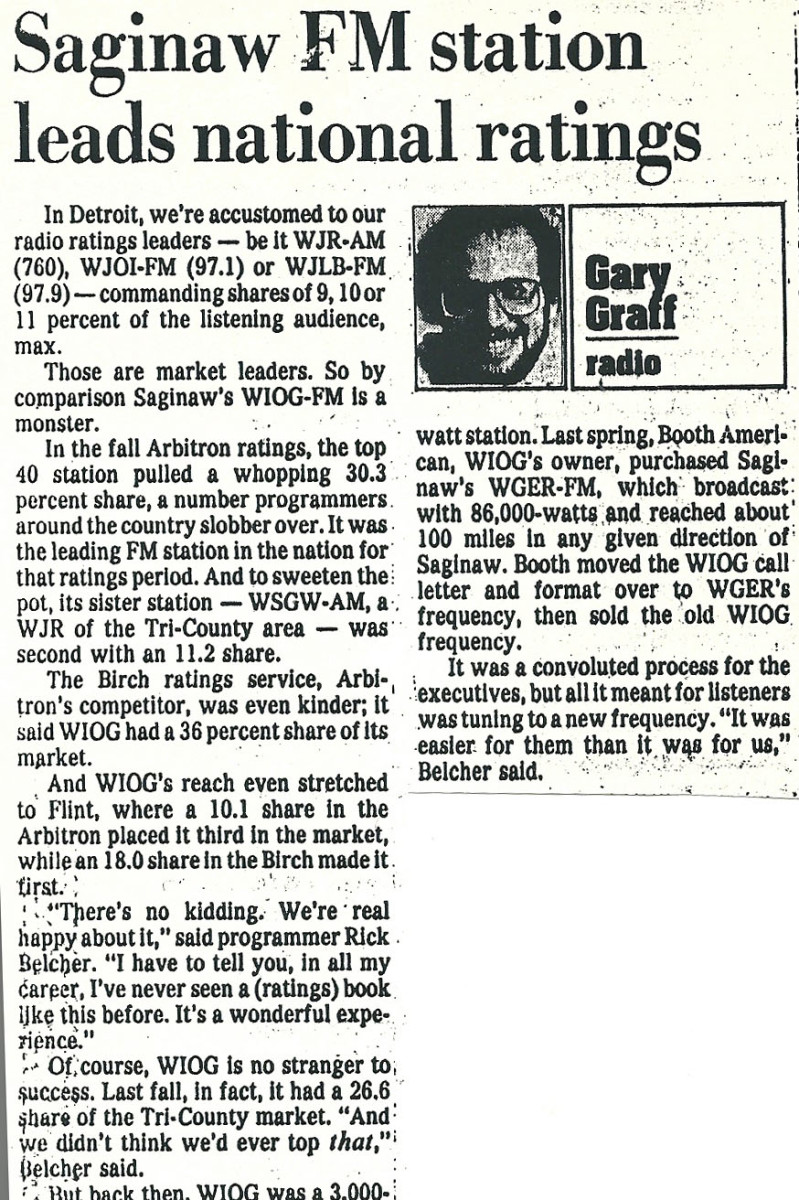 The process of purchasing the 102.5 and selling the 106.3 frequency to a third party dragged on, but the cost and effort would be worth it.  102.5 offered far more coverage.  Up to the last minute we did not know when the deal would get done.  There was no way to alert listeners to the coming change and our conversation in the marketplace was sotto voce. One fall day in 1986, our attorneys said it looked like it would finally happen.  Then they said, “there’s another glitch.” Then on and off a couple more times. By late afternoon, the deal was on again and shortly before 5 pm, they said “make the switch.”

In anticipation, our technical director had ordered high quality 15 kc stereo pairs (phone lines) to get the audio from the studio to the new transmitter site.  Then a major snag.  There had been heavy rains and the new transmitter site, in the middle of a sugar beet field, was flooded.  The owner of 102.5 had stayed on the air by using their backup transmitter 20 miles away in Bay City.  Since our company had decided not to keep that site, no audio lines had been installed nor could we operate it remotely from the Tittabawassee Road studios in Saginaw.  Very bad news.  I asked the attorneys if we could delay the transfer until this technical problem could be worked out. “No.  You own it, you must operate it, and the new owner of 106.3 will have control of that frequency by midnight.” What were we suppose to do–run a 20 mile string with tin cans on either end?  The Bay City transmitter site had no studio facility nor could one be put together on short notice.  But in the midst of our collective angst, an idea in the form of a gray box about the size of large shoe box flashed in my head–the Marti!  A Marti makes possible remote broadcasts.  A jock can set it up at a car dealership and beam a fairly good sounding signal back to the studio.  I asked our technical director “Can you reconfigure our Marti to transmit from the studio and receive the signal 20 miles at the Bay City transmitter site?  He said, “maybe.”  Like MacGyver, he and our chief engineer went to work on it.  They dismantled the receiver in Saginaw, and reinstalled it in Bay City.  They set up the sending device at the studio, aimed the antennas, turned it on–and yes, it did work.  It was not stereo nor did it have the signature, larger-than-life sound that our bold audio processing created.  But we got it on the air.  And an idea in the form of a gray metal box saved the day.

Our morning show host knew the frequency change was coming, but didn’t know when.  It was close to midnight when the switch took place, so I didn’t call him.  I just left a note–“we can finally drop ‘Hits 106’ for ‘The New 102 WIOG’.”   Turning on his car radio on the way in, Dean Myers was as surprised as our listeners.  WIOG listeners woke up to easy listening violin music on 106.3. And those looking for a Percy Faith melody at 102.5 were surprised to hear Huey Lewis and Phil Collins instead.  Did it create a buzz in the market?  Well, if throwing a pebble in a pond creates a ripple, this was like throwing a boulder into a bath tub. Later an ad agency principal told me “how you did that was sheer brilliance…”.  I quietly accepted the compliment, knowing full well the real circumstances.  Thank heavens for good ideas when you need them.  And if you don’t get credit for an idea you authored, know that you could get credit for something that wasn’t your idea at all!