My husband of 45 years would rather have a hot dog for dinner than a home cooked meal. He thinks of himself as a hot dog connoisseur and is convinced Coney Island hot dogs from Tommy Boadgieff’s former cart on Detroit Street are Jackson and Michigan’s finest. But it wasn’t always so. 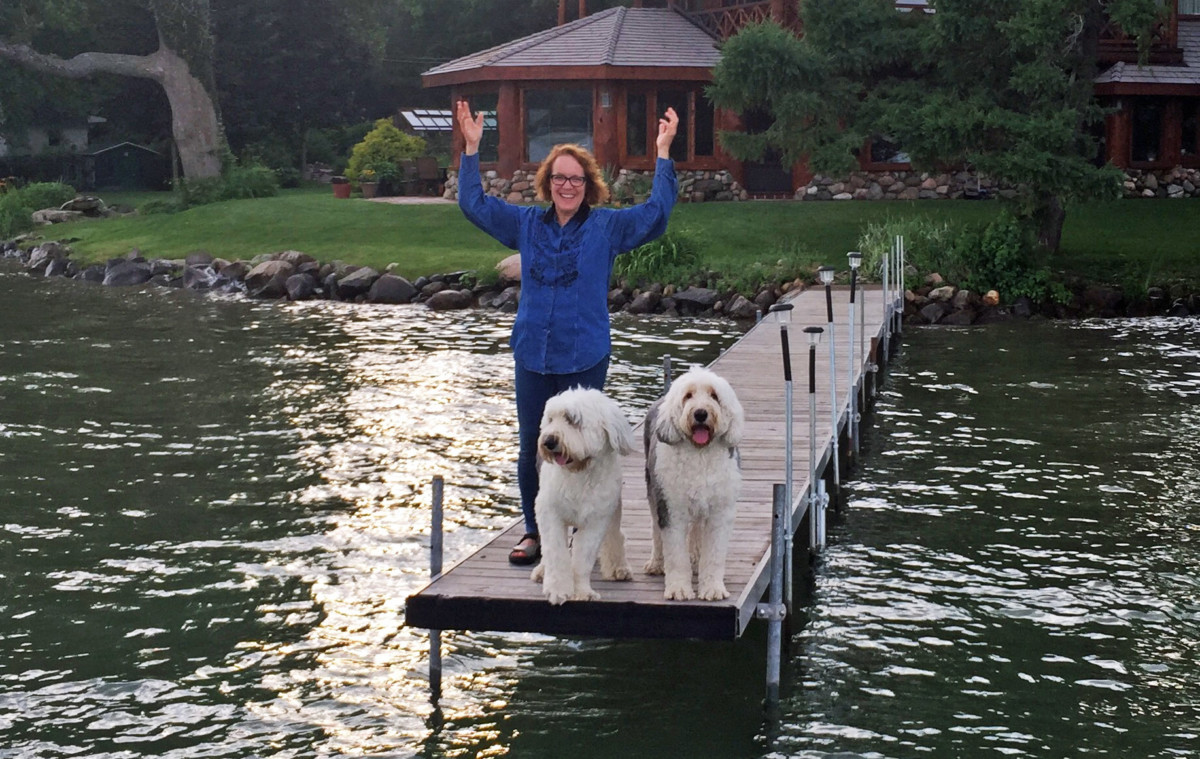 Laurie and Bob live on Kentucky Point–with Herbie and Zelda, two dogs of another kind.

“When I was eight or nine,” Bob said, “I discovered hot dogs at the Tip Top.” This root beer stand, gone since the 60’s, was located at the end of Ganson Street where it joined E. Michigan Avenue. “I liked the experience of eating the sandwich because it was easy to hold, no forks or knives were required, and it was lip-smacking good. With each hotdog I had the option to add freshly chopped or grilled onions, relish, mustard and/or ketchup. Tip Top dogs were a nickel apiece, and if you took 20 they threw in an extra for free. When I was 13 or 14 I liked the Tip Top for reasons other than the cuisine. I liked watching the girls who came in to eat the hotdogs.’’

The July 16 insert in Parade magazine reported the origins of the American hot dog: “A German baker, Charles Feltman, opened the first U.S. hot dog stand in New York City in 1871, selling sausages served in milk rolls. A Polish immigrant, Nathan Handwerker, opened his own stand in New York’s Coney Island in 1916. In 1923, two Greek immigrants, brothers Bill and Constantine Keros, opened a hot dog restaurant in Detroit, after sampling dogs in NYC en route from Ellis Island to Michigan. They topped the dogs with a traditional Greek “red sauce” and called them “Coney Dogs.”

Tommy Boadgieff claims the Coney Island Hotdog originated in Jackson, Michigan in 1914 with an immigrant from Macedonia. George Todoroff covered his signature pup with a beefheart based sauce, added chopped onions and mustard and served it inside a steamed bun. Tommy’s grandfather, Tom Christoff, became Todoroff’s partner in 1916. The families intermarried and spawned three other eateries: the Virginia Lunch, Todoroff’s Coney Island and Tommy’s hotdog cart on Detroit Street, all specializing in variations of the hotdog.

The Parade article added, “You can find them all over the U.S., from Michigan and Massachusetts to California and Florida, but you’ll find more Coneys in the Midwest than anywhere else. “The Coney Dog is a great unifier,” says Joe Grimm, co-author (with Katherine Yung) of Coney Detroit. “You sit down on a stool at the counter and you get a fast, cheap lunch. It could be a banker sitting next to a construction worker next to a young mother next to a college student. For that moment, everyone is on the same level.” 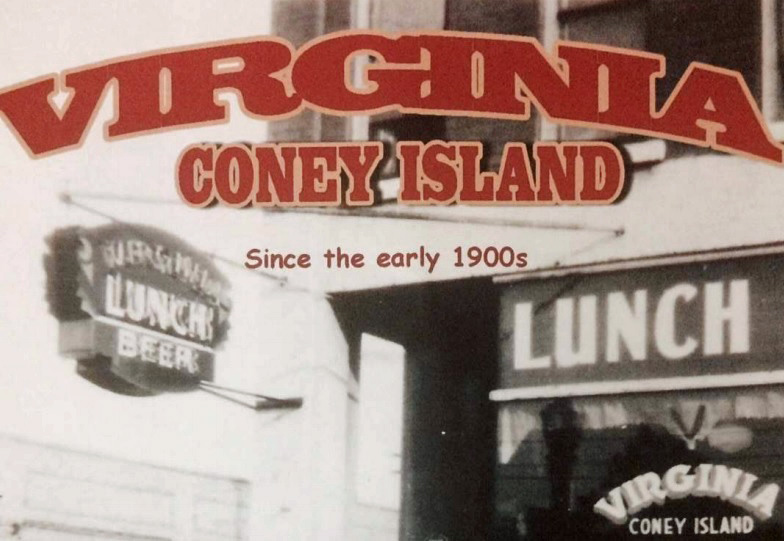 My husband’s five siblings were raised in Jackson eating Coney Dogs. Each had strong opinions about which of Jackson’s greasy spoons served the most flavorful and aesthetically pleasing dog.

Years ago when they were all in town for a family event, I exploited the opportunity to reach a consensus on the dispute. Was the most succulent hot dog served up from the Jackson Coney Island, or was it the Virginia Lunch? Both restaurants were on the same block as the train station. Todoroff’s Coney Island was the third contender on the corner of Cooper and Ganson streets. This is before Tommy’s Detroit Street stand.

“So, what’s it gonna be?” I challenged Zelda, Bill, Jack, Jeanette, Herb and Bob.  I had purchased a dozen dogs from each venue. The taste test was blind. I insisted on secret ballots.

One work of culinary art floated to the top and won the family’s prestigious “top dog” award thirty years ago. The Virginia Lunch’s entry came in first. Their Coney Island hotdog was tucked inside a steamed bun, covered with ground meat that had been grilled with onions and mysterious spices, and topped to overflowing with crunchy chopped onions and slurry of yellow mustard. But that was thirty years ago. 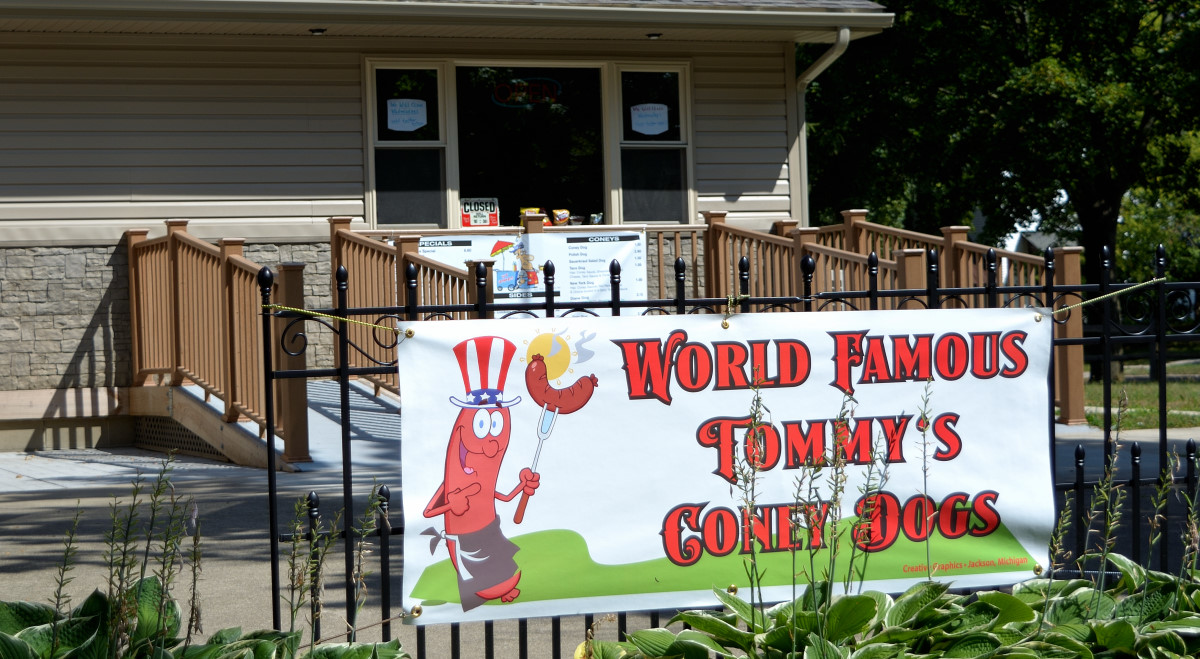 When Tommy Boadgieff opened his cart on Detroit Street he snapped photos of his customers and soon was able to greet them by name. He also served a darn good dog. Over the past few years his hotdogs won the “Top Dog” record with our family. It didn’t hurt that Bob and his friends liked the man. But then Boadgieff closed his street cart last summer to expand his kitchen and patio. Tommy’s new digs reopened at his Detroit Street location the week of July 24. Some customers waited in line for over an hour to wrap their lips around his signature Tommy Dog. 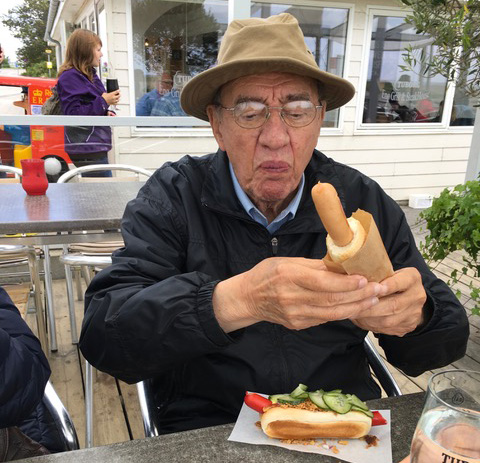 … until our recent vacation in Denmark. Our nephew Philip, the son of Jack, the most vocal judge on the family sausage court, introduced us to a very different style of hot dog. His wife, Elisabeth, is Danish. In the young couple’s opinion the best hotdog in Denmark is served at a seaside resort ten minutes from their home in Naestved.

The tasty bright red dog comes encircled in bread in what looks like a tube. Ketchup or French dressing is squirted down the open end before the grilled sausage is inserted. I took a chance on the Danish dog with French dressing. It was delicious, and so easy to eat … no onions or mustard overflowing my fingers, or dripping down my blouse. To be fair, Bob also ordered the Danish standard dog in a steamed bun … topped with sliced cucumbers.  That was a surprise.

“The only downside to the Danish dog,” Bob recalled after finishing his second, “is when I tip the tube to bite the meat, the condiments slide down and pool inside the closed end. The final meatless bite is heavy on the ketchup.”

When asked which hotdog is best on a global scale, the family gourmand said, “I’m undecided. I may need another round of taste tests.”