One warm day in early June found me wading in the shallows, repairing the damage created by the movement of spring ice when it decided to leave the lake. It is an interesting fact, known to those who live anywhere along a shore that the day the winter’s ice goes out demonstrated the power of the proverbial “irresistible force.’ Even ice too thin to support your weight, perhaps as little as an inch-and-a-half, can still create a powerful force when driven by wind – the weight of 1/12 inches of ice covering the west half of the lake would be nearly 40,000 tons. If you get that much ice moving, ever so slowly, with a modest breeze pushing, it  will still,   snap an 8-inch wood post like a matchstick, bend a steel I-beam, or in my case move large boulders from my breakwater unto my neighbors shore. Thus, every summer I wade around in the shallow water re-stacking rocks so that the ice can have something to play with next spring, and my shoreline can be relatively protected. I suppose I could put in a large, steel-beam breakwater like all of the newer places have, but they aren’t nearly as pretty or natural as a jumble of native boulders that has been piled along the shore since Hector was a pup. I grew up rebuilding the breakwater most summers with Dad, and will probably continue doing it until I join him at that perfect lake home in the next world. 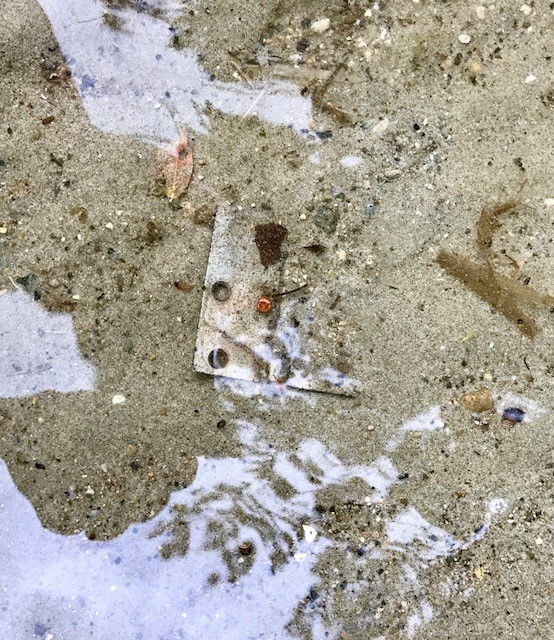 However, working in the shifting sand of the shallows with a spade will usually unearth a relic or two from ages past. And slipping in among the usual compliment of broken glass, blackened nails, twisted baling wire, etc. an object with a story occasionally appears. I have a small cabinet on the porch that displays some of this discovered material, the most interesting being a rust-encrusted, iron, guy-wire stanchion from one of the old gaff-rigged pleasure sloops that sailed the lake in the early 1910’s.

This day’s find was a 3-inch-square steel hinge, slightly blackened and rusted by the buried years, but in far better shape that if it had been iron. Three screw holes decorate each side and it was frozen in the position of a newly-hatched, grey, butterfly, drying its wings. As is the case with all archeological finds, speculation quickly arose to its history and how it became in the sand on my shoreline.

In this case, the history was relatively short, probably dating to about fifty-five or sixty years ago. I actually thought I recognized it. As an early teenager, I did a lot of fishing with Dad. We usually went out in the early morning to cast into weedy shallows, or troll the deeper weed-beds for largemouth black bass. To secure the fish while we accumulated enough to justify cleaning them, we manufactured a rectangular live box out of pine two-by-fours, covered with chicken-wire fencing of a small enough grid to keep the smaller blue-gills from escaping, It had a hinged top for easier access when moving fish in from the stringer, or out to the scaling table by the garage.  It usually sat next to the dock in about two-and-a-half feet of water so the fish had plenty of room to swim. This hinge was exactly the size of those used for the top.

I don’t recall when we dismantled the aging fish box, probably when the two-by-four supports became too rotten, and after we both ceased spending as much time fishing together. Eventually I grew old enough that I spent my summers summer working to pay for college, and Dad began to fish with lake neighbor Dick Swain, who also happened to be my sister Ann’s father-in-law. Dick liked to still fish with a long cane pole and nightcrawlers. This method caught lots of pan fish – bluegill, sunfish, rock bass and yellow perch. One year they counted over a thousand fish cleaned by the Fourth-of-July. There were so many caught that they were always cleaned as soon as they came in, and frozen immediately, usually in open-topped, waxed-cardboard milk cartons. Fish-fries were a weekly occurrence under this plan. The fish dinner was usually enhanced by corn-on-the-cob when it came in season and, courtesy of Dick’s wife Ruth, a pie made of the black raspberries we gathered from the area roadsides. With fish catches of this size, the live box was no longer a critical part of our dock equipment.

I’m sure the live box was taking apart in either the fall when the dock came out one year, or in the spring when it was decided that it wasn’t worth putting back in the water. Both efforts would have occurred near the house where it was stored, or up at the garage. Thus I find it hard to understand how the remaining pieces  could have easily found their way into the lake. But here was some semblance of evidence in my hand. The only other answer was that it had washed in over the decades from someone else’s construction project. Old cans and bottles find their way, via the wind-driven currents, into the shallows with great regularity. Why not an old hinge? Or perhaps it was lost in the ashes of a bonfire at some winter ice-skating party, eventually falling through the ice. In fact, I think the uncertainty and romance of these later ideas makes a better story.  After all, Clark Lake has always been a place to find interesting stories if your look for them.