Having a Bad Day?

Having a bad day? Maybe, maybe not.

My radio career had just taken a step forward—I was now the operations manager/program director at WSGW, Saginaw-Bay City-Midland. I also hosted a full service morning show 6 to 10 am that consisted of news, weather, sports and every hour, a couple of songs. I encouraged the news person, Fred Krell, to participate as a co-host. I had quickly found that most people knew my new station not by the call letters, but as “Fred’s station.” Fred had a big voice and personality to match. I was not yet 30; he had 30 years on me, and I was his boss. Not only was he a great talent, Fred was also a great human being. We worked well together. 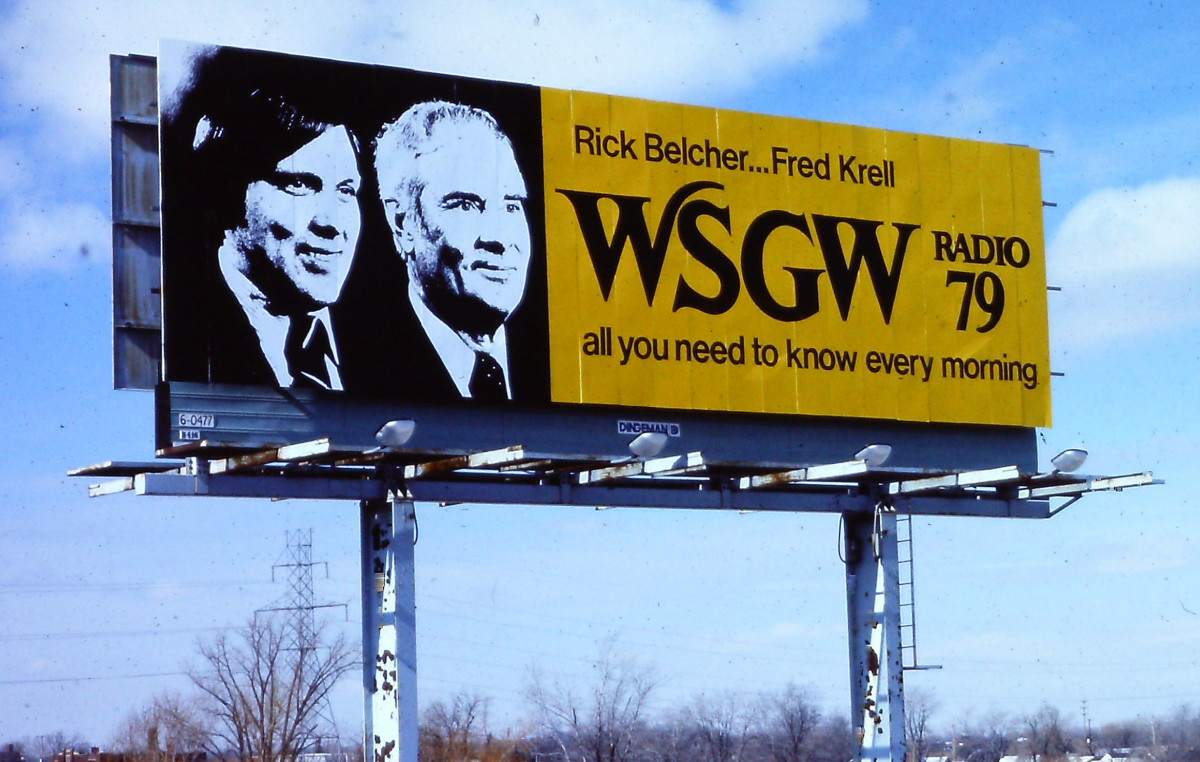 Opportunities sometimes come in disguise, and this one came courtesy of nature. About 4 am one winter morning, Cliff Graff, the chief engineer, called me at home. “An ice storm has taken down power in most of Saginaw County, including the main studio. I have the station on the air with the help of the auxiliary generator at the transmitter site. I’m tracking an old Percy Faith album. Do you want to come out here?” I jumped out of bed and into my car and headed towards the studio at 1795 Tittabawassee Road. The most eerie place in the world is a radio station with no power. No hum of equipment, no voices and totally dark. I grabbed an empty AP paper box, put the program log, commercial copy and carts into it and headed out the door. The transmitter site was out in farm country. As a drove onto Uncle Henry Road, I realized I wasn’t going to get far. Almost immediately the tires broke through a layer of ice causing the car to bottom out. So I abandoned my 1973 Nova and hiked the last mile, lugging the box. 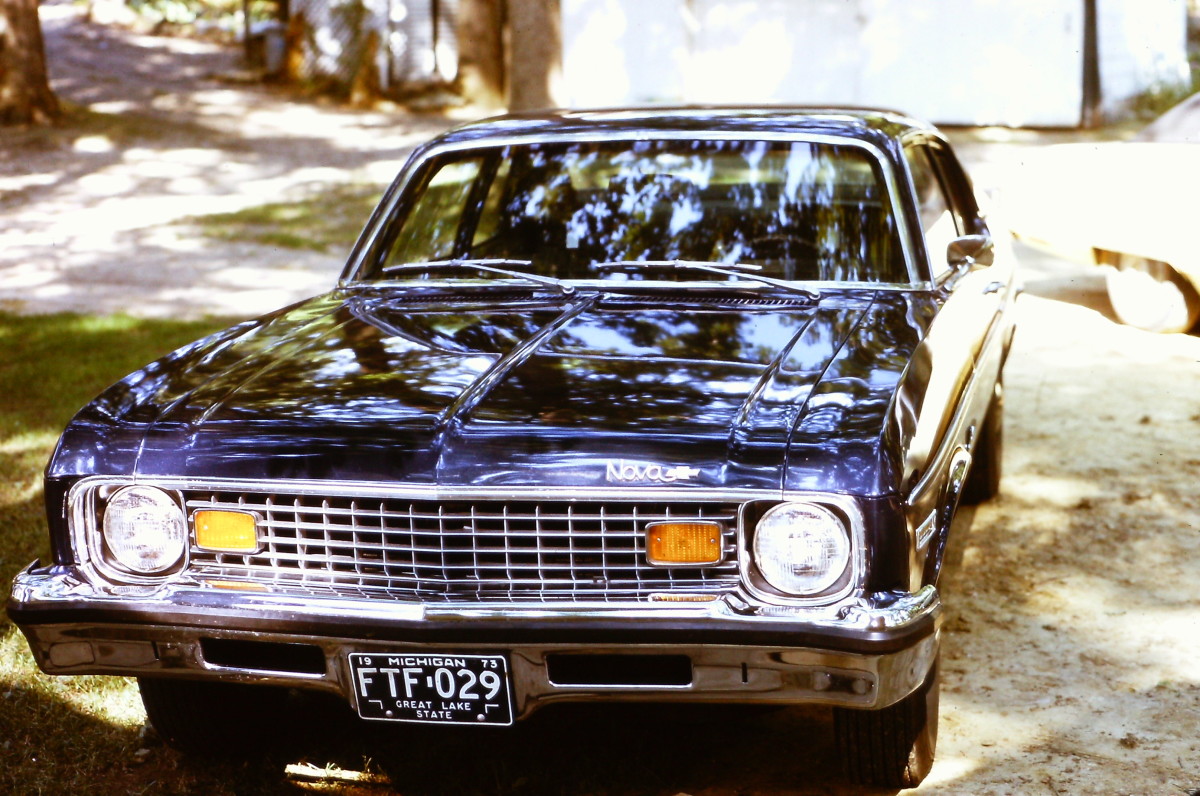 The transmitter building had a small studio equipped with castoffs—a couple of ancient 16 inch turntables, two retired cart machines–a gray/green Collins and Macarta.  I was familiar with the old RCA console. It was the same model used at WWGC, the Gettysburg College student station where I had been station manager. What the powerless main studio lacked in ambient noise, the transmitter site more than made up. The transmitter cooling fans accompanied by the roar of the auxiliary generator was far cry from an acoustically treated studio. Then there was the not-so-sweet aroma of diesel fumes permeating the place.

In a stroke of brilliance, Fred Krell had gone directly from home to the Emergency Center in the Saginaw City Hall basement. And amazingly enough, the phone circuit between him and me was intact. Fred and I started our on-air marathon. Located at the nerve center, he was the purveyor of all the community efforts dealing with the massive ice storm and power outage. I asked questions and guided the conversation. 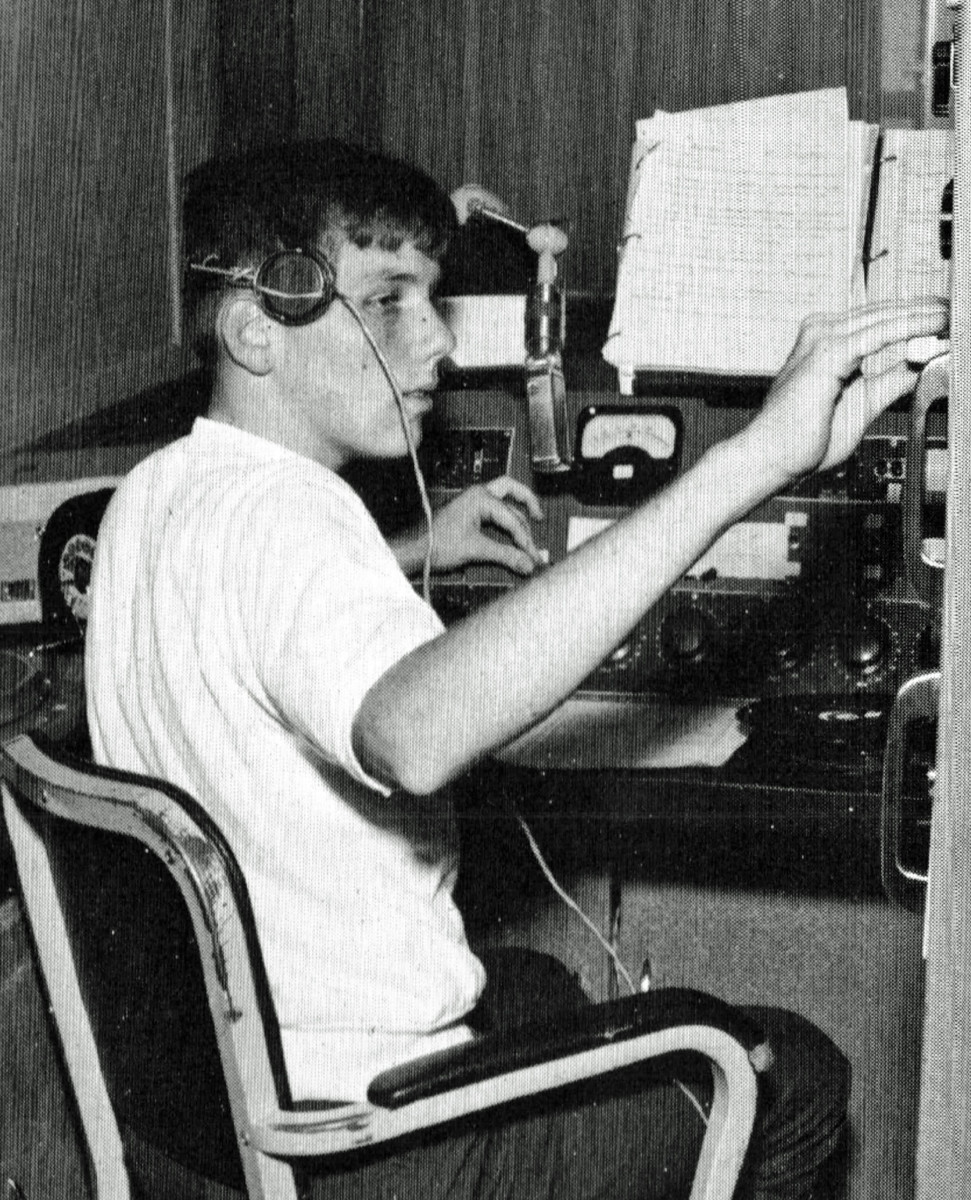 The RCA console at Gettysburg College was the same model found at the WSGW transmitter site in 1976. Photo is Rick Belcher aka “Dick Chatham up and at ’em” on 640 WWGC.

This was “continuing coverage” that relied only on the two of us. The transmitter building had no AP wire service, only a phone. The studio layout was challenging. The cart machines were out of reach and sight at the bottom of a rack. There was no remote start. So when I needed to play a commercial to regroup, Cliff graciously knelt on the floor in front of them and pressed the start button when he saw my hand signal.

Timing to CBS hard starts was trying. I had somehow forgotten that the 60-cycle electrical current generated by Consumers Power kept electric clocks on time. The generator ran at whatever number of cycles it felt like. Trying to hit CBS News at the top of hour meant joining either late or early. As someone who prided himself with flawless timing, I found that disconcerting. But in the overall scheme, that was minor.

On the way to the transmitter site, I had checked out the Saginaw County competitors on my car radio. With each preset: Nada. All of them silent. So I figured if it were possible to have an 85 share in Arbitron, this is when it would happen. Reflecting later, I realized more importantly that our coverage built our station’s brand—WSGW as the news/talk leader. I told my boss, the general manager, that I had come up with a name for what had happened—an SEE, a “significant emotional event,” emotional because it had such a strong impact on every radio listener that day.

So was there a discernible long term effect? At that time there was only one Arbitron a year—April, and the ice storm happened in early March. But as it turned out, a ratings reward was hiding around the corner—a 34 share 18+ 6a-10a!

Our staff grew and the station, with it. Very dedicated and highly capable talent joined the crew. Some are at the station to this day, and they are the major reason for WSGW’s continuing dominance. They are the team that continually connects with the concerns, needs, hopes and aspirations of the audience–and at a performance level you find only in much larger markets. I’m grateful to have worked with them and proud that I had a small part in WSGW’s history. And regarding that icy morning, one takeaway has remained with me—a bad morning may be an opportunity in disguise.