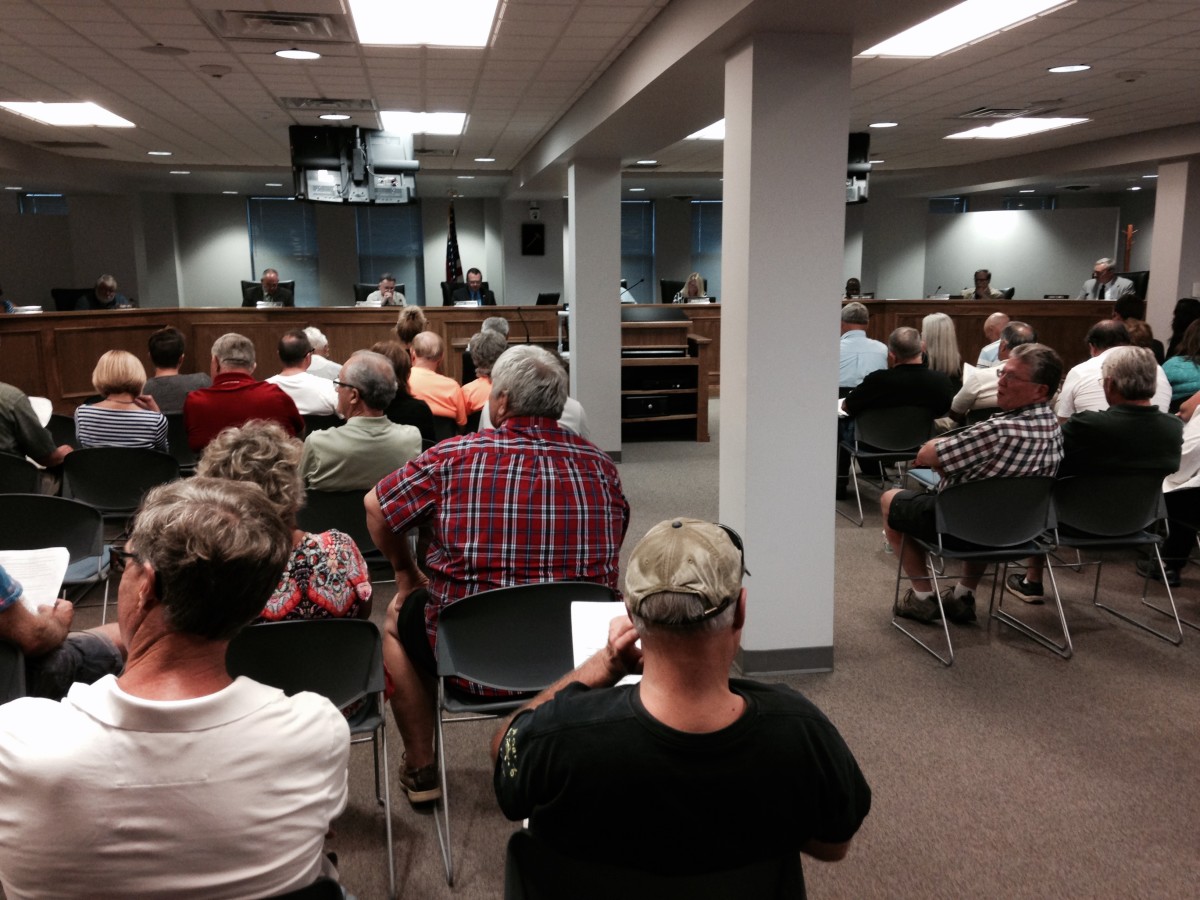 County Board of Commissioners meeting on August 18, 2015

A proposed resolution contained language that would double sewer rates for those served by a pipeline known as the Southern Regional Interceptor or SRI.  In Columbia township, the rate increase would impact two residences and several businesses–In Good Company restaurant, Loofy’s, and the businesses at Jefferson and US 127.  It would also substantially increase rates for some in Hanover and Liberty Townships.  That move failed to gain traction.  The votes of David Elwell, Phil Duckham, Sarah Lightner, Julie Alexander and Rodney Walz served to stop the new resolution.  Voting against the interests stated by Columbia, Liberty and Hanover Townships were Chairman Steve Shotwell, Daniel Mahoney, Carl Rice, Jr., and John Polaczyk.  (See tally from the County’s website below).

County Commissioners faced a standing room only crowd.  During public comment, they also heard arguments, some of them expressed with strong emotion, from those who would be affected.  Columbia Township Supervisor Bob Elrod, Treasurer John Calhoun, and Trustee Flip Reynolds presented the township’s argument against the proposed resolution.  Of those who were in the packed house, no one rose to support Leoni Township’s position.  As the result of the vote was announced, the crowd erupted into applause.

The sewer has been controversial for a long time. It reached a crisis when Leoni Township defaulted on a June 1 bond payment for the SRI. That forced the County to pick up the tab. At their July meeting, commissioners voted 5-4 to hold Leoni Township responsible for the default. Leoni Township believes that there is language in the contract that compels Columbia, Liberty, and Hanover Townships to pay the bond, and not Leoni Township. And once the entire bond issue is paid off, Leoni retains sole ownership of the SRI. The resolution before the commission tonight (Tuesday, August 18), called called for a different payment structure with the four townships-Columbia, Hanover, Liberty and Leoni, all paying various amounts.

During public comment several themes emerged.  One attorney suggested that the new resolution was the result of “Tammany Hall politics.” Another speaker said it must have been worked out in “smoke filled rooms.”  Others pointed out that this increase in rates would be an enormous burden to current businesses and residences and discourage any new building where sewers would connect to the SRI.  Columbia Township trustee Flip Reynolds called it “a black eye for Jackson County.”  Supervisor Bob Elrod said it was “bordering on illegal.”   Treasurer John Calhoun went through several several sections of the resolution, arguing against them.  An attorney repeatedly said the resolution was “dishonest” and “legal fiction.”

Tonight’s rejection of the new resolution is not likely to end the controversy.  Although this is seen as a victory for Columbia, Hanover, and Liberty Townships, more litigation could be ahead.

The official tally from the County’s website (a “nay” vote stopped the new resolution):

To reconsider the vote on the motion (Township of Leoni shall be responsible for the 1% interest penalty, and in addition pay $327,812.50 for the bond payment that was due on 6-1-2015 and future payments)
Motion by James Shotwell, second by Carl Rice.
Final Resolution: Motion Fails
Yea: Carl Rice, James Shotwell, Daniel Mahoney, John Polaczyk
Nay: Sarah Lightner, Rodney Walz, Philip Duckham, Julie Alexander, David Elwell