Raft-a-thon III Out to Break the Record

At precisely 2:04 pm today, three friends left a dock on the Eagle Point shoreline.  Their goal?  To break the record for consecutive hours on Clark Lake waters.  Noah Zak, Andrew Duckett, and Crew Clement recently graduated from Toledo’s Central Catholic High School.  They boarded a raft owned by Noah’s mother, Beckey Ligibel, with the goal of staying on the lake for 69 hours.  To get the flavor of what’s ahead, check out their departure video this afternoon.

As you can see by the Raft-a-thon III name, this a first at Clark Lake. Sometime in the 1990s, another group of Clark Lakers laid down the marker.  Tucker Boyers, Bill Tuttle, Denny Negus, and Kim Degenais held out for 54 straight hours.  They had two rules according to Tucker Boyers, and these have been confirmed by Bill Tuttle. “You could only leave the raft for a #2 bathroom break and for last call at the Beach Bar.”

Both Bill and Tucker remember the night they feared missing last call. Strapped to the raft was Tucker’s bass boat that held most of the supplies.  It was fastened so the stern was heading forward.  As they sped to the Beach Bar, water flowed over the boat’s transom and swamped it.  And the supplies floated away over the lake.  But it wasn’t a catastrophe.  According to Bill Tuttle, they had a great supply chain.  Breakfast, lunch and dinner were shipped to the crew and they ate well.  They also didn’t worry too much about sleep.  In the middle of the night, they thought they might be too loud.  So to disguise identities, they called each other by a number and not by name.  Bill Tuttle was #1, Kim #2, Tucker #3, and Denny #4. 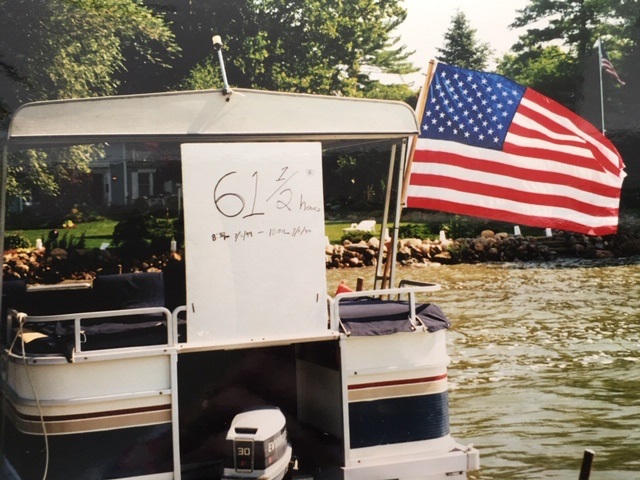 Raft-a-thon II featured Ryan Ambs and his group.  They hit the 61 1/2 hour mark.  Upon hearing about Noah, Andrew, and Crew, Ryan’s reaction was “Oh, that’s awesome.”  Ryan passes along some advice to Noah, Andrew, and Crew:  “An extra battery could help.  A citronella candle can double as an anchor light in a pinch.  If friends bring supplies, order twice as much as you think you need.  Don’t forget water and Gatorade.  Fireworks provide good entertainment.  Make a lot of noise at night to let everyone know you’re still on the water.  Finally, it’s an honor code, no shortcuts.” 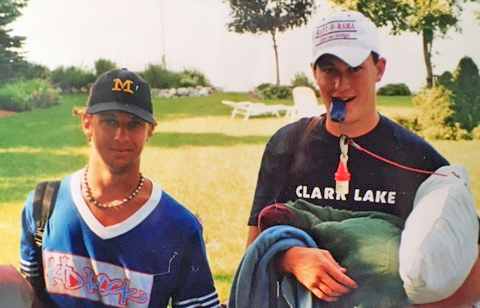 Ryan’s Raft-a-thon took place over a holiday weekend.  They launched at 8:30 pm on July 1, 1999 and came back to shore on July 4th.  On board with Ryan were Matt Mitchell, Mike Ambs, and Pete Lammers.  Because of work, Mike and Pete had to depart early.  But Ryan explains they had friends who “would come out to visit (we would pick them up at the dock), then they would go home, and come back out the next day.”  Then there was the connection with Raft-a-thon I and Raft-a-thon II.  Around 5 am July 2nd, “Tucker was circling our raft, in his fishing boat, taunting us and waking us up.  The night of 7/1 was calm and probably the only night of good sleep. Tucker wanted to make sure we weren’t too comfortable.”  Noah, Andrew, and Crew, beware!