The County Parks Department visited Clark Lake on Friday as they prepare to install the new $40,000 playground equipment.  The funding for this project is derived from a property tax increase.

Kyle Lewis, parks director, and Jack McCloughhan, superintendent, inspected the area and reviewed their plans.  The old swing set, slide and monkey bars will be removed.  The new equipment requires a footprint of 3,564 square feet. To accommodate it, trees in that area of the park will be taken down.  Eight cottonwood trees were targeted for removal.

Cotton wood trees are common in the County Park.   A gardening website suggests why they thrive here. “Cottonwoods provide excellent shade in lakeside parks or marshy areas.”  But the same website also comments that cottonwoods are messy and “have weak wood and are prone to disease.”  Among the eight trees in the park are some that have dead limbs, and one or more do not provide a lot of shade.  The targeted trees were marked with an “X”. 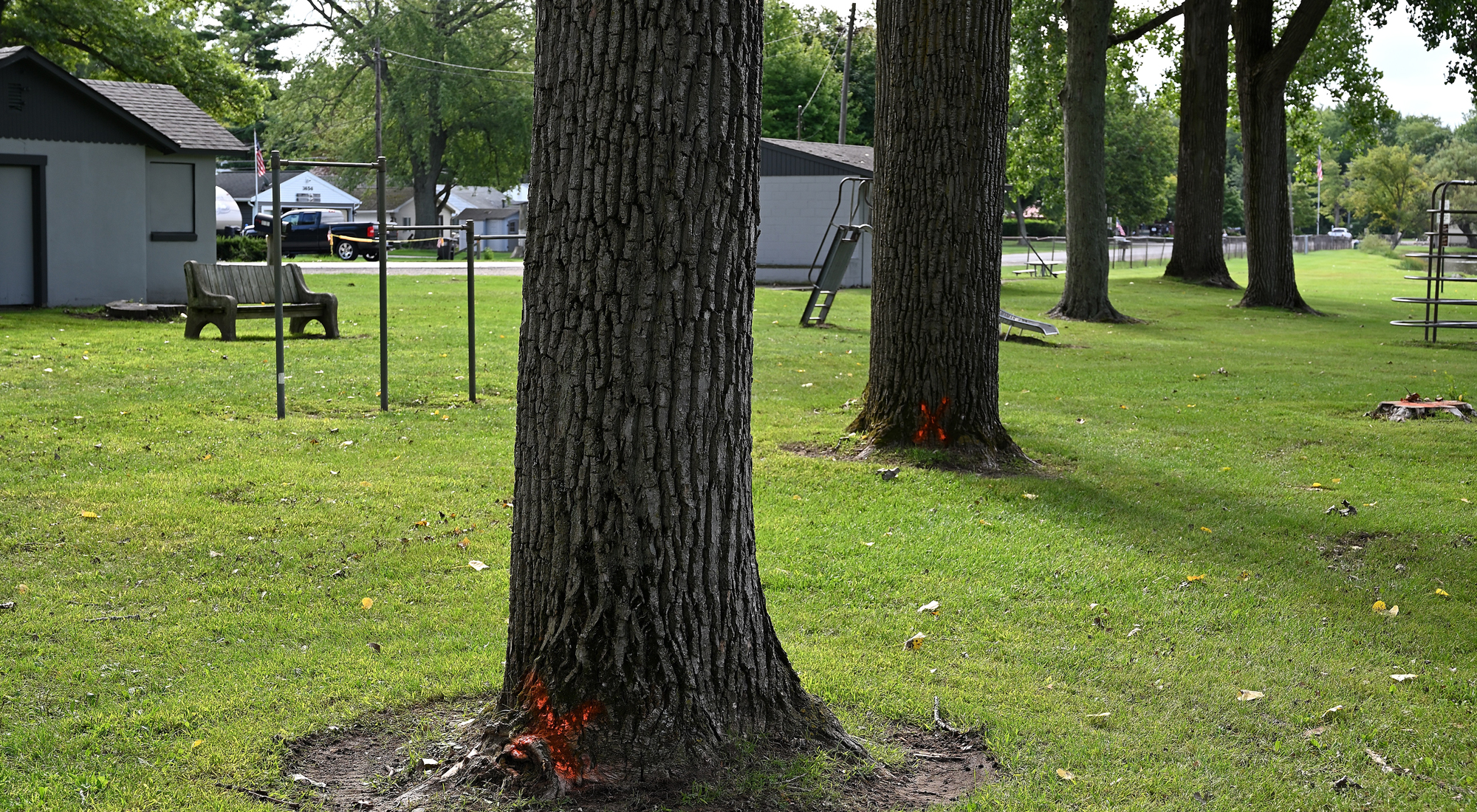 Clark Lake residents have named security as a top issue for the County Park.   The likely impetus recently occurred at Clark Lake.  When the Township improved the Park at the west end, it drew more people and abuses occurred.  The Township reacted by installing security cameras that Township police actively monitored.  When police spotted wrong-doing, they quickly came to the park and addressed the problem.  Not until then did the situation improve.  With improvements ahead for the County Park, residents wonder if there will be a repeat performance.

Last year, the Parks Department department sponsored a meeting to elicit comments from residents.  Fencing at the park emerged as the top priority.  Underlying that priority were security concerns.   On Friday, Kyle Lewis indicated that fencing along Ocean Beach Road, starting at the two old buildings and going south to the boat launch, would be removed.  In its place, the Parks Department will install boulders along the same area.

Members of the Clark Lake Parks Commission, who support the interests of Clark Lake residents, asked about the dilapidated fence along Ocean Beach Road that starts at the Spirit Trail and goes north to North Lake, and forms a perimeter around the Community Center.  Kyle Lewis did not offer a commitment for repair or replacement.

Another security issue is the lack of cameras in the park.  The parks director did not rule them out.  He did questioned if incidents occur in the park. He also suggested that more people coming into the park to use the new equipment would diminish problems.  The Clark Lake Parks Commission noted that it didn’t work that way at the Township Park.  Columbia Township’s acting police chief, Jay Niles, says incidents in the County Park “are similar to the Township Park.  That includes tickets for alcohol, investigations, and service calls.”  Sergeant Niles adds, “because the Township Park is more attractive, there is more activity there.”  To watch an incident caught on video in the County Park, please click here.

As noted in a previous article on this website, much of the maintenance and improvements in the County Park are the direct result of Clark Lake residents volunteering their time, effort and money.  The Community Center has for years borne much of the upkeep.  That includes mowing and other lawn care for the entire area from North Lake Road south to where the Trail begins.  At one time the Community Center was responsible for maintaining the two buildings (now unused) by Ocean Beach Road, including supplying toilet paper for the restrooms.  The Spirit Trail Committee maintains the portion of the path that runs through the Park.  The Garden Angels add their magic touch to the Tom Collins memorial, the area around the house, and the Triangle.  The Clark Lake Spirit Foundation recently paid for an automatic irrigation system for the Triangle.  The County provides a dumpster, a port-a-potty, and mows the area near the lake.  Last year, the County cleaned up some of the shoreline.  If the Park looks good, thank fellow residents. 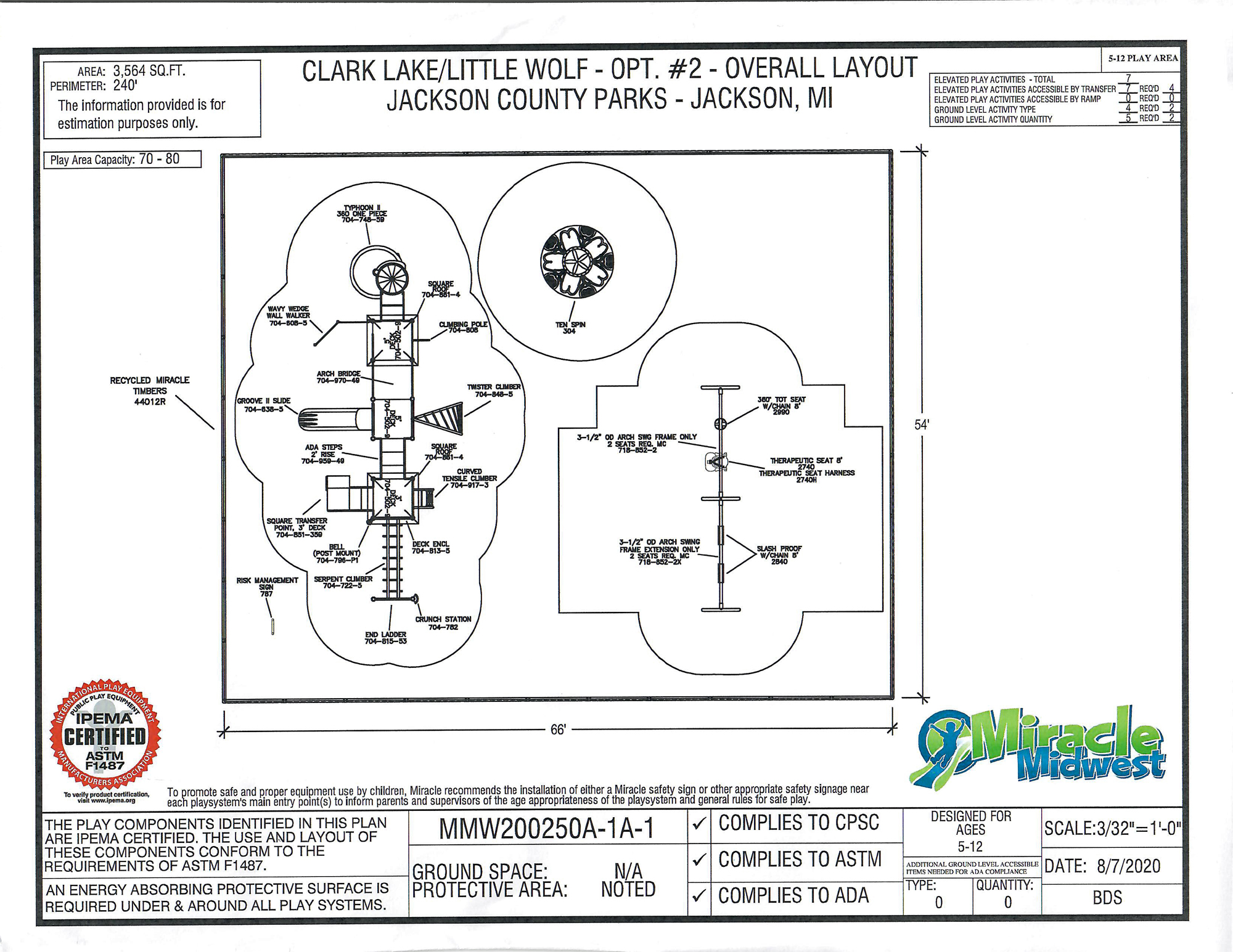