The Neighborhoods of Clark Lake 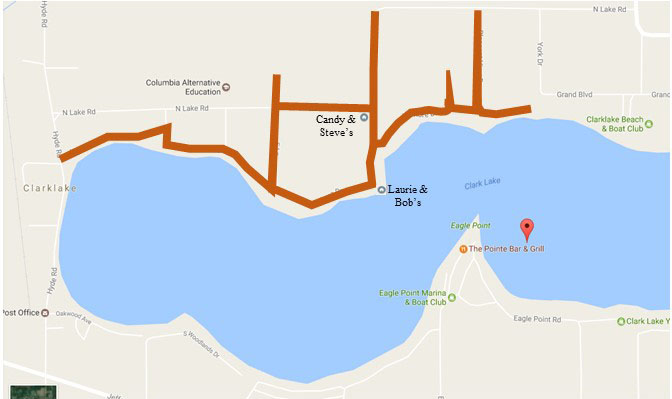 What unites the people of Clark Lake is each individual’s love of this awesome place, sometimes referred to as “our own paradise.”  In this setting, friendships develop–lifelong, and sometimes involve several generations.  One’s connection to Clark Lake is not a fleeting thing. 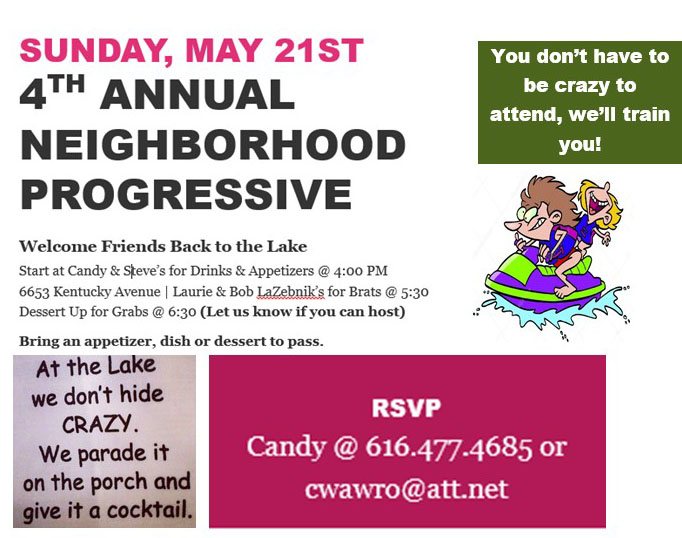 Friendships tend to develop around neighborhoods.  As a kid growing up at the lake, your sphere of friends went as far as your were allowed to travel by boat.  When you became old enough to venture beyond parental perimeters, then your Clark Lake world of friendships grew.  Even so, the lake still has its distinct neighborhoods. Today marked a neighborhood event that has blossomed over the last four years.  The Annual Neighborhood Progressive Dinner is the brainchild of Candy and Steve Wawro.  It includes neighbors who live on the north shore starting south of Pleasant View and extending west to Hyde Road.  Today’s dinner started at the Wawro’s and then “progressed” to the home of Bob and Laurie LaZebnik who live in the house on Kentucky Point.  The photos below were taken in their home.

Another example of neighbors gathering on a planned basis is the Eagle Point crew.  Sitting at the reserved table at the Pointe, it’s easy to see why this group gets together each Friday night (Thursdays after Memorial Day).  Participants mostly live along Eagle Point, west end, and the Eagle Point cove.  Some are related to each other or became that way through marriages.  Others have known each other as far back as they can remember.  In many cases, their parents and grandparents were also friends.  Below are some recent photos of this group at the Pointe.

And to look back at the 3rd Annual South Woodlands Party,  click here.