An Encounter to Avoid

On Sunday, a couple, new to Clark Lake, was walking the Spirit Trail.  What the two spotted on Lakeview West just around the bend from Eagle Point was a surprise.  According to them, this snake had emerged from the swamp and was headed across the road. 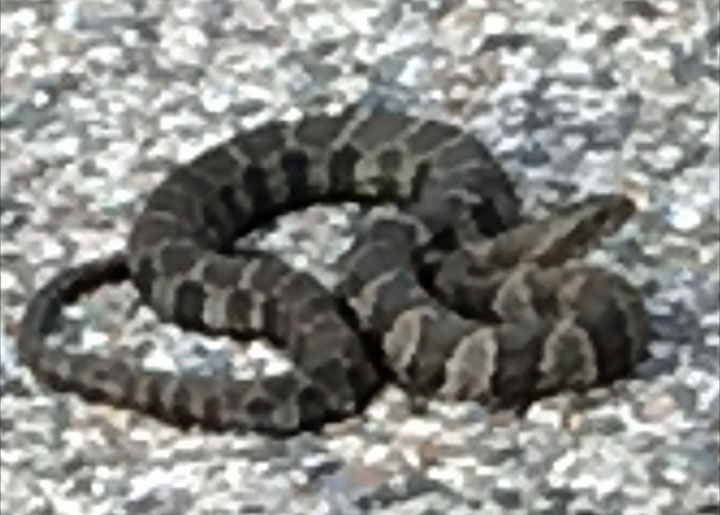 To some who have viewed the photo, this looks like massasauga rattlesnake, although the rattle is not visible here.  According to the Michigan DNR, these venomous snakes are “a rare sight for most Michigan residents.”  The DNR says they habitat in wetlands, but sometimes move to dryer areas seeking mice and voles.

What are the dangers?   The DNR indicates they avoid humans, but add “like any animal though, these snakes will protect themselves from anything they see as a potential predator. Their short fangs can easily puncture skin and they do possess a potent venom. It is best to treat them with respect and leave them alone. The few bites that occur to humans often result from attempts to handle or kill the snakes.”

A long time Clark Lake resident comments she and others have seen other rattlers before at Clark Lake, so using caution is a good idea.  But reflecting the DNR view, these snakes revealing themselves is not a frequent occurrence.

Read more about Michigan’s only venomous snake by clicking here.