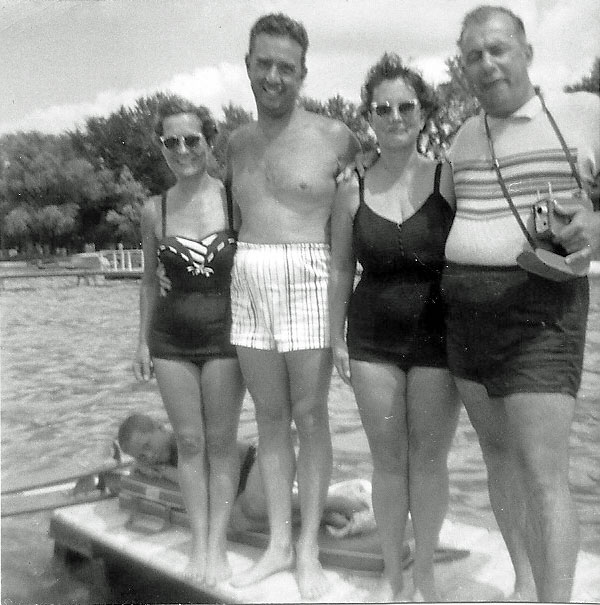 It is finally warm enough for the first venture out into Clark Lake on Memorial Day weekend 2015. That is significant for me because it marks the 65th consecutive year that I have experienced the refreshing waters of this spring feed lake. You see, my parents brought me into this world on Memorial Day of 1950. World War II was a not so distant memory and I was now a part of what would be called the Baby Boomers. My father dipped me into Clark Lake when I was less than a month old and I have been swimming in Clark Lake every summer since. It was the beginning of a family tradition that still lives on.

My Clark Lake story began in a yellow cottage just behind Elsie’s restaurant (on the West side of Ocean Beach where Riverside dead ends). My parents had rented it for three years previously but for me the summer of 1950 was my first time in Michigan – I was only a few weeks old. In 1952, my parents, Max and Bee June from Bowling Green, Ohio, purchased some property from Leo Steinem, father of Gloria, on what was to be called Elwyn Court off Ocean Beach Rd. Along with the Moyers, a family from Toledo who we had met when renting on Russell Court, our matching cottages were constructed. There was excitement in the air that summer of 1953 when we came to Clark Lake to our own cottage. Not long after, my grandmother built a cottage next to ours. For the next three decades, we were the only cottages up on the hill. We would BBQ together for most lunches and dinners on a homemade grill that was constructed by our dads with stacked cinder blocks and chicken wire for the grilling surface. The Junes and Moyers traveled to all of the hot spots together: “The Wimpy” hamburger joint on Francis or the Rose Room in the basement of Fields for Hot Fudge Pie or the Cascades for a night of music, light shows and getting soaked by the mist from the falls, especially when the wind was blowing. We often stopped at Cambridge Junction on our way to the lake for brunch or stopped at the Spot in Brooklyn. 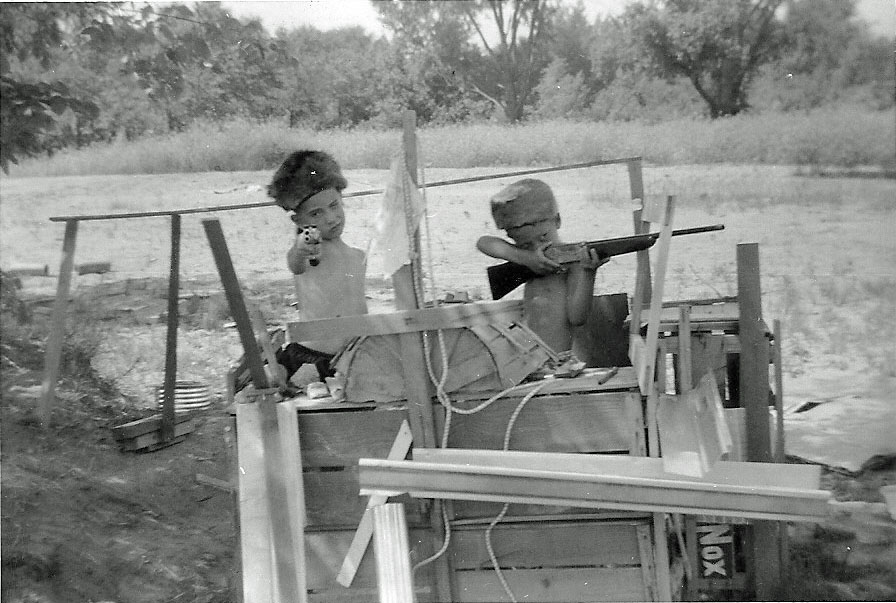 Dick Moyer and Ron June in their first Alamo complete with coonskin hats. Kings of the wild frontier!

When I was only a few months old, little did I know that the young boy I met when our families rented on Russell Court would eventually be like a brother to me. Dick Moyer, my life-long pal from Clark Lake and I would go into the Star Theater, then cross the boulevard after the show to get ice cream from the Dairy Queen. There was a barn on North Lake Road where we would rent horses to go horseback riding. Behind our cottages, Dick and I built several “Alamos” in those early years because of Fess Parker’s popularity as Davey Crockett, featured every Sunday night on the “Wonderful World of Disney.” On many warm summer evenings, Dick and I would pitch a tent and spend the night outside. Eventually, bonfires between the cottages became a night time ritual. We would tell stories, sometimes factual but usually just legendary stories told around all bonfires. Once the fire got so intense, we needed to get the hose out to keep the vinyl siding from melting. My theory was if the people did not move away from the fire, it wasn’t intense enough. We held our fires on an old stump and even burned down deep enough in the ground that Moyers water line was melted and ceased to work – but that’s another story! 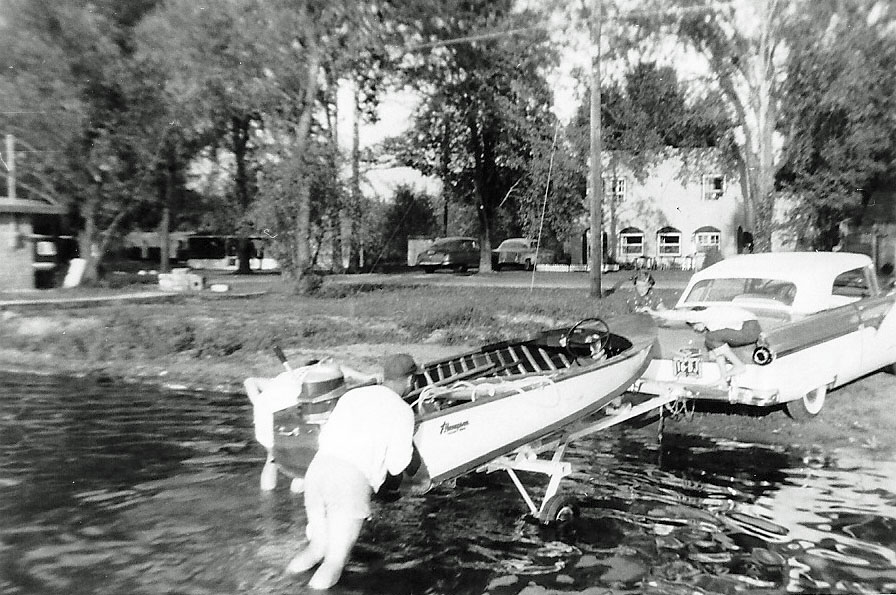 Ron’s dad, Max, gives the boat a push as it comes out of the water along Ocean Beach 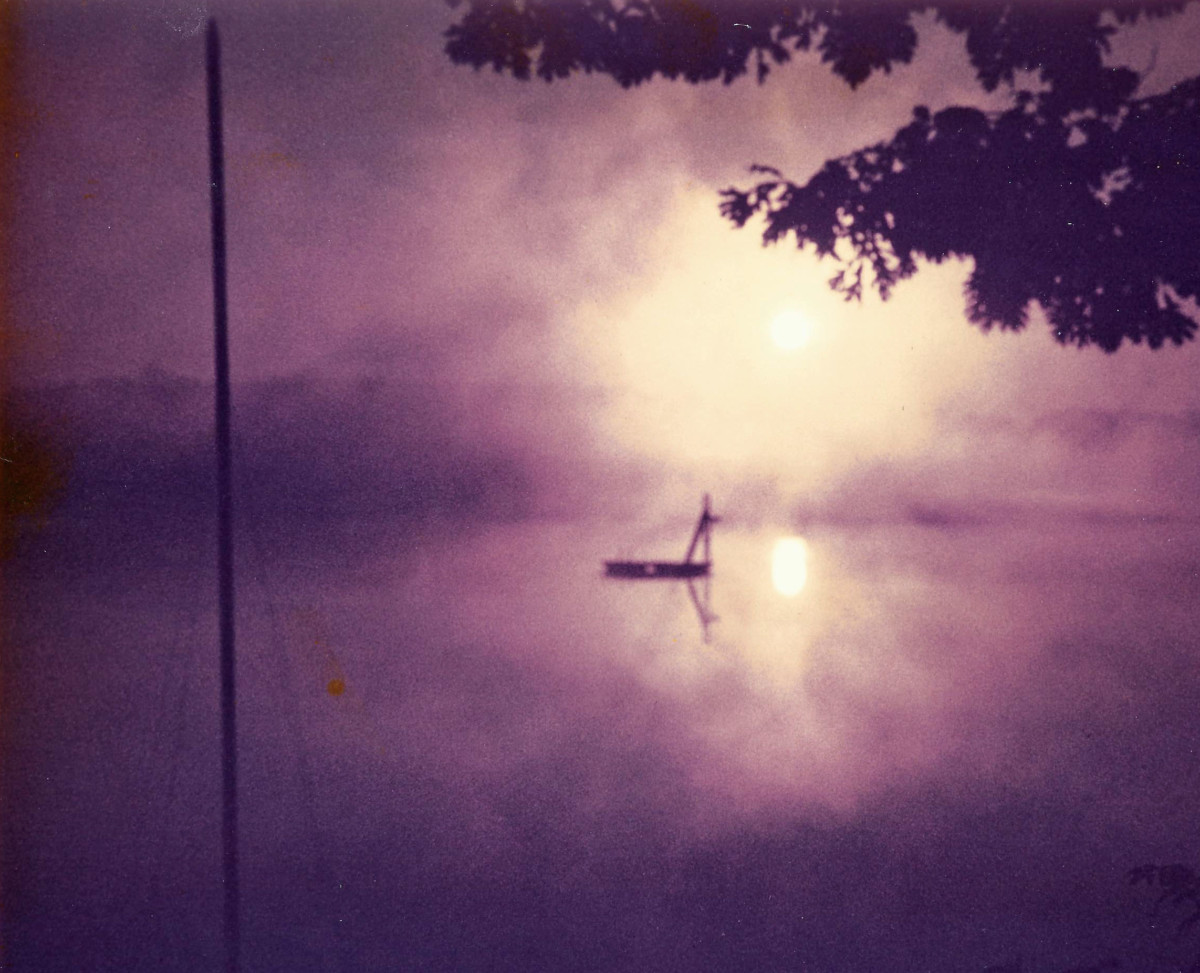 To my delight, one summer I was considered old enough and responsible enough to take the boat out on my own, even though I did not take a boater safety course. Our beautiful wooden boat had a huge, new, 25 horse Johnson outboard motor. Dick and I taught ourselves to ski and we made a home-made “boogie board” before we knew what they were. I guess we were ahead of our time. We would boat across to the “yellow raft” that had the high dive off of it or sometimes we would venture to Lakeside grocery on Hyde Road, tie the boat to the dock and get an ice cream sandwich or orange push up. Beside the grocery store was a Citi Service gas station. Getting gas was a problem because we had to unfasten the gas tank and lift it out of the boat, put it in a red wagon that the gas station provided, wheel it up the dock and across Hyde Road. There the attendant would fill it. I often paid with a very soggy dollar bill. Getting it back in the boat was obviously much harder because the gas tank was now full and really heavy. Maybe that is why dad decided I could take the boat whenever it was low on gas!

Eventually I fell in love with a beautiful girl named Beth, also from BG. The first time she traveled with me to what I called “My Little Piece of Heaven at Clark Lake” she immediately fell in love with the cool, clear water. She has now been in Clark Lake over 50 consecutive years and Clark Lake is as special to her as it is to me. Our two children, Brian and Sarah have been in Clark Lake every summer of their lives as have our grandchildren. All of them have had the “traditional Clark Lake first swim” just like I did in 1950. Just last week, my nephew Doug Doren who also spent his summers at Clark Lake, brought his new baby, three week old Emily, to the lake. He asked Uncle Ron to give her a “Clark Lake Baptism.” 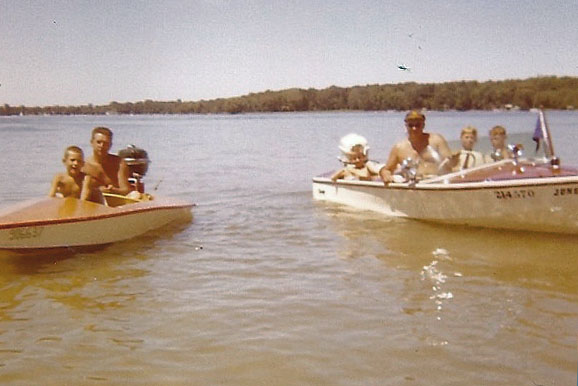 Beth and I decided long ago that we would eventually live at Clark Lake permanently and since 2000, our homestead has been here. Our dream has come true.

The memories will never end and continue to grow year by year. One such memory is from my grandson when he was 3. After a long drive to the lake from Indianapolis, he, with his mom, dad and sister, arrived around midnight. As I took him from the car and lifted him into my arms, his sleepy eyes barely awakening from his slumber he said, “Grampa, take me out on the dock so I can see my best friend, Clark Lake”. As we sat on the edge of the dock with the moon glistening over the still water, he fell asleep in my arms.

Much to our delight, our daughter Sarah always wanted to be married on the shores of Clark Lake. When that time came, our home was in the Edgewater Condominiums on Eagle Point where the hotel used to sit. For any of you who traveled by on your boats on August 10, 2013, wedding vows were exchanged by Sarah and John Schuler under the white tent.

By the way, my childhood friend and ‘brother’, Dick, lives right across the lake with his lovely bride Lois. I can see his dock from my dock. Dick and I have shared boat rides, swimming, bonfires and cool breezes with our parents, sisters, wives, children, and grandchildren and countless other friends and relatives. Clark Lake really is a special place. 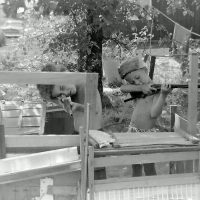 More at the Alamo 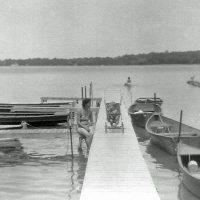 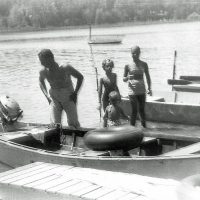 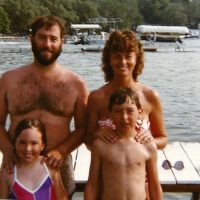 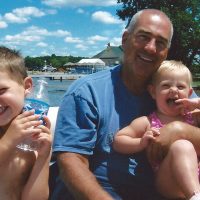 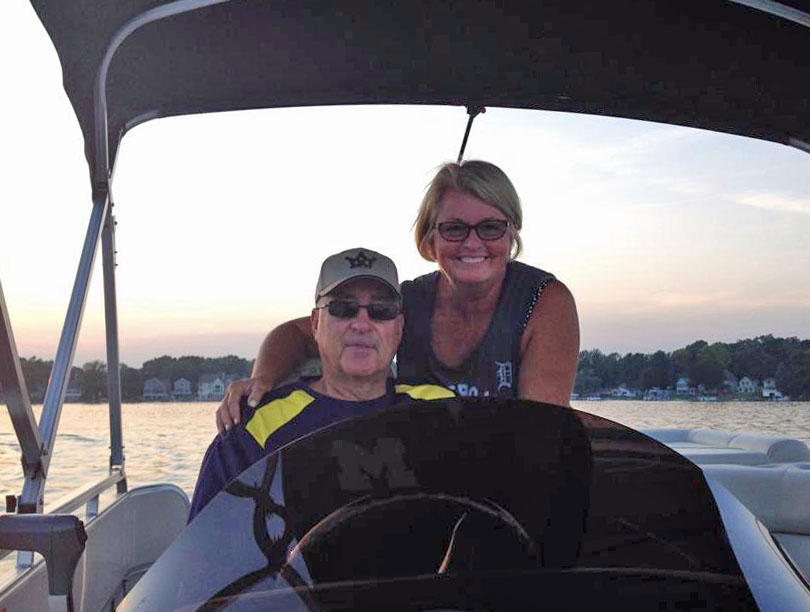