Anyone who has spent summers at Clark Lake while growing up knows what that means.  You have fun, make friends and create a lifetime of memories.  One summer in the early 1960s, Charlie Timberlake and I became buddies.  His family had a nearby cottage, a few closer to Eagle Point.  I soon learned that the Timberlakes were special.  Charlie’s dad, Claire Timberlake, was in the US Ambassadorial service and had been the first ambassador the Belgian Congo.  When you walked into their house, it was like the United Nations.  They spoke to each other in Spanish or German or who-knows-what and, thankfully, sometimes English.  The Timberlakes had a beautiful speed boat with an Evinrude 75-horsepower.  Charlie also had access to a VW Beetle, and that leads me to my story. 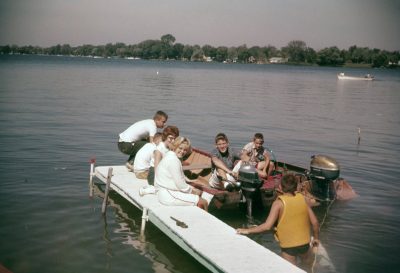 Mike Ligibel, about the time of the infamous VW ride. Also on dock, Jane Dianich (red hair) and Amy Belcher Bless. Rick Belcher is in the boat with the Mercury outboard.  Possibly (?) Buzz Belcher is preparing to ski.

One day Charlie, Fred Cagney (another neighbor) and I set out to circle the lake in the VW and in a way that challenged speed limits, if they existed.  Our hair was flying and everything was fine until we came to the hairpin curve on North Lake.  It seems that the VW did not have the low center of gravity of a sports car, even if it was manufactured in Germany.  Over we went into the ditch.  We pushed open the door and climbed out, sort of like emerging from a submarine hatch. After getting the car back on its wheels we were surprised to find that it ran fine so we just drove away.  It was then that we saw the black and red licorice sticks that we had just purchased at Roberts, hanging from the rear view mirror and various other amazing places.  We were a bit dazed, the car scraped up, but thankfully the outcome was not the same as in a song that was popular at the time—“Deadman’s Curve” by Jan and Dean.

All of us were glad that the bad consequences were at a minimum, but there was an opportunity for learning something about highway safety.  There was perhaps an irony in all of this.  My education in engineering headed me to my lifetime career in transportation.  At my retirement I was Planning Administrator for Ohio Department of Transportation, Northwest District.  And of course my love of Clark Lake and all the memories I have of friends and family are priceless.