An early picture of Dr. Mary Bentley and Dr. Jack Bentley at Clark Lake. Sailing, as well as other pursuits like it, have always interested the Bentley’s.

My earliest memories of Clark Lake were circa summer 1928 when I was two years old.  My mother took me to the main pier at Eagle Point every afternoon.  There was a 25-foot slide, a twirling fun merry-go-round, bowling alley and dance hall with live bands every weekend in the summer. They later made the dance hall into a skating rink with music to skate by on Friday nights.  There was also a small grocery store with a dairy bar for ice cream cones.  Rollo and Virginia Every, who owned this facility that included Eagle Point Hotel, lived in Florida winters and spent each summer here.  We had so much fun, it seemed like the summer was over much too quickly.

Our family, along with my older brother, John Nichols, lived at 1446 Eagle Point.  We had a small dock, a motor boat and row boat.  I frequently went out at first light in the morning to go fishing.  There were many fish, even sunfish nesting under our dock.  Also present were many snapping turtles that seemed quite aggressive. Opening day for fishing was June; and it was policed—to be sure, everyone bought a license.

My father built a homemade sailboat called a Lark, and it was the passion of my life during my teen years.  Only one power boat existed and belonged to Doc McKee, and he was the first one to introduce water skiing.

Mr. C. B. Hayes had a picnic each summer for his employees.  They had entertainment and an ox roast for his Hayes Wheel employees, but we all attended too.  July 4th and Labor Day were the two big holidays or the summer with fireworks displays at the Consumers Clubhouse across the lake.  It seemed time to go to Jackson and go to school came all too quickly. 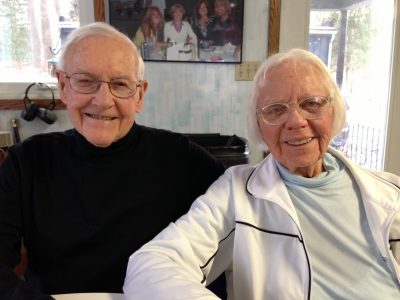 There were birds of all kinds who nested in the woods behind our cottage.  Everything then was almost untouched—the woods, wild flowers and small animals.

Note: Mary Bentley and her husband, Jack, are retired physicians who had large practices in Jackson, but who could always be turned to for emergencies here at the lake.  Dr. Mary’s father was Haskell Nichols who had been the senior state senator for 32 years.  When driving north of Jackson on 127 you will notice a sign indicating that this highway is named after the senator.