What was it like to grow up at Clark Lake?  First let me tell you that I was born in Grand Rapids, Michigan, in January of 1933 and was named after my dad, Lorenz (a World War I veteran), but we both went by the name of Larry.  My memories date back to when my dad along with mother’s help prior to World War II managed the Irish Hills Hotel which included the motel, campgrounds, original tower, arcade, playhouse, golf course and gas station.  It was across the highway from the Horns Restaurant.  I first learned to swim at Wampler’s Lake Park.  I used to go sledding behind the Brighten’s house on their hill we called “the butter bowl” at our Irish Hills golf course. It was a great time for me. 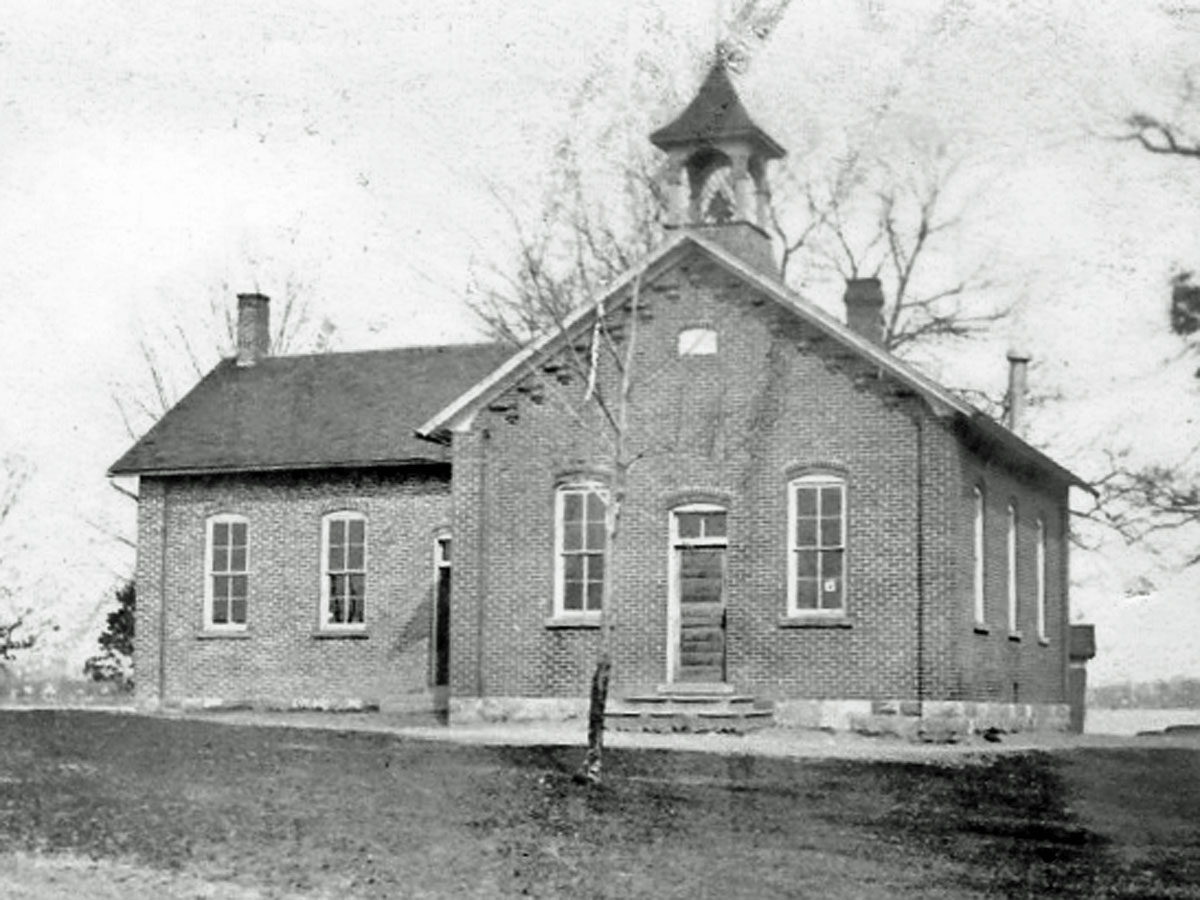 Original Clark Lake School House, about 1900, located in what is now the Columbia Towhship Park on Hyde Road.

When World War II broke out, my dad left the hotel business for defense work in Jackson.  I left the Brooklyn school system in the fifth grade for the little red brick two-room school house located at the west end of Clark Lake.  I remember hanging a May basket on the door knob of my favorite girl’s house.  We kids were let out of school to pick milk weed pods and collect scrap metal for the war effort.  We saved all our tin foil film wrappers and tin cans too.  Dave Gregory’s family bought whole milk from the Jim Preston farm and churned their own butter using a wood tub churn with a hand crank.  Clark Lake was wonderful for a young kid like me.  My family took our red ration tokens to the Brooklyn A&P grocery store in order to purchase butter and fresh meat.  I remember VJ Day and celebrating by shooting our shotgun out over the lake.  I can still remember when George Bunker, Ed Roosa and Shin Blossom were released from the Navy and returned home. 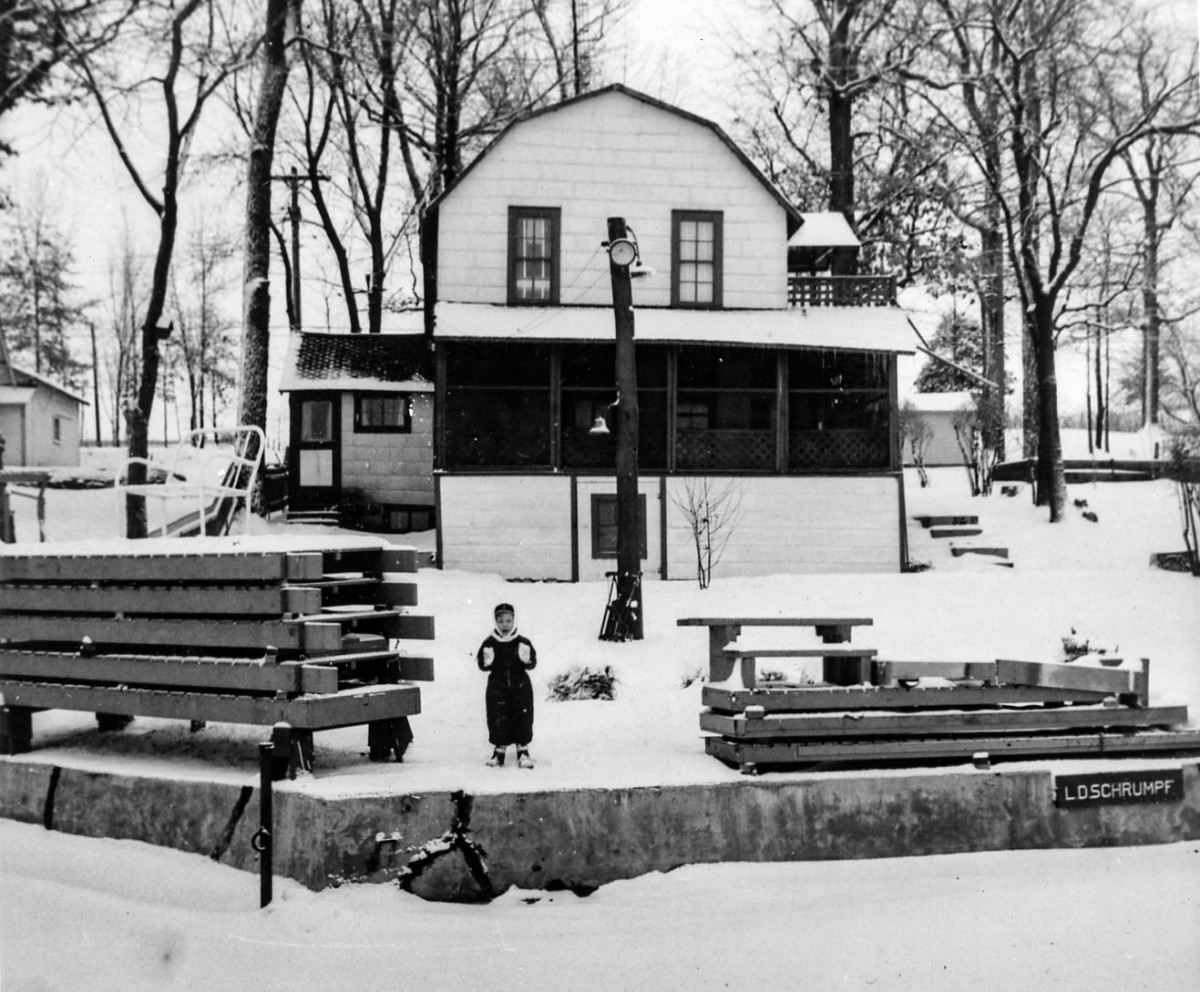 440 Oakwood in 1941. A young Larry Schrumpf is standing in the foreground

Our first lake home was a rented summer cottage on Oakwood owned by the Willnow family.  It was an exposed frame cottage without a furnace or an indoor toilet, but it did have a potbelly stove and a one-hole outhouse.  The following spring our family rented a modern house on North Lake Road.  After that, my parents bought a summer cottage at 440 Oakwood that was also without a furnace or indoor plumbing.  My dad reworked it to make it livable in the winter.  It had a spring fed lake shore well which also fed a “summer cooler.”  It was next door to Bob and Ada Hamilton’s summer cottage.

Clark Lake in the 40s was a busy place for our family with our Victory Garden and my little 4-H garden.  Orie Thompson would bring his team of Belgium horses around the west end of the lake to plow the garden.  Orie lived alone in a little house that George Bunker built for him on Thompson Road.  Back then, I would walk to the post office on Vining Street with a dime to buy war savings stamps.  To get there, I walked the lake shore and would pass the remains of the old abandoned lake steamer named Sea Scout.  On Sundays, I walked along Hyde Road to attend the Clark Lake Baptist Church with its wonderful stained glass windows and steeple with a brass bell.  I still remember the upright piano played by Wilma DeLameter.  The church had an outhouse, basement kitchen and hand-fed coal stove.  G. Ray Reed once gave me a gift of my first Christian storybook.  Later, Sylvia Reed was our Sunday school superintendent, and she was also my mentor. 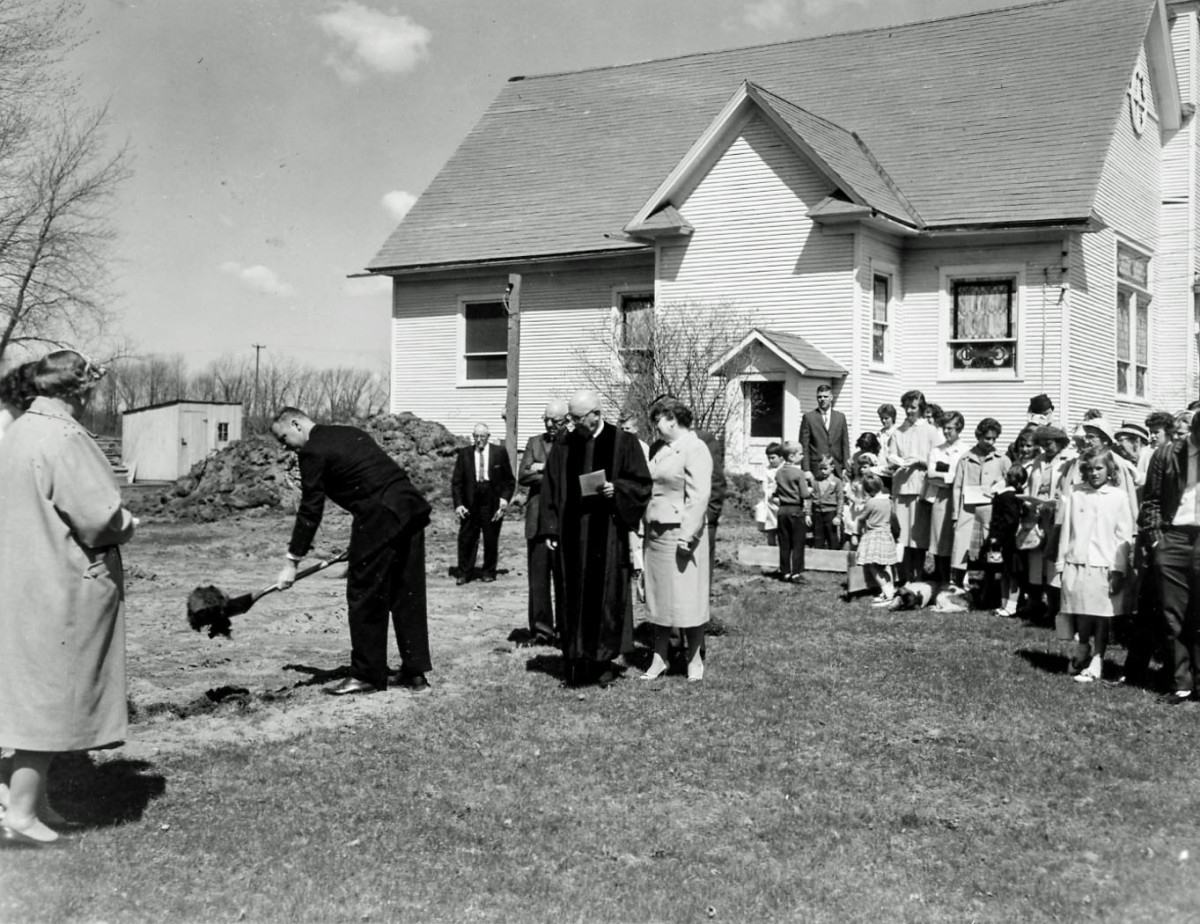 The Roberts Grocery store held a special place in my life.  It’s where I met the Napoleon school bus, and it is where I picked up my newspapers for my four-mile long paper route.

Before school each morning, I would empty Mrs. Winfield Robert’s ash buckets and bring in scuttles of coal.  Later, her son, Monford (Mose) let me redeem empty pop bottles, that I picked up along the road, for spending money.  Eldred (Bud) Kennedy sold me his father’s Schwinn bike, that his father rode for exercise on South Woodland, to use to deliver my papers.

Eagle Point was special too.  On the summer weekends, I walked to Rollo Every’s pavilion roller skating rink.  As I was his skate boy, I skated for free.  For a while my brother, Marvin, washed dishes at their hotel for Virginia Every.  I used to fly my gas powered model airplanes on the Eagle Point diamond next to Pete Fish’s house.

Staying up late on the first day of bass season, I would go fishing with my dad in his Old Town Maine canoe.  On July 4th, we shot off fireworks from our dock.  I liked going to Earl Preston’s riding stable on North Lake Road.  I gathered black walnuts and butter nuts along White Road, and shagbark hickory nuts on South Meridian Road.  I picked mushrooms on what we called the “hogs back” or picked huckleberries on Cook Road.  I picked wild asparagus or elderberries along North Lake Road plus wild strawberries along the railroad tracks.  For fun, I hunted those pesky red squirrels on South Woodlands and occasionally shooting at rats the township dump on Wesch Road.

In the winter, I trapped muskrats and mink behind Irma Cowgill’s house on the Grand River.  I especially liked ice fishing for pan fish, tip-ups for northern pike or spearing in our fishing shanty on Clark Lake.  I went ice fishing with my dad and old timers, Dave Galloway and Floyd Willnow.  Janet Rhodes, my classmate, taught me how to ice skate.  Eldred Kennedy used to take me on his hand-made wooden iceboat.  My dad would take our car on the lake for ice fishing when the ice was thick enough, and where he then taught me, then age 15, how to drive. 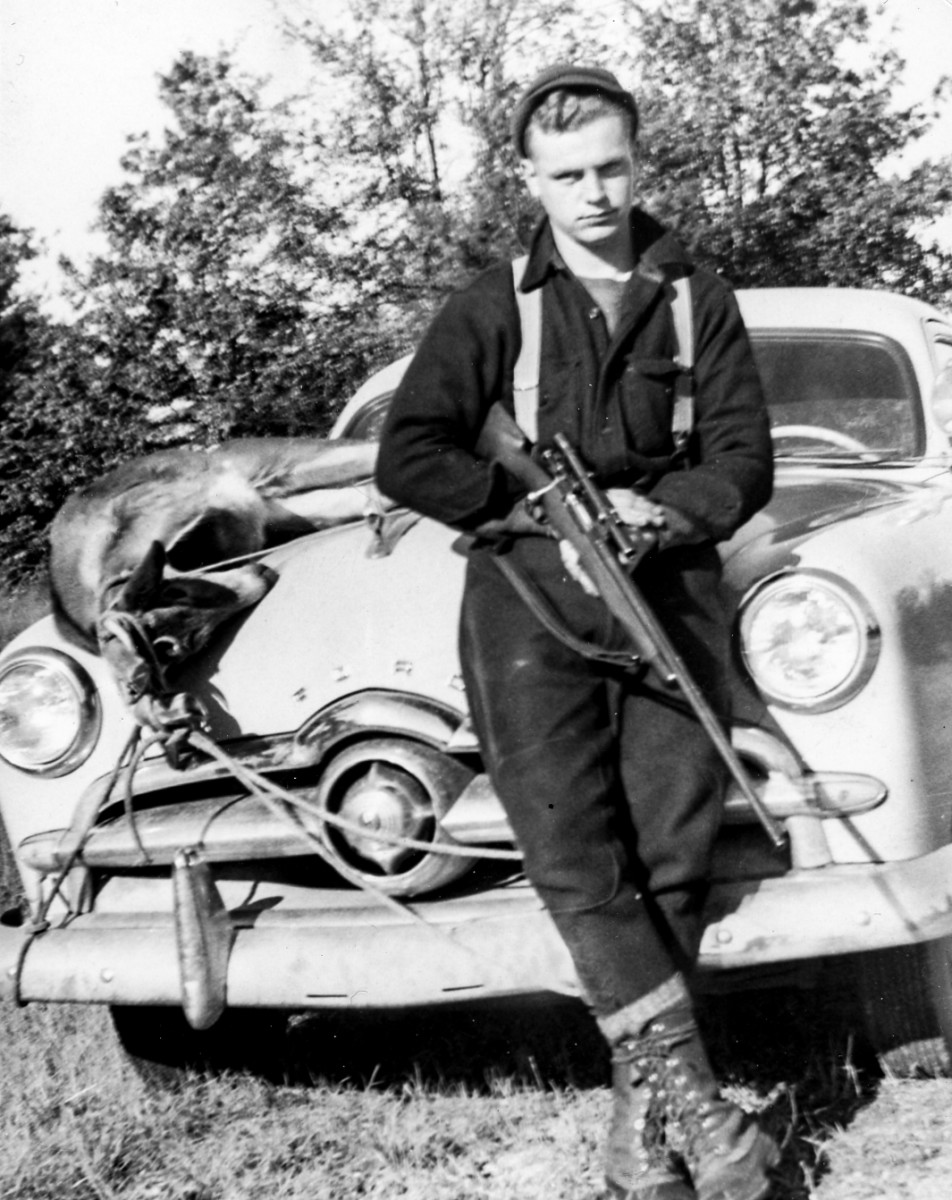 Larry Schrumpf at age 16 with his first deer

In the fall there was duck hunting off Crary’s Point or hunting fox squirrels in the Hayes’ woods or hunting pheasants on the Bob Gregg farm.  I once caught a big snapping turtle from Bull Run located behind the Lineal Hasbrook house.  There lots of bull frogs to catch at night on Skiff Lake, and that was fun, too. In the spring, we speared carp on the Grand River (Shin Blossom smoked them).  On warm August nights we speared garfish using a gas light hung from the front of our boat.  One fall day while fishing, a U.S. Air Force PBY (seaplane) landed on the lake, waved at me, and then took off for places unknown.  When I was older, I really enjoyed hunting with my dad for partridge and deer up north.

In the 1950s, swimming was no longer permitted at the public beaches during the polio epidemic.  We had to go to the schoolhouse for polio shots and later followed up with vaccine-laced sugar cubes.  Clark Lake was an area of abundance having two big fruit orchards, Tremblay’s farm market, and Irma Preston’s eggs and chickens.  There were always roadside stands selling sweet corn, tomatoes, peppers, and cucumbers, too. The orchards produced lots of apples plus cherries, pears, peaches and grapes.

Later on, summer odd jobs around the lake were plentiful for a growing kid like me–such as putting in and taking out docks, mowing lawns and raking leaves.  I used to bike around the end of the lake to work on the Floyd Avis horse farm.  We were good friends with Eddie and Bessie Hayden.  For a time, I worked as a short order cook at The Burg, located beside the old Sanford service station and the Max Scovell home.  Farm work like baling hay on the Lester Bernstein farm or filling silos on one of the Hayes’ farms paid fifty-cents per hour.  There were always cottages needing painting like the cottage I did for Val and Dorothy Seeger and the Avis carriage house that Mr. Avis converted into a home for Beverly, his daughter-in-law.  Then there was to Timberlake cottage, too.  I saved my money to buy my first racing boat, and joined the Ace Racing Club of Jackson.  We raced stock utility class boats on Mud Lake, Grass Lake, Michigan Center, Clark Lake and others.  I once took a third-place win in a Roy VanCamp built boat.  On Sunday mornings, I used our boat to put out and take in the buoys for the Clark Lake Yacht Club sailboat races. 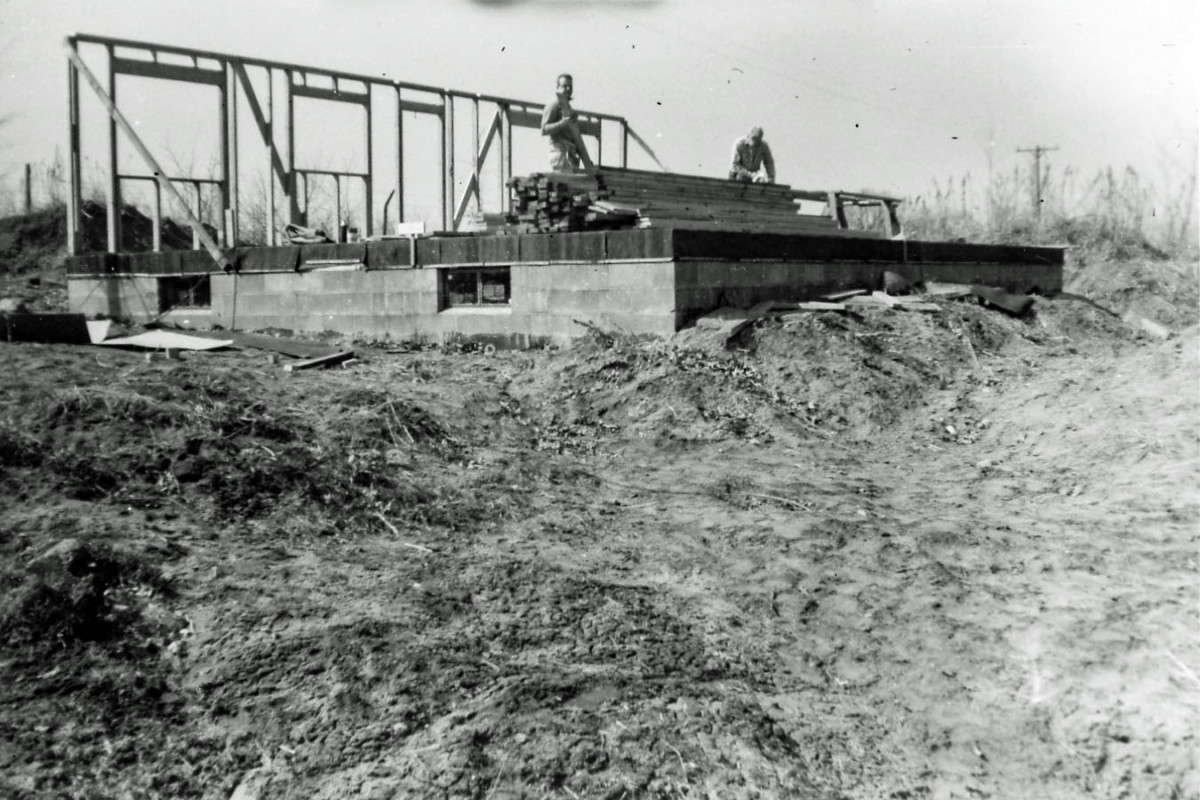 After graduating from Napoleon High School, for a short while I drove a truck for Star Sandstone in Napoleon.  I then moved to Jackson and went to work for Simons Brothers Wholesale Groceries.  I left them when Ted Phillip’s father gave me a drafting job with Design Service, Inc.  Then I was hired by Walker Manufacturing in their product design department.  At the same, I attended Jackson Junior College night school and then transferred to Michigan State.  My education was interrupted by a Selective Service draft notice, so I enlisted in the U.S. Air Force, spending four years on engineering assignments.  When discharged in 1947 (a Korean conflict veteran), I was married with one child.  Returning to wonderful Clark Lake, my wife and I built our first home located at 437 Oakwood.  High overlooking the lake, it backed up to one of the McKone orchards.  I purchased all our lumber from the Dave Neely & Son Lumber Company at Grass Lake (another World War I veteran). 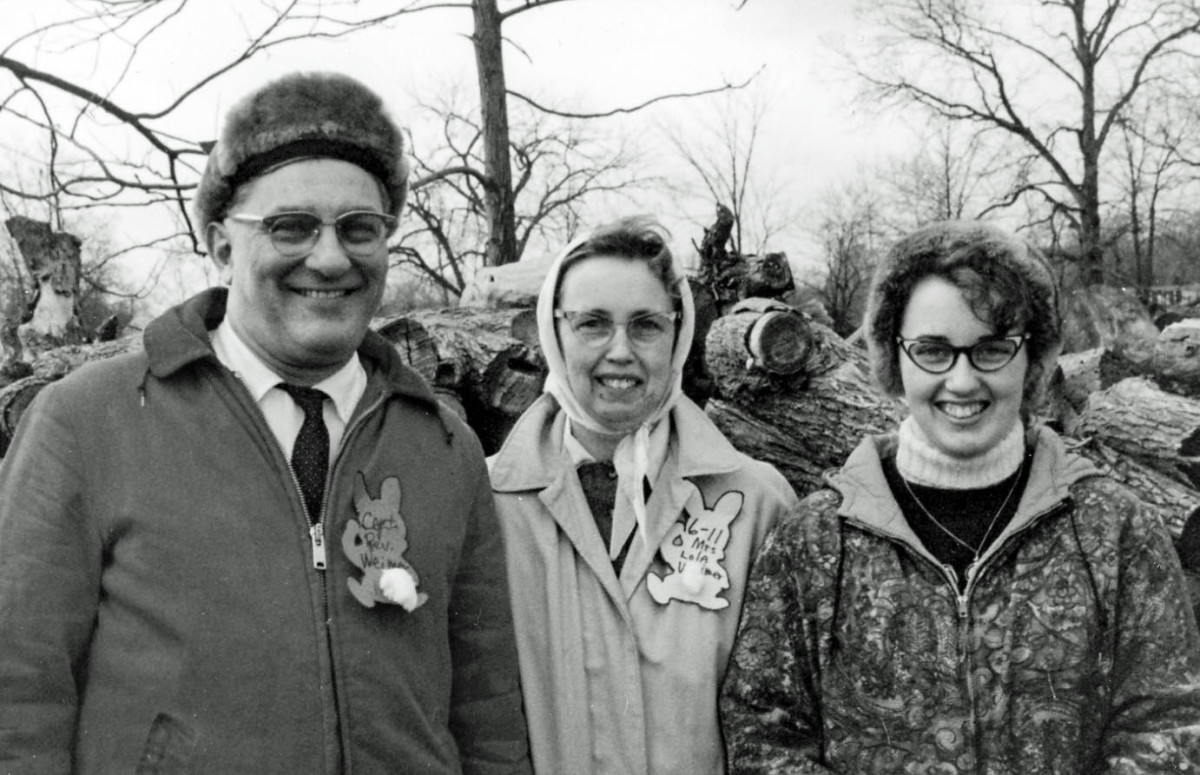 Ken Bouldry, member of the Clark Lake School Board, hired me to clear the land around the new elementary school on North Lake Road,and plant it with grass seed for their new five-acre playground.  Curtis Davis hired me to build a go-cart track complex behind his North Shore Drive cottage on property that he purchased from Gordon Hitt.  Dad and I built a new dock for the Clark Lake Yacht Club which replaced their old plank and sawhorse dock.  Reverend Loyal (Bud) Weimer, who was the second full-time pastor of Clark Lake Community Church, and his wife Lola, and daughter, Carol, were very close to the Schrumpf family.  Carol babysat our three children, as I remember.  One summer Doug Weimer painted our house, too.  Our two youngest children were delivered at Foote Hospital in Jackson by Dr. Jack Bentley.  One summer, my mother, Gladys, and my wife did cottage cleaning for several summer residents.  I used to get my hair cut by Paul Totton (another World War I veteran) in his barber shop that was once the Clark Lake Post Office located next to Roberts Grocery. 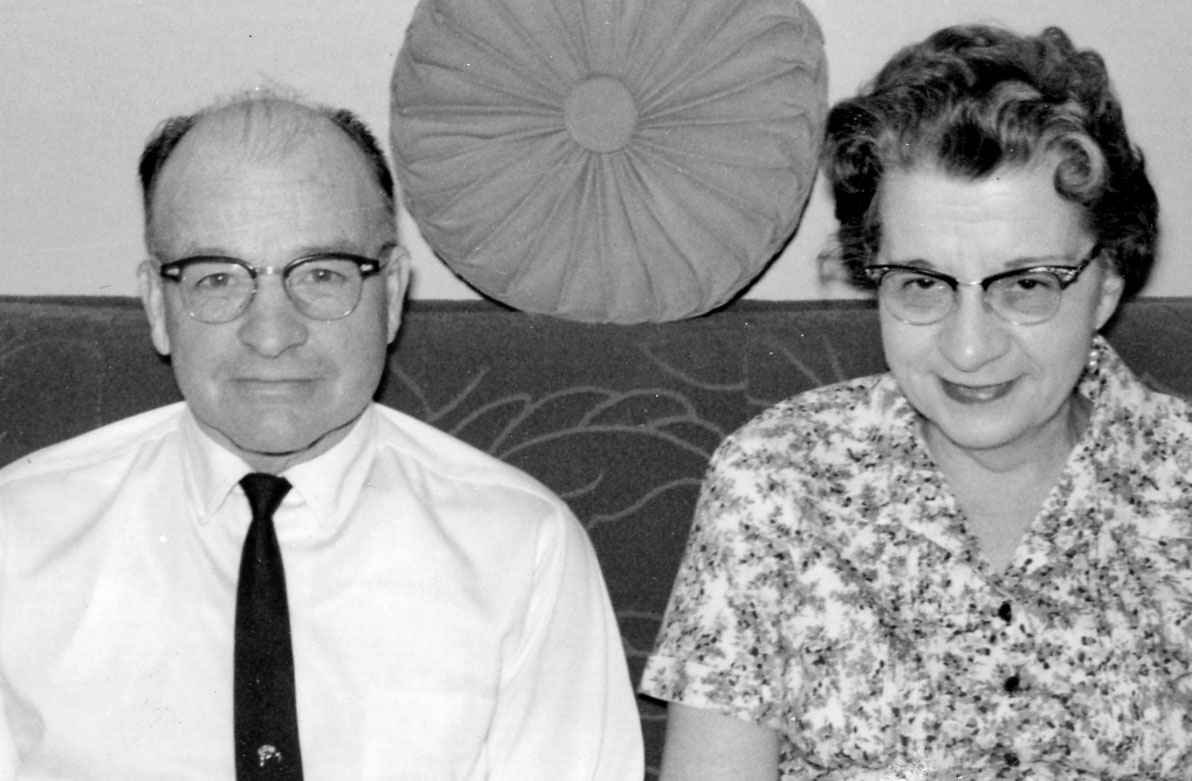 I was hired by Acme Industries, owned by the Weatherwax family of Jackson, working in the tool engineering and product development departments.  At the same time, I was deputized by the Jackson County Sheriff’s Department to patrol the Columbia Township area along with Deputy George Bunker.  George and Alice were wonderful friends of the Schrumpf family.  In 1963 I was hired by Shape Form, Inc., in Rives Junction to develop a patented deep draw process.  After a year, I transferred away from Clark Lake to Samford, Connecticut, as their chief engineer and production manager.

Thank goodness, on short notice, Dick Hitt found a buyer for our Clark Lake home, allowing me to move my wife, DeEtta (another Korean conflict veteran) and children, Greg, Cindy and Kurt to Norwich, Connecticut.

I still miss Clark Lake and all that it has to offer families.  Both of my parents and my brother are buried in the Columbia Township Cemetery, where I expect to be buried someday.  All of this being said–this is the end of my early Clark Lake memories and some of the friends I met along the way.