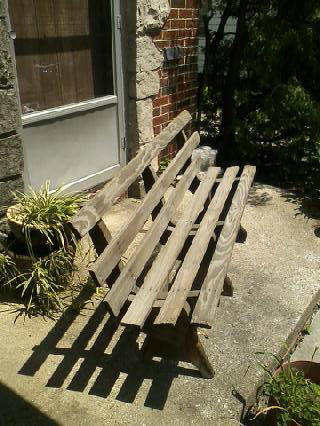 When the Chapel ceased to be used for that purpose, some items were saved. This is one of the benches from the Chapel, and is currently being used at a home in Toledo.

For a Catholic family that spent the summer at Clark Lake, attending Sunday mass at the white clapboard St. Rita Chapel near Kentucky Point was as much a part of being at the Lake as swimming, water skiing, sailing or going to the Beach Bar, the Tap Room, or Star Theater on Saturday nights. It is also among my most vivid of memories of the Lake. We perceived the weekly Catholic mass ritual as a mandatory intrusion into our summer fun. Moreover, it seemed like every Sunday morning was still, quiet and blazing hot at the Lake. Seeing the lake appear to be like glass on those Sunday mornings with the hot sun arising over the Michigan landscape, it was inevitable that virtually every minute we were in that humble chapel, we were dying to be out on the placid and cooling waters of the beautiful Clark Lake.

St. Rita Chapel was built on land donated by the Graziani family of Kentucky Point. Rollo Every of the Eagle Point Hotel arranged to have the chapel building fabricated in Manchester, Michigan and hauled in sections by team and wagon to Clark Lake. The first services were conducted in the St. Rita Chapel in the summer of 1916.

Situated on a narrow lot that fronted on the lake St. Rita Chapel was about thirty feet wide and perhaps fifty or sixty feet long. The exterior of St. Rita Chapel had enormous charm and fit perfectly into the collection of rustic cottages that formed the beautiful Kentucky Park area of Clark Lake. It was an entirely wooden structure with a relatively steep sloping dark green shingle roof. On the upper gable portion of the front side of the chapel, there were small section of stucco and timber trim. A tall steeple jutted out form the dense trees on the lake side of the chapel. The steeple was noticeable only if you approached from the lake side, which few people did. A row of cedar trees hugged the western side of the church and provided privacy for the closest cottage. That cottage had a guest house over a garage visible from the North Shore Drive entrance to the chapel. Additional mature cedar trees were situated at the front of the chapel so that the little white structure, even with its tall steeple, was difficult to notice from the lake.

Inside, the chapel was bare wood everywhere. The walls were open with absolutely no plaster or other covering. The ceiling rafters were likewise open and raw wood. There were lots of cross beams, and at least two or three iron turnbuckle supports running at the level of the eaves across the nave of the chapel holding the walls on either side in place. St. Rita Chapel emanated a decidedly antique and rustic ambiance. With all the exposed wood inside, it also had a distinct fresh woodsy aroma. Because of its age, parts of the chapel sagged and drooped a bit. The chapel had at least six or eight bright stained glass windows with leaded mullions on either of its longer sides. The multicolored windows did not depict biblical scenes as in grander churches, but they might have had small donor dedications near the bottom. Invariably the sun poured into the chapel especially on the east side where it had just risen a few hours earlier. The pointed stained glass windows had a swivel arrangement so that each window could be opened in and out with hinges at top point and at the bottom in the middle of the window frame. On most hot Sunday mornings every window was open. 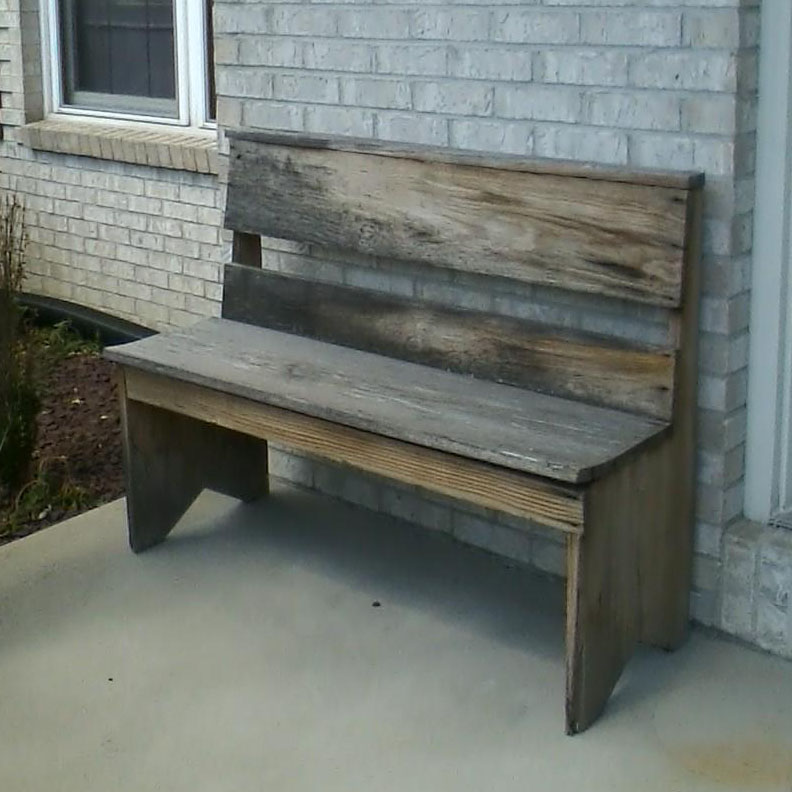 This is another bench from St. Rita’s Chapel. It’s “new home” is in Waterville, Ohio. Thanks to Angel Dandar who photographed these benches for use in Larry Ryan’s “My Clark Lake Story”

The pews were all wood also, and appeared to have been fashioned from two-by-four members arranged in slat formations around chair-like ribs. The pews showed the wear of many years of use such that the wood was smooth as if it had just been sanded and polished. The kneelers in the pews were also raw wood with no padding whatsoever. At the front of the chapel was a modestly ornate white woodwork altar with some gold leaf trim and a backdrop housing a niche with a statue of St. Rita. I believe that the statue of St. Rita is still located in the new Hayes Road church. Additional statues of Mary and Joseph were mounted on the walls on either side of the altar. Facing the altar to the left was a curtain the provided privacy for a confessional. The attending priest heard confessions for about a half hour before every mass. Everything about the structure of St. Rita Chapel was rustic, humble and charming.

Since our family cottage was in the Pleasant View area, it was a short and easy walk down the winding North Shore Drive to the little chapel. On the rare occasion that the weather was bad, or if we were running late (late would be arriving less than 15 minutes before mass was due to start), we would drive to the chapel. There was plenty room to park cars in the grassy lot with the dense woods behind it at the intersection of North Shore Drive and Kentucky Avenue. Until the new Hayes Road church was built in 1967, the North Shore St. Rita was strictly a summer chapel.

Each summer the first services were offered in mid-June, and masses were conducted every Sunday through Labor Day weekend when the chapel, like nearly every cottage at Clark Lake, was closed for the season. On the several pre-season Sunday’s, there was only one mass, generally around 9:00 am, and on those days the congregation was sparse. You knew everyone that was in attendance—the Blair’s (with their children KC, Joanie and Linda), The Dunnigan’s, The Bullinger’s, Larry and Cease Miller, the Reynold’s (Betsy, Joey, Flip and Georgie and their parents, Mary and Phil) the North’s, the Ligibel’s, the Vinson’s, the Ryan’s and a few others). Especially in those pre-Vatican II days, even summer church attendance demanded attention to appearance. Light cotton shirtwaist dresses and sometimes hats (or at least a summery scarf) for women constituted the expected apparel. For men long pants, preferably khakis (never shorts or jeans) and a pressed dress shirt or a sport shirt were the order of the day. Especially as we approached the height of the summer season, Larry Miller was always dressed to the nines in bright colored slacks and a sporty blazer with a bright colored shirt and tie. Mr. Miller always looked so dapper as if he were ready to stroll along Worth Avenue in Palm Beach. Keith Blair and Mr. Bullinger were frequent ushers and always dressed in suit and tie. Also at the height of the summer, groups of boys and girls from summer camps (Camp Storer at Stoney Lake and other Irish Hills camps) would add to the crowd and were always in more informal attire. 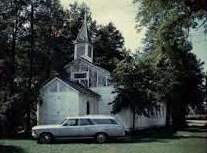 Around the Fourth of July, the masses were increased to two services each Sunday—8:00 AM and 9:30 AM. The 8:00 AM mass was preferred by our family as it was not as crowded, and at that earlier hour the sun did not blast down on the chapel so intensely. Most importantly, If you attended the early mass, you could be back at the cottage and in a bathing suit by 9:00 AM. Especially in later years at the height of the summer season, the chapel was so crowded that it was standing room only, especially at the 9:30 mass. Every pew was fully occupied, and SRO attendees gathered around the wide open double doors of the main entrance at the back of the chapel and at every one of the windows on the east side of the chapel.

The priests who came to St. Rita Chapel in those mid 1950 years were from Our Lady of Fatima Church in Michigan Center. It was Father Paul Donovan, who was instrumental in purchasing the land on the south side of the lake on Hayes Road and arranging for the construction of the new St. Rita chapel in 1967.

Except for the Sunday morning services at the chapel, religion was seldom a factor or a topic of conversation the Lake. As I look at the satellite view of “Google Maps” from my California home computer, and I zoom in closely to the Kentucky Park area of beautiful Clark Lake, in spite of the fact that the once rustic cottages of the Kentucky Park area have been greatly expanded or replaced by million dollar lakefront mansions, I can still recognize that sliver of a land that St. Rita Chapel occupied from 1916 through 1967. And as I look at the Google map closer, I can even see where, after every 1950’s St. Rita Chapel summer mass, those wonderful donuts were sold—cinnamon, powdered sugar or plain—they were so fresh and delicious at fifty cents a dozen. Isn’t technology terrific!