It was one of those mornings…You know the kind I’m talking about. It’s August, the sun is starting to get high, there is mist coming up from the super calm water. You might be wearing shorts or a bathing suit, but definitively it’s a sweatshirt morning. If this had been a week day we would have already had a practice session done on the slalom course. But, this was a Sunday morning, the last day of the Jackson Citizen Patriot Water Ski Tournament, known as “The Cit Pat”put on by the Clark Lake Pine Riders Water Ski Club. I was walking down the dock by myself since my brother and sister would be coming later in the “speed boat”. Mom and Dad would arrive by car with all the supplies to operate the concession stand. I was headed to the “Sea Flea” to make the trip to the Head of the Lake and the old school house, the site of the tournament. This special little eight foot boat was purchased from the Patterson girls down the way and rebuilt from bow to stern by my Dad over the winter. So, I jump in the boat and fire up the 16-horsepower Scott-Atwater with Bail-A-Matic, lean down to unhook the stern lines—and oh, the smell of outboard motor exhaust in the morning!

I arrive at the old school and all the usual suspects are there—Dick Bergy president of those evil Ski Devils from Devils Lake, Big Ed Hall to do the announcing and of course the members of the ski club. We may even have some nationally known skiers like Larry Penacho, Jimmie “The Flea” Jackson, or the one and only Warren Witherell. Lynn Vermeulen was only second to him on my lists of greats.

Speaking of great skiers, we had our own. Of course Lynn, National Slalom Champ; Phil Curtis, Masters Champ; the Krupa boys, Gary and Tony; and Jon Broderick, Cypress Gardens show skier. (Wow, could Jon fly off the jump). In later years Lynn’s sister Kay would become a world class trick skier. All from Clark Lake!

Skiing in the 10 and under division, I had skied all my events the day before. Today I would stay dry, warm, and provide support—until our president, Lynn Vermeulen, asked me to put the slalom course in the water. 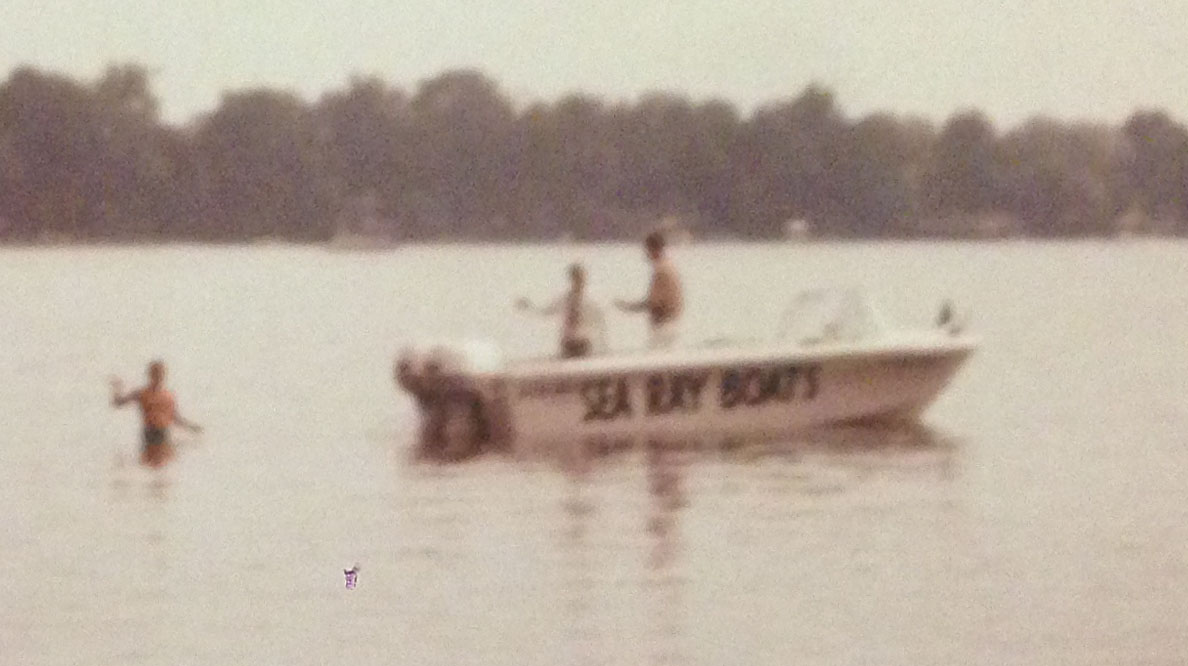 This is the Sea Ray towboat with the high gunwales. In this photo, Buzz is preparing to ski in the tournament.

You see, we had to remove the slalom balls every night because those evil fisherman would cut the balls loose. Seems like the best fishing areas were always around our ski areas. Did I mention it was a cold morning? In answer to Lynn’s request, I said “no way!” Lynn pleaded with me. I finally caved with a condition. I said I would do it, but he would let me take the “Twin Rig” to put in the course. Unbelievably, he agreed!!!!!! A Twin Rig is an unbelievably fabulous boat. Prior to the Ski Nautiques and Master Crafts used as tow boats for tournaments, we used a boat with two motors to provide enough power to pull the skier, instead of the skier pulling the boat around. If you have never heard the beautiful sound of twin engines going in-and-out of sync, it is wonderful. In years past the boat had always been low slung and wide Hydrodyne with huge Twin Mercs, with red lips and shark teeth painted at the waterline on the bow. This year Sea Ray Boats was the sponsor, and it was a kind of pig of a boat with a very large wake, which I had remembered from the day before. But, still it was a Twin Rig with two beautiful very large V-4 white 75-horse Johnson’s. You know, the kind Flip Reynolds used to work on at Eagle Point.

Buzz on the tournament trick run

Buzzy picks some hardware at the Cit Pat Tournament

I went slowly out to the location of the slalom course, which ran parallel to the shore at the Head of the Lake. I figured that I would start at the end closest to the school, that way I could open that baby up and roar back. I jumped in to put in the first ball, and left the engines idling. I went to get back in–and, oh crap, the free board sides of the Sea Ray were so high I couldn’t get back in! I had done this before, but didn’t know if it would work on this boat. I swam to the stern—and oh, the smell of exhaust, again—I put my foot on the cavitation plate of the motor, stood up hugging that big V-4, and I was in! I finished and was ready to roar back to shore, but not before I tried the maneuver that was only possible with a Twin Rig. If you put one motor in forward and the other in reverse it turns on a dime.

Done. Back to report to Lynn that all is good. Lynn asked me to check the gas level on the gas tanks, and I told him they were low. Then the most wonderful words came out his mouth,“Take it down to Eagle Point, and fill it up.” “YES SIR!!!” Wow, nine years old, standing up to see over the bow, and at the helm. What a ride, sunny, calm, and two huge V-4’s going in and out of sync roaring down the Lake to Eagle Point and back. 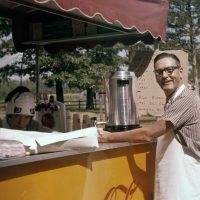 Buzzy’s dad, Ern Belcher, ran the concession stand at this Cit Pat Tournament. The location was the Columbia Township Park at the head of the lake. 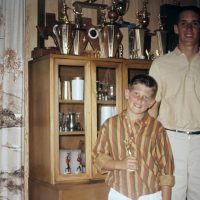