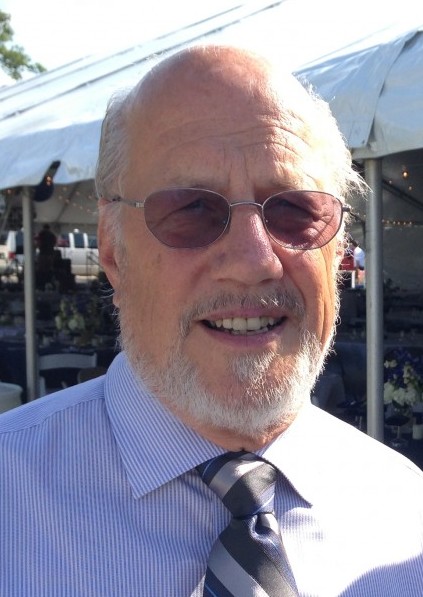 In 1956 and 1957, after moving to the west side of Eagle Point, I began to spend more time with Butch Fish and Jim Swain. At that time, Butch lived just up the road, between our cottage and the Hotel; and Jim lived about eight cottages the other direction, along Lakeview Drive.

This story recalls my first real exposure to a business venture, what I now call the “Clark Lake Cricket Company.” One bright sunny day in the middle of July, when Jim Swain, Butch Fish, and I were filling our faces with some wild raspberries and talking about the fun of the Jackson County Fair, it was decided that we should work together to raise money for a joint excursion that year. This led to the logical question of “How can we earn enough money?” As I recall, Butch was the one who delivered the excellent knowledge that there was good money to be made in catching and selling fish bait! “We can sell night crawlers to Rosa’s (the bait store/garage at the corner of Jefferson and Hyde Roads) or Ennis in Brooklyn for two for a penny. Since it is often the case that great business ventures develop from such casual discussions, we were soon in the bait business. Unfortunately we hadn’t much rain during the recent days, and the night crawler collection business was a little slow. 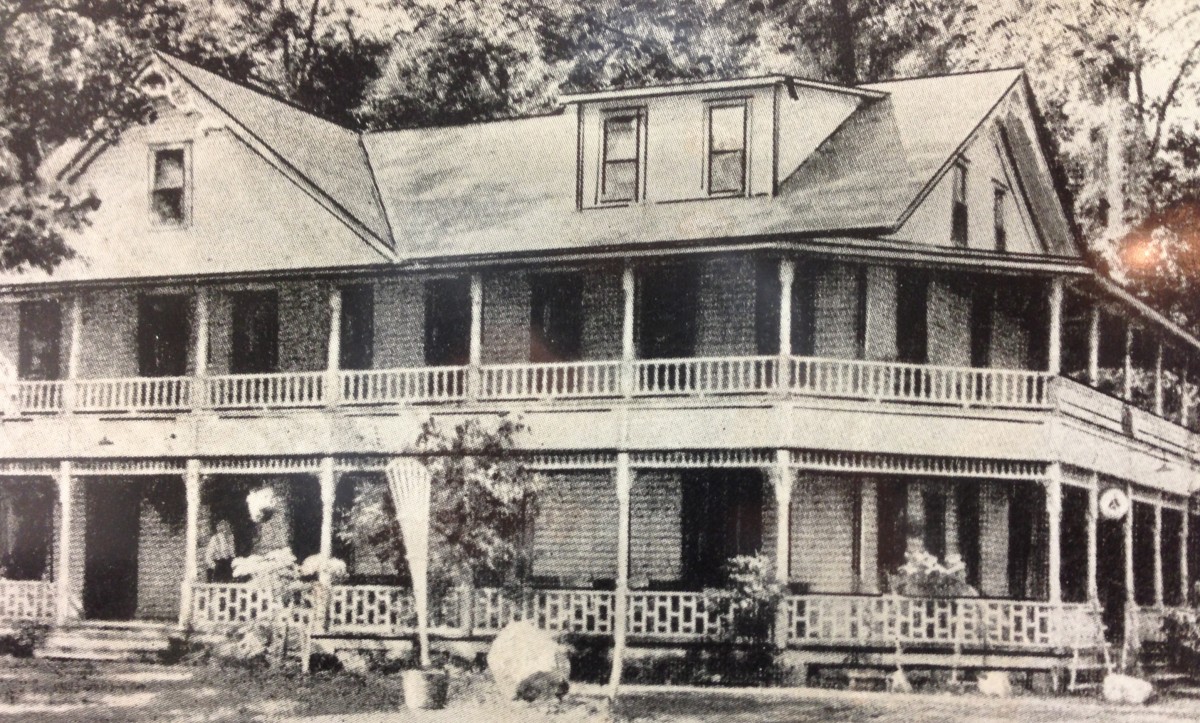 Eagle Point Hotel. Bill’s family had a summer place on the east side of the Point, and later moved their summer location to the west side.

The next suggestion from Butch was that we could supplement our sale of night crawlers by collecting crickets. August was just around the corner, and crickets were the preferred bait in August–and there was no shortage of crickets. Besides, Jim’s dad had perfected a great bait box for crickets, where we could feed and keep fairly large quantities to minimize our trips to market.

We first looked for our crickets in the usual places, in piles of dry leaves, under loose rocks, or under any piece of paper or board that had lain in the same place for a day or two. But once again the picking was relatively slim. It became apparent that if we were ever going to raise enough money to spend at the fair we’d have to find a better system.

One day as Jim and I were crossing a field on our way to see Butch we kicked a drying bale of hay that had been cut and bailed a few days earlier. “Wow!” I said, “Look at all the crickets.” And before we could think about it we were both on our hands and knees trying to catch crickets that seemed to ooze from every pore of that bale. It became apparent that we might need to expand our workforce, and Butch’s younger brother, Bob, was a natural choice. We quickly got the other two boys and went back to that field to roll over every bale we could find. Our cricket stock leaped forward many fold, and we had to expand our warehouse by building another couple of cricket cages. We soon learned that if we waited until late afternoon, when it was hot, the crickets would crawl up into a hay bale, and we could pick up that bale and shake them out into someone else’s waiting hands. Now not as many got away. 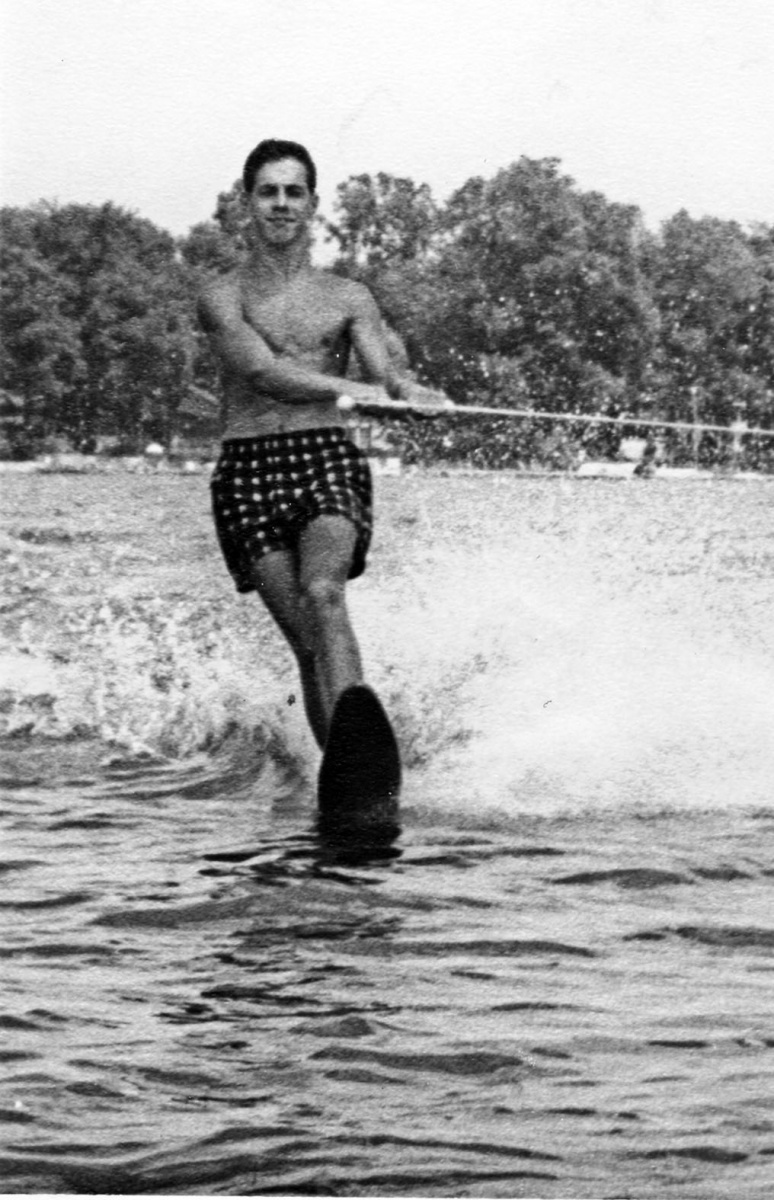 Bill Leutz on a slalom. This photo was taken about three years after the formation of the Clark Lake Cricket Company.

We also found a big cardboard box from some home appliance, a refrigerator or a range, I can’t recall which, but it was pretty big. By laying this down on the freshly cut grass along the roadside we provided another form of artificial cover. This also gave us a relatively prolific source of crickets, providing we only checked it every three to four days. When we went back more often, there was not enough time for a new crop to discover this great shelter.

We were now catching enough crickets, and occasional earthworms, that we needed to take our stock to market almost every week, and the money in Jim’s cigar box was growing. By the time the fair opened in late August, we had a little over $23 each. I think that you can probably work out the math, but take it from me, at two for a penny, $92 requires a lot of crickets! There were many nights that summer when I’d close my eyes to sleep and see nothing but crickets hopping around in the dark.

And so the business side of this effort was completed.

Note– But wait, there’s more! How did this crew spend the money—did they get to the fair or what? Check out Bill’s newly published book The Clams Are Still Baking: Memories of Clark Lake, for the rest of the story. It’s now available online at www.williamleutzbooks.com.  Bill plans a book-signing event next spring when he returns from his winter home in Oklahoma.