The Eagle Point Chamber of Commerce

Was there ever an organization called the Eagle Point Chamber of Commerce?  The letter below suggests that it existed, but perhaps only in jest.  This letter is addressed to Ed Schill in which he is lauded for “gallant destruction of worm nests in a number of trees along the gold coast.”  It’s hard to tell how much of the letter is facetious, including whether Sir Edwin actually did take out some worms.  Another question begs an answer.  In the 1940s, what part of Clark Lake was considered the “gold coast?”  [see Kellie Garris comment below].

The letter was dated August 14, 1944, which takes it back 76 years.  It’s written on Eagle Point Hotel stationery.  Please read the letter, and then scroll down for some 2020 context. 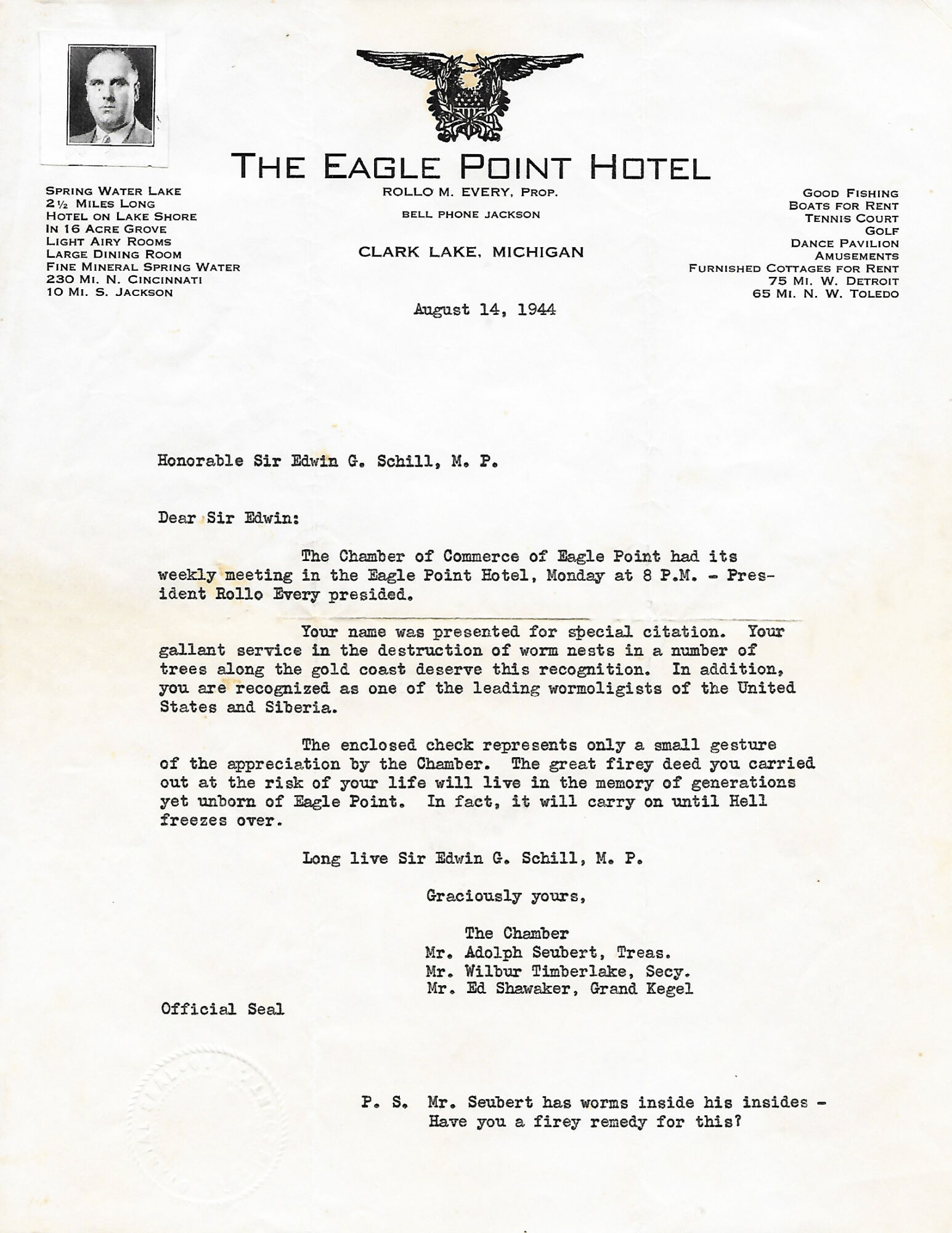 Most people at the lake know the name Rollo Every.  For many years, he owned the Eagle Point Resort, where so many memories were created.  Most recently, Rollo was remembered as his cottage in the Eagle Point Cove changed ownership.  (To read that story, please click here.  And to research nearly endless background on Rollo and the Point, simply type Rollo into the search bar).

So, who are the others?  The recipient of the letter was Toledoan Edwin G. Schill.  He brought his family to Clark Lake and purchased Sunset Glen at 1024 Eagle Point Road from William Preece.  Ed and Mae Schill had two daughters.  Dorothy married Roger Lyons who had a dental practice in Jackson.  Their eldest, Roger, recently found this letter among his mother’s belongings.  We have him to thank for saving this Clark Lake artifact. (Read Dorothy Lyons’ My Clark Lake Story by clicking here.  For Roger’s My Clark Lake Story, click here).

Adolph Seubert, also from Toledo, built a cottage at 1052 Eagle Point Road in 1938.  It’s fitting that he was the treasurer of the Eagle Point Chamber of Commerce.  Adolph was an officer of Toledo Trust, a well known bank in Toledo.  In his retirement years, he was known to neighbor kids as “Uncle Adolph.”  It was tradition that kids would knock on his door.  Uncle Adolph, or his wife Ethel, would award the lucky visitor a sucker. The Seubert cottage was later purchased by Howard and Shirley Burns. They eventually made this Clark Lake location their permanent home.  The house is now owned by the Ziemba’s.

Wilbur Timberlake was the secretary.  The Timberlake cottage, Windward, at 1080 Eagle Point, remains in the hands of the family.  You can read about the family history in Charlie Timberlake’s My Clark Lake Story.

The Shawaker’s cottage today remains in family ownership.  Ed and Louisa Shawaker purchased the cottage at 1090 Eagle Point in 1921. Louisa was a great aunt to Bill Leutz, Ann Swain and siblings.  You can read a more recent slice of Shawaker history by clicking here.

There is some irony to this letter.  In a way, Ed Schill’s deed he carried out at the “risk of his life will live in the memory of generations yet unborn of Eagle Point.”  That’s us! 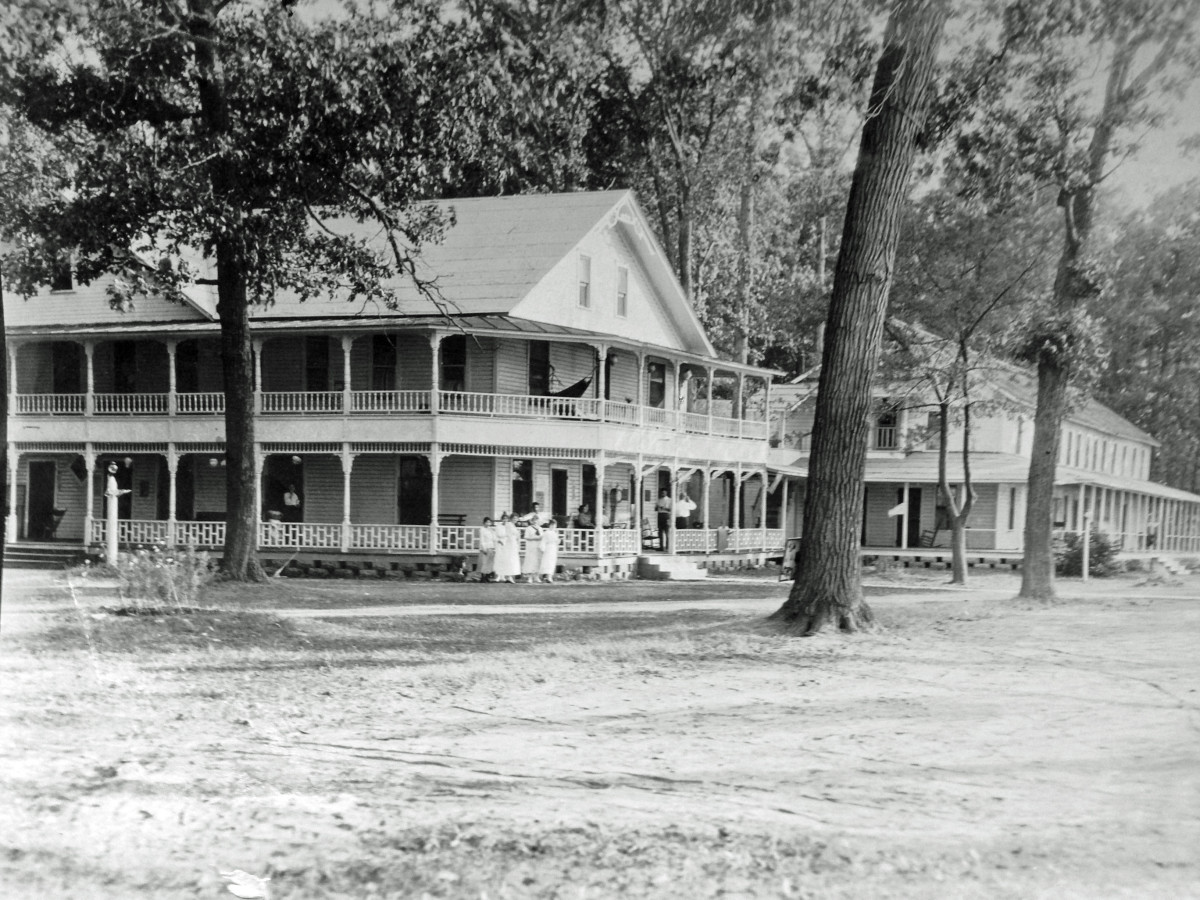 Today, the Eagle Point Hotel sign hangs on the wall of the Clark Lake Community Center, which is dedicated to preserving Clark Lake’s past.

Eagle Point Drive along the lake was lovingly referred to as “Gold Coast.”  In later years, my Daddy (“Geno” Garris) was teased that his cottage was on the border and not part of the Gold Coast.  A sign was made in jest and used to mark the line.

Thanks for the story…it brought back many cherished memories.