The Reeds of Clarklake

James B. & Lydia Reed “emigrated” from upstate New York to Clarklake in 1861 and purchased farms one mile north of Clarklake. 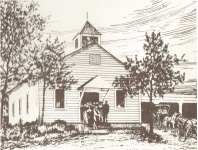 Their children, Mary (Reed) Hill, Jay D. Reed and William Reed were 3 of the 12 family’s that met in the Red Brick School House on the West end of Clark’s Lake in 1868 to start the Clarklake Baptist Church.  The first church (on the corner of Jefferson and Hyde roads) was dedicated in 1871. It burned in 1912.

Great uncle Jay D. Reed was a joint-owner of the Lakeside Grocery (now the Law Offices of Denis Hurst) and was the first Postmaster of Clarklake.  The first post office moved from the store and operated from the family home directly behind the store on Vining street. Locals received their mail on the front porch of the house, through a Dutch door that opened into a room of the house.

Later it was moved to the railway station at the end of Vining Street. Uncle Jay was elected Justice of the Peace in 1882. Some Clarklake residents (old folks indeed) may remember Wink Reed as the assistant mail carrier in the early 1950’s. Marion Reed followed Wink and carried mail from the 1950’s until his retirement, at 70, in 1977. The Reed postal tradition lived on, with Marion’s daughter, Patti, and his daughter-in-law, Gretchen, carrying rural mail until 2011. 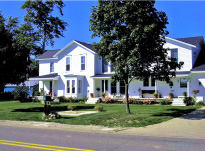 In 1874 Great Uncle Jay built the Farmhouse that is still on the corner of Reed and Hyde roads (slightly expanded) that is currently my home.

Both of James Reed’s sons (and their sons) continued to operate dairy farms north of the lake. The brothers and their families continued to be an active part of the Clarklake Baptist Church, participating as deacons, ushers, and choir members.

G. Ray Reed had four sons: Marion, Bus, Bob, and Raynor.  Will Reed had two sons: Donald and Wink. Five of those six cousins’ begat (what a neat word) twelve sons that became know as the “Dozen Cousins”. The sixth cousin, Donald and his wife Paula lived in Jefferson.  Their property is now included in Lake Columbia (if you know where Paula drive or Donald point are located at Lake Columbia … well, now you know the rest of the story).

Uncle Don and Aunt Paula were active in the Brooklyn community, and their children attended the Brooklyn schools. Many who live in Brooklyn probably know Beverly (Reed) Wahr and may even have had your hair cut by Roger Reed. They (along with brother Marland and Sister Marcia) are the “Big City” cousins of the Dozen cousins. Bev and her husband Bob, and Roger continue to actively participate in making the Brooklyn community a better place to live.

The Clarklake Dozen cousins were: Doug, Keith, Butch (that would be me), Gary, Bill, David, Dick, Larry, Jim, Bob, Tom and Terry (that’s twelve … all boys). We were joined later by a passel (another great word) of girls. Patti, Cheri, Noreen, and Denise, spoiled an almost perfect run of boys (no bias here).

In the continuing tradition of the Reed family, we (The fifth generation of Clark Lake Reed’s) were raised in the Clarklake Baptist Church. 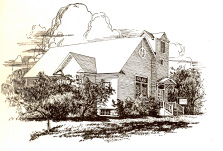 Many of the Dozen Cousins attended the Red Brick School House at the west end of the lake. For a time (long before my generation) G. Ray Reed (grandfather) was the schoolmaster of that school. The two room school held eight grades (later a third room was added). As you know, the school has long since been torn down.

The Red Brick Schoolhouse was a great place to grow up and learn! During recesses we waded in the lake. Winter meant ice-skating. Fall was football (tackle, without pads) and spring was sandlot baseball. When we played baseball with another school, we played on the Eagle Point ball field. We had no gym, no pool, no band, and no cafeteria! We were deprived and didn’t even know it! During the summer we helped on the farms and “hung out” at the west end of the lake.

The Vining street home of Uncle Bob and Aunt Lila Jean (the original post office) was Reed central for lake activities and became the “after-church” gathering place, where lots of Reed’s met for coffee and fresh donuts. Two traits that Reed’s excel in: talking and eating!

In the early years, 75% (my guess) of the lake homes were cottages; only open during the warm months. May year-round residents made extra money helping “cottagers” open and close their summer homes. In the early 1900’s, when the Reed family owned Lakeside Grocery, my father and uncles used a horse and cart to haul steamer trunks from the railway station at the west end of Vining street to the steam boat dock.

Block ice was harvested from the lake during the winter and stored in a shed behind the grocery. Sawdust from the winter firewood harvest was used to keep the ice from forming one giant block.

Cottagers were good for the local economy, they were good neighbors, and they brought fun to the community. He became especially fun when I became a teenager and was able to appreciate all of the cute Ohio girls who visited the lake. Cottagers never seemed to be in a hurry! They came to relax, enjoy the quiet of a summer on the lake, and to have fun.

Cottagers worshipped with us in our local churches (one of the reasons that Clarklake Baptist Church became Clarklake Community Church was to ensure that all denominations knew that they were welcome). The original St. Rita’s Catholic Church was established near Kentucky Point, on land provided by a member of the Clarklake, Baptist Church, Gordon Hitt, to ensure that our Catholic guests could worship without having to travel the long distance to Brooklyn or Irish Hills.

During my youth, lakefront cottagers used the spring-fed wells in their yards to cool watermelons, soft drinks, and “adult” beverages. Unfortunately, I’m told (and I’m sticking to my story), some of these items occasionally “evaporated”.

In those days, we could walk completely around the lakeshore with encountering many fences or irate folks. Cottagers acted as if they were “guests” in our community and we tended to treat them as guests.

Today the sixth and seventh generation of Reed’s continues to worship in the church founded by our forefathers and will continue to be a part of the growing history of Clarklake.