The Little Red Schoolhouse on the Lake

By Dick Hitt and Walt Reed

The following story of early life at Clark Lake was written by Gordon Hitt in 1968. Gordon was the father of Richard “Dick” Hitt who contributed a lot of talent and effort to move the former Graziani cottage to its present position in the county park where it serves as the Clark Lake Community Center and a tribute to the history of the lake. Both father and son have died. Both play a large role in the history of the community.

As you read the following story you may find the education system that is described somewhat humorous and maybe somewhat shocking in light of current school systems. My grandfather, G. Ray Reed, was recruited to become a teacher because he could “rough up” local farm boys who were “causing a ruckus”. And he did. Often with a fist! Notwithstanding his physical abilities, I am told that he also was an effective educator.

This story appeared in the Brooklyn Exponent in 1982. I have edited the story to give the highlights of schooldays at the “Little Red Schoolhouse” that was located on the west end of the lake. Many members of the community spent their early childhood in that schoolhouse. Ask us . . . we will gladly tell you of our early education.
__________________________________

It really sounded fascinating! One morning we were given little round dinner pails, a new slate, and a couple of penny pencils in a little pencil box and told to go to the school beyond the village. By “we” I mean Gertrude and I. When I arrived at the school and met the tall young teacher – G. Ray Reed – I was quite definitely decided this was not my dish. I soon developed a “stomach ache”. The teacher accepted my word and let me go home. I repeated this process the next day and soon I had a quiet talk with the management. I was bluffing: I must forget the nonsense and accept the inevitable. 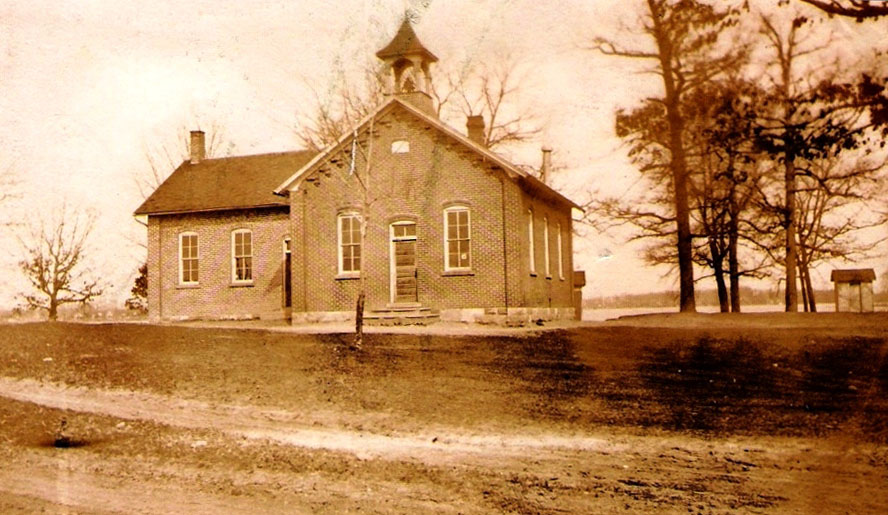 Clark Lake School House, about 1900, located in what is now the Columbia Township Park on Hyde Road. Notice the small building to the far right.  By 1945 there was indoor plumbing.

Older boys were quick to notice my timidity and of course that was an invitation to tease and pester. They spit on my shoes, pulled my hair, made fun and gave me the usual initiation. One must fight or cry. I elected to do the latter. That night I told all to my father. He smiled and said he would fix that up. But the next morning to my amazement he told me to get a paper sack. Then we proceeded to go to an apple tree with lovely juicy apples. He filled the sack with nice ones and said. “Now when you get to school, I want you the first thing to give one of these apples to every boy who teased you yesterday.” That didn’t seem like good sense to me, but I didn’t say so. Much to my surprise those little apple gifts did the trick, turned darkness into light, gloom and despair into gladness. My father looked quite large in my eyes – larger than ever before.
In the little brick schoolhouse all grades sat, studied and recited in the same room. So that older grades could get their lessons, the session started with the primer class – that was a few little tots, including my sister Gertrude and myself. A large chart on an easel presented the first words large: such as d-o-g, c-a-t, y-o-u, etc.

The teacher had a long pointer and mouthed out the sounds of different letters. It was all phonetics. For writing the teacher came to each desk, placed our slate pencil in our hands, took our clumsy fists in his and steered us in forming the letters. We were on the way!

As time went on, we began to catch on. Between classes the teacher moved to the rear of the room and stood where he could oversee, reading a book, or pretending to. When anyone misbehaved whispered or threw a paper wad, he was chastised with a twisted ear, a mild slap on the head with a loosely held book or made to stand in the corner, much to the mortification of the one being punished. For gross misconduct, the teacher took action with a long walnut ruler turning the miscreant over a desk. This was a public spectacle, and example to all.

As older classes went forward to read or recite, answer questions, the system of pre-education began to take effect. We learned a lot by listening to our elders – and these elders did seem like old men and women to us. In looking back it seems to me that seventh and eighth graders had whiskers.

Recess lasted 15 minutes. The noon hour meant dinner pails and then games – games kids have always played, one-old-cat, prison goal, pom-pom-pull-away, and duck on the rock. In the spring of the year, we cut willows on the lakeshore for whips and from which were made whistles. If we could find a sassafras tree, we chewed a branch.

Before Christmas, the lake started to freeze; just around the edge. This always brought a shout of joy. We delighted in getting on the ice. We would find a spot near the shore where the ice would become rubber as we slid across it – a “hickory bender” we called it. The school location afforded many made-to-order amusements, inventions of the pupils. We made slingshots and tried to hit the passing freight trains.

In the winter when blizzards would build up high snow bands along the roads, we were very happy. Perhaps the road would become so drifted the teacher couldn’t get there. Oft times during bad snow spells, farmers let down the fences made, often of rails, so travelers could use the fields until the sun melted the snow.

Skating to school in winter was allowed after the ice was good and thick. If you were truly dependable, you might be allowed to skate around the shore even before the lake was frozen over. After ice fishing began and horses began crossing, then we could skate or walk across to school.

On bad snow nights, it was always a great thrill if father came with the sleigh to pick us up and take us home. Winter usually provided several months of sleighing.

Arbor Day was special day in the spring when scholars brought rakes and cleaned up the school yard and planted a tree. It was a holiday from studying, greatly looked forward to.

School started in the morning with a prayer by the teacher and a period of singing songs out of a “knapsack”, a soft compilation of favorite songs. Scholars were allowed to pick the tunes: “Twenty Froggies went to school”, “Down by the Grassy Pool”, “King of the Cannibal islands”. The songs and words were specially chosen for young minds…

I am sure some early songs would have brought parent revolt if used a generation or later. Sometimes, the teacher altered the program and read a classic. I recall once we read Alice in Wonderland. The advanced spelling book also included many choice verses and sayings at the head of the pages. It seems in retrospect these were perhaps the high point of early education because we were made to memorize and repeat them and write them. Some of these stand us in good stead in times of stress today.

Penmanship was a full-fledged subject. We had to buy “copy books” with sentences at the top of each page written in “Spenserian”, straight up and down scripts. We filled each page with this sentence written in our own hand as an attempt to copy the heading in perfection. But writing proved to be a thing of individual execution.

Teachers were often young people of the community of good character who had finished high school. (Not many did.) Later it became necessary to go to the county seat and take a teacher’s examination. There was a county school commissioner, Mr. Sattler, a stern, portly man with one bad eye. He came to visit the school at least once each year. He would leave in an hour or so, much to the relief of the pupils and probably teacher. We had a song, sometimes sung, but I think we little meant, “Why Don’t Parents Visit the School?”

Gertrude and I went to Jackson, stayed with my great aunt on Maple Avenue. I think the examination took three days. It was held in a room in the old court house. Results of the exam came to us in the mail several weeks later. The diploma made us eligible to enter Michigan Agricultural College, the forerunner of Michigan State University.

Winter fires were built in the school each morning by Will Hardy who received $5 a month. Teachers in early days got $20 a month; in my day, they received $40 per month and paid their board. My teachers at Clarklake were G. Ray Reed, Ed Newcomb, Alice Leggett and a Miss Hilton. They were all good teachers.