I can imagine 12 year-old Obwandiyag boy stopping for a swim in Clark Lake. He might be on his way to see his mother’s Potawatomi birthplace. This future leader would have jogged along North Stoney Lake Road, turned south towards what is now the Beach Bar. 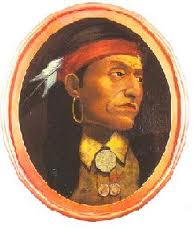 An artist’s guess as to the appearance of Chief Pontiac

Back in 1734 these roads were Indian trails. A man could cover 20 miles a day then…30 if he was in a hurry. Hunters used rivers, streams and the stars like we use road signs, maps and our global positioning systems. This future leader may have paddled his birch bark canoe up Michigan’s coastline to hear Elders speak of the good-old-days while they sat around a tribal cooking fire. Or, there may have been a girl involved. He could have heard legends about the time before white settlers built log cabins on ancestral hunting grounds as he and his band traveled, moving their village to follow the trail of plains buffalo. Or he may have been riding his pony with his Ottawa father while the older man described hunting bear before muskets, when hunters skilled with bows harvested animals for food and clothing.

My research on the Internet revealed that as soon as Obwandiyag was old enough to fight in battle, he distinguished himself with courage and the number of scalps he took. Warriors followed Pontiac out of respect by his mid-20’s; and because of his commanding presence, during peace. His strategic organization skills and passion for his people’s survival propelled him into serving as inter-tribal Chief for the Three Fires Nations. This territory covered the bottom half of Michigan and the top of Ohio. Pontiac’s warriors fought the English alongside the French until the King of France ceded all French lands to the English in the 1762 Treaty of Paris. The conquerers claimed even more territory in the Ohio Valley, built forts and brought in European settlers.

The Ottawa, Chippewa, and Potawatomi Nations were denied the tools, blankets, liquor, guns and gunpowder they had come to depend upon from the French, and which were promised by English Governor-General Jeffry Amherst.

As a member of the Healing Lodge of the Three Fires Confederation, Chief Pontiac called his tribesmen to council in 1763 at a Potawatomi village on the banks of the Ecorse River in what is now Lincoln Park, Michigan. His plan was to promote peace through reconciliation, and to resolve differences without violence. The decision making process respected by all tribal nations involved gathering seven generations of knowledge, with a viewpoint from each generation. Their experience proved that decisions made that day would impact people, animals and the land, seven generations from then.

Neolin, a prophet from the Delaware Nation, spoke at council and convinced the gray heads the time for diplomacy was over. Council leaders understood the importance of building alliances, but decided it was time to act and time for their Chief to lead. Pontiac presented his plan of organized resistance combining all Native American Nations from Lake Superior to the Mississippi lowlands. Each tribe would seize their nearest fort, then join forces to wipe out the undefended settlements. Pontiac would sell the plan by traveling sending messengers to even the remotest villages. His men returned with pledges of allegiance.

The plan worked. By 1763 Native Americans had killed or captured more than 600 Europeans. Eight English forts fell out of 12 attacked. Whole garrisons were wiped out. Relief expeditions were repulsed and frontier settlements destroyed.

On May 7, 1793, Pontiac, with 40 leaders from allied bands arrived at Fort Detroit on the pretense of negotiating a treaty, with weapons hidden under their blankets. A flotilla of canoes edged toward Fort Detroit with warriors hidden under beaver pelts. Native women secreted weapons under blankets. Warriors played ball on a pasture field near the fort, ready to stop on signal to take up weapons.

But English Major Henry Gladwin learned of the plot when a Potawatomi woman involved with him begged him to leave the fort. Questioning her, he learned of Pontiac’s plans and armed his men. When the gates opened, Pontiac faced a line of soldiers with drawn muskets. He led his entourage inside with stoic dignity. He found armed officers in the council chamber. The shrewd leader acted indignant. He questioned why his English friends had met his peace overture with guns. Pontiac’s men watched his hand for a signal to draw their weapons. Like in a game of chess, Major Gladwin replied that the Chief had arrived during a scheduled military drill. Pontiac bluffed with an offer to bring his family to the Fort the next day to meet their English brothers.

At sunrise two teams of naked ballplayers appeared on the pasture near the fort—Potawatomi on one end and Ottawa on the other. The game was hard fought with crowing and loud cheering. The sport drew a crowd of natives, Englishmen and civilians from the settlement. After the spirited morning, the daring Chief appeared at the gate demanding entrance so tribal leaders could perform a peace dance. While some warriors scouted Fort Detroit, others danced. Pontiac explained to Gladwin that evil birds had whistled in his ears. He shouldn’t believe them because the English were his friends. Pontiac smoked the peace pipe with Gladwin and presented him with the calumet as a show of friendship.

The shrewd Chief’s warriors painted their bodies black on the first moonless night after the big game. Invisible warriors attacked Fort Detroit, confusing and frightening the soldiers and settlers. During the next three months that Pontiac’s forces held the English inside the fort, the Chief’s staged one surprise attack after another. Warriors vaulted over the walls with long poles. They sent a burning barge downstream to set fire to the fort’s supply ships. They intercepted ammunition and food coming up the Detroit River and pirated ships leaving for reinforcements.

Pontiac had daily challenges like every leader does—how to keep 900 warriors fed, and keep them from fading away during three months of holding the fort. Major Gladwin had to feed 2500 families and soldiers barricaded inside Fort Detroit. On July 31, 1763, Gladwin launched a surprise attack on Pontiac’s village, a decoy maneuver to allow his ships to sail for supplies and reinforcements. Pontiac learned of the attack, moved his village and hid his warriors in the forest by the old site. English soldiers suffered heavy casualties, yet the Battle of Bloody Run succeeded in providing Fort Detroit with reinforcements and supplies.

Warfare waged in the region was brutal with killings of prisoners and other atrocities. English officers attempted to turn the tide of the battle by infecting the besieging warriors and their families with small pox. They used infected blankets from their own sick soldiers to transmit the virus. They offered cash payments for the scalps of Pontiac’s warriors, their women and children.

The Chief had been assured the French would help take Fort Detroit. When he learned the pledge was false, his plan collapsed. He lifted the siege in October of 1763 and withdrew his troops to Illinois Country. Pontiac’s prestige ebbed after he stabbed Kaskaskia Chief Makalchinga during council, and the siege failed.

The Proclamation of 1763, a result of Pontiac’s Rebellion, shut down white settlements west of the Appalachians. It didn’t take long for colonists to ignore the Act and move into the Ohio valley. The Chief saw all he had accomplished undone. He signed a unilateral peace agreement with British Superintendent of Indian affairs, Sir William Johnson in 1766 in Oswego, New York. In exchange for a pardon, Johnson insisted Pontiac promise never again to wage war against the English. Resentment among native leaders surfaced when Pontiac claimed to have more power than he actually had. He was increasingly ostracized by his People, living peacefully on an island in Orchard Lake until 1768 when he was asked to leave by his tribesmen.

On April 20, 1769, while walking near Cahokia, a village near St. Louis, Missouri, Pontiac was bludgeoned from behind and then stabbed, allegedly by a Peoria warrior. Some accounts say he was assassinated by a French trapper paid by the English. Another says the nephew of Chief Makalchinga stabbed Pontiac to avenge his uncle. A war of reprisal was held against the Peoria Nation by Potawatomi tribesmen to avenge the life of Pontiac.

On April 27, 2013, I heard a direct descendant of Chief Pontiac’s speak at a dedication ceremony commemorating the council of tribal leaders Pontiac had called there. The event featured a number of First Americans prominent in literature, the entertainment industry, and in the business community. Ben Inman, Saginaw Chippewa leader and current interim director of the Seventh Generation Tribe from Mt. Pleasant, spoke.

Mr. Inman wondered aloud what Chief Pontiac would say if he were standing beside him as the sun set on what is now Michigan Historic Site # 728. He thought his grandfather would be concerned about young men of this generation. “When they walk into ceremonies do they know what their role is? Have my people lost the cultural teachings and beliefs I fought for?” Ben looked around at our group. “Our grandfather would be disappointed.”

Note—Laurice LaZebnik, a resident of Clark Lake, is the author of Strongheart, A Dog Who Was a Coward, available online @Amazon.com.
Read more @LauriceLaZebnik.com