How Pierce’s Bay Came to Be

I recently had the opportunity to look at two old title abstracts for property on Lake View (West) Drive. These abstracts were for the two lots owned by Eben ‘Dick’ Swain – my sister’s father-in-law. Within these abstracts, I was surprised to find the story of Pierce’s Bay.

Looking at the Columbia Township Plat book for 1911, you can see that there were eight platted sub-divisions identified on the lake at the time. From west to east these were :

While this plat map distorts the shape of the lake, it does provide a view of where to find the neighborhoods. 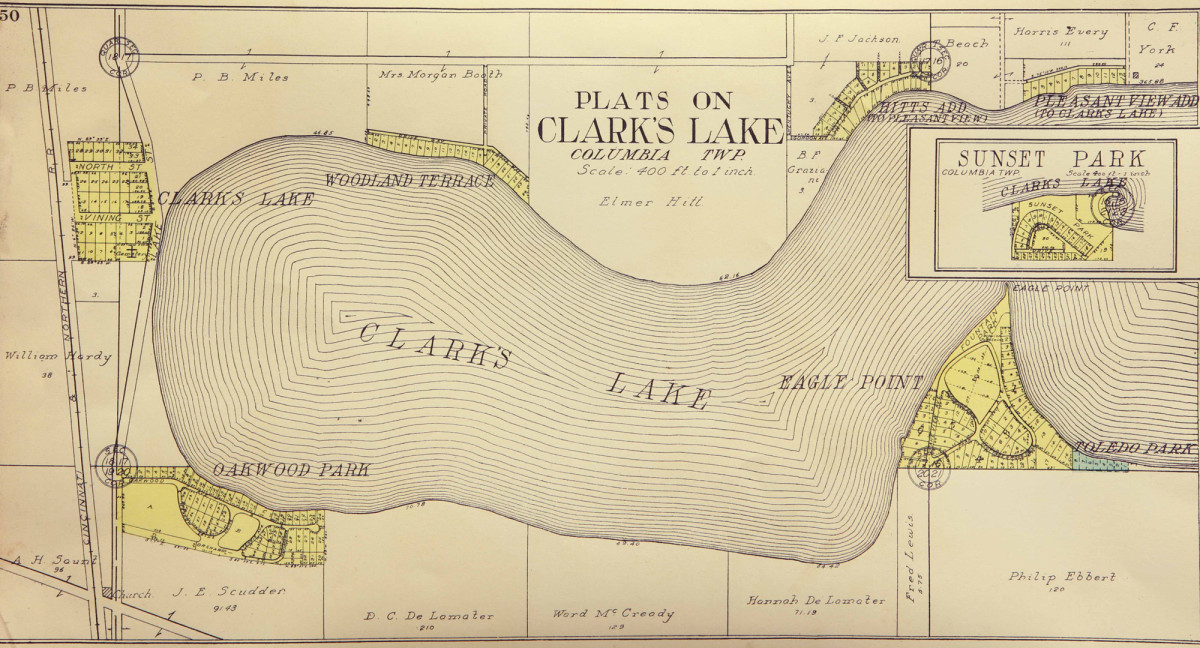 A short history of Sunset Park was recently provided in the article by Patti Boonstra.  You can read about a proposed addition to Sunset Park in the 1940’s by clicking here.  For Patti Boonstra’s My Clark Lake Story, click here.

Pierce’s Bay was not listed at the time the 1911 plat map was created. For many years I’d heard the term Pierce’s Bay, and generally thought of it as all, or a portion of it, of the bay between Eagle Point and Mud Point (sometimes known as Crary’s Point.) 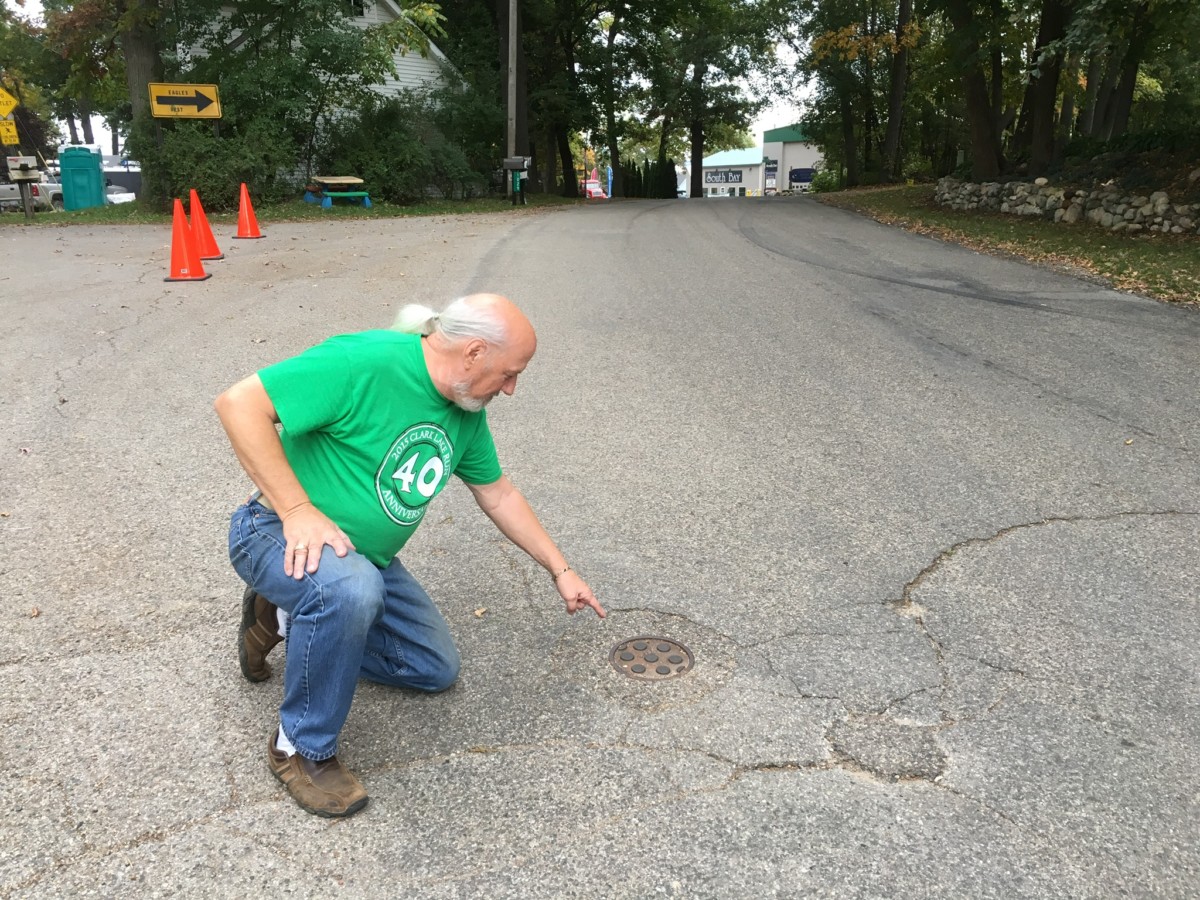 As described in an earlier article, Anson H. DeLamater, the second person to file for a homestead on Clark Lake, acquired the east half of the SE ¼ of Section 20 from the U.S. Government in 1835. This area covers an area running for ½ mile east from Eagle Point Road. The section corner is actual in the middle of the road behind  my house, where Eagle Point Road curves east to continue down the hill to the Pointe Bar and Grill (or in my youth to the Eagle Point Hotel.) This suggests the Point itself was not included in DeLamater’s holdings.

Anson DeLamater was very successful in his public life, but less so in his personal life. He unfortunately lost his first two wives. On October 22, 1888, he married for the third time. His new wife was Hannah Waite Pierce, widow of Harvey Pierce of Cohocton, NY. Genealogical information indicates she was probably the niece of his second wife, Lydia Parmenter, of that same town. As part of the marriage, DeLamater deeded the portion of his estate mentioned above to Hannah, conditional on her remaining with him for the remainder of his life. After Anson’s death, Hannah, arranged to transfer a portion of her estate to her son, Frank M. Pierce, by a land contract in 1906. This transfer was tied up for a while in probate as after Hannah’s death in 1916. The appropriate papers had not been filed and approved by the Township Board. After a few months of probate discussions, the transfer was approved. 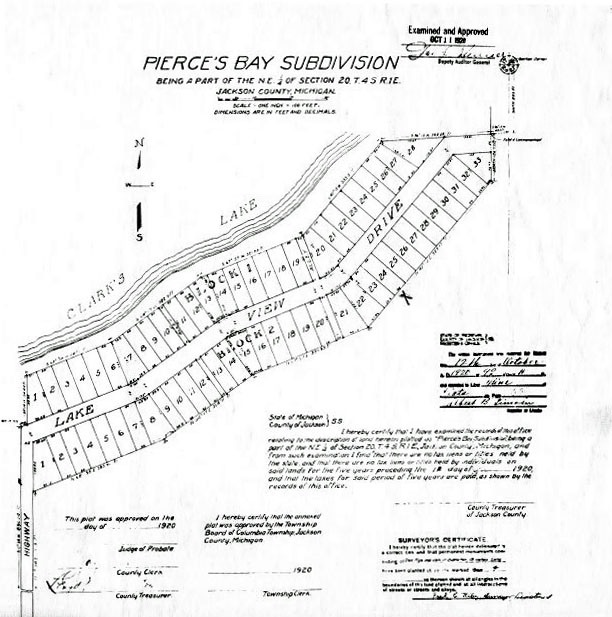 Then, in 1920, Frank, together with his wife Minnie Stahl Pierce and their neighbors Ward and Zoa McReady, filed a petition to crate a new subdivision known as “Pierce’s Bay” – consisting of two blocks. Block 1 held 26 lakefront lots, while block 2 held 33 back lots. The two blocks were divided by a road named Lake View Drive. The subdivision extended from the intersection of Lake View Drive and Eagle Point Road on the east, and west to the point where Lake View Drive turns south to intersect with Jefferson Road. 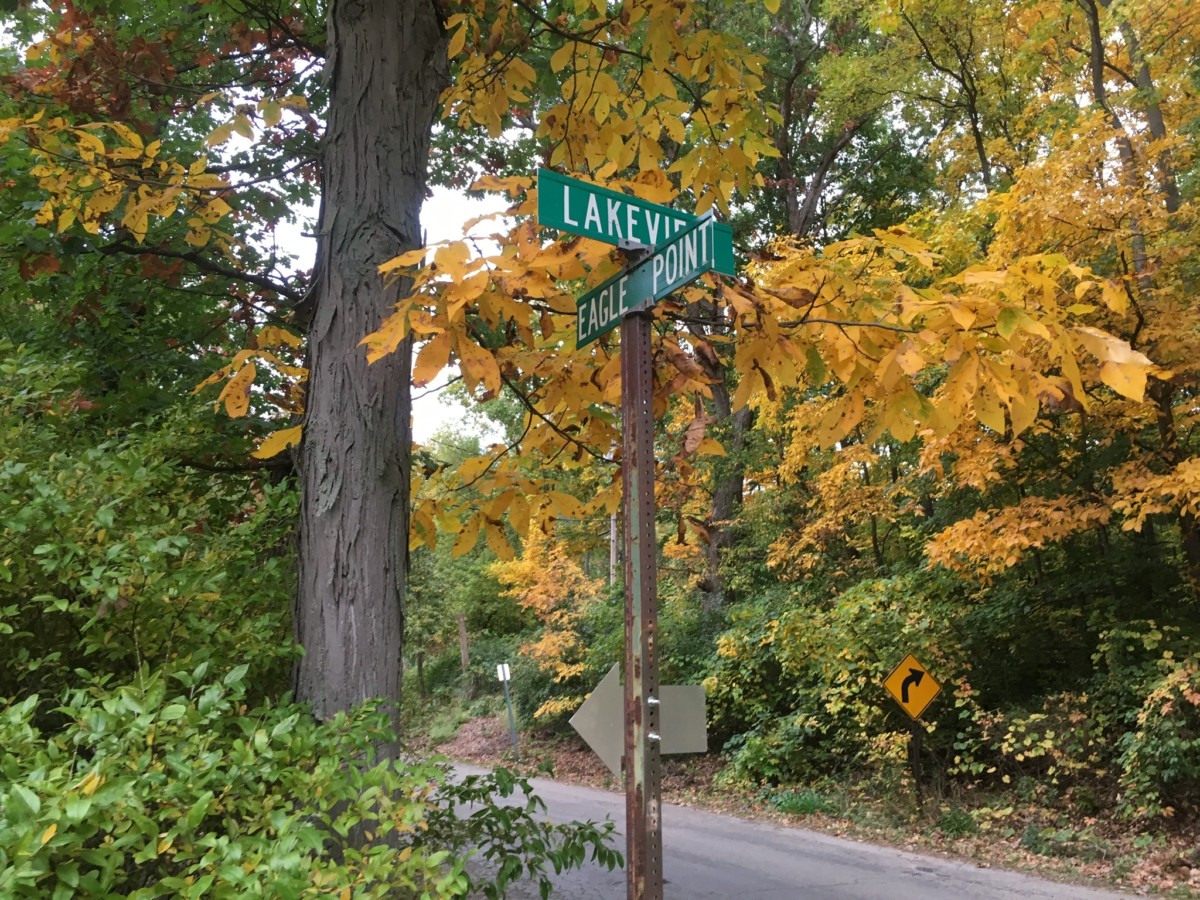 It is interesting to note, that these two roads, Eagle Point Road, and the southern extension of Lake View Drive were both established around this time as rights-of-way in two separate property transfers; the first of 1890, involving Hannah Pierce DeLamater and J. L. DeLamater, and the second of 1906 involving Hannah DeLamater and Frank M. Pierce. It is also interesting to note that an early first purchaser of lots in Pierce’s Bay, was Ruth and Leo Steinem. This was during the period when Leo was developing Ocean Beach and speculating in land around the lake. In the case of the Swain lot, the Steinem’s only owned it for one month.  During that time they appear to have drilled a water well and built a spring box around it for the communal use of as an undetermined number of neighbors, as of then. Although it is no longer there, I well remember that spring box along the shore, near the NE corner of the Swain lot.