Water level at Clark Lake has always been a topic of interest.  While the dam at Ocean Beach prevents dramatic drops, it’s rain, snow and Clark Lake’s many springs that replenish the lake.  In the last 70 years, one summer stands out for its low water level.  The cause, until now, has been a mystery.

No official lake-level database exists.  But long term Clark Lakers have learned to eyeball changes by measuring depth changes against dock pieces. Of course, the dock pieces must remain in the same place and be the same size to ensure the validity of this method.  Photographic evidence also helps support anecdotal recollections.

One such dock exists at 1016 Eagle Point Road, belonging to the Ligibel family.  The same horses support the dock in the same positions every year.  The owner confirms when horses were replaced, the new ones measured the same as the old ones (for the dock sections in question).

Below are four photos—two from 1953 and two taken just days ago (fall 2020).  In the first set, compare the large beach then to the smaller beach today. 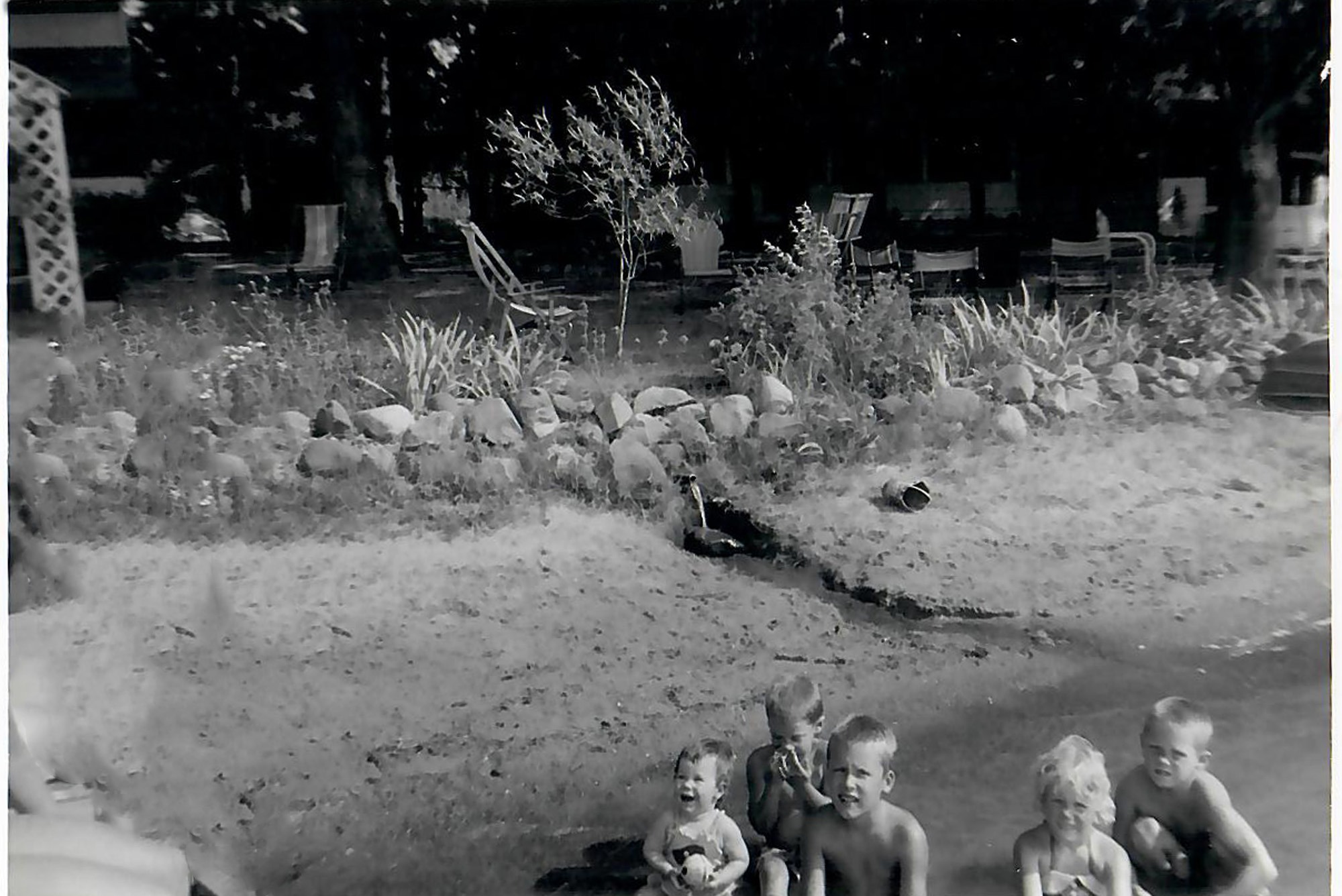 Compare the same scene today, and notice how close the water line is to the spring.  Garden growth has covered some of the sand, but the spring hasn’t moved and serves as a reliable marker. 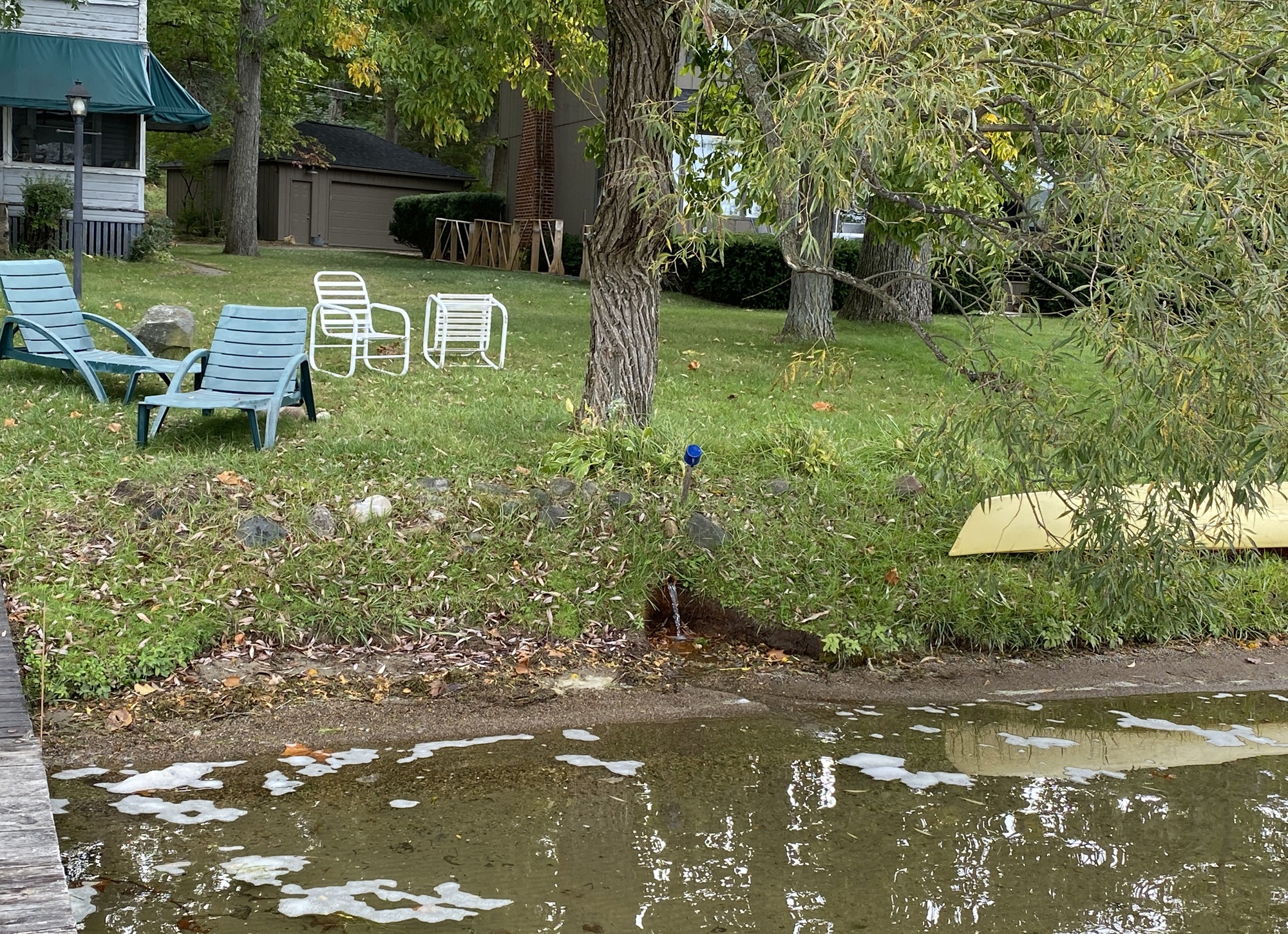 In 1953, not only did Ligibel’s beach expand, small islands emerged in shallow areas like Pierces Bay and in front of what is now the Township Park.

Another comparison illustrates the dramatic difference.  The first dock horse in 1953 is completely out of the water.  Not so, today. 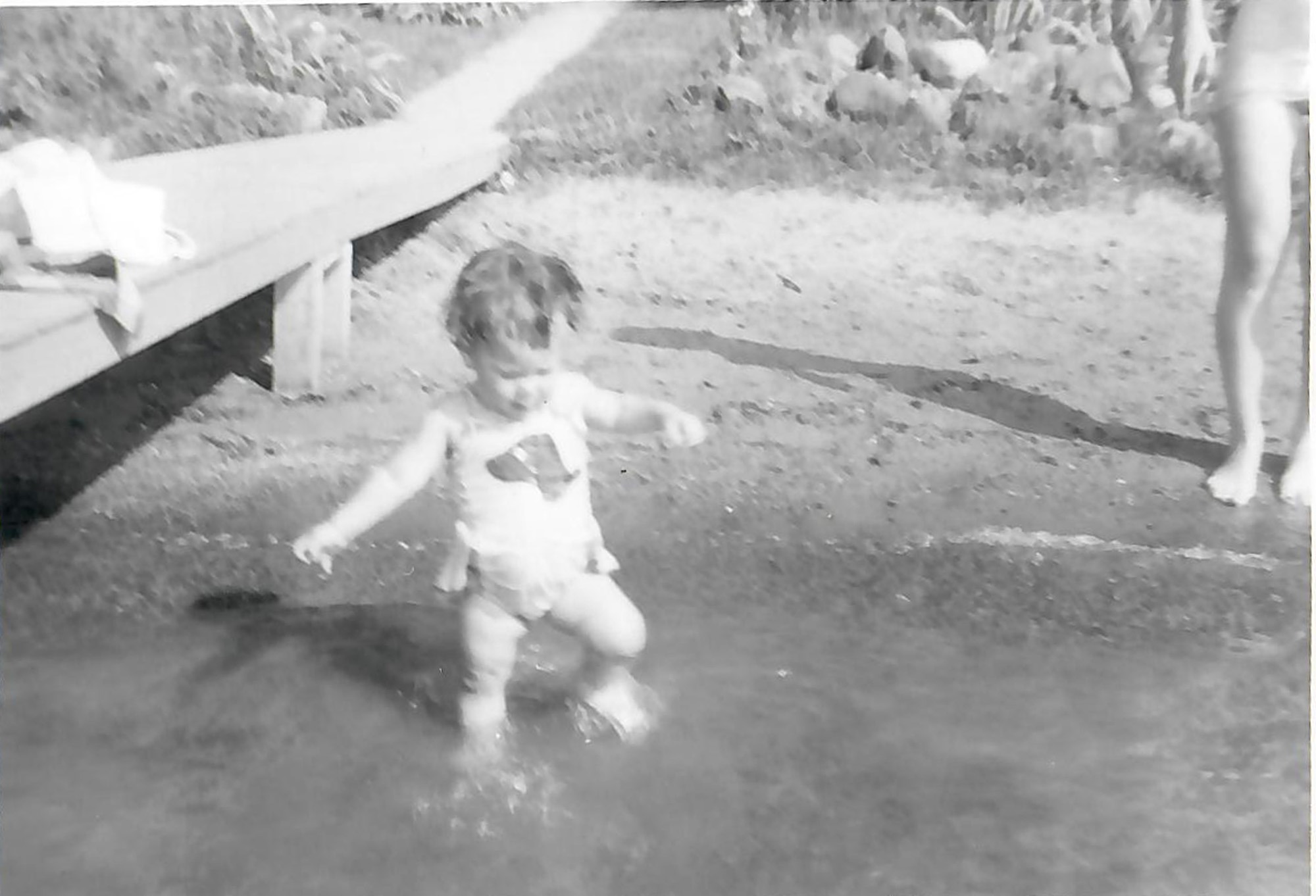 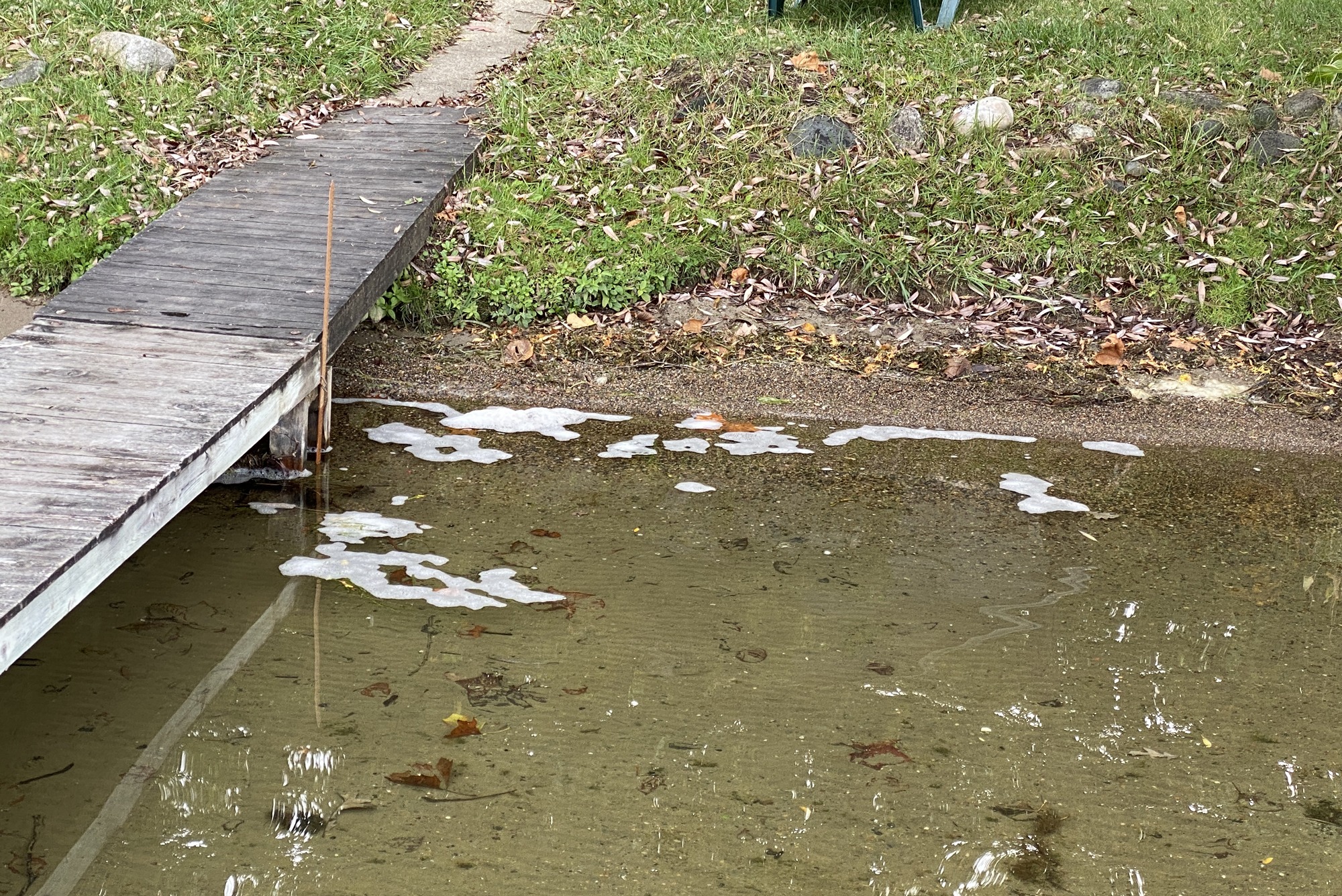 As you can see, water amply covers the horse. The difference can be measured.  Today the depth of water at the first horse is 5 1/2 inches, in 1953, zero.  The second horse, not pictured, is at 12 1/2 inches.  During at least one summer, probably 1953, the second horse was nearly out of the water, also.

So, what caused this significant difference in water level?  Perhaps a drought?  Aliens draining the lake?

A Sunday, February 7, 1954 article in the Jackson Citizen Patriot sheds light on the mystery by taking you to the dam.  The article reports “…in addition to the waters which usually tumble over the spillway…much  more water was escaping from under the dam.”  The Road Commission’s Leslie Reed was quoted as saying “the lake could have been lowered by 7 feet…”.  Emergency measures included sandbagging and the installation of steel reinforcements driven down “10 to 12 feet” to staunch the under-the-dam flow.

Does this solve the mystery of low water levels in 1953?  A piece of the puzzle, perhaps.  In advance of the 1954 crisis, water flow under the dam had likely increased over time, gradually lowering the whole lake.  The issue was probably undetected at the dam, but surely those using the lake noticed. However, at the time, nearly all were at the lake for summers-only, and they may have chalked it up to lack of rain. 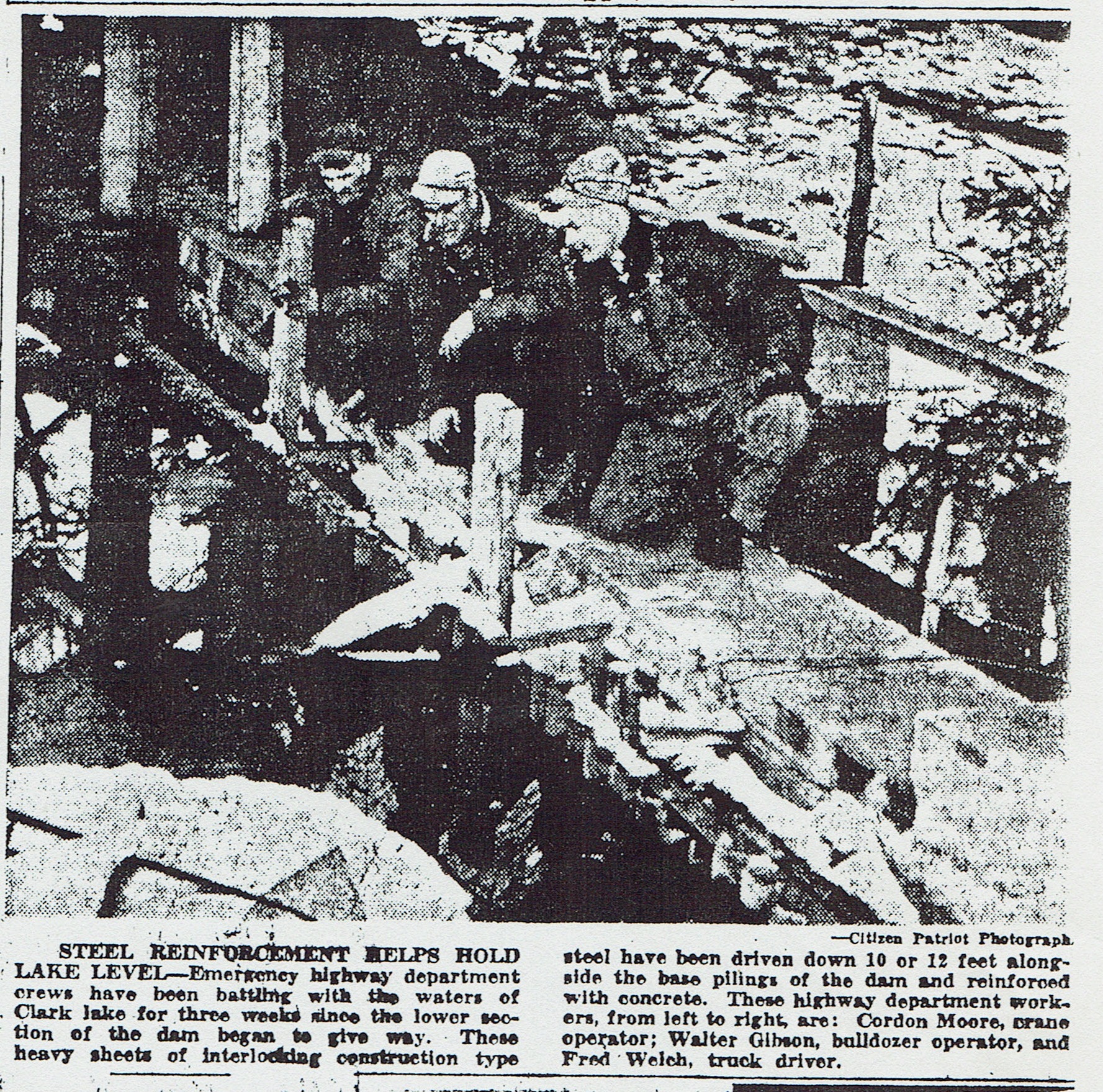 The 1954 Cit Pat article comes courtesy of Ted Ligibel, who wrote the book “Clark Lake, Images of a Michigan Tradition.”

Precipitation was measured at Jackson’s Reynolds Field, not Clark Lake.  But the Jackson numbers lead us to a reasonable conclusion.  Clark Lake was hit by a double whammy in 1953—a dry year, and a leaky dam that was headed to its 1954 disaster.

Thanks to Jackson District Library researcher Tim Frusti for providing the precipitation data.  The numbers did not pop up on a simple Google search, and Tim drilled deep until he hit water.  This website now makes this database available to anyone by going to Vital Statistics under General Info tab.

The 1954 dam crisis is not the only in Clark Lake’s history.  Twice, since 2012, leakage around both north and south shoulders threatened the integrity of the dam.  Due to seasonal freezing and thawing, infrastructure weakened, allowing water to carve crevices around it. Being true to its mission of Standing Up for Clark Lake, the Clark Lake Spirit Foundation initiated the Dam Strong project.  The results made possible a complete upgrade of the area surrounding the dam.   Roots of brush and trees were eliminated, the shoulders were reconstructed, a new concrete deck was poured around the dam, guardrails were installed, and four Spirit Trail benches were placed on newly landscaped turf.  Through contributions to Dam Strong, and a massive effort among a few, bad news turned into good, at a time when other help was not coming our way.  Clark Lakers rose to the challenge.

Next, watch a timeline of the 2018 dam repairs. 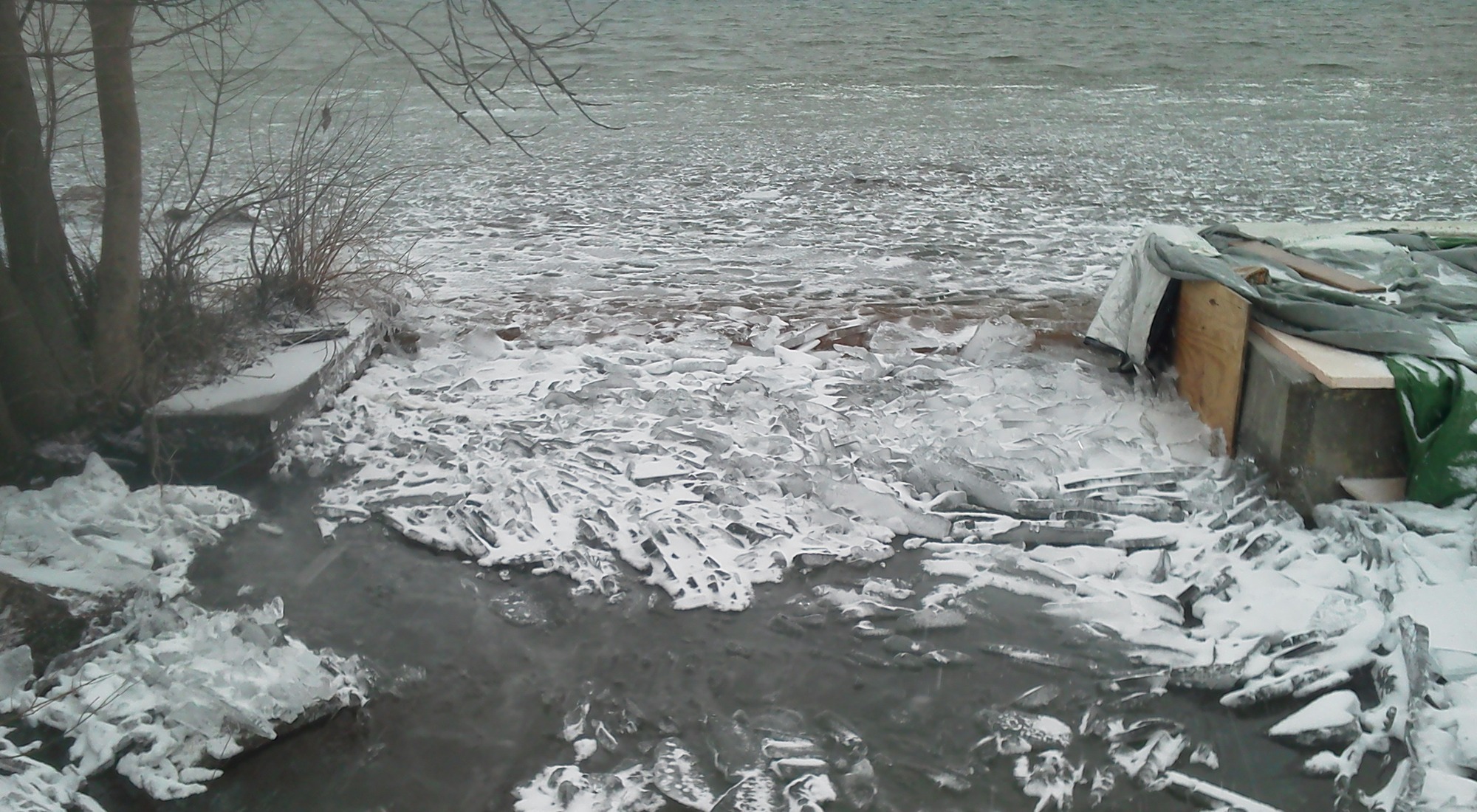 Story and videos by Rick Belcher