In her story of the Graziani family’s discovery of Clark’s Lake and the history of the family at Kentucky point, Carlotta Graziani Wilson tells that the family came to Clark’s Lake in July 1896 to spend the summer at the Pleasant View hotel. However, there is some evidence that Benjamin Graziani, her father, probably made a trip to Clark’s Lake earlier to arrange for the summer rental with the owner of the Pleasant View hotel, Tom Beech.

Imagine if you will that Mr. Graziani leaves the train at the west end of Vining Street, his first visit to our wonderful community. The railroad and train station are just one year old. He can see the lake from the train station and walks slowly toward the shore. Where is the hotel? How does he get to the hotel? As he walks he sees a sign on one of the houses reading “Justice of the Peace” and Post Office. Clearly here is someone who can answer his questions.

Here is a picture of the Miller Brothers store and the post office. The post office is the building located directly behind the store and was owned by Jay Delano Reed.

The Justice of the Peace Jay D. Reed (my great uncle) had only recently been appointed as the postmaster of Clark’s Lake on April 25, 1896. In one of the narratives describing the Graziani family at Clark’s Lake Mr. Graziani states that “the lake was as beautiful as Mr. Reed said it was.”

Here is what the original Clark’s Lake Post Office looks like now. You can see the I.O.O.F. building, currently being renovated, to the right. 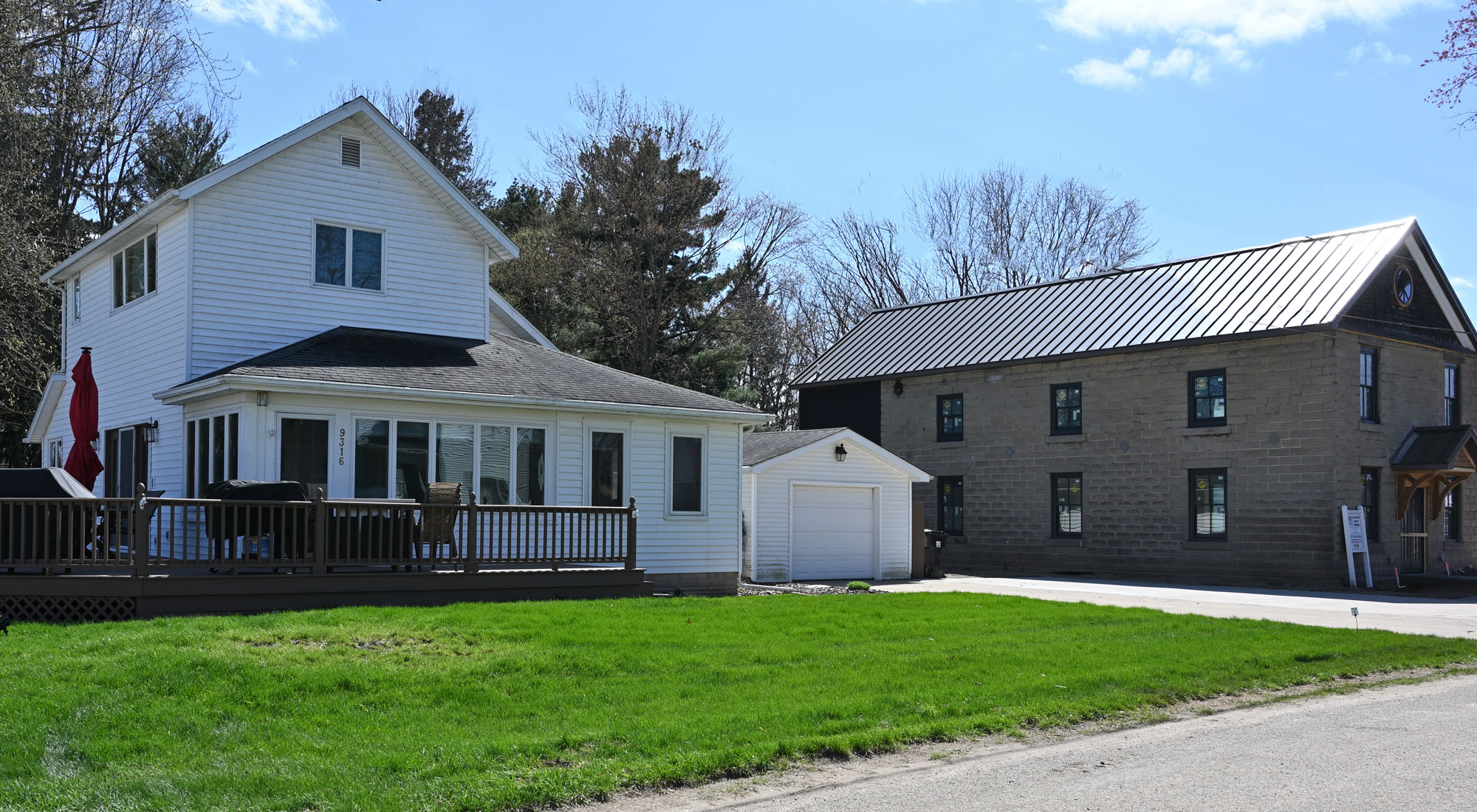 The original house was moved back from Vining Street over a basement when “central heating” was installed into the home. The porch was added and a room added to be the “Post Office”.

Since mail was not delivered in 1896, those who wanted to know if they had mail had to come to this house, walk onto the porch through the porch entrance, turn to the right, and go to the Dutch door located on the west end of the porch (see the small room on the right?) knock and the postmaster (or his wife Aunt Franc) would open the top door and hand you the mail. Jay D. Reed served as the Clark’s Lake postmaster until 1899.

No post office until 1896—how did folks get mail before that year? 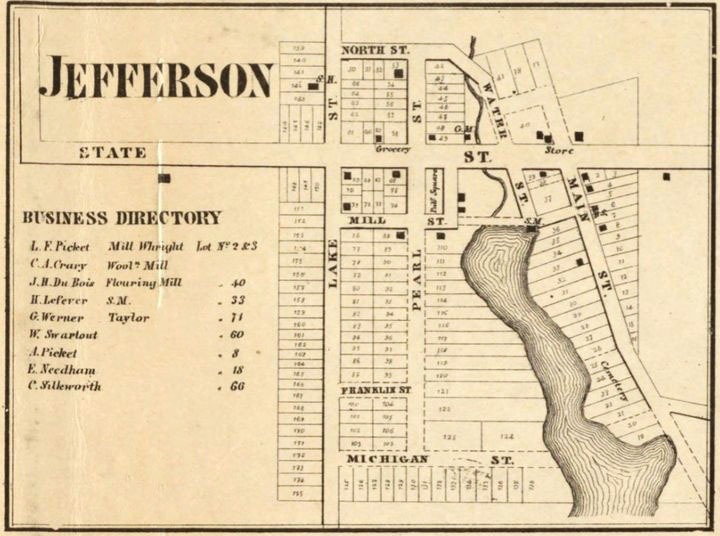 A letter sent to my great-great grandfather (father of Jay D.) postdated 1884 was addressed to James Reed, Columbia, Michigan. The closest post office in 1884 was located in Jefferson village. I am not sure whether my great-great grandfather had to go Jefferson to get the letter or whether a friend was able to pick it up and bring it to him.  Although people who lived in cities had mail delivered to their homes, rural free delivery (RFD) did not start until 1902. 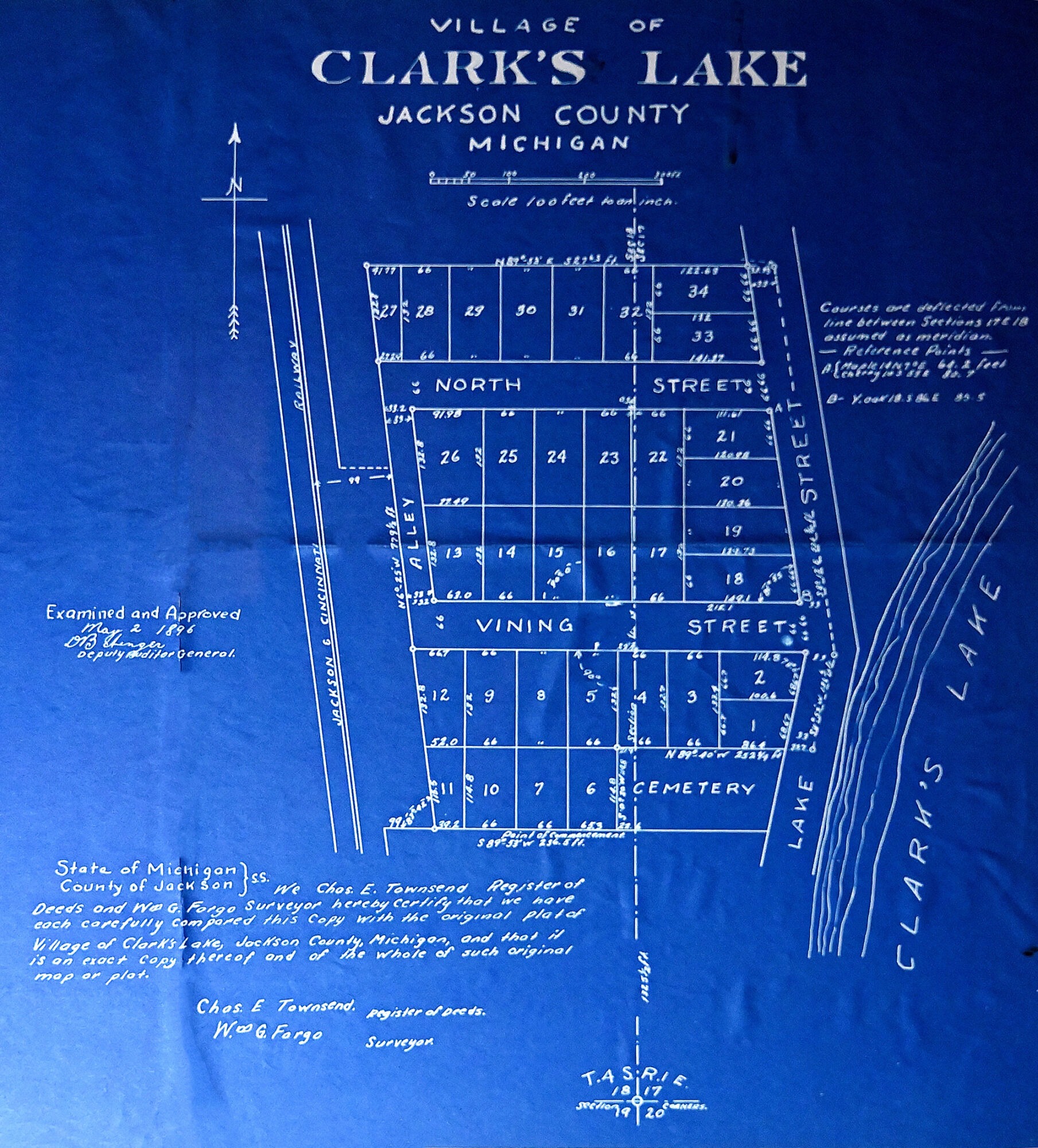 But now, Clark’s Lake had a post office, and it was located in the newly designated “Unincorporated Village of Clark’s Lake”. Why did we need an unincorporated village? Because Clark’s Lake is not a village, township or city. It is a lake!  We needed an address.

To establish a mailing address, Mr. Vining agreed to allow the citizens of Clark’s Lake to turn much of his property into a village.  It became an unincorporated village because there would be no governing of the citizens by elected or appointed village officials. The village is defined as the properties between North Street and Finch Street, bounded on the west by the railroad and on the east by the shore of the lake. The “Village of Clark’s Lake” was approved on May 2, 1896. One week earlier, a postmaster had been appointed by the Federal Government.

Most of the 1,400 folks receiving mail with a Clarklake address today clearly don’t live in the village of Clarklake.

The new postmaster, Jay D. Reed, actually lived in the house that he had built for his bride in 1874 on the corner of Reed Road and Hyde Road (where I now live). He had provided funds to help build the Miller Brother’s grocery store at the corner of Hyde Road and Vining Street. But this house, the first home he shared with his wife Mary Franc Preston Reed (married 1868), had become his Justice of the Peace office and now the village post office.

Later, my grandfather and my grandmother who had been living in the apartment over Miller’s Grocery, moved into the home that housed the post office, and Uncle Jay began to conduct his Justice of the Peace business from his home on Reed Road.  The history of the Clarklake Post Office also shows that in 1927 my grandfather G. Ray Reed became postmaster and served until 1933.

The home remained in the Reed family until 1995 when the house was sold to Dennis Hurst.

When I was young the house still had a small barn located behind the house that backed up to the cemetery fence. In can be seen above to the left side of the Miller’s store. The small barn was an 1800’s one-horse garage. There was a second story loft for hay for the horse. The ground floor had a tack room for harnesses and grain and a stall for the horse. Uncle Jay provided a comfortable parking spot for his horse while he conducted business in the village.

Ice cut from the lake was stored in a small building that preserved it well into the spring and often early summer. Sawdust from cutting firewood was used to keep the several layers of ice from becoming one big block. That building became a family chicken coop here at the Reed farmhouse.

Mail was initially delivered by the train. In the early 1900’s trains arrived in both directions at least twice a day. A mail sack was thrown off and one was put onto the train. The postmaster had to bring the mail from the train station and sort it at the post office. Later, when the train no longer stopped at Clark Lake, I was told a mail sack would be hung near the tracks and a hook would snatch the sack as another was thrown from the train. Mail was actually sorted on the train as it moved from village to village.

Clark Lake was no longer a stop by 1940 (and probably much earlier).  Many more families lived in the Clarklake delivery area. Mail delivered in a sack had to be sorted and packaged for delivery. The train station was no longer being used for passengers. The government needed a new post office and the railroad needed revenue. 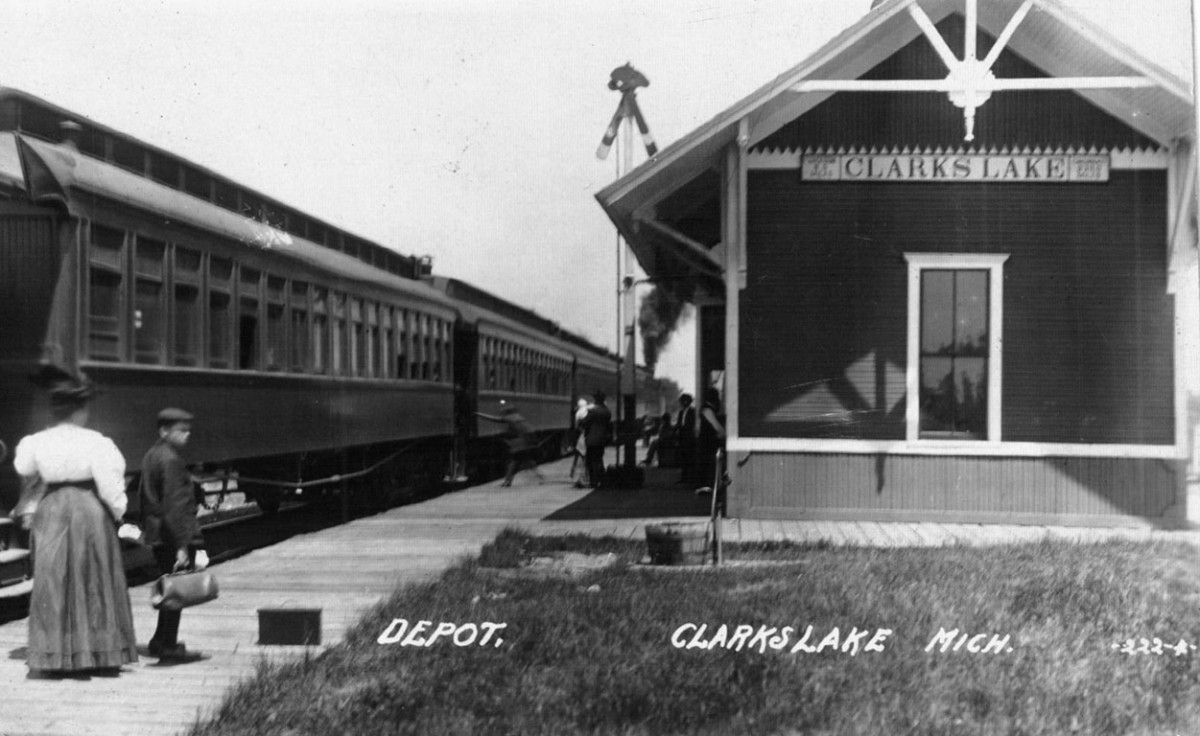 My father continued to carry the mail until he retired in 1977. Since he always read postcards from folks who were in Florida or on vacation, he would often find a card that had “Hi Marion” written at the bottom. Your mail carrier knew more about you than your friends!

Later, as the train station became “long in the tooth” and the railroad no longer wanted to maintain the building, the United States Postal Service requested bids for a new postal facility.

Harold “Hop” Anderson (then owner/operator of the Lakeside Grocery) offered the new addition on his building that became the new home of the Clarklake Post Office in 1955. During my college Christmas break in 1958, I was hired by the Clarklake Post Office to help carry mail bags and assist with sorting Christmas mail and packages. I suspect my father had something to do with my hire?

In 1965 the USPS requested bids for a new and more modern postal facility. This time Monford Roberts (Roberts Grocery, now Doyle’s Market) stepped up and built a new store that included space for the post office which now services our community.

The Reed family involvement in Clarklake postal service ended when my sister-in-law, Gretchen Reed was medically retired from her position as one of the relief mail carriers in 2011. Many residents still remember Gretchen as their friendly postal carrier here at Clark Lake.

There is no longer a postmaster in the Clarklake Post Office. A manager now handles business in our post office. Mail that used to be delivered in bulk and sorted by our mail carrier is now sorted and packaged in Jackson and Lansing. The days of mail being delivered to the correct Clarklake person, by a postal carrier familiar with the families on their route regardless of incorrect address, are no longer.

As postal service grows, changes and automates, we must wonder whether our small post office will survive?

NOTE: Before 1963 and ZIP codes, the postal service decided that we would be Clarklake to ensure that the other Clark Lake in Michigan would not receive our mail.  The map below shows Michigan’s other Clark Lake, located in the Upper Peninsula. 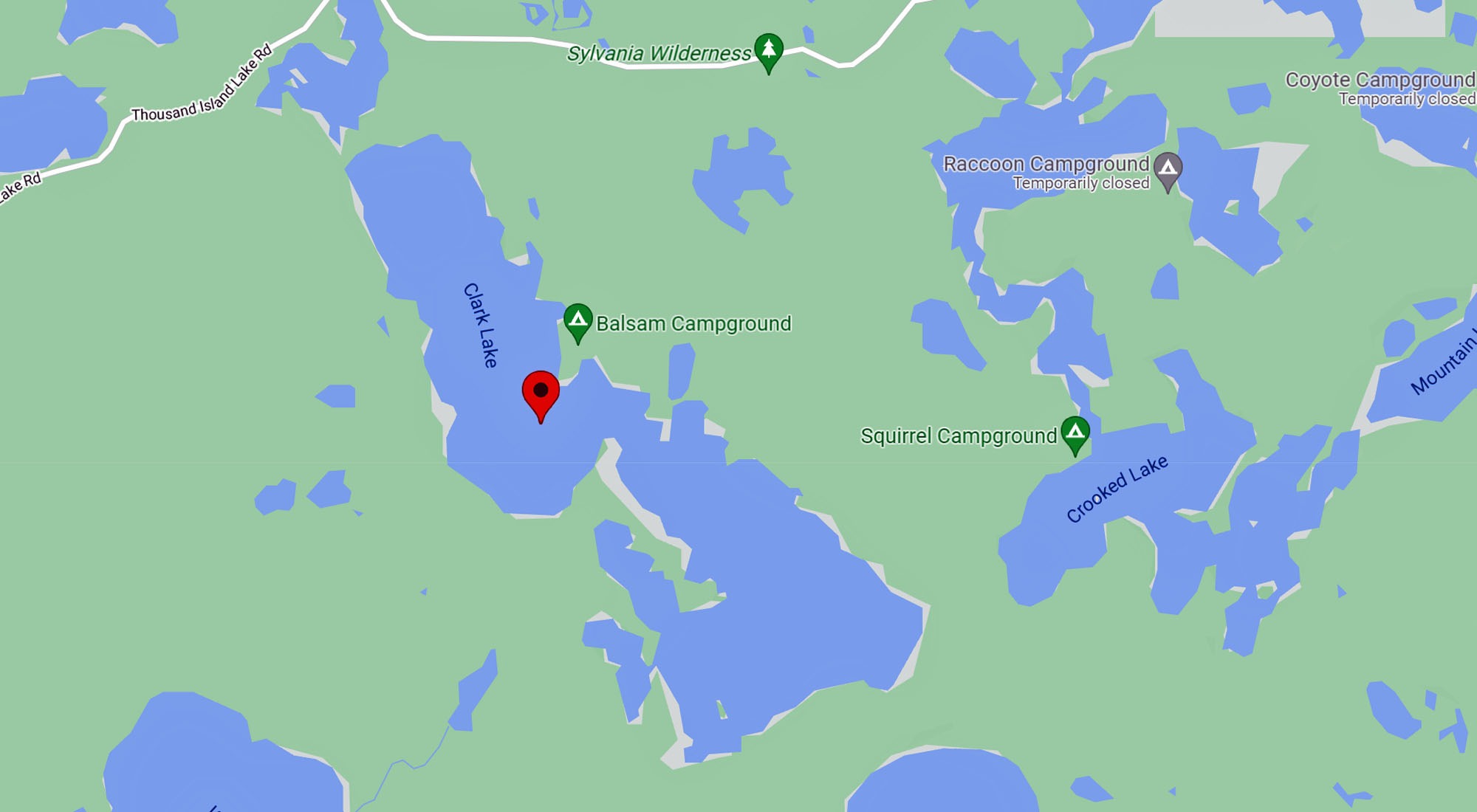