In Clark Lake’s storied history, there is a short, but grand, episode—and it originated in Pennsylvania. This is the story of Chauncey York and Clark Lake’s Ma-Le-Na Park. 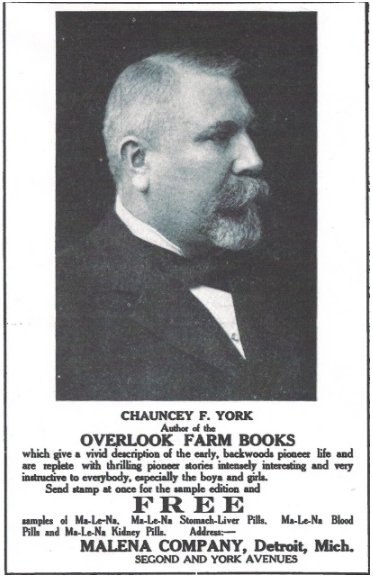 Born in New York City in 1850, Chauncey F. York graduated from Penn State University in 1876, and settled in Warriors Mark, about 20 miles from the University. This small town of Warriors Mark (population 1,796 in 2010) has an interesting history. It was originally named for the Warriors Path, an ancient Indian path that predated the English Colonists, similar to our nearby Sauk Trail (see my article published here in 2014). The Warriors Path was regularly used by Iroquois warriors traveling from New York State to North Carolina, usually to do battle with their enemies of the Catawba Nation. At times it was also called the Catawba Path, and the Tuscarora Path, the later recognizing the last of the six nations to join the Iroquois Confederacy in 1722.

Following the death of his first wife in 1893, Chauncey married his second wife, Jessma Noll, who was 24 years younger at the time of their marriage. In 1899, during the Spanish-America War, Chauncey organized The Malena Company in Warriors Mark. His Company specialized in medicines, such as Ma-Le-Na Stomach-Liver Pills, and the Malena ointment and salve, as well as various soaps and a restorative chewing gum called Gu-Ma Gum. Chauncey bought a cottage on the North Shore of Clark’s Lake in 1908, and moved his company to Detroit two years later, in 1910. About this time Chauncey retired, as a reputed millionaire, and his son Harry took over the business.

Dr. J. L. Mitchell had originally built the Clark’s Lake cottage some years earlier. Chauncey remodeled and enlarged it, naming it the Ma-Le-Na Castle after his company. It was situated on the north shore, across the lake from Eagle Point but a bit further east, about half-way to the present day Beach and Boat Club. He had great plans for the immediate area, developing it as something of a park, with walks and riding trails in addition to its working farm. He even marked out the name Ma-Le-Na Park in white chalk letters on the bank of the lake for all to see. In retirement, Chauncey became an author and was publisher of a book of stories entitled “Overland Farm Books.” He claimed that these stories gave a vivid description of pioneer life…. interesting and instructive, to everyone, especially boys and girls.

Chauncey and Jessma were very popular while they were at the lake, frequently holding events for their guests and neighbors. While at the lake, the couple had a son whom they named Carlton Noll York. Carlton died in 1917, aged 11 years, from complications due to appendicitis. The couple sold their lake house in 1920. One article indicates he sold the property to the Township to be used as a park. He then moved to Tarpon Springs, Florida, where he died in 1926, at the age of 77.  He was buried in Brooklyn, Michigan’s Highland Cemetery where he now rests beside his son, Carlton. Jessma later returned to Pennsylvania, living there until 1955. The property eventually ended up in the hands of Floyd Avis, who developed the Avis Orchards on the North Shore of the Lake. York Road on the North Shore of the lake, the successor to Ma-Le-Na Drive, still bears his name. Today, Ma-Le-Na Park is occasionally remembered by the handful of old post cards that occasionally turn up, and an article in Ted Ligibel’s 1991 book, “Clark Lake, Images of a Michigan Tradition.”