Clark Lake’s Crime of the Century

Through the decades, Clark Lake has had many adoring fans.  Some showed their love of the lake by painting it.

To follow the pedigree of one of these paintings, you will need to know its backstory.  Flip and Linda Reynolds have a long history at Clark Lake.  For many years, Flip’s grandparents, Herbert and Betsy Reynolds, owned the cottage at 1900 Q Lane.  It was there that a very special painting had its birth.

It was summer 1932, and the Reynolds invited a special guest, an artist, to stay with them.  Inspired by all she was seeing, she assembled her supplies and sat down in front of a blank canvas.  As many artists do, she began to create her own version of what she saw.  Clark Lake would have a bi-plane delivering airmail.  A Loch Ness type serpent would be seen at the tip of Kentucky Point swimming toward the head-of-the-lake.  Not just any serpent, our Nessie was like the story your uncle told about the fish that got away.  Larger than life.  Of course, the main sights would be included–Pleasant View, Ocean Beach, boats on the lake, C.B. Hayes cottage and barns.  A train would chug along the tracks paralleling Hyde Road.  And was it the train that delivered her to the lake for her visit to the Reynolds?  When she finished the artwork, the Reynolds hung it in a place of honor in the living room.  The photo of the painting is below.  But this is not where the story ends. 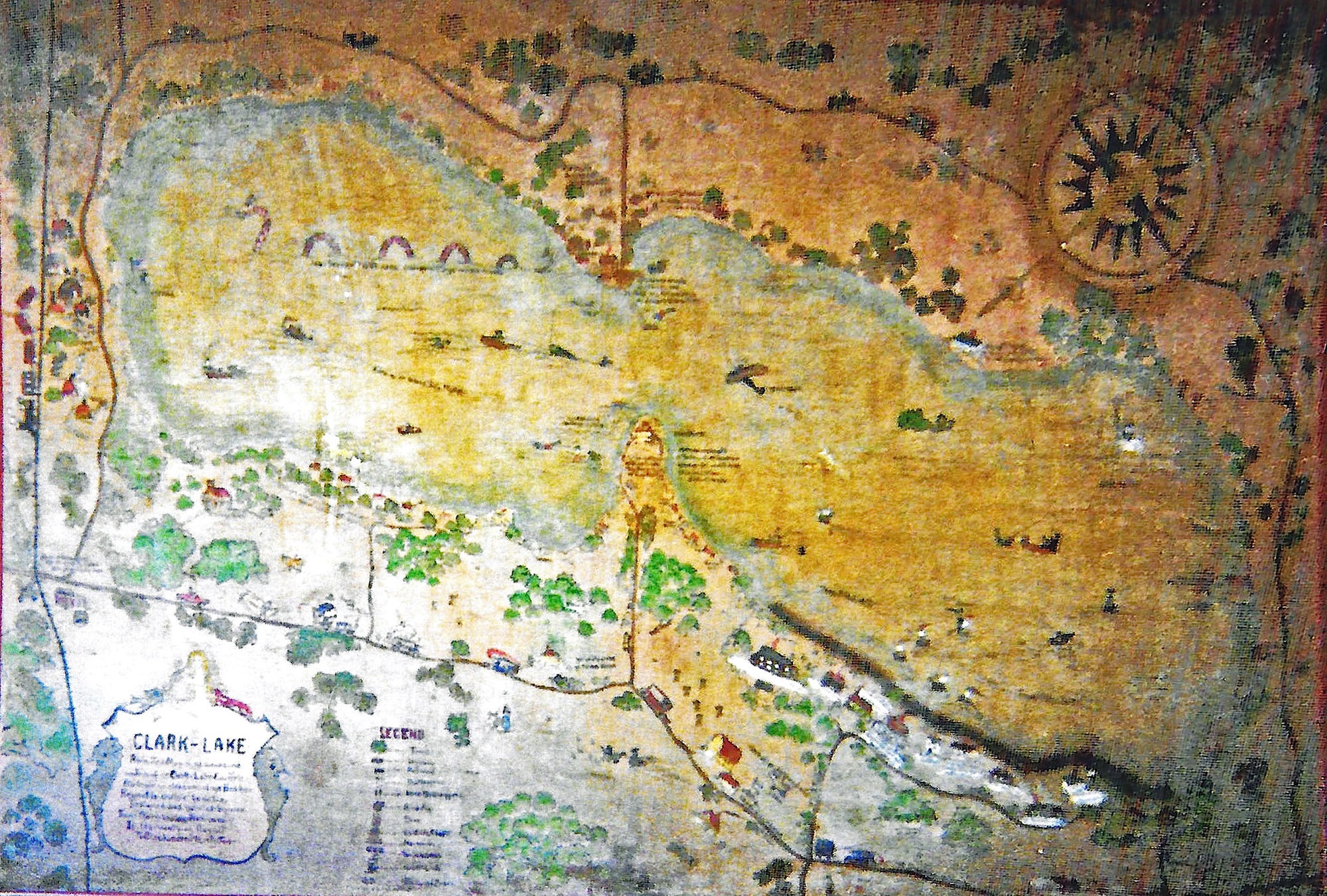 This is the only photo of this painting known to exist, preserved in Linda Reynolds’ collection.  Before several hours of recent work to restore the photo, it looked very much like the photo was taken as an afterthought.  Why spend a lot of time photographing something if you could look at the original anytime?  The photo was taken at an angle, and even with most careful use of Photoshop and Corel Aftershot, many of the details are still obscure.

So, where is the painting today?  That remains a mystery–the result of Clark Lake’s crime of the century.

In 2001 the Reynolds family sold the Q Lane property to Bob and Jill Lajdziak.  The Reynolds had razed the cottage, and the Lajdziak’s built a new home on the lot.

The painting had hung on the same east wall of the cottage since 1932.  Desiring to share it with the lake, Flip and Linda Reynolds put it on loan for display at the Clark Lake Community Center.  The Center, itself an icon, preserves Clark Lake’s past.  So, what a perfect place for the painting.  To protect it, the Reynolds had it mounted on a plywood base, covered in Lexan (clear plastic stronger than Plexiglass) and encased in an aluminum frame. The painting was secured on the east wall of the second story hallway near the stairwell.  On August 2, 2006, a person or persons broke into the Community Center and cut the painting out of its frame.  Left behind were the remnants of the frame and plywood.  It’s possible the painting was destroyed.  Or was it?  A few small pieces of the painting were found at the scene, but most was gone. The painting has never emerged. The only evidence that it ever existed is the photo you see above.

To say this is a cold case is an understatement.  Unlike TV crime shows, the forensics, including dusting for fingerprints, did not lead to the guilty, nor enable a recovery.  Several questions to ponder. If you love Clark Lake enough to steal this painting, how could you equate that love of the lake to depriving others from seeing it?  Then there is this.  If someone stole the Mona Lisa from the Louvre, what could he do with it?  Show it to friends?  Probably not.  It would be so hot that anyone learning of its new owner would eventually talk.  Or was this just a terrible act of vandalism?

Today the painting remains missing.  Do you have any information that would lead to its recovery?  Or if you, or someone you know, has it, would you be willing to return it with no questions asked?  Please leave any leads in the comment section below.

Note:  This is not the first or last time someone would create their own vision of Clark Lake in oils or water colors. More is on the way.  Stay tuned!