A Painting with a Story

Paintings have their own history, even if they stubbornly refuse to reveal it.

This is another story that starts with someone painting his or her vision of Clark Lake.  The painting’s origin and its story before I came in possession of it may remain a mystery.  But I can tell you about the chapter I shared with it.

This watercolor depicts Eagle Point before I was born.  The artist prominently displayed the hotel, the dock with boats tied to it, a boat on the east side of the point and two cottages in the cove.  What’s missing?  The pavilion that served various functions during its lifetime.  At times, it hosted a dance hall, roller skating rink, and a playhouse on its second floor.  Depending on the decade, you could find a bowling alley, restaurant, boat storage and repair on the ground floor.

We’ll never know the name of the artist and why he or she chose not to include the pavilion.  It could be that it didn’t exist at the time.  It may predate Rollo Every’s ownership and the pavilion he built.  During Rollo’s era, additional buildings led to the pavilion.  They served those who came to Eagle Point to vacation for the day or week. 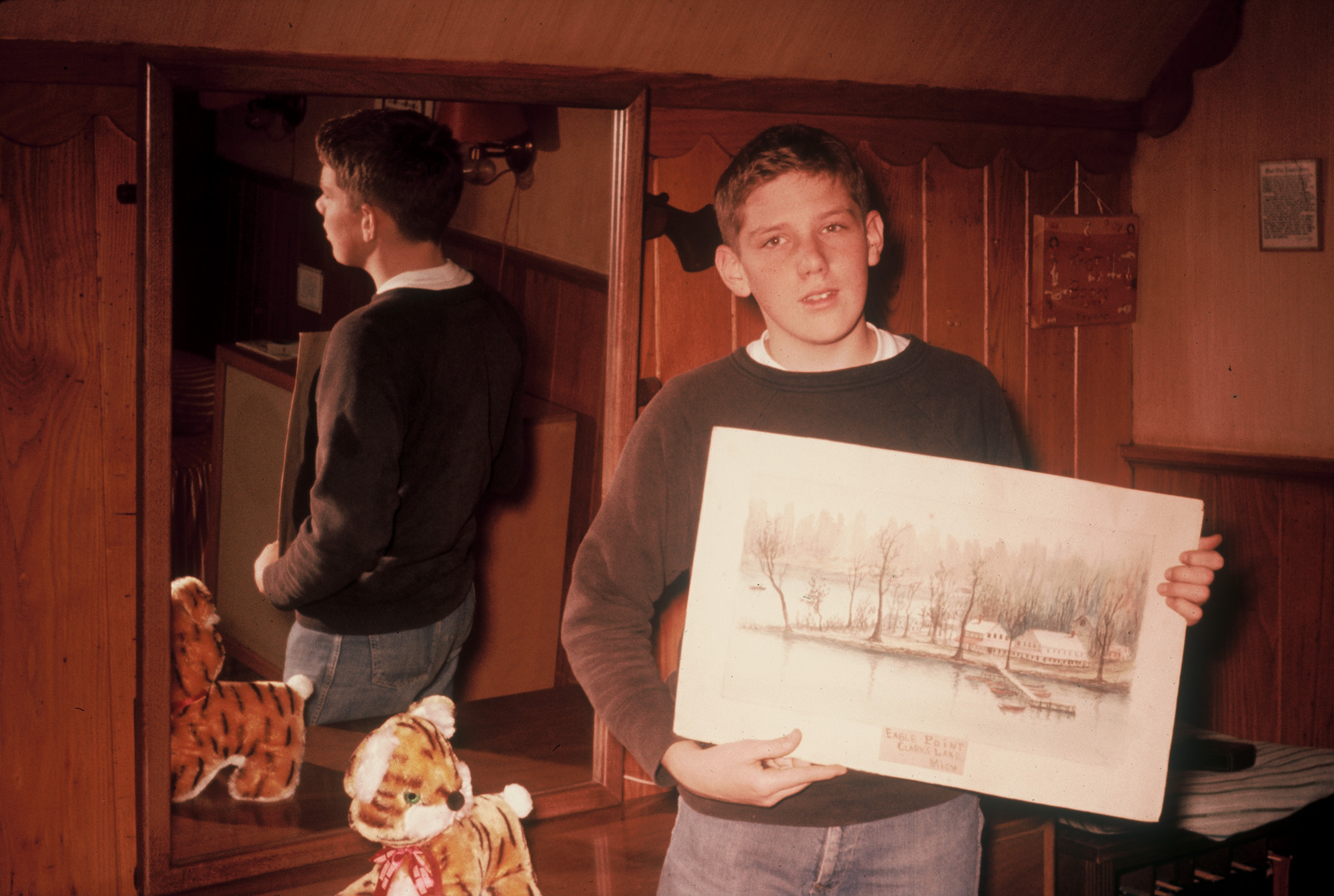 Why was I entranced by this painting?  Growing up, Eagle Point fascinated me.  It became indelibly imprinted on my life.

Just several cottages north of ours, Eagle Point held the mystery of the “olden days.”  What stories were hidden in the roller rink’s antique arcade games, the old wooden Chris Crafts in the marina boat storage—and  the hotel, restaurant, and Bill’s store? And what was concealed in Rollo Every’s then-shuttered buildings that lined the walkway to the pavilion? Beyond its historical secrets, Eagle Point was the epicenter for lake kids. It was where you reached beyond your neighborhood, and hung out with kids from all over the lake.  That’s what it was like in the late 1950s and during the 60s.

At a garage sale, someone in my family rescued this water color that I’m holding in the photo. At the end of one summer, I took it from the cottage and hung it on my bedroom wall in our Old Orchard home. During Toledo’s cold winter months, it was a warm and friendly reminder of what was ahead when summer returned. It occurred to me that this painting should be preserved somehow. I asked my father to take a color photo of it with his Argus C3. “Just the painting, dad.” “No, Rick, you hold it and you’ll be in it, too.” Like many encounters with dad, he won. He decided the tiger, mascot of DeVilbiss High School where I went, should be part of it.  “Stand in front of the mirror, Rick.”  Dad did have an eye for composition.

After graduation, life changed. College took me to Pennsylvania.  Then the U.S. Army took me to New Jersey and Colorado.  Once out of the Army, my career in radio took me from WIBM in Jackson to places all over the country.  Before those moves, I had returned the watercolor to the family cottage at the lake. That’s where I thought it belonged.

I was in Dallas having jingles sung for my radio station.  Before leaving for the studio session, I received a message from the hotel front desk–call Dr. Roger Lyons at his office. The Lyons’ cottage was near ours at the lake.  “Rick, your family’s cottage burned to the ground last night.”  Shaken, I asked him, “was anyone there at the time?”  He didn’t know.  My parents had been remodeling and winterizing the cottage whenever time permitted, mostly on weekends but sometimes during the week.  I called my father at work in Ohio.  “Yes, your mother was with me here when it happened.” I felt tremendous relief. But on the other end was not the dad that I knew–his voice was tight and flat.  He told me some kids had broken into the cottage and set it on fire. 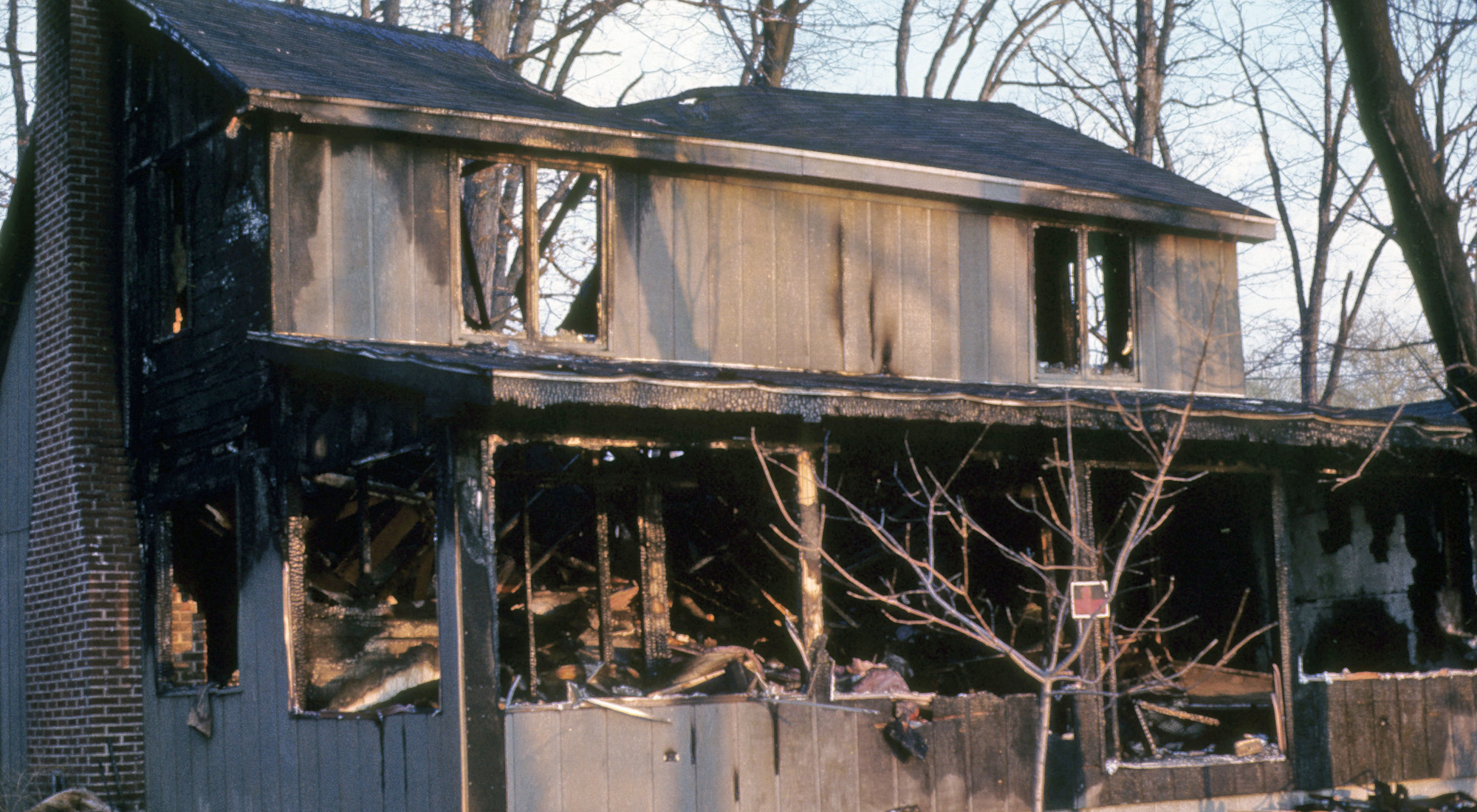 My great grandfather, William Preece, had brought the cottage into the family.  During my mother’s childhood, it was one of several rentals my great-grandfather owned. This one stood next door to the larger family cottage.  Later, my mother’s parents inherited it, and that’s how we came to spend summers swimming, water skiing, and loving Clark Lake.  So when fire destroyed the cottage, it seemed like memories also went up in smoke. The experience was tough on our family.

My parents wanted to rebuild, but Columbia Township seemed unsympathetic and were inclined to deny a permit.  That eventually changed, but they threw up other roadblocks.  One of them was refusing to allow a temporary trailer for housing in the backyard during the demolition and rebuild.

Neighbors stepped in. Howard and Shirley Burns offered use of their cottage while we, as a family, sifted through the remains of what was left of ours.  Jim Swain found my dad’s coin collection in the rubble.  Quite unbelievably a few home movies survived, but in damaged condition.  Some other items important to the family were retrieved.  But, there was no trace of the painting.

Below are some Clark Lake memories through the years, including the rebuilding.

At the time, it was tempting to think that those warm summer memories also went up in flames.  But that’s not how it is.  We hold memories in our thoughts and share them with those we love. No force of destruction can alter that.  And there were reasons for gratitude–no one was harmed, the help and well wishes of friends and neighbors overflowed, and some family memorabilia was rescued.  And like the structure that no longer exists, its replacement has its own set of memories of good times. 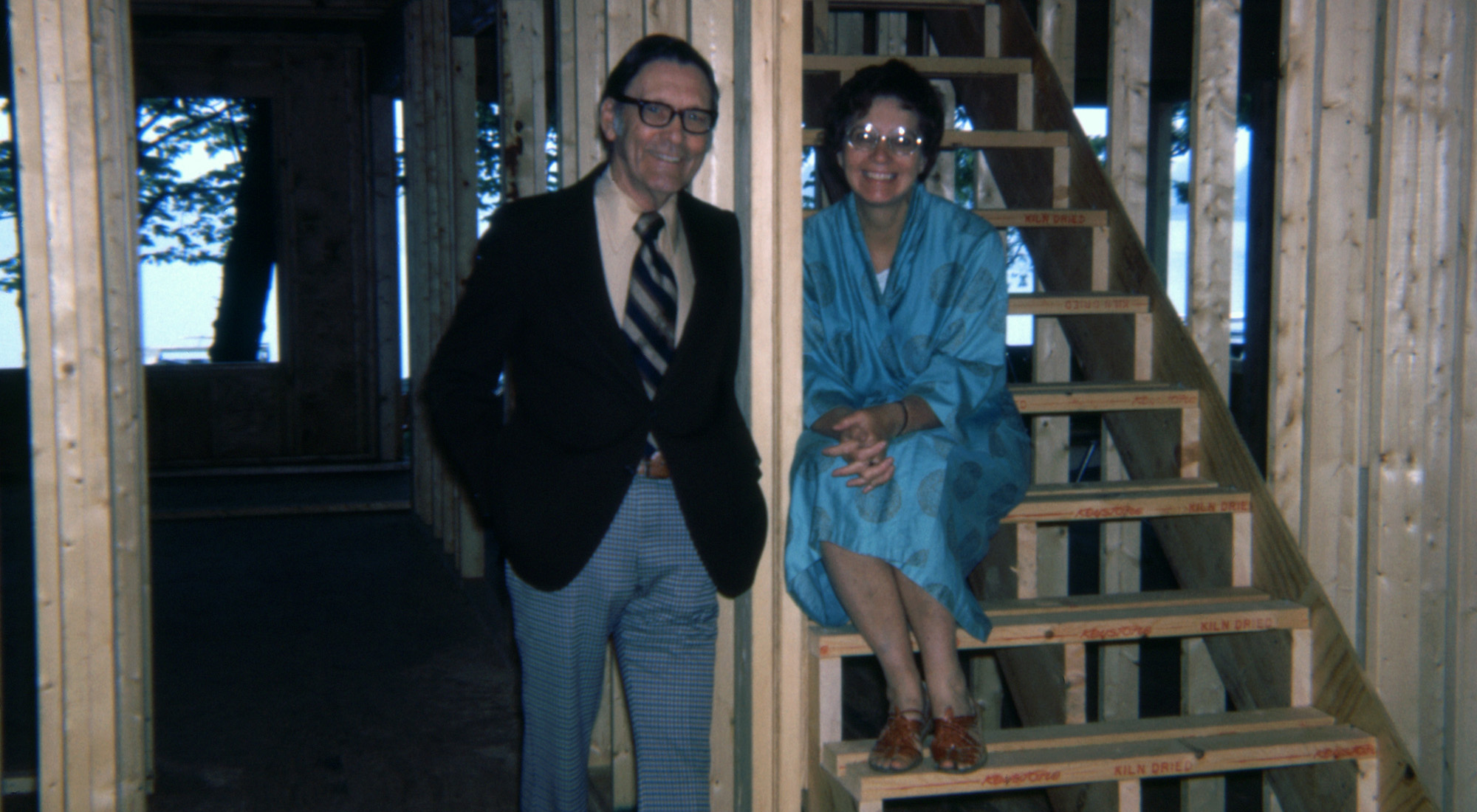 Through the miracle of Photoshop, here is a version of the painting I didn’t think was possible.  Using its magical tools, I was able to pull the painting out of my hands and let to stand on its own.  So, I now have a version of the picture that I wanted wanted dad to take, decades earlier in my bedroom on Barrington Drive. 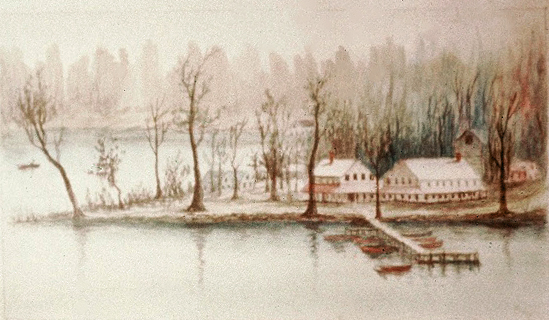 These photos of Eagle Point illustrate how its changed through the decades.

To read about another painting that no longer exists, click here for Clark Lake’s Crime of the Century.