The Great American Crab Races are taking the year off.  Scheduled for this July 12th through 14th, the crabs will resume their storied trek at the Beach Bar in 2021.

Anyone who has organized an event with lots of moving parts knows that uncertainty is the enemy.  The Crab Races do have many parts–sponsorships, prizes, scheduling staff, and the races themselves.  To the credit of the committee, the Crab Races run each year like a well-oiled machine.  Behind that appearance is putting those moving parts together in just the right way.  Calling it off at the last minute or leaving preparations to when there are further governmental decrees would be like pouring sand in your car’s motor oil.

Over the three day period, competitors crowd around the table and cheer their crabs (but don’t point or get the water bottle). There are over 600 participants plus observers. It’s the opposite of social distancing. Would there be some sort of high tech solution?  Perhaps.  But it seems the fun comes from being at the table urging your crab to beat the other guy.  Last year’s final:

The Crab Races are also a fundraiser.  Twenty-nine years ago, the objective was to defray the printing costs of the hardcover book about the lake’s history, Clark Lake, Images of a Michigan Tradition. More recent recipients include the Spirit Trail, Columbia School programs (like robotics), Napoleon Lions and Napoleon Athletic Boosters.

Mike McKay’s M-R Builder has been a sponsor from the beginning.  Scroll down for last year’s race program.  You will see just how many local businesses have also helped.

The Crab Races were the inspiration of the late Tom Collins and Bill Tuttle.  Over the years, many have worked on the project including some names you may know—Linda Reynolds, Ann Swain, Chris Holbert, Meredith Szostek, Pam Moore, Phyllis Pittman, Gary Morrill, Dick and Carman Tallman.

It is well to remember that events at Clark Lake like this one are put on by volunteers.  These individuals work hard, spend countless hours and sometimes their own resources to create successful events year after year.  They deserve our thanks–and our understanding. 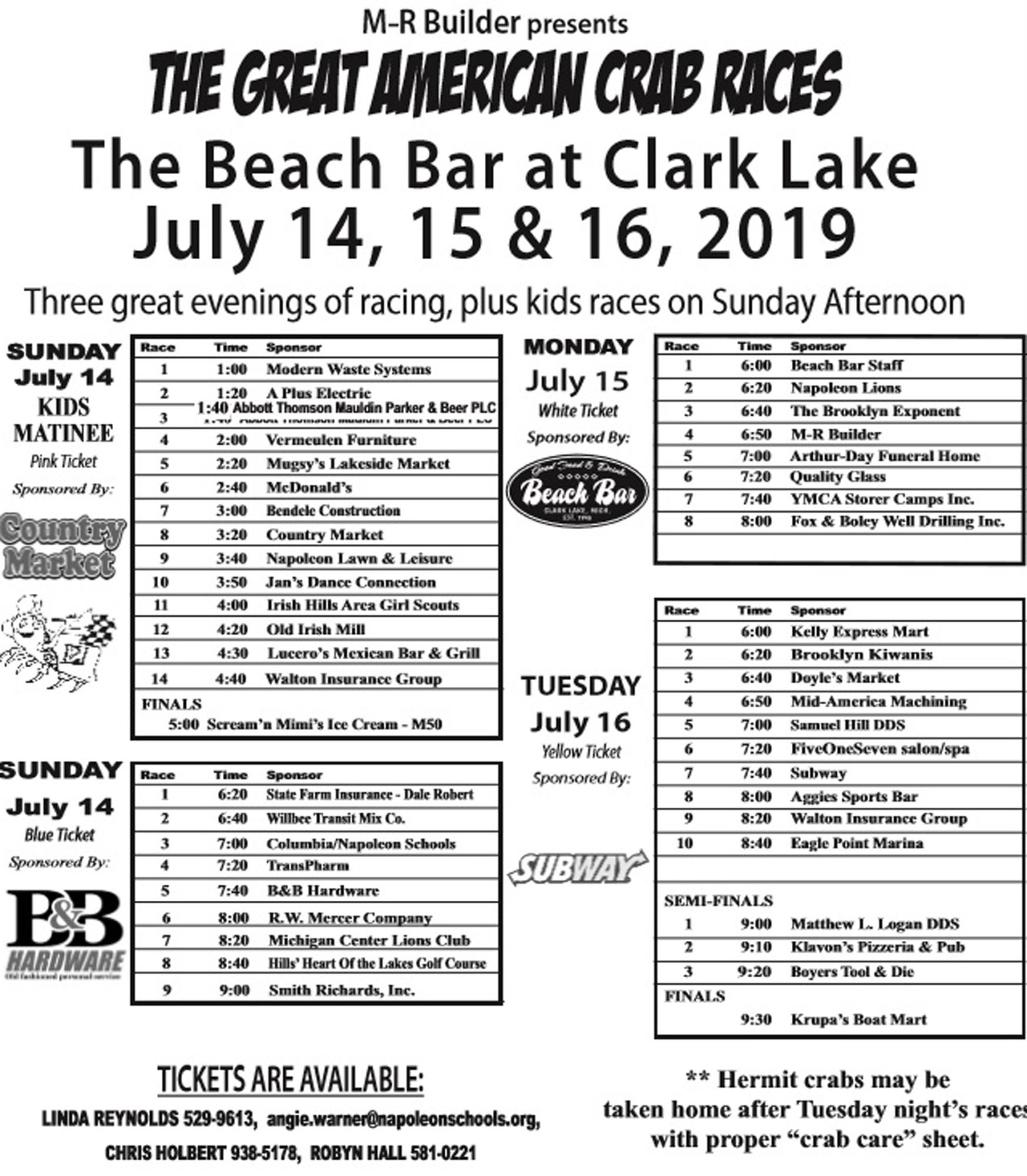