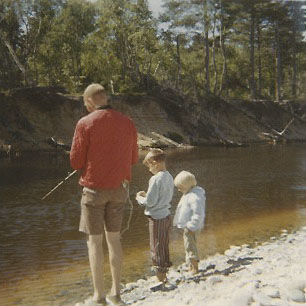 Sometimes it is hard to talk of the lost friends of our past, sometimes it’s so easy that we can’t stop the rushing of the words. Of all that comes to me about Jim Swain, what’s important is how much he gave to me, and how he fit into my life.

Jim and I enjoyed camping trips.  We had the fun of planning many, and some actually happened.  There were two major trips – at least relatively major for young men from Michigan in the 1960’s and 1970’s. It’s hard to believe now that those trips took place 40 to 50 years ago.

The first was a hiking and fishing trip to the Grand Tetons and Yellowstone. It consisted of a three-day drive out, four days packed into the Tetons where we ate freshly caught trout twice a day and explored the surrounding ridges and rivers. Then there were four days in Yellowstone seeing the geysers and the wildlife before another three days driving back. The second was the trip to the Grand Canyon.  These trips were significant for both of us. Living for two weeks or more in the confines of a two-man tent teaches you a lot about each other.

We had already become good friends before either of these trips took place. This friendship found its origins through fishing and water skiing on Clark Lake and canoeing on the Au Sable River out of Grayling. Although I had spent a few years in scouting, and spent some weekends at camp earning merit badges, I soon discovered that I knew little of the reality of staying in the woods – living on what you could carry in, gather, or catch. Jim taught me that – how to find dry wood during a rain-drenched canoe trip on the Pere Marquette or the combination of pleasures in freshly caught brook trout and freshly picked blueberries for breakfast on the Little Two-hearted River for example. 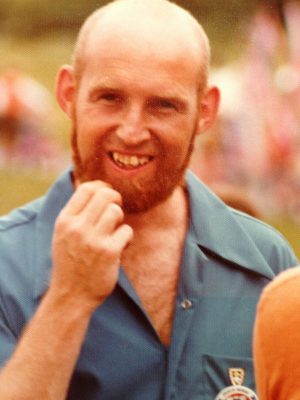 As mentioned in my book about my youthful summers at Clark Lake, The Clams Are Still Baking, I first met Jim when we moved from the Every cottage known as Seven Oaks, on the east side of Eagle Point, to the west side of the Point in the spring of 1956. That was our first year in the old cottage Dad bought from Mae (Schill) Jackman.  I was just 13. Previous summers, my playing partner at the lake had been my cousin Ralph Shawaker, known as ‘Bitsy’, a nickname his father had given him. At that time, the Fish family lived on Eagle Point Road, about half way up the hill from the old hotel.  For some reason that year, Ralph spent more time with Bob Fish while I ran with his older brother, Butch. Butch’s chief ‘partner in crime’ was a gangly redhead, a couple of years older than us, named Jim Swain. We spent much of that first year as a group of three and a group of two, who got together from time to time when we were on the water. It wasn’t many years before the two groups merged, and we stayed that way, to some degree, even after I graduated from college in 1965. Although, our various lives took us farther apart in later years, those friendships forged in the waters of Clark Lake always remained.

Whatever size of the group, Jim was the oldest, and usually the organizer of whatever we managed to get into – Butch was usually ‘second in command.’

In later years, the Lake knew Jim as, among other things, a talented jack-of-all-trades. He could repair nearly anything that needed fixing. Before newcomers started tearing them down and building mansions, there were innumerable cottages on the lake that had a room or two that were the result of Jim’s remodel. As a result of his long-standing friendship with Tom Collins, much of the Beach Bar is also a testament to his carpentry, plumbing, and electrical skills.  But when we were kids, his skills were more often seen in the construction of such things as frog spears, and cricket cages created out of whatever happened to be available in his Dad’s garage, behind their old cottage on Lakeview Drive. When we were remodeling our cottage in the fall of 1955 and the spring of 1956, my Dad taught me the fundamentals of electrical and plumbing techniques, but it was the ability to use these techniques to make something out of nearly nothing – the ability to adapt what was at hand to fill a current need, that I learned from Jim. It was in this group, far more than in school in Toledo, that I began to learn innovation and self-reliance, the ability to stand up and solve my own problems.

Somewhat to my surprise, in 1961, Jim became my brother-in-law – marrying my older sister Ann. This event didn’t change our relationship in detail, but it added frequency and strength to it. Of course to get to that day, he had been spending more and more time with our family; but by joining it, he became a permanent fixture. This was the period when we began exploring farther afield, with canoe trips to Northern Michigan, and driving trips to the west. This was also the period when we began to see his weaknesses as well as his strengths; after all, Jim was just as human as the rest of us. His opinions, as well as his stubbornness, could make him a bit thorny at times, and he never suffered fools lightly – and of course he had his own definition of who qualified. But he was always true to his principles and true to his friends – two more lessons that were acquired through my experiences with him.

Then in 1998, I finally met the woman who became my wife. For our simple ceremony in the front yard at the Lake, there was no more natural choice to be my Best Man. Once again, he 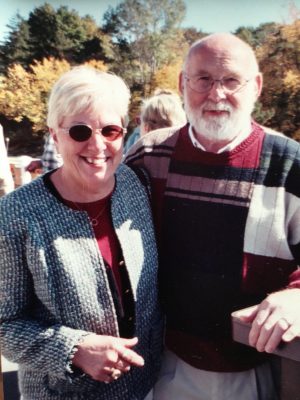 was there when I needed him, although he couldn’t wait to get out of the tux. He and Ann gave us a marvelous party before we slipped away to Niagara Falls – Joyce from Oklahoma had never been there. I had long since lost hope of finding someone who enjoyed so many of the things I did – whether it was hiking in the mountains or dressing fine to enjoy the Tulsa Opera, wandering through old antique stores and flea markets, or exploring the winery’s of as many states as we could. Joyce, like Jim, taught me much through our life together.

Although Jim left us in 2006, the first of our generation of family to do so, his influence on my life remain. He had fallen ill while taking Ann on a tour across the northern states, through the mountains to the sea, to show her the country he and I had explored so many years earlier – something he had promised her for years. Five years later, my wife joined him. Sometimes now, I think of the two of them, waiting for us atop some modest Colorado mountain, with the morning sunrise sparkling from the snowcapped mountains further west – just as he and I first saw the Tetons from Togwatee Pass.  And I know that, as they sip their fresh-brewed coffee, their voices rise in the laughter of simple joy in the beauties of the natural world.