This tribute is based on a Memorial Day salute on May 30, 2016.  It was part of an address given by Lynn VanWagnen, M.D. that he delivered after the parade on the grounds of the Clark Lake Community Church at the west end.  As he began telling Hop Anderson’s story to the crowd, Dr. VanWagnen thanked Nancy Anderson, Hop’s widow, for providing details.  As this tribute was part of the Memorial Day ceremony, Hop’s military service is highlighted.

Harold “Hop” Anderson was born in 1930 in Tecumseh, Michigan–the youngest of six siblings. His father and mother ran a grocery there.

At the age of 18, after graduating from Tecumseh High School, Hop and a friend went to the local Navy recruiter to sign up.  The recruiter was at lunch, but the Marine recruiter across the way invited the boys in.  They left that day having signed up for the Marines. 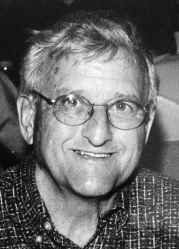 It was off to boot camp at Parris Island, South Carolina, then on to Camp Pendleton where Hop trained in drafting.  From there, Hop was sent to Coronado Navy Base where he trained in underwater demolition.  He spent some time at Fort Bragg, then back to Coronado.  There was a trip with buddies to Tijuana, where family legend has it Hop did his first Mexican hat dance.

He was then deployed to Japan and on to South Korea.  The Korean conflict was underway there, and he helped soldiers map escape routes to rescue captured colleagues in North Korea.

After Hop’s tour was over, he returned to Japan where he was awarded the rank of sergeant.  Once his four years of active duty ended in 1952, he returned to the United States.

Hop enrolled at Michigan State in 1953, where he spent six weeks.  Meanwhile, his parents had purchased the grocery store on the corner of Hyde and Vining from Dick Nichols.  His mom and dad were struggling with operating the store.  So the family decided that Hop needed to come home to help them with the business.

He married Nancy in 1957 and two children followed–Angela and Eric.

Here, the fond memories I have of Hops Lakeside Grocery began.  The long front porch where folks would sit and visit, the candy, the trips into the walk-in cooler remain strong with me. People of my generation remember his kindness, Hop’s smile, and his laughter. 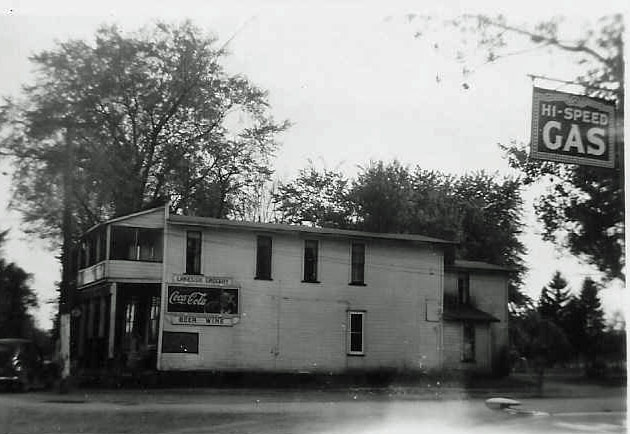 The store was definitely at a Clark Lake crossroads.  Just across the street on the north side of Vining was the Citi Service gas station.  Boaters pulled up to the dock on the lake and used the red wagon to haul their five gallon tank to the pumps.  And often there was a stop at Hop’s store for a treat, or perhaps to mail a letter–the Clark Lake Post Office at one time was located in the same building as the grocery.  That’s before it moved to its current location adjacent to Doyle’s.

Hop was active in the Clark Lake community as well.  He was a founding member of the Clark Lake Lions Club in 1965.  He was a member of the Tecumseh American Legion, where he directed the drill team for six years as drill master.  Community service didn’t stop there.  He was a Boy Scout Leader, a volunteer firefighter for 22 years, assistant fire chief, and volunteered at Allegiance Hospital for 15 years.

In the 1970s, he began as substitute mail carrier for Marion Reed at the Clark Lake Post Office.  By the late 1970s, Hops Lakeside Grocer had become a hobby for Hop–no profits.  So in 1978, he sold his equipment, and became a full time mail carrier upon Marion Reed’s retirement.

Today we salute Hop’s service to his country through his military career and for all that he brought to our Clark Lake Community.  Hop Anderson will be remembered by many, for many years.

Below are some Clark Lake memories from Raft-O-Rama 1974.

Hop is standing at the Raft-O-Rama raffle table.  Sitting to his right is is John Consolina, and standing to his left, is Tony Long. 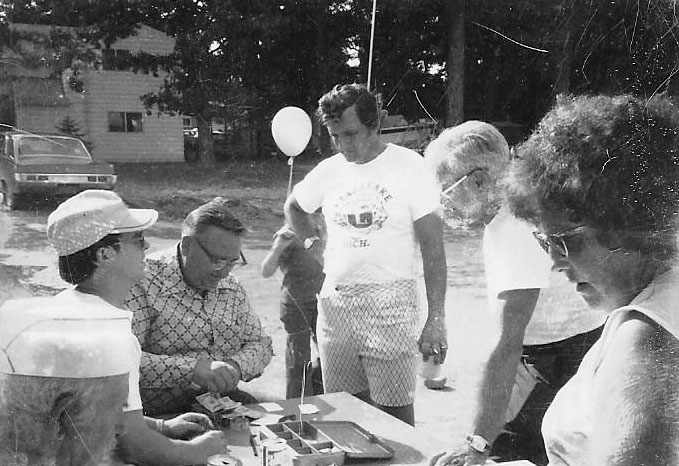 The Raft-O-Rama theme that summer was “advertising.”  Below is Hop’s team. 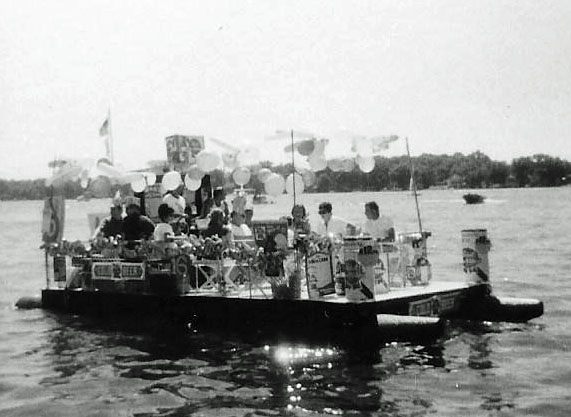 And being towed behind the raft is Hop and Nancy’s son, Eric, along with Mike Retter. 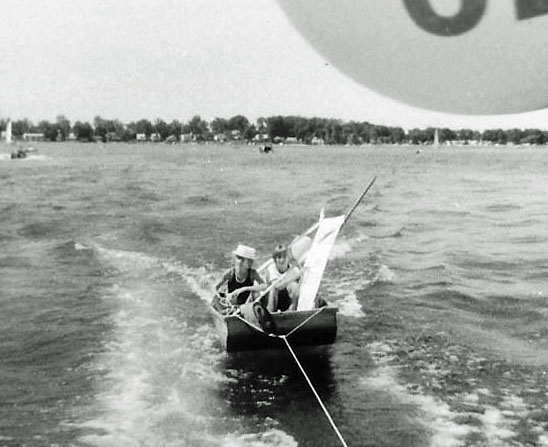