DNA testing confirms that an invasive weed is now present in the lake–the Eurasian milfoil and its hybrid.  There is urgency to this threat.  The invasive plant and its hybrid are known to multiply rapidly and make waterways unusable.  The most visible evidence at Clark Lake is at the County Park. 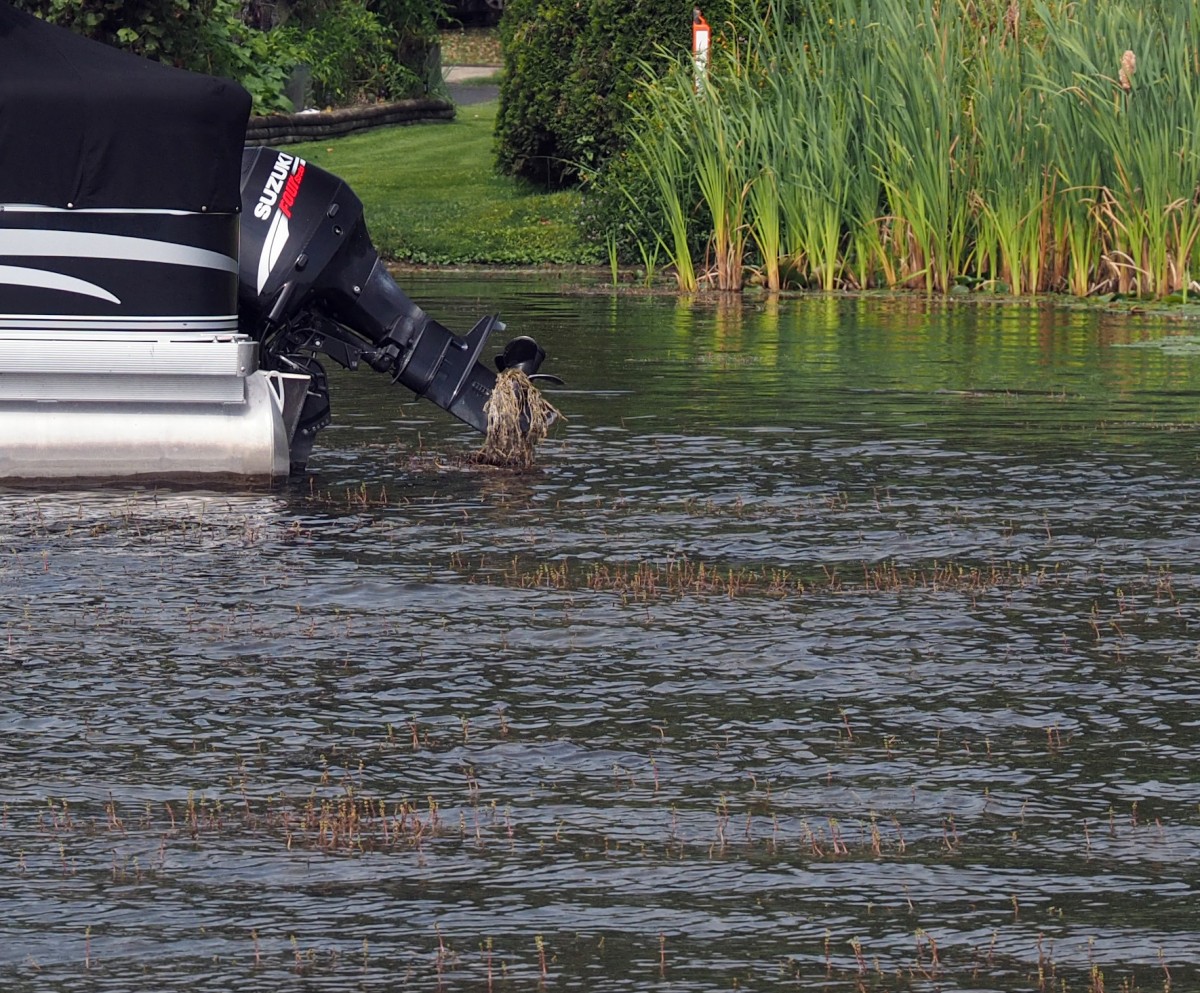 The invasive weed typically reaches the surface and destroys the usefulness of the affected areas. In areas where there is a lot of boat traffic, the tops are cut off. These tops then migrate to other areas and form new colonies.

Because this threat is deemed real and immediate, a group has formed to look into solutions–the Clark Lake Clear Water Committee.  On Friday, this group of 11 visited by raft, two of the three sites on the lake where evidence of the hybrid of Eurasian milfoil has been confirmed–the County Park and Hancock Point.

The group concluded that there is no perfect solution–each option has problems.  But all agreed that the problem needed to be addressed–now.

Options discussed were weed harvesting, bubblers, weevils, mats and herbicides.  Weed harvesting had the least appeal. When a harvester cuts the weeds, the clippings migrate to other areas and start new colonies.  Dr. Carley Kratz told the group that “just one small leaf” of the Eurasian milfoil or its hybrid was enough to trigger new areas of growth. Dr. Kratz, of the River Raisin Watershed Council, traveled from Adrian to join the others on the raft.  She was also part of a meeting held later at the Clark Lake Yacht Club.

A weevil that eats only the Eurasian milfoil or its hybrid has been successful at some lakes.  However, it now appears the only known supplier of the weevil is withdrawing from that business.  Another problem with the weevil is that bluegills and perch are fond of eating them, thus greatly reducing or eliminating their effectiveness in lakes where those fish are present.

Mats have been used to kill the invasive weed along with any other plant growth around it. Laying a 20 x 15 foot mat over an affected area cuts off light and deprives the weeds of the light they need for photosynthesis.  The weeds then die.  But when the mats are removed (or moved to another location), the first weed to reappear is the invasive species.  The large areas involved and locations in the middle of the lake are problematic to this solution.

One lake in Michigan found that bubblers eliminated the weed.  These bubblers are similar to what is used at Eagle Point Marina in the winter to keep ice from forming around their docks.  But there are definite infrastructure concerns about placing and maintaining bubblers in the affected areas.

Herbicides have not been thoroughly investigated.  There are a number of herbicides with varying characteristics, though they raise concerns with some people.

Research for the problem at Clark Lake is in its genesis.  All of the above options are being studied with the exception of weed harvesting.  And other solutions may emerge as this study goes forward.

The group was chaired by John Deming.  Others who were part of the initial meeting on Friday include Clark Lake names that you may know–people who have spent all–or many years–of their lives here at Clark Lake.  Like most readers of this website, they have high stakes in the future of Clark Lake.  The committee members attending Friday were John Calhoun (Columbia Township Treasurer), Vic Marshall (educator), Bill Tuttle (educator), Bill Leutz (chemical engineer), Ron June (school principal), Hugh Harris (secretary/treasurer of the Clark Lake Yacht Club), Flip Reynolds (Columbia Township trustee), Mike McKay (president of the Clark Lake Spirit Foundation and owner of M-R Builder), and Rick Belcher (editor/admin of this website).  John Deming, chairman, is a retired banker. While not from Clark Lake, Dr. Kratz, of the River Raisin Watershed Council, was also part of this group and provided unique expertise.  Thanks from the committee go to Ron June, and his wife Beth, for providing the raft for the excursion; and to Hugh Harris and the members of the Clark Lake Yacht Club for making their facility available for the meeting. 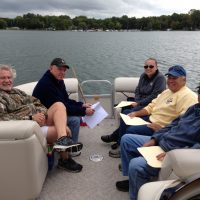 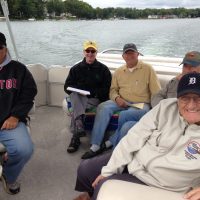 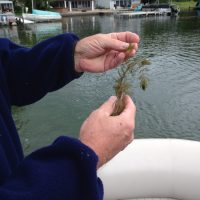 Native or an invader? John Deming examines a specimen

You can read about this problem at other lakes and learn about how they dealt with the problem on other websites.  For the links, click here.