Columbia Schools has recognized Police Chief David Elwell for his department’s work in keeping the keeping the schools safe.  Surrounded by school board members, Superintendent Pamela Campbell presented the award at Monday’s school board meeting.

The Chief’s family was on hand to watch the presentation.  Read further to see how the Chief has improved your view of Clark Lake, and how he helped solve a series of crimes early in his career. 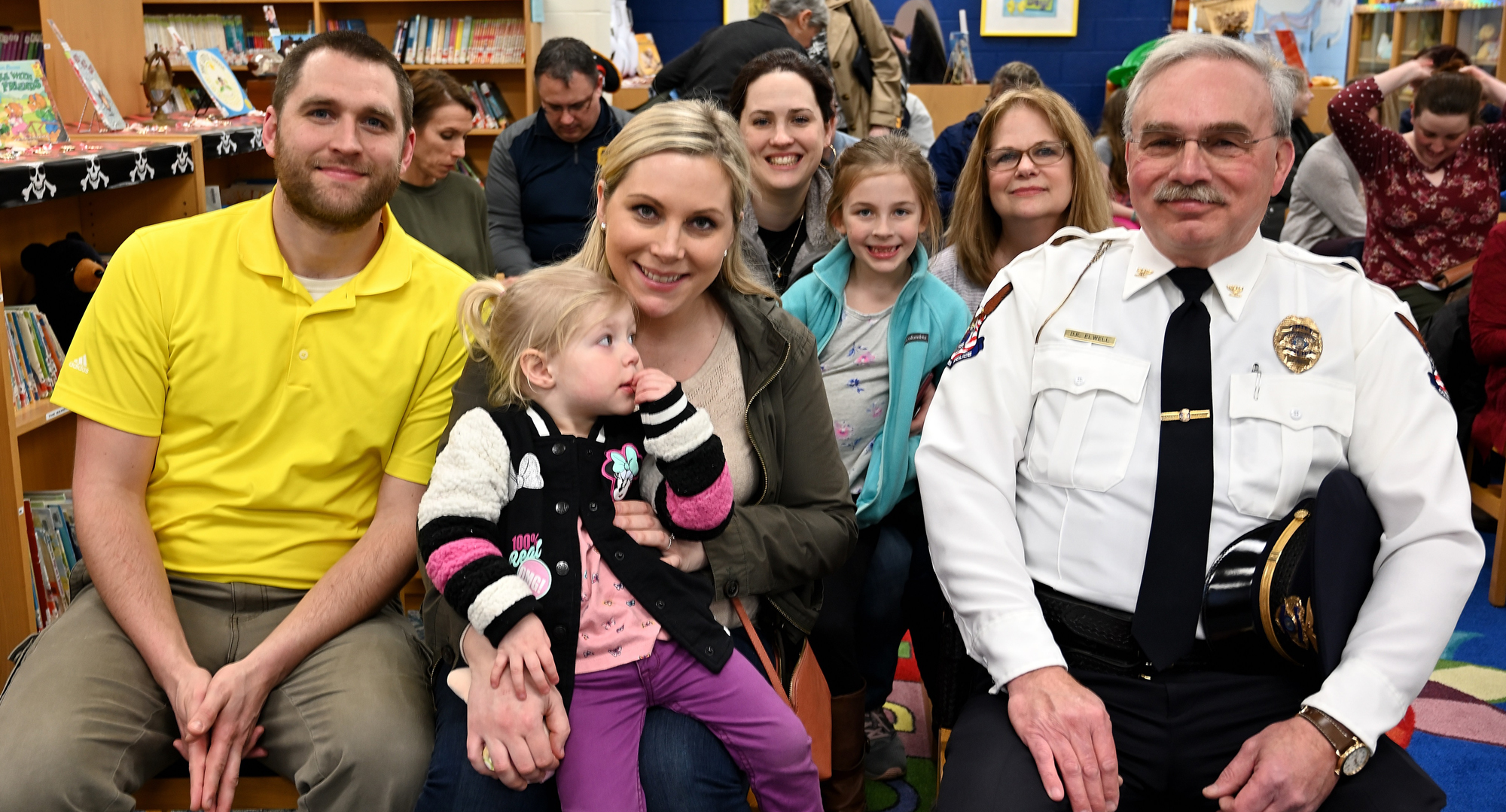 Chief Elwell is no stranger to accolades, and for good reason.  Those at Clark Lake can thank him for the installation of the SpiritCam in the Township Park.  The Chief supported the project which was funded by Mike McKay. Our police chief also invested considerable time and effort.  David Elwell arranged the purchase of the camera, and with the help of the Township’s Rick Church, mounted the camera in a favorable position so viewers of this website can get excellent views of the west end of the lake.  Without Chief Elwell’s help, the SpiritCam would not be providing this 24/7 service to Clark Lake. 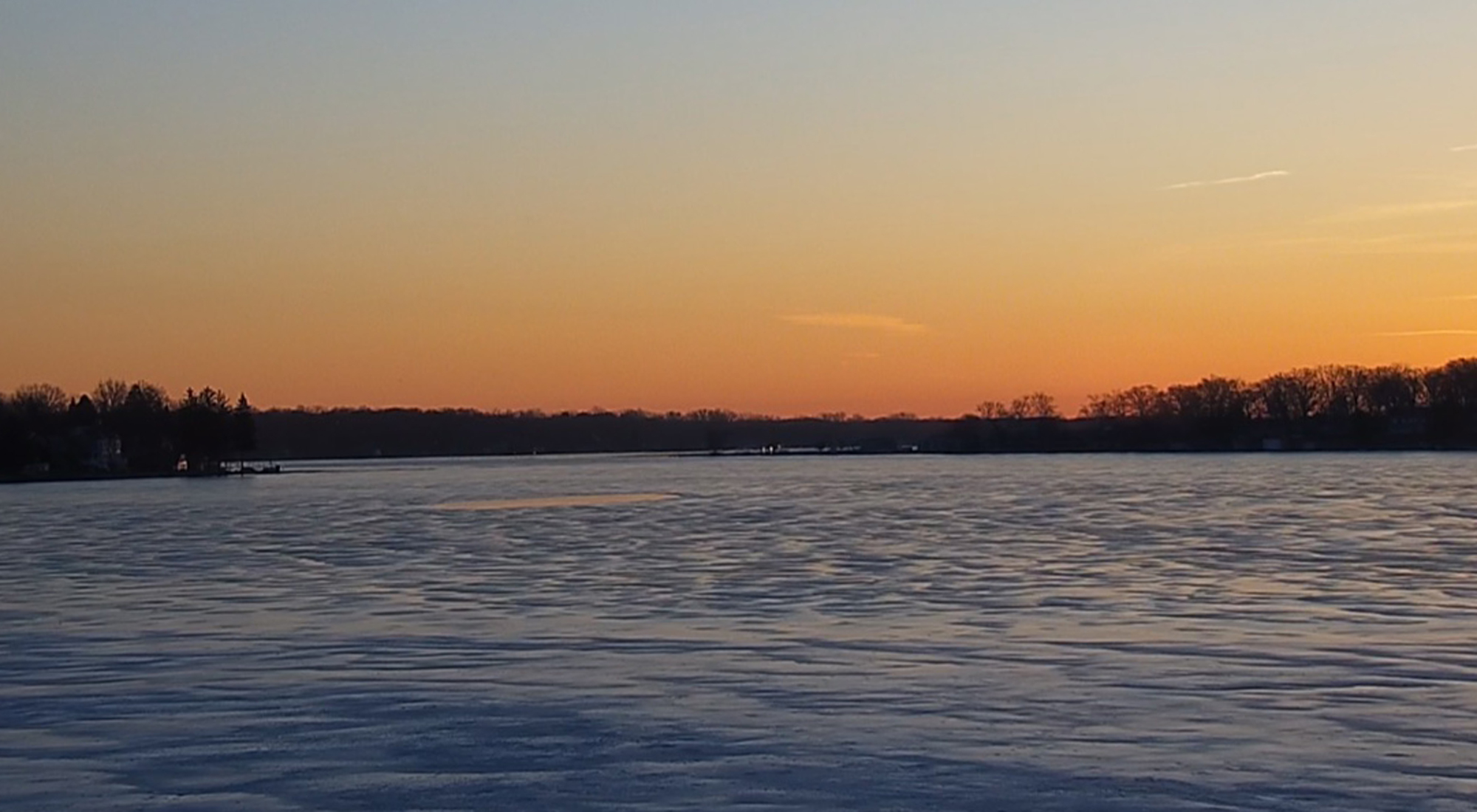 Early in his career, David Elwell discovered something that became valuable in his law enforcement work.  That something started with a perplexing quandary.  Someone had systemically gone from car to car at Jim Winter Buick, punched holes directly below the door locks, gained access, and removed the radios.  The person or persons had also hit dozens of cars at Jackson’s Ford dealership. As the investigator with Blackman Township Public Safety, it became David Elwell’s task to investigate the crime.  At the time, security cameras were not as prevalent as they are today.  That automatically diminished the prospects of an easy answer.

The solution lay in a basic truth—in law enforcement and other challenges, you are not a lone ranger.  Officer Elwell collaborated with  many other agencies, including the Michigan State Police, Jackson City Police, auto-theft units and local agencies all over the state.  Stopping the acts of an organized criminal demanded an organized response.

Through his contacts and by working with the Jackson officer investigating the theft, it was learned that a suspicious car had been spotted at a dealership in Grand Rapids with a license plate that could be traced.  The perp had been renting a vehicle from Enterprise during some of his criminal escapades.  Now, they had a suspect.  But how to develop a case that could be successfully prosecuted?

Criminals often leave a trail, and Michael Harris did.  He had fenced the stolen goods, and the investigators traced the transactions to Becks Wheels in Detroit. They eventually found Harris was hanging out in a rough part of Detroit.  Elwell, accompanied by Michigan State Police Detective Sgt. Edwards, knocked on the door, and a young boy answered.  Our future police chief was certain if they asked “if Michael were home,” they wouldn’t get a truthful response.  So, they said to the lad “can you tell Michael we need to talk to him”.  He was in fact there, and that ended the crime spree.

The investigation led to the solving of the crime and capture of the criminal.  But as he explains, “The solving of this crime, and many others by the same suspect, reinforced the high value of collaborating, combining forces, and working together.”

Columbia Township Police Chief David Elwell is leaving his position to run for Jackson County Sheriff, and he will be asking residents for their vote.  What is his goal?  The Chief says protecting the public, as well as ensuring the safety of the employees.  With years of successful law enforcement leadership, he intends to return the Department to its rightful role in the County.  On his agenda is to restore respect to and from the department.  Like most counties, Jackson County has overlapping jurisdictions.  He is convinced that he will be a moving force in creating more efficient, effective, and responsible law enforcement. 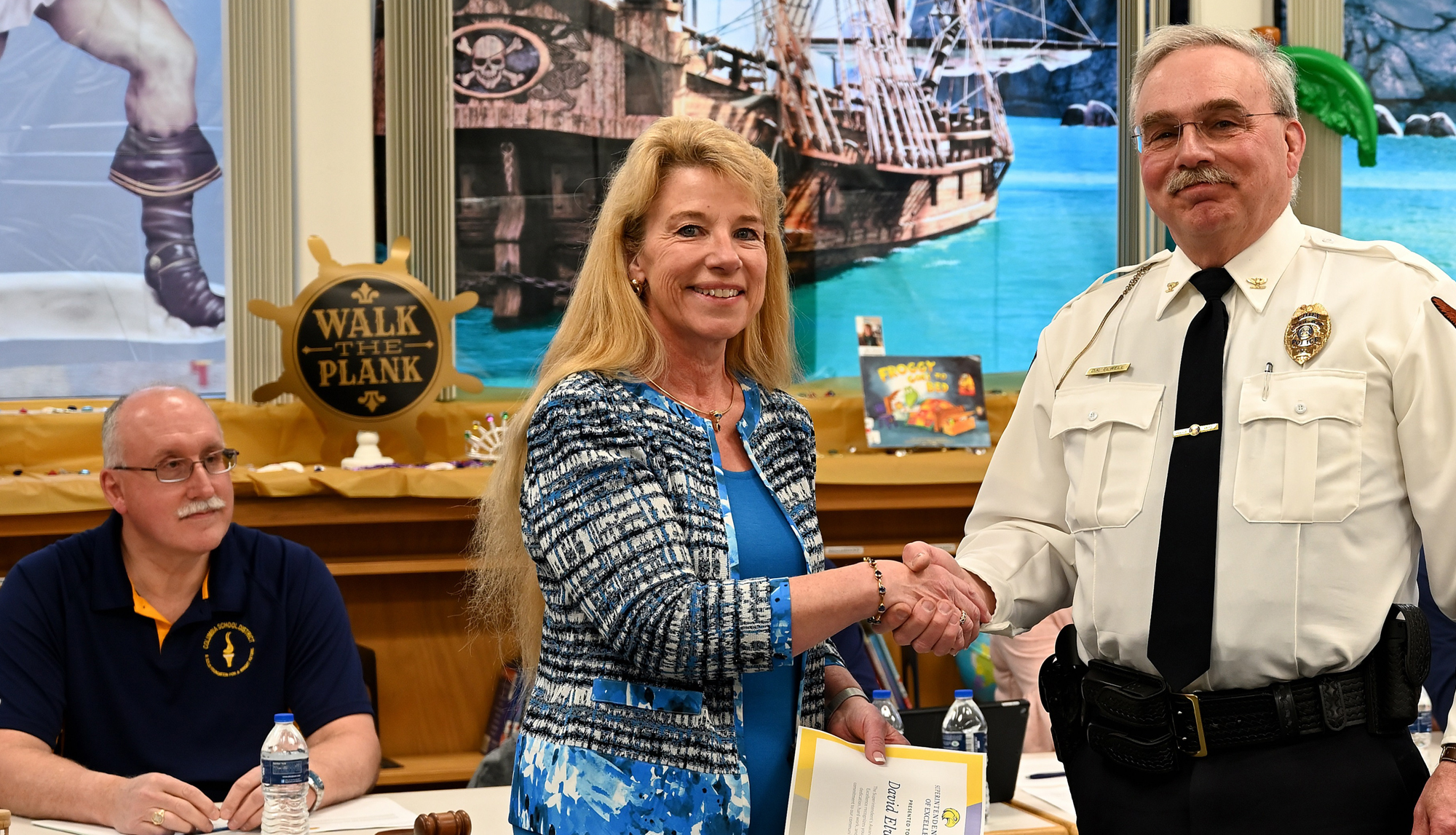 School Board President Robert Wahr looks on as Superintendent Pamela Campbell congratulates Chief Elwell.  The meeting took place in the library of the Columbia Elementary School in Brooklyn.